A Tribute to Nicola Cuti

I liked anthologies, writing a story where you never quite knew if the hero was going to come out successful or be devastated by his problems. I kind of liked knowing that you never knew if the hero or heroine was going to survive at the end. Excerpt taken from Nick Cuti's interview with Jon B. Cooke in Comic Book Artist # 12, March 2001.

Nicola (Nick) Cuti was a versatile writer, editor and artist who contributed to the comic book field for decades. His first professional scripts appeared in Warren's black and white horror magazines (Creepy, Eerie, Vampirella), where he also worked in an editorial capacity from 1969-1971. His next position was at Charlton Press, working as an assistant editor/writer. Nick soon received  recognition in fan circles when he created E-Man with artist Joe Staton, a satirical superhero inspired by Jack Cole's Plastic Man. This piece will focus primarily on his early work for those two companies. 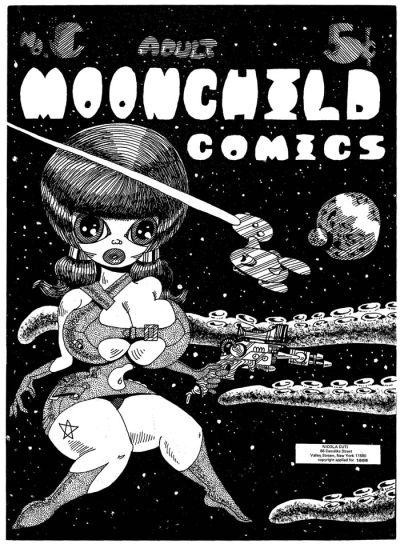 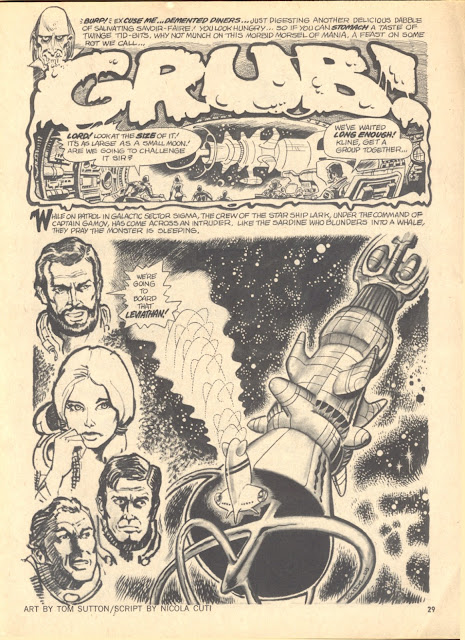 Cuti's first pro script appeared in Creepy # 28, August 1969, embellished by Tom Sutton, a quirky and distinctive artist who he often teamed with on numerous Warren and Charlton stories. 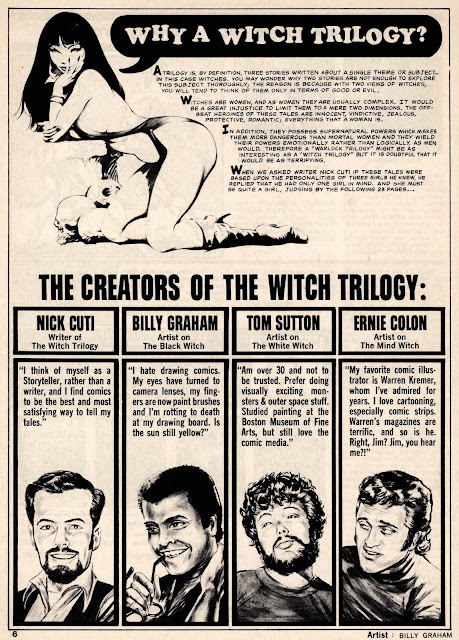 This introduction to an interconnected story by Cuti includes representations of the creators as illustrated by Billy Graham. Vampirella illo by Frank Frazetta. Vampirella # 7, September 1970. 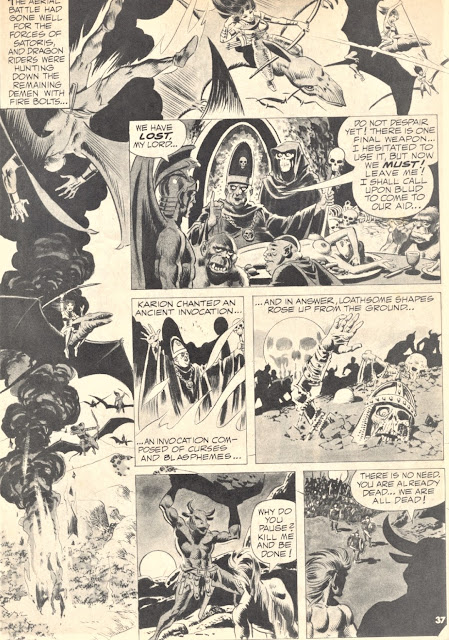 Cuti co-wrote the story "Prelude to Armageddon" with one of comics' recognized superstars, artist Wally Wood. His apprenticeship in Wood's Valley Stream, Long Island studio in the late 1960s, working alongside pros such as Syd Shores and Jack Abel was, in Cuti's view, an educational and highly-rewarding experience. Gaspar Saladino lettering. Creepy # 41, September 1971.

In 1971 Nick Cuti was hired by Charlton editor George Wildman to be his assistant, taking on the bulk of production-related chores and providing a supporting role to head writer Joe Gill. With great rapidity Cuti became a valuable addition to the Charlton staff. Cuti spoke with fondness on the benefits of working for Charlton, a company that had very little in common with the monolithic presence of Marvel and DC, who, in the main, focused on ongoing characters and superhero fantasies. Cuti explained in his Comic Book Artist interview:


..I loved working there because there really weren't any restrictions, just categories. If I, the writer, felt like scripting a romance comic, I could script a romance comic, or if I felt like writing a war comic or a horror story, or whatever, I would just sit down and bang one out. 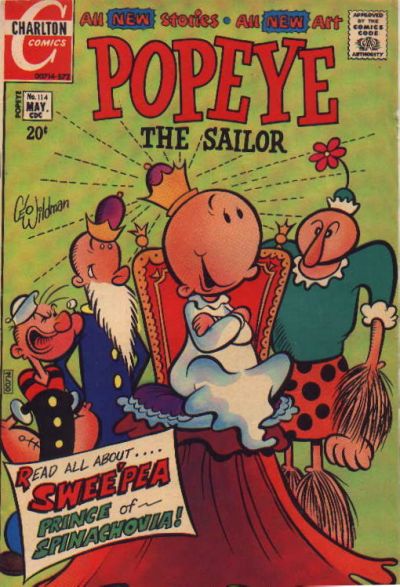 Cuti's first ongoing series for editor George Wildman was writing the adventures of Popeye, the beloved comic strip character created by E.C.Segar. The irascible sailor, whose exposure blossomed in animated cartoons, was recognized by both children and adults. Beginning with issue # 114, May 1972, Cuti's stories continued to be published long after he parted ways with Charlton (likely a backlog of inventory) until the books' demise in 1977. George Wildman cover. Image from the Grand Comic Book Database. 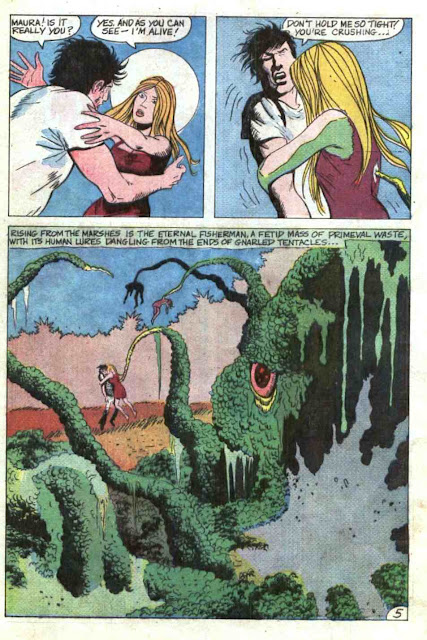 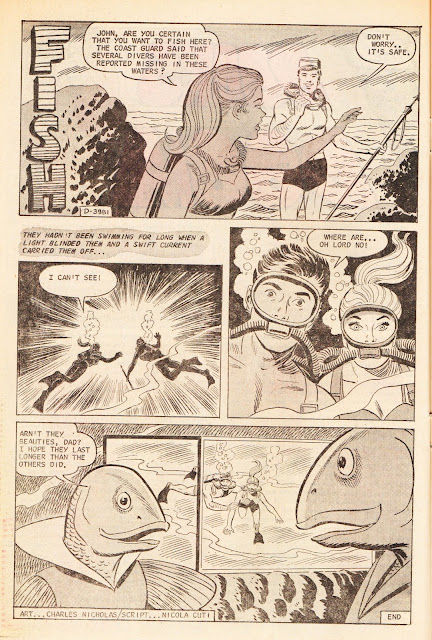 Charlton had its own idiosyncratic style which becomes more charming as the years pass, perhaps due to the rigidity of modern day mainstream comics. Here Cuti scripts the equivalent of a Haiku; one-page illustrated by veteran Charles Nicholas, and, while the rest of the comic is in color, this page was rendered in black and white. The Many Ghosts of Doctor Graves # 37, March 1973. 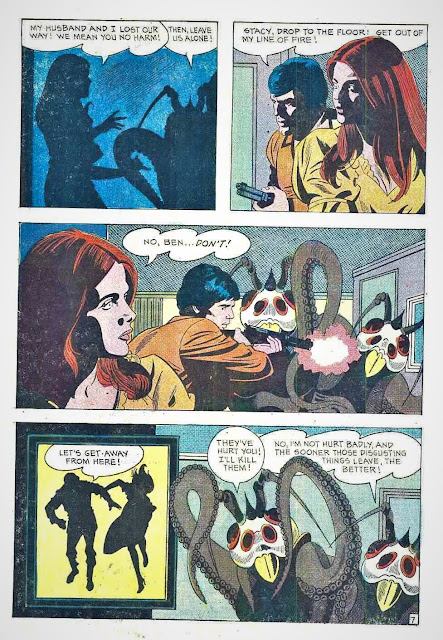 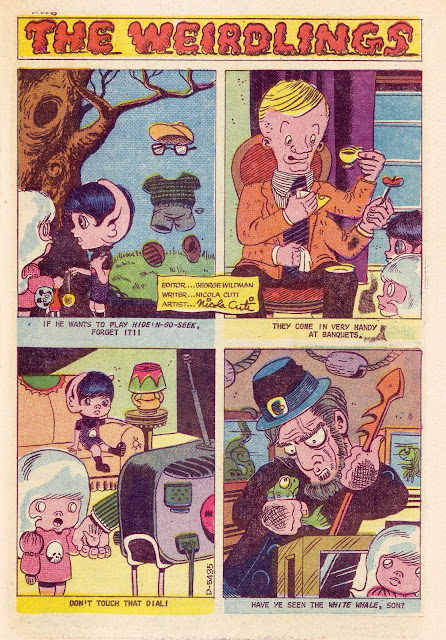 The Weirdlings was a bizarre humor strip created, written and drawn by Cuti that appeared in various Charlton ghost titles. Ghostly Tales # 107, October 1973. 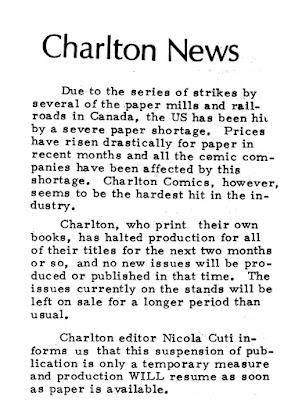 In addition to Cuti's freelance writing, as assistant editor he had to deal with production and publishing issues, including paper strikes which greatly affected Charlton. From The Comic Reader # 102, December 1973. 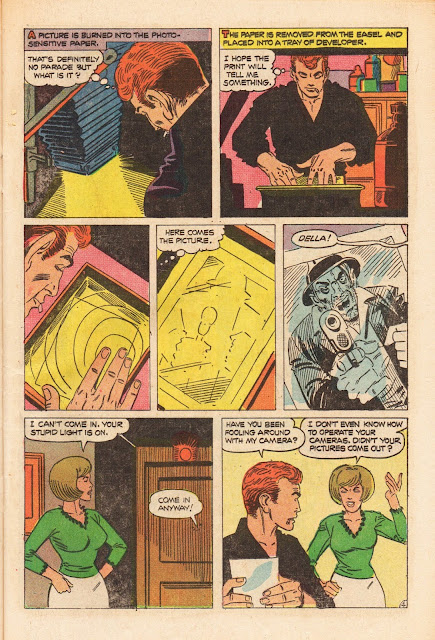 "Death in a Darkroom" was a natural story idea for Cuti, since his father was a technician who developed pictures for magazines including Life, Time and Sports Illustrated. Nick also dabbled in photography, which helped inform his own storytelling and pictorial sensibilities. Steve Ditko art; Charlotte Jetter letters. Ghost Manor # 21, November 1974. 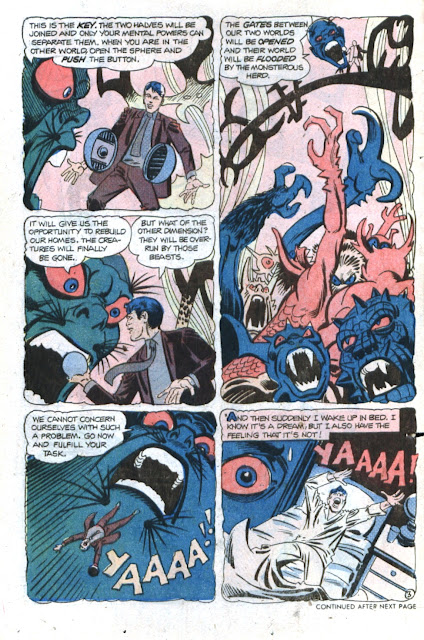 Steve Ditko illustrated quite a few Cuti scripted thrillers, two examples of which are seen above. Cuti first encountered Ditko when he worked at Wally Wood's studio and did the honors of picking him up at the train station. He explained:


Steve was tall, thin, wore glasses, and had a receding hairline, and a friendly smile. He was dressed in a long, black coat and fedora hat. As we drove to the Studio, he quipped, “So this is Valley Stream, but, Nick, I don’t see a valley or a stream anywhere.” 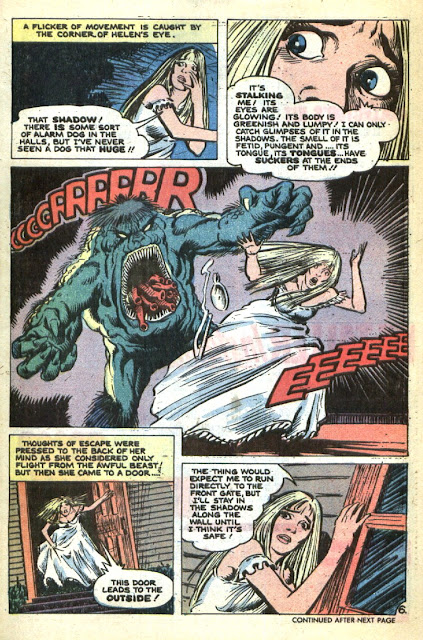 Cuti had a sharp eye for new talent and gave future fan favorites such as John Byrne and Mike Zeck their first professional jobs. In a few short years Byrne was the artist on the successful X-Men series, while Zeck illustrated many popular series, including Captain America, Master of Kung Fu and The Punisher. "Hades University," Scary Tales # 9, January 1977. Art and letting by Zeck. 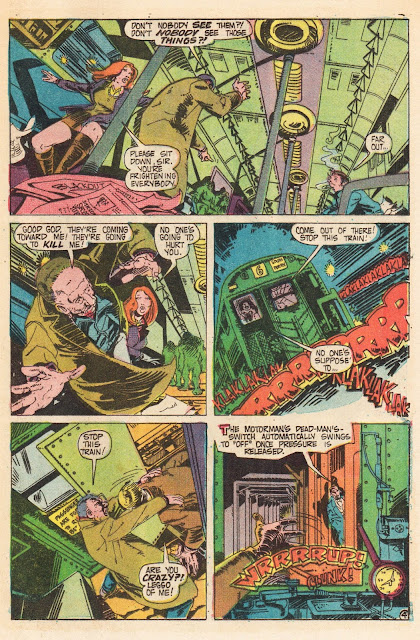 "The Thing in the Subway," Joe Staton art and lettering, Many Ghosts of Doctor Graves # 43, December 1973. 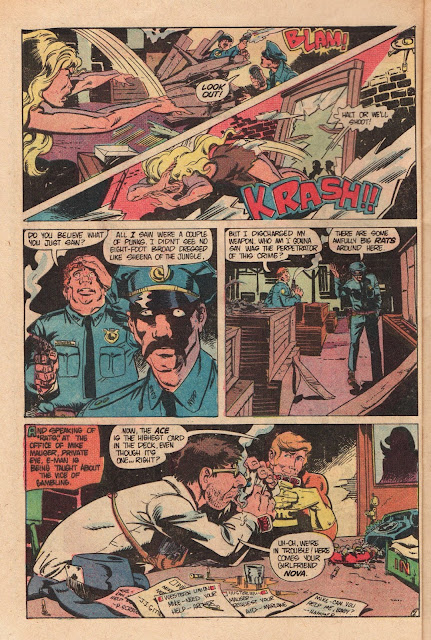 Mike Mauser, seen in the last panel, was a private eye parody who was visually patterned on Dustin Hoffman's Ratzo Rizzo. He debuted as a supporting player in E-Man and graduated to a back-up feature in Vengeance Squad. Cuti loved detective stories and film noir, which made Mauser a character he was especially fond of. If you peruse the scraps of paper littering the table you'll see a nod to Philip Marlowe, Mike Hammer and J.J. Gittes. Staton often added jokey bits of business for observant fans to seek out in his stories. "The Inner Sun," E-Man # 8, May 1975; Joe Staton art and lettering; Wendy Fiore colors.

Artist Joe Staton collaborated frequently with Cuti; the duo worked harmoniously on an array of mystery/horror/romance stories at Charlton. When management requested a new superhero title, Cuti naturally went to Staton for the visual presentation. Together they devised E-Man, an offbeat, lighthearted superhero comic that had an initial ten-issue run and was often revived by the creators.

Cuti left his editorial position and became a staff writer for Charlton until 1975 when he was let go. He continued to work in the industry, including writing for Western Publishing and in DC editorial. Cuti acknowledged that his most satisfying assignments were at Warren, where he freelanced until they went out of business in 1981. Cuti branched out to other media, including writing novels, working in animation and creating his own independent films. Despite these other activities Cuti never strayed too far from comics, and was accessible to fans through convention appearances, his website and Facebook.

Nicola Cuti rarely attained the attention or notoriety of his peers, particularly those who toiled in the high-profile, fan oriented world of superheroes. There may be a tinge of irony in the fact that if not for his creation of E-Man he may have been further marginalized. Cuti expressed little interest in larger-than-life personas, as he elaborated in his Comic Book Artist interview:


It's not that I have anything against superheroes, but they're just a genre as far as I'm concerned, and a good genre. But they've taken over, and that's the only objection I've had with them. When I was a kid I read Batman and Superman, just like everyone else, but not exclusively. They were just one of the things. I also read Lone Ranger and Captain Video and a whole bunch of other stuff. They were just one part of the whole thing.


Nick Cuti was a craftsman who found pleasure in telling stories in the comic book format; all types, which could be appreciated on many levels and by a variety of age groups. At Warren and Charlton he was given the freedom to let his imagination run wild, which often led to superior results. When outlets such as Charlton faded away, those creators who thrived in that environment were cast aside. Mainstream comics became fodder to an increasingly niche fan base, and the kid on the street with loose change in his pockets was abandoned. 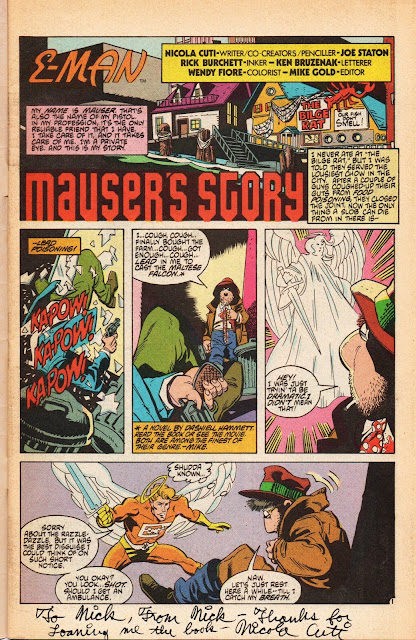 On a personal note, Nick Cuti was one of the first professionals I spoke with at length in the offices of DC comics around 1985. We chatted about creators I held in particular esteem, including Wally Wood and Steve Ditko, and he impressed me as a gentleman of great enthusiasm for his profession. From one Nick to another: you will be greatly missed.

(If you would like to read more on Nick Cuti and/or Charlton please see my featured post located on the upper right hand corner of this page).

Thank you, Nick, for a wonderful tribute! I have been a fan of Mr. Cuti's for decades especially his horror work so I really enjoyed this. All the best, Kimberlee

I'm embarrassed to say, Nick, that for years I assumed that Nicola Cuti was a female writer, and it was only in recent years that I learned he was a man. Not that it would make any difference to the quality of his writing, although I was unfamiliar with most of it, really only knowing him from E-Man, Michael Mauser, and perhaps one or two other comic stories on occasion. However, E-Man was part of my early teenage years for a while, and I'm sad to see a connection to my youth pass from this mortal vale. Nice tribute, and far more substantial than my own brief mention of Nick's passing.

Another great blog. I actually did not know that it’s for a scribes were done for the Warren books. That’s nice to know

That should be his first scripts

Thank you. Nick Cuti was a very talented individual and I'm pleased to shine a spotlight on him.

We're losing way too many of those talents we grew up with. Nick was a great guy and a talented writer and I'm glad to put a little something together to celebrate his career.

Thanks. Yes, Cuti did his first professional stories at Warren and worked with some talented artists.

Thank you for such a superb piece! I leant so much.

Thank you kindly. it was my pleasure to compose a tribute to Mr. Cuti.

Thank you for the kind words.

Thank you for this fine tribute to a great talent. Nick arrived on my radar when I picked up E-Man #1 from Charlton Comics fresh off the comic rack. I was thirteen at the time and this comic soon became a must buy for me as I found each new issue. A perfect blending of a skilled writer and artist, with the right blend of creativity and humor. I am so happy to have been a comic reader in those days of great variety (I loved Creepy, Eerie, Vampirella, Swamp Thing by Wein/Wrightson, Conan by Thomas/Windsor-Smith, underground’s by Bode and Corben, National Lampoon, The Spirit, EC reprints, Kirby’s Fourth World, Ditko’s Charlton and DC work, and Wood’s Cannon and Sally Forth volumes). I have enjoyed so much of his Charlton and Warren work through the years and I have purchased his Moonie, Starflake, and Captain Cosmos trade paperbacks also. I will miss his stories and I wish his family the best.

Thank you, unknown, for the kind words. It was my pleasure to pay tribute to Nick. I agree that we grew up in a very special period, with a plethora of incredible and diverse talent that is very much missed today.

“I had the privilege of doing “The Losers” for DC, a war story, and I put some real elements in there, some elements that I’d experienced, ... 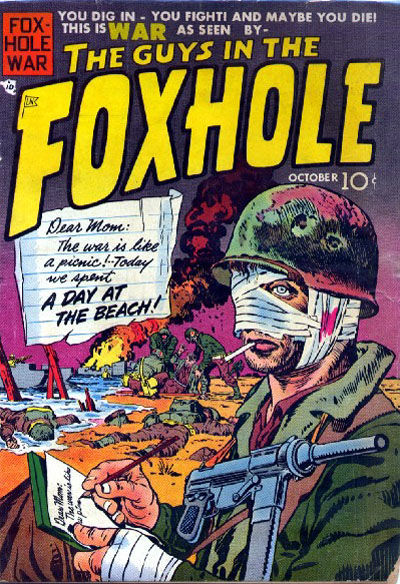