In my last post I displayed some new material pin-ups that appeared in Marvel's reprint titles. While going through my Marvel reprints (and indexing them for the GCD) I came upon another oddity, this time in a western comic. 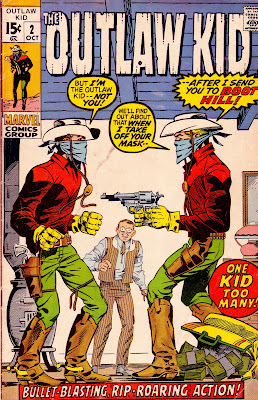 The Outlaw Kid was one of a number of Marvel westerns of the period. Others included the Ringo Kid, Mighty Marvel Western, Kid Colt, Two-Gun Kid, Rawhide Kid and Western Gunfighters, the latter two were the only titles then including new material (Rawhide Kid, like Sgt. Fury, then included new material every other issue. Obviously using reprints was a cost savings). At this point Marvel was reprinting a chunk of its Timely-Atlas product, not only in the westerns, but also in Where Monsters Dwell, Where Creatures Roam, L'il Kids, Our Love Story and My Love (which also featured new stories).

While going through my western reprint collection I came across a curiosity: a 2 page Outlaw Kid story that I was "certain" was pencilled and inked by Bill Everett. Doug Wildey was the primary artist on the Outlaw Kid stories of the 1950s, but Everett was also working for Atlas in the 1950s and my first inclination was to think this was a reprint from that era. 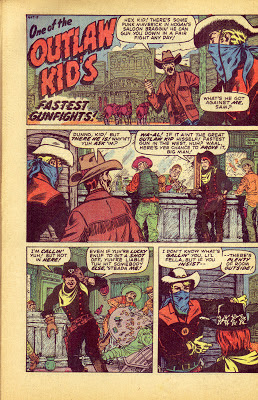 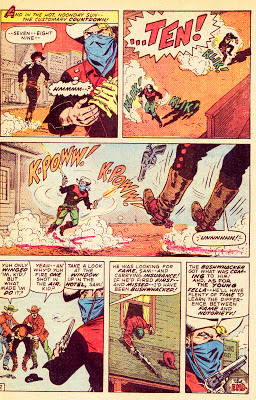 The page count was odd in itself. Most 1950s stories ran 4, 5 or 6 pages, with occasional 3 pagers, but this story was only two pages. The job number was also strange. The upper left side of page 1, panel one has the number 407-Z. I'm not an expert on job numbers, which were used in the production process of comics, but I do know they began with a letter first, then a three digit number, as in the reprinted Outlaw Kid story in this issue, "The Newcomers!" F-678.

My next step was to turn to my good friend Michael J. Vassallo, an expert on Timely-Atlas lore. I explained what I had found and he replied there was no such job number used in that period. He agreed it must be a new story. I sent him a scan and he confirmed that it was not a reprint.

Did I discover an unknown Everett story? The art very much resembled Everett's contemporary work. I checked on the GCD and they had Herb Trimpe credited as artist. Although I could clearly see Trimpe's figurework on the cover (which Everett also inked) I didn't detect anything that pointed to his pencils in the interior story. Everett was a very distinctive inker, but usually something noticable about the penciller remained. In this case I couldn't pick anything out. Jim Salicrup believed that Trimpe drew the story, but I remained unconvinced. Jim contacted Trimpe directly and he responded that he DID pencil the story, but there are occasions where an artist does not always recognize his own work. Trimpe was a busy artist in that period, drawing many covers and stories, so its possible he has made an error. My instinct still yells "Solo Everett", but there is no real way of knowing.

Further research proved that production numbers were used in this period, beginning with April 1970 cover dated issues and apprently ending with Nov 1973 cover dated comics. They were not always seen on the splash pages, likely for the same reasons they did not always appear in the past - they were covered up by art or lettering. Examples concurrent with the Outlaw Kid story include Captain America # 130 (340-Z); Silver Surfer # 18 (342-Z); "Did I Make the Wrong Choice?" from My Love # 7 (362-Z); Amazing Spider-Man # 89 (375-Z) and "Gargoyle Every Night" from Chamber of Darkness # 7 (377-Z). Need I add that these are all from original stories - reprints usually included the old job numbers on the printed comic.

So, why a new two page story in the Outlaw Kid? In this period Bill Everett was doing his share of inking at Marvel, especially over Marie Severin pencils*. The month Outlaw Kid # 2 was on the stands Everett inked the covers to Iron-Man # 30; Marvel Super-Heroes # 28 and Marvel Tales # 28. Everett was also probably coloring and writing the occasional script (on Sgt. Fury). so its entirely possibly that he produced a two-page filler for the Outlaw Kid. But Marvel could just as easily have filled those pages with in-house ads, so its still a mystery why new material was included. The only other place this could have been intended for was Western Gunfighters, a 25 cent title that featured a mix of new stories and reprints.

While the reason why this short story appeared in The Outlaw Kid # 2 may be lost to time, it remains another pleasant surprise hidden in the recesses of Marvel's reprint line. I hope I'll uncover more treats in the future.

With Thanks to Jim Salicrup.