I wrote, Marvel published BIG BOY Comics.  Later, Marvel stopped and Sol ( or someone else?)  took over the publishing,. I don't think I wrote any of those.

I believe Stan meant that Sol took over the packaging, not publishing, since it was only distributed to the Big Boy restaurant chains, not sold in stores, but note he did not say Martin Goodman packaged or published the later Big Boy's. While Stan says he doesn't think he wrote the later stories (1957 until around 1964) I suspect he did work on some of them; certainly the cover copy on many issues reads very much like his gags for the humor strips he wrote. I ordered a Big Boy comic through Ebay; when it arrives I'll try to decipher if Stan was involved in the story.

I mentioned to Stan that I thought Sol was not only a decent artist and inker, but an important contributor to early Marvel; someone Stan could rely on to get the work out and make sure everything ran smoothly (and also understood all aspects of the business). Stan replied:


Sol helped me with layouts and by getting photos for books like GOLFERS ANONYMOUS and BLUSHING BLURBS which I myself published.
Sol  was a tremendously great help to me as a layout man and production man and all-around assistant. He was the very best.
I wish Sol Brodsky was still alive to ask these questions to (and so many others about Marvel's early days), but some of the pieces of the puzzle are coming together.
More on Big Boy, and certainly Sol Brodsky, in future Blog Posts....
Posted by Nick Caputo at 1:31 PM 5 comments:

One of the exciting things about studying comics are the surprises that one constantly, and often accidentally, discovers. While I was adding credits to a number of Ditko drawn comics on the Grand Comic Book Database [http://www.comics.org/] I turned to the entries for Adventures of the Big Boy, (Ditko drew one issue in the 1990s). I was aware that Timely published a few issues, some drawn by Bill Everett, but I either had forgotten or never realized that the Big Boy comic continued to be package by Marvel staffers for many years. I was fascinated to see how many issues, though. The run seems to extend into 1964: the same period Lee and company were turning out superhero, western and teen romance comics, and some of those same people were writing and drawing Adventures of the Big Boy. Early issues were signed by Dan DeCarlo, and Stan Goldberg may have either drawn or colored some stories. The cover copy features gags that read very much like Stan Lee's concurrent work on Patsy Walker, Millie the Model, Patsy and Hedy and Modeling with Millie. The distinctive and charming lettering is clearly the work of Artie Simek. The man who was deeply involved in putting Big Boy together was none other than production man Sol Brodsky, as described in an article in Marvel Age # 22, Jan 1985, written by Dwight John Zimmerman:


"...Sol was not lacking in ideas which did work. One of his most successful projects was the Big Boy promotion comics. Big Boy is a regional restaurant chain based on the west coast. Sol put together a successful series of comic book giveaways for them, involving himself in every aspect of production - from the art to the packaging, even doing the writing on occasion. The scripting chores, for the most part, were handled by Stan Lee, who had long since become a close friend as well. On occasion Sol would ask Mike Esposito to help him on the inking.

"Sol loved doing Big Boy, Selma (Sol Brodsky's wife) said. "It was simple, it was fun and it was cute. He had a statue of Big Boy that sat on his desk that I'd see every morning when I got up. "That was a big part of our life, Janice (Sol's daughter, Janice Cohen, who would go on to become a colorist), said. "When we took our trip out to California, the big event was to actually go in and eat a Big Boy hamburger!"

(special thanks to Dusty Miller for tracking this information down. It creates a clearer understanding of Brodsky's importance to Marvel and his role as a businessman).


With Brodsky packaging the series, drawing, occasionally writing, and employing Stan Lee, Artie Simek and likely Stan Goldberg to produce the interiors, he orchestrated a lucrative outside job for many years. After learning the information of Brodsky's involvement, I suspect Big Boy was actually an outside project, one Goodman had nothing to do with. If that was the case Brodsky was able to fully profit from the comic (with Lee, Simek and others also making extra money).

So, after all these years I've discovered that alongside the Fantastic Four, Spider-Man, Hulk, X-Men, Rawhide Kid and all the other titles, Brodsky, Lee and company were also packaging Big Boy stories. It shows how resourceful many creators in that period were. 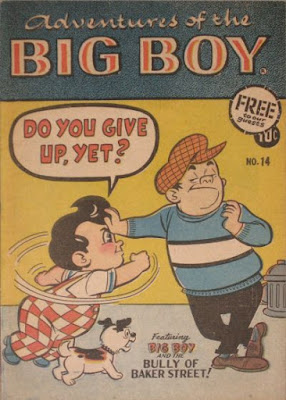 Adventures of the Big Boy # 14, 1957. Dan DeCarlo art ?; Artie Simek lettering. Packaged by Sol Brodsky for Webs Advertising Corporation. Brodsky produced other giveaways, including industrial comics for Bird's Eye and books with Stan Lee, including Golfer's Anonymous. Mr. Brodsky was not only a decent artist and solid inker, but a smart businessman. I'll be writing more about him in the future. 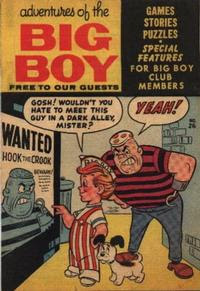 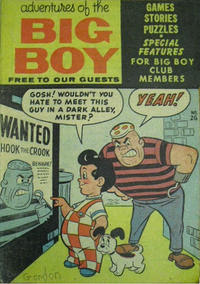 Until 1969 two different versions of the Big Boy comic were produced, one for the east coast and another for the west coast. As can be seen above, they are differentiated by a thinner, blond-haired big boy on one cover in contrast to a heavier child. Hair and outfits are also altered. Art on both covers is likely by Dan DeCarlo, with lettering by Artie Simek. Thanks to Robert Thomas for the info.

Brodsky appears to have packaged these stories for the company for around 8 years, from 1957-1964. 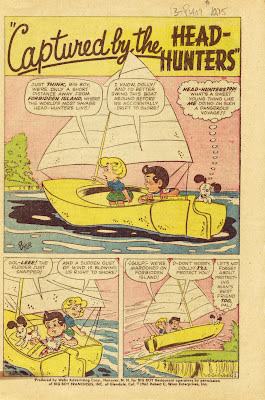 After writing this blog I was able to purchase an issue of Adventures of the Big Boy on Ebay. Above is the splash page to issue # 66, dated 1962. "Captured by the Head Hunters!" is signed "Brod", which is the way Sol Brodsky signed some of his Atlas stories. The story is likely written by Stan Lee and lettered by Artie Simek, with possible coloring by Stan Goldberg. There is a total of 8 comic pages; the opening story is 5 pages, along with a 2 page Nugget story (Big Boy's talking dog); followed by a one page Big Boy strip. The back cover has a solo cartoon of Big Boy, with the bottom half advertising the local Big Boy franchises. The remainder of the book includes letters and game pages.

An article on Giveaway comics that appeared in Comics Buyers Guide provided some background information on the series, including a talk with Stan Lee:

Some Timely help. To learn the ropes of comics publishing, Bernhard sought the advice of Martin Goodman, then president of Timely Illustrated Features, precursor to today's Marvel. Production of the first year of the series was farmed out to Timely in 1956, where most of the stories for The Adventures of the Big Boy #1-12 were written by none other than Stan Lee, later the co-creator of Spider-Man, The Hulk and The X-Men for Marvel Comics. Stan and I would go out to his house in Long Island and plan the issue, Bernhard said. He was the writer on the first issue.

Lee recalled working on the series. "I did a lot of them, he said. Manfred was a nice guy. I really considered him a personal friend." Lee said that the project was unusual for Timely, which mostly produced its own comics for sale. "We did a few giveaway comics for political purposes, we did a number of things for charity. But I think Big Boy was the only one we did where it wasn't a Timely-labeled book. We may have done things for General Electric years ago, but as far as I remember our names were in the indicias" he said. I may not have signed my name to the Big Boy work."

Timely artists supplied the art for the series during that year: Bill Everett, creator of The Sub-Mariner, drew the covers and stories for the first two issues, Bernhard said. Sol Brodsky, artist and later Marvel's production director, worked on issues during the middle of the Timely run, around issues #3-6. Lee speculated that such other cartoon-style Timely artists as Dan DeCarlo, Stan Goldberg, or Mike Sekoswky may have worked on later issues of that run; Bernhard recalled DeCarlo having worked on issues between #7 and #12. Unfortunately, complete credits were not included in all issues.

Four decades of artists. Following the auspicious start of Everett, Brodsky, and DeCarlo, Big Boy went through a series of artists, as Bernhard took over production and some of the writing for the series with brother Karl as editor with issue #13.

The compete article can be read here:

I suspect Lee and Manfred have some dates wrong, since the stories were clearly packaged past 1957. Nevertheless, Lee was correct that Marvel did do other giveaway comics, including a political comic. 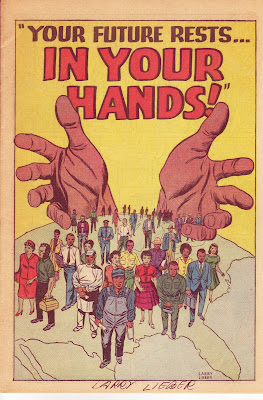 I discovered this comic a few years ago at a convention and immediately bought it, fascinated by the Larry Lieber signature. The indicia reads: "Copyright 1964, National Association for the Advancement of Colored People". Goodman packaged this 16 page comic book (covers were not slick; they were the same quality as the interiors) for the NAACP, encouraging African-Americans to register to vote. This comic was likely distributed in schools and churches. I was able to show this comic to Larry Lieber at a convention appearance and he immediately recalled that he worked on it. I don't recall if he said he wrote the story or Stan did; I would veer towards Lieber, based on techniques he employed in the fantasy stories (see below). Marie Severin likely did some touch-up work on a few pages. 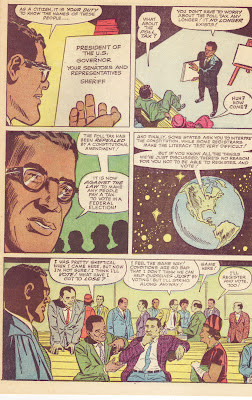 Page 9. Note the word balloon in panel three pointing to the Earth, a device Lieber employed in stories he wrote for artists in Goodman's fantasy line (Strange Tales; Tales of Suspense; Tales to Astonish; Journey into Mystery) and later continued on his own scripted and drawn tales (Tales of the Watcher, fantasy shorts).

This comic is not only an interesting oddity in Marvel's early years, it's also a cultural artifact of the times. I wonder how many other promotional comics are out there waiting to be discovered?