Dick Ayers passed away on May 4th, 2014 at the age of 90. As a comic book artist he was always a solid, dependable craftsman. As a person he was a class act. Dick was the first pro I ever interviewed and he was both patient and gracious. Over the years I had the pleasure of seeing both him and his lovely wife Lindy often at New York Comic Cons, and was thrilled to be a guest at his house on several occasions with fellow friends and comics scholars  Barry Pearl, Michael J.Vassallo and my esteemed brother John Caputo (AKA The Yancy Street Gang). Dick had a wonderful display of original artwork on his walls and in his studio, and it was an absolute delight to listen to his stories about his comic book career. One of the most amusing anecdotes Dick told was recounted in Barry Pearl's article about our visit ("The Yancy Street Gang visit Dick and Lindy Ayers"; Alter Ego # 90, Dec 2009). Once when Dick's young daughter was in school students were asked what their fathers did for a living. His daughter innocently answered: "My daddy draws monsters". The teacher thought his daughter was fibbing and called the parents in. Needless to say, Dick had to explain that he WAS gainfully employed drawing (or more precisely inking) monsters! 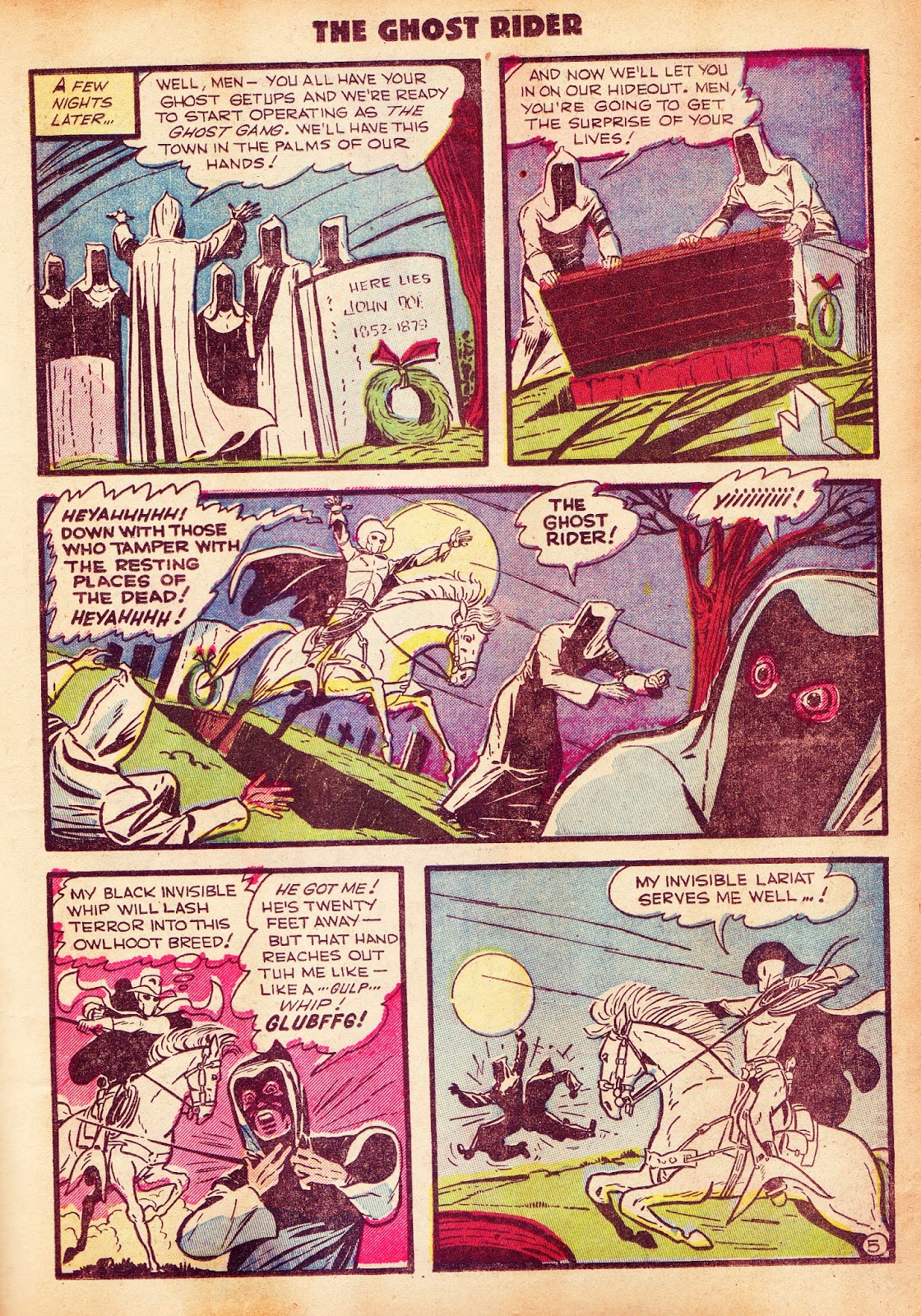 "The Greedy Ghosts of Boot Hill", Gardner Fox story, Dick Ayers art and lettering, The Ghost Rider # 4, 1951. Created with Publisher Vin Sullivan and writer Ray Krank for Magazine Enterprises, The Ghost Rider was Dick Ayers' signature character. Dick's Ghost Rider design was a perfect blending of simplicity and style. Clad in white with a skull like mask and eye sockets that predated Spider-Man's, the western hero would remain a top-seller for years. 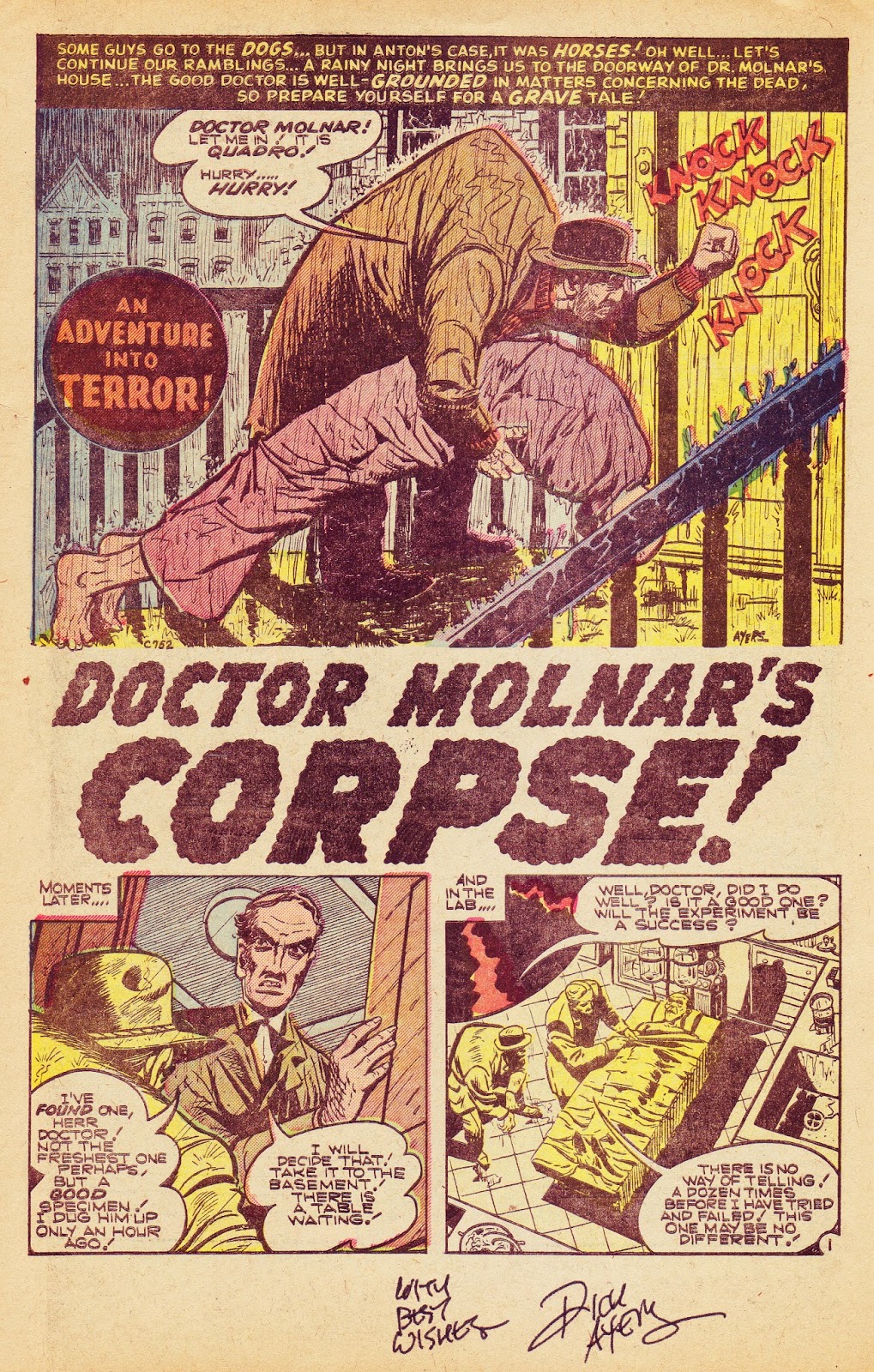 "Doctor Molnar's Corpse!" Author unknown; Ernie Bache inks, Dick Ayers art and lettering (Dick always lettered all the early stories that he or Ernie Bache inked) Adventures into Terror # 21, July 1953. Ernie Bache assisted Ayers from 1952-1954 and his inking added a layer of depth to the finished work. Ayers spoke highly of Bache's contributions in an interview published in Alter Ego # 10:

"He would put on all the blacks and the Kraft-Tone and bring in all that stuff. So we made a good team. I didn't bother throwing in heavy blacks. I would start them, maybe, but then he would accentuate the lines I'd put in, make them a little stronger. And he was very meticulous in his approach. I mean, everything had to be a certain formula so that we could knock out four pages a day, so he was a good asset for me."

Ayers produced many exceptional horror and mystery stories, particularly in the 1950's . This is one of a number of books in my collection that Ayers signed. 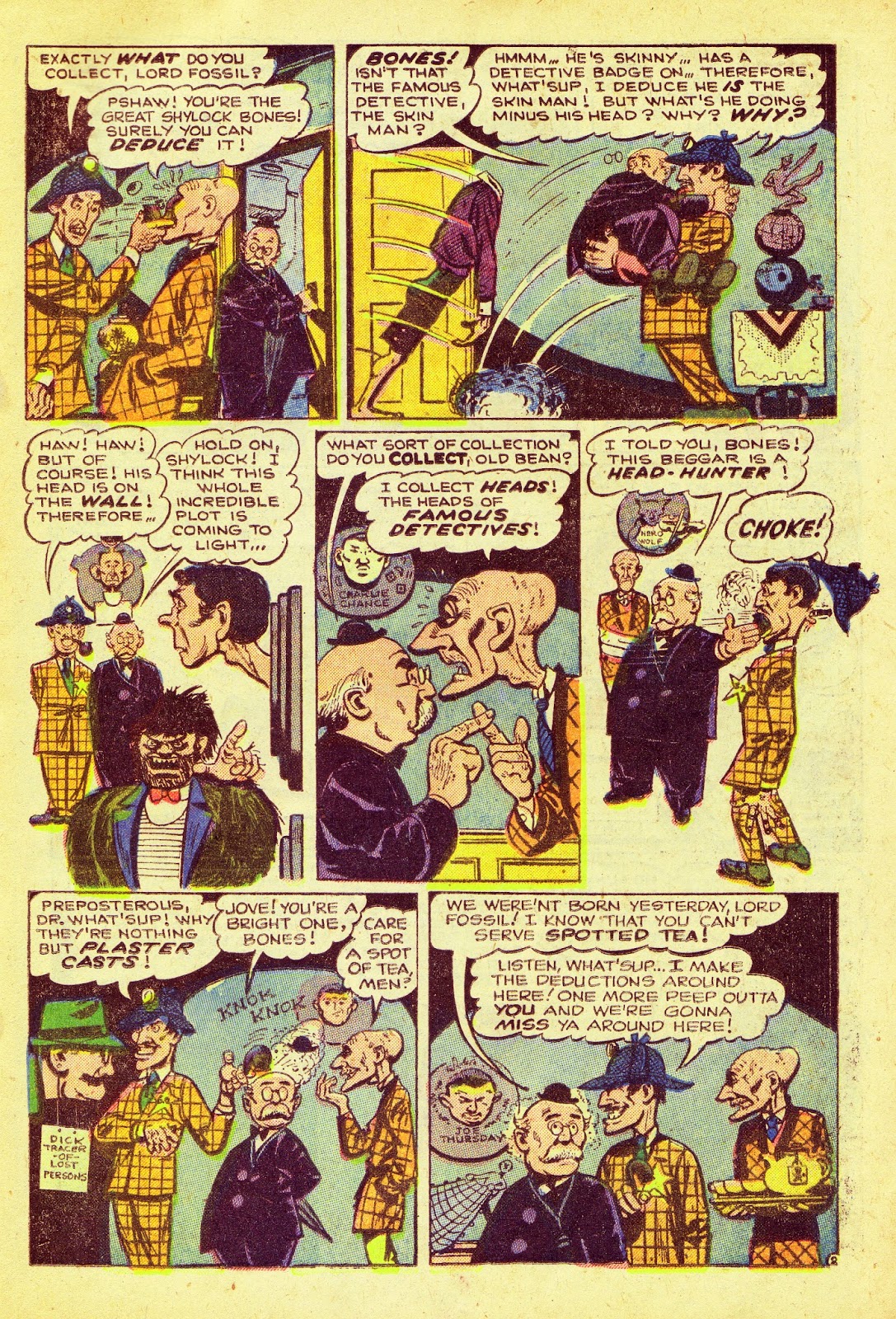 "... I was heart-broken that I lost Jimmy Durante, because I loved drawing him. That was the style I would have loved to keep, because you could tell adventure and you could also be funny, like Roy Crane. Then when they started up the westerns, I found out, boy, did I love doing those! [laughs]"

Oddly, when Marvel produced their superhero/parody comic Not Brand Echh in 1967 Ayers was never asked to draw any stories. 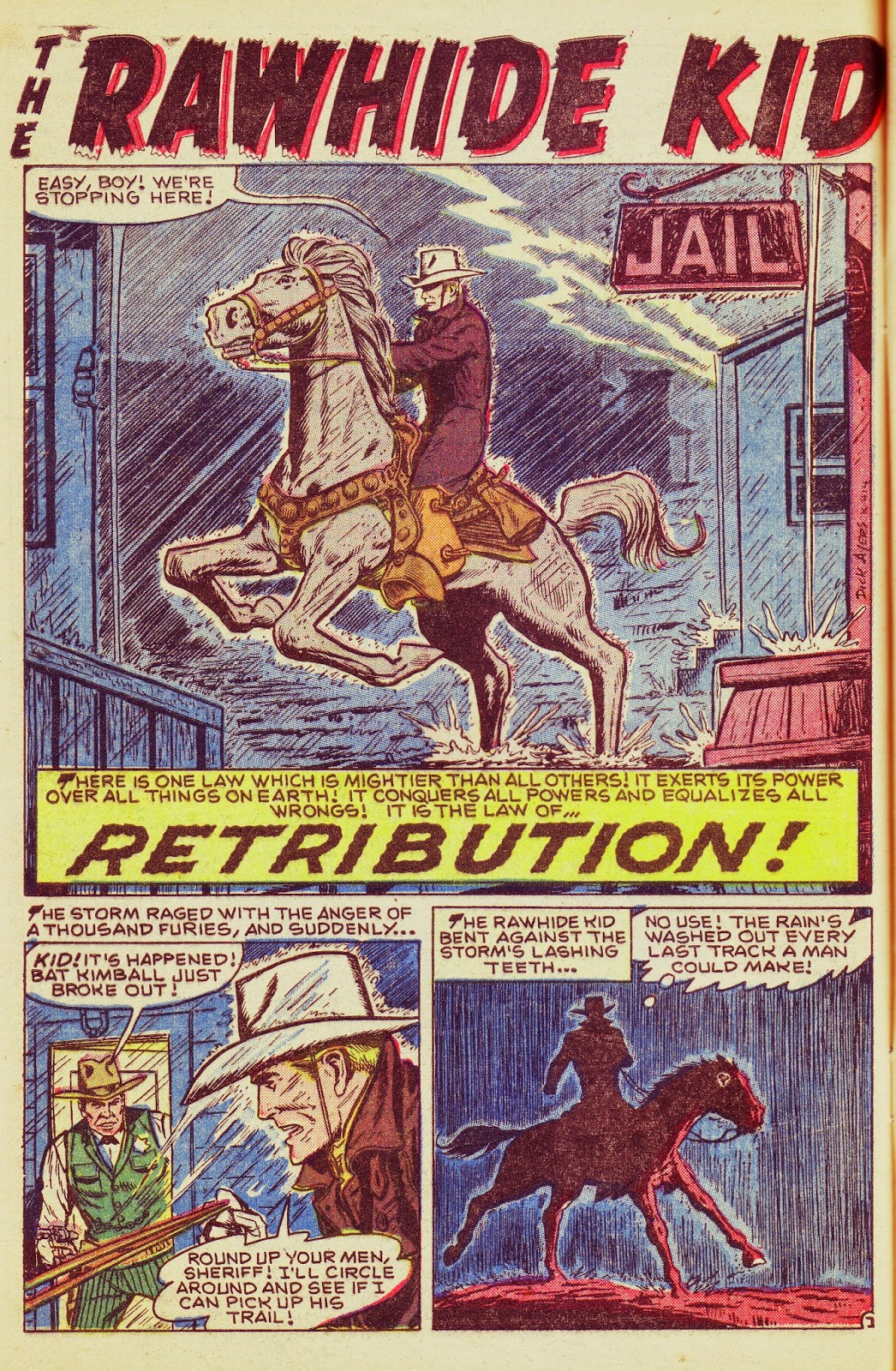 "Retribution", writer unknown, Dick Ayers art and lettering, Rawhide Kid # 11, Nov 1955. An atmospheric splash page from the original incarnation of the Rawhide Kid. Ayers' love of drawing westerns is evident in many of the stories he worked on throughout his career, including The Ghost Rider, Wyatt Earp, Two-Gun Kid, Rawhide Kid and countless genre stories. In the late 1970's-early 1980's he had a long run drawing Jonah Hex at DC. A more adult and gritty western than Ayers' earlier efforts, the combination of Michael Fleischer's scripts and detailed inkers such as Tony DeZuniga brought out some of his best storytelling in this period. Clearly, Ayers was at home in the genre. 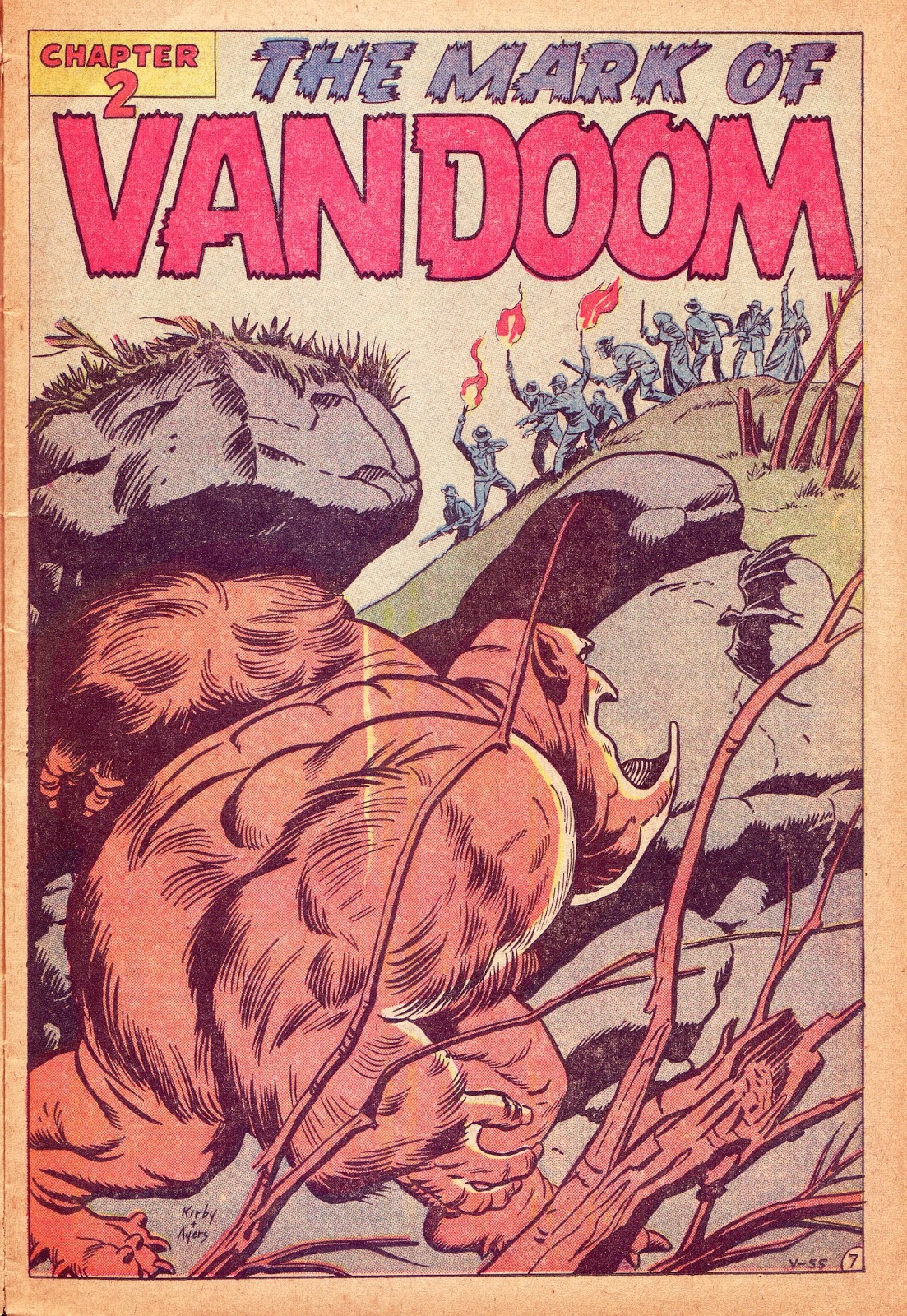 Another area of Ayers' expertise was as an inker, particularly over Jack Kirby's pencils. Stan Lee paired Ayers with Kirby, and his thickness of line especially suited the many monsters that overwhelmed the pre-hero Marvel era. Ayers was also an important component of Marvel's early superheroes, inking Fantastic Four, Avengers, Thor, Ant-Man, Human Torch, and my favorite: The Hulk. Coupled with Kirby's rough and tumble visual style, Ayers was instrumental in fashioning a distinctive look to the nascent Marvel line - one far removed from DC's clean-cut house style. Before Lee instituted a credit box that included the writer, artist, inker and letterer, Dick Ayers added the signature "Kirby and Ayers" to the stories he inked. 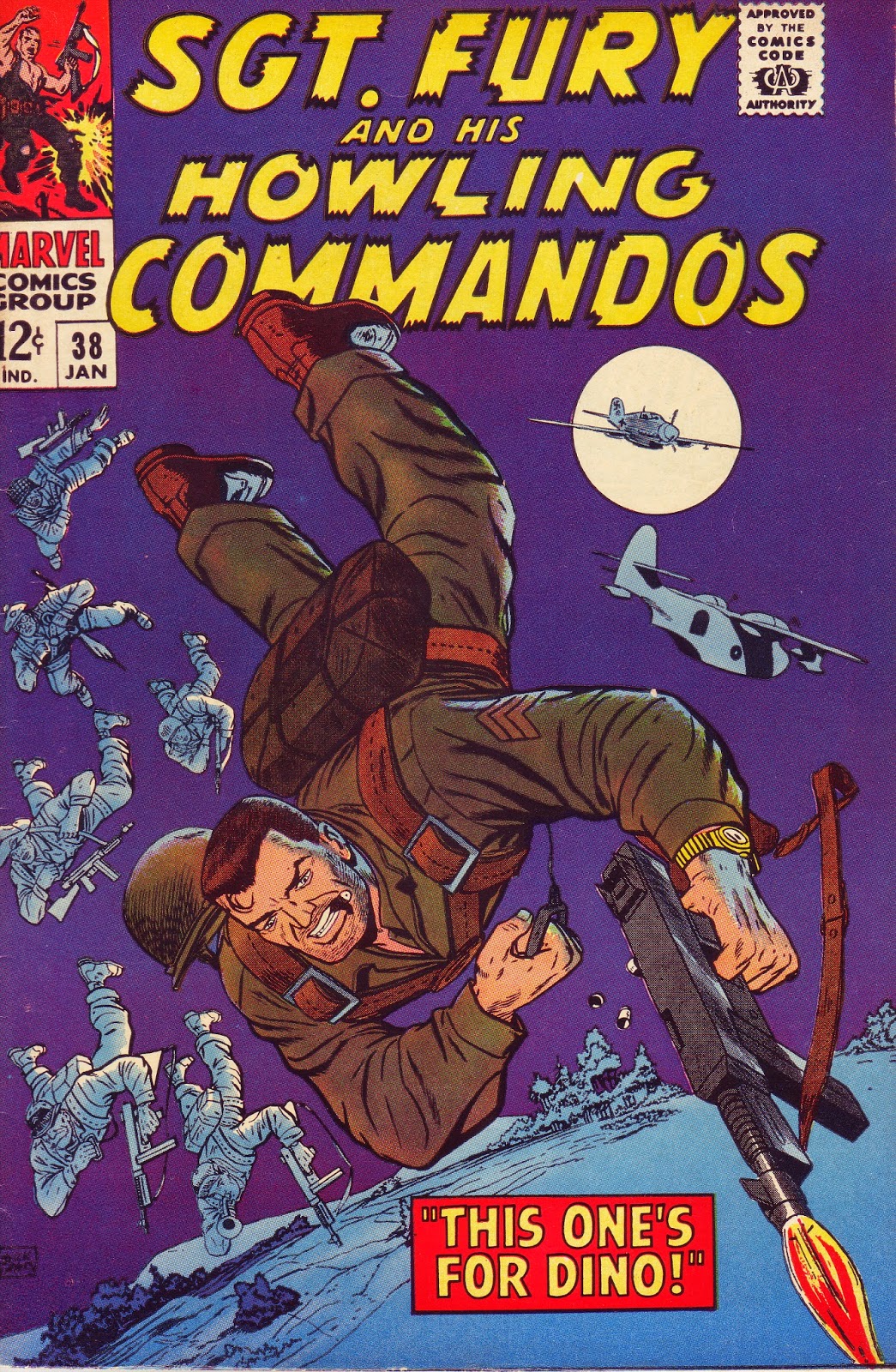 Dick Ayers cover to Sgt. Fury # 38, Jan 1967. The simplicity of design is complimented by the striking color scheme, probably by either Stan Goldberg or Marie Severin.

Ayers was also skilled at drawing war stories, producing a slew of material for Atlas' genre line. He was later given the assignment to take over Sgt. Fury from Jack Kirby. A World War II veteran, Ayers brought some of his own experiences to the strip and became closely associated with Fury and the Howlers, drawing most issues for over a decade. Under Ayers, and with stories/co-plots by Stan Lee, Roy Thomas and Gary Friedrich, Sgt. Fury was often an entertaining mag, even if the characters were more superhero than ordinary soldier. A top seller for many years, Sgt. Fury survivied in reprint form until 1981. 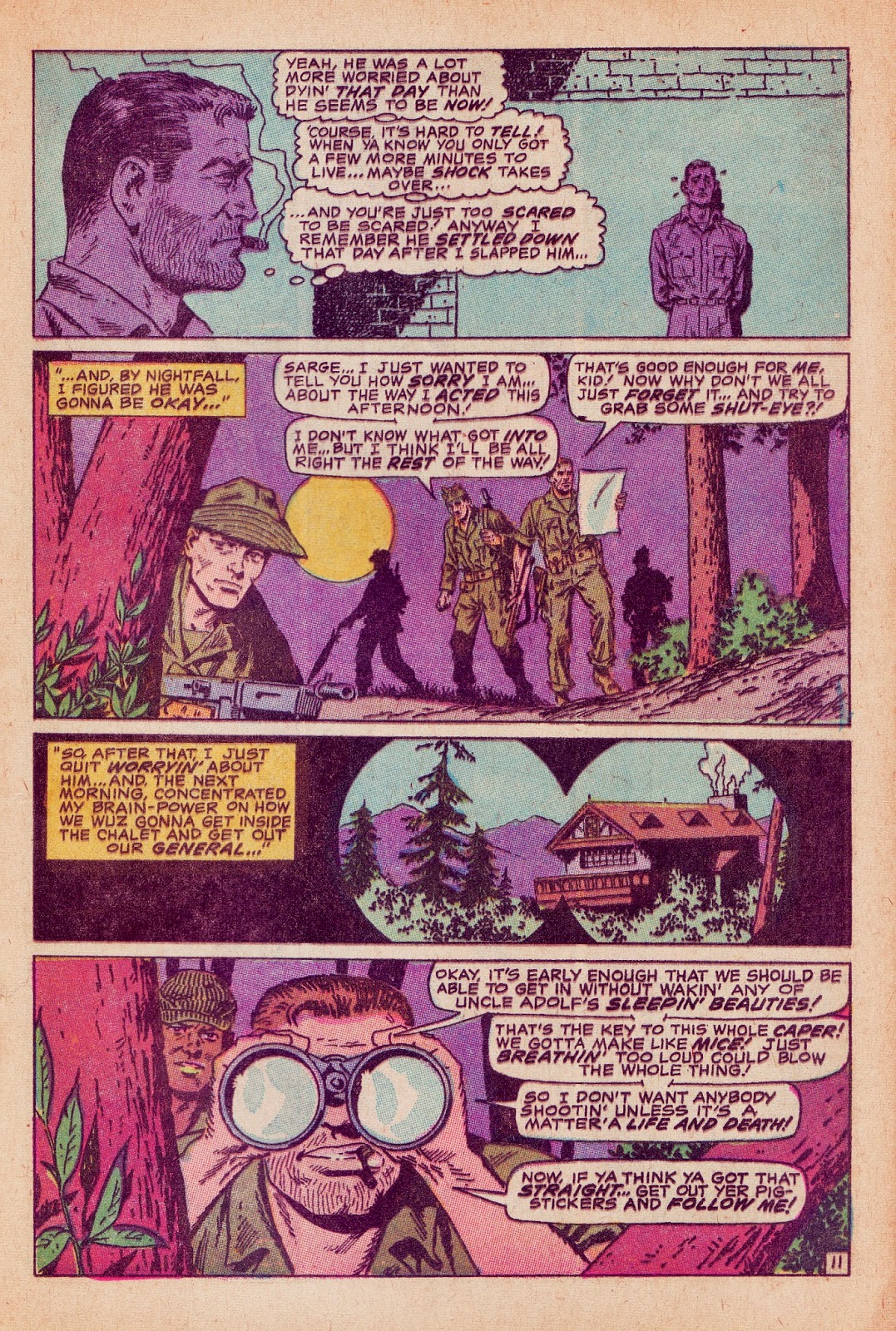 "The Deserter" Gary Friedrich script, Dick Ayers pencils, John Severin inks; Jean Izzo letters;, Sgt. Fury and his Howling Commandos # 75, Feb 1970. Ayers pencils were complimented by John Severin, who added a layer of depth and  authenticity to his pencils. Severin's stint inking Ayers was an artistic highlight of the series and Severin was lauded by Ayers as one of his favorite inkers 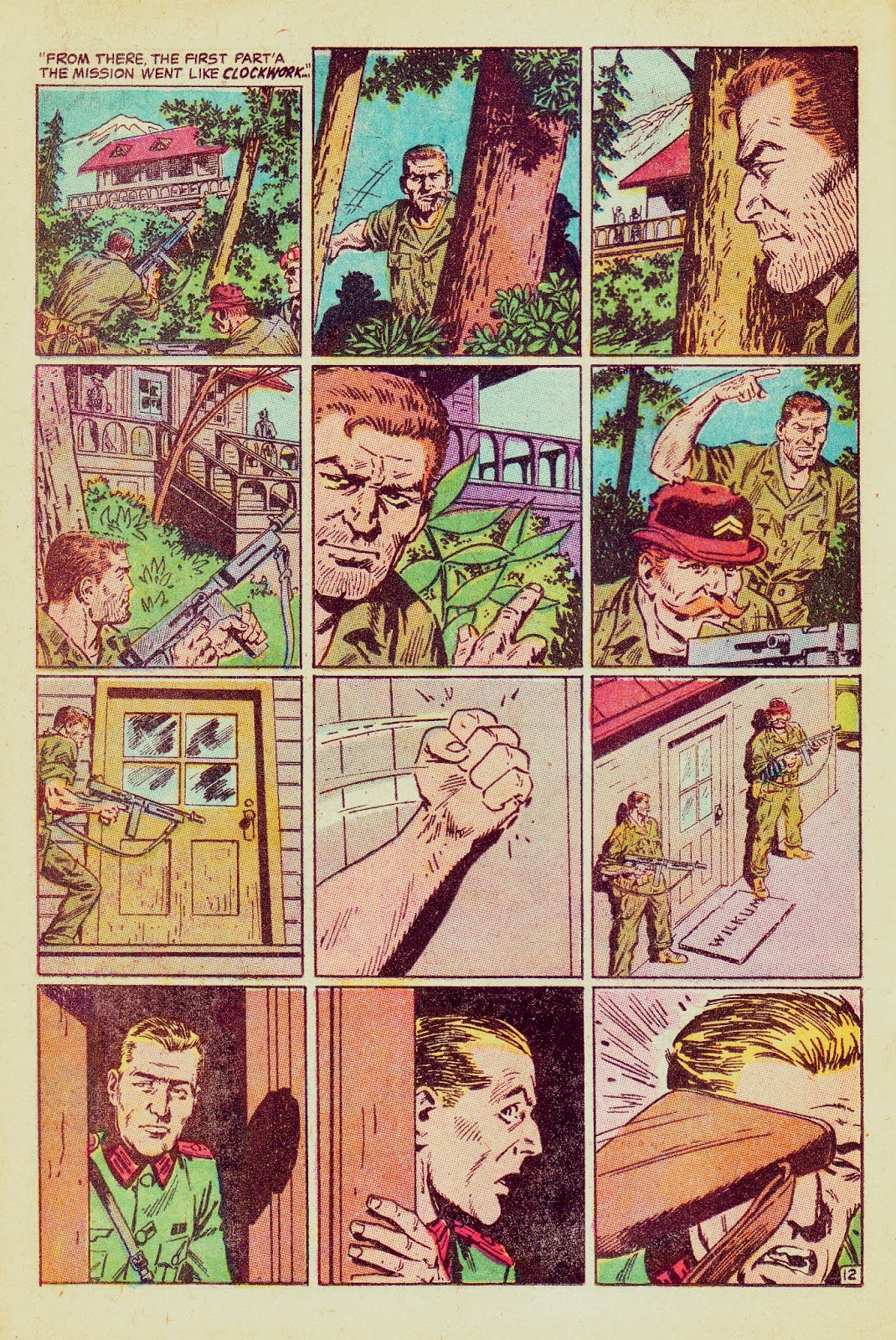 From the same issue, an example of Ayers' skill at telling a story without the use of dialogue. Inspired by Jim Steranko's silent sequence in Nick Fury, Agent of SHIELD # 1, author Friedrich often employed the same device in his plots for artists, although Ayers had done a story years before with Stan Lee in the same manner, "And Not a Word Was Spoken" which appeared in Two-Gun Kid # 61, Jan 1963. 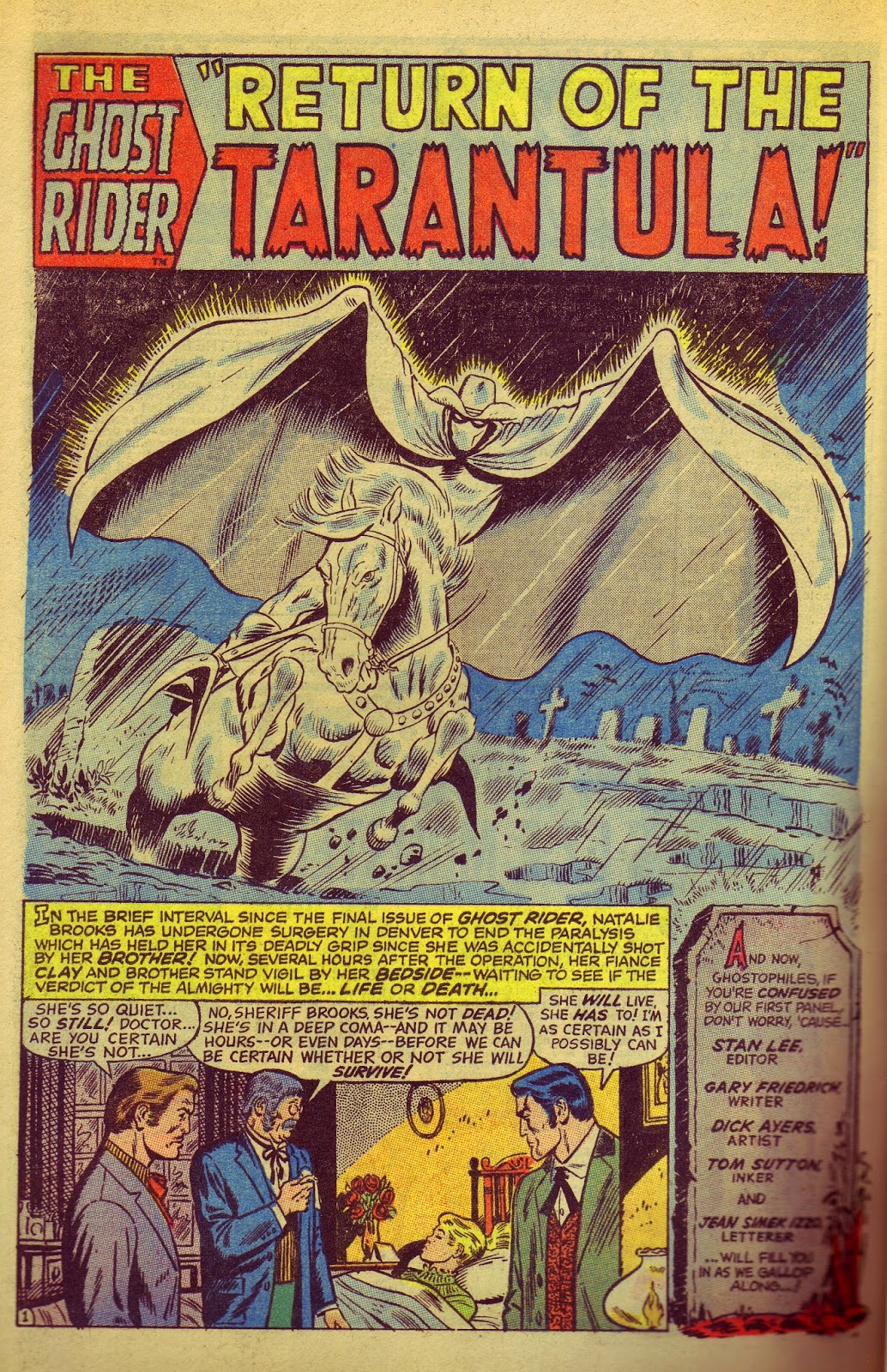 "Return of the Tarantula!" Gary Friedrich, story; Dick Ayers, art, Tom Sutton inks, Jean Izzo letters, Western Gunfighters # 1, August 1970. Ayers returned to The Ghost Rider when Marvel took the name of the defunct character. Running a scant seven issues, Ghost Rider returned as a feature in the 25 cent Western Gunfighters comic. Tom Sutton's atmospheric inking was perfectly suited to the strip; unfortunately the pair only collaborated on this one story. 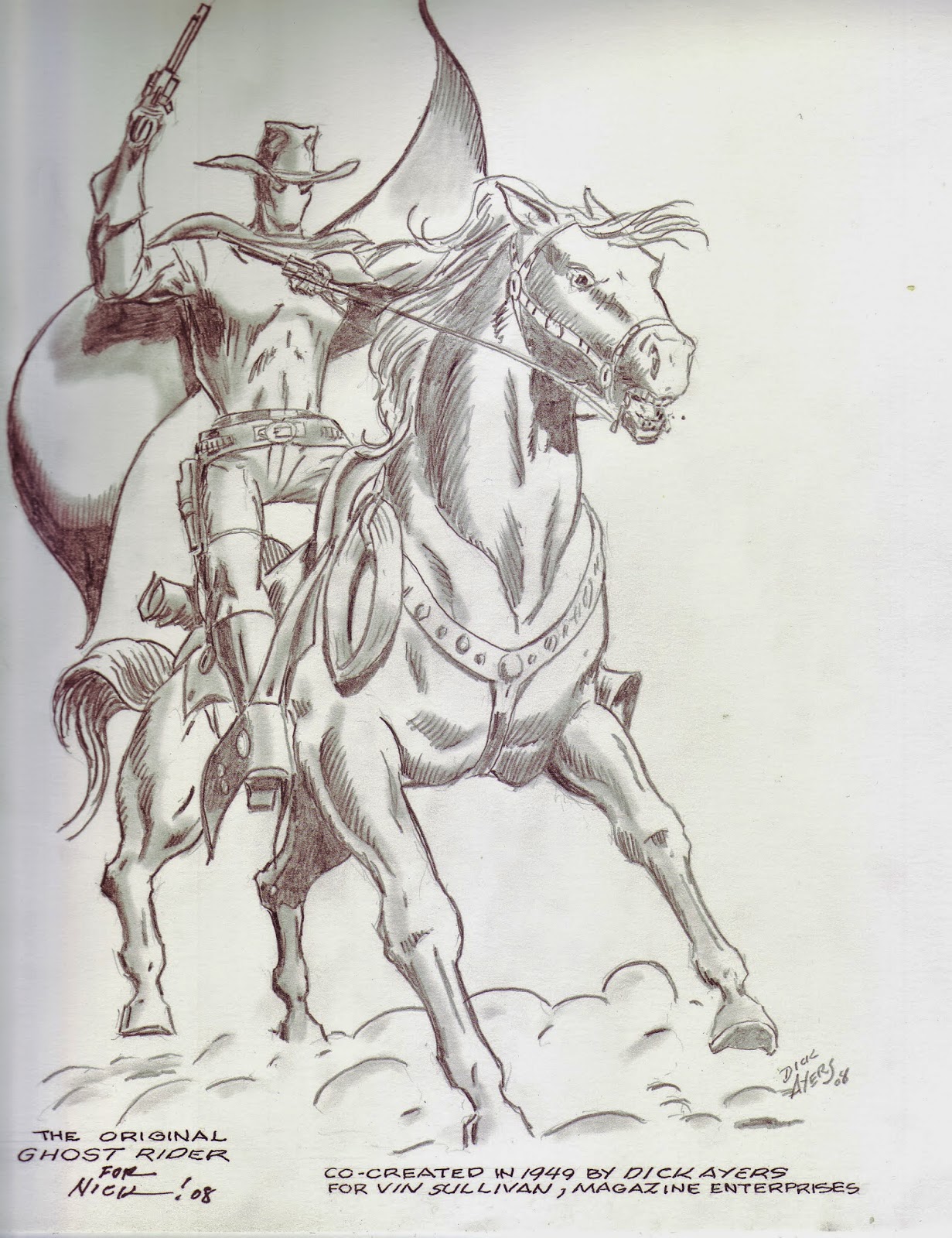 Ayers 2008 drawing of the Ghost Rider, inscribed to yours truly.

Throughout his career Dick Ayers had an individual artistic imprint. His characters were solid and he understood the importance of good storytelling. While his efforts on superhero stories was competent, and at times very good - in particular his rendition of the original Human Torch, the later Lee-Kirby version and Giant-Man - Ayers was clearly comfortable with more down to earth characters and settings. A professional who prided himself on always delivering the work on time, Ayers came from a era when the artist usually toiled away in obscurity; thankfully he lived to see his work appreciated, and was interviewed often, leaving behind a history of over four decades of achievements and experiences in comics. On a personal note, meeting the man behind the pencil and brush elevated his status even further as a fine human being. 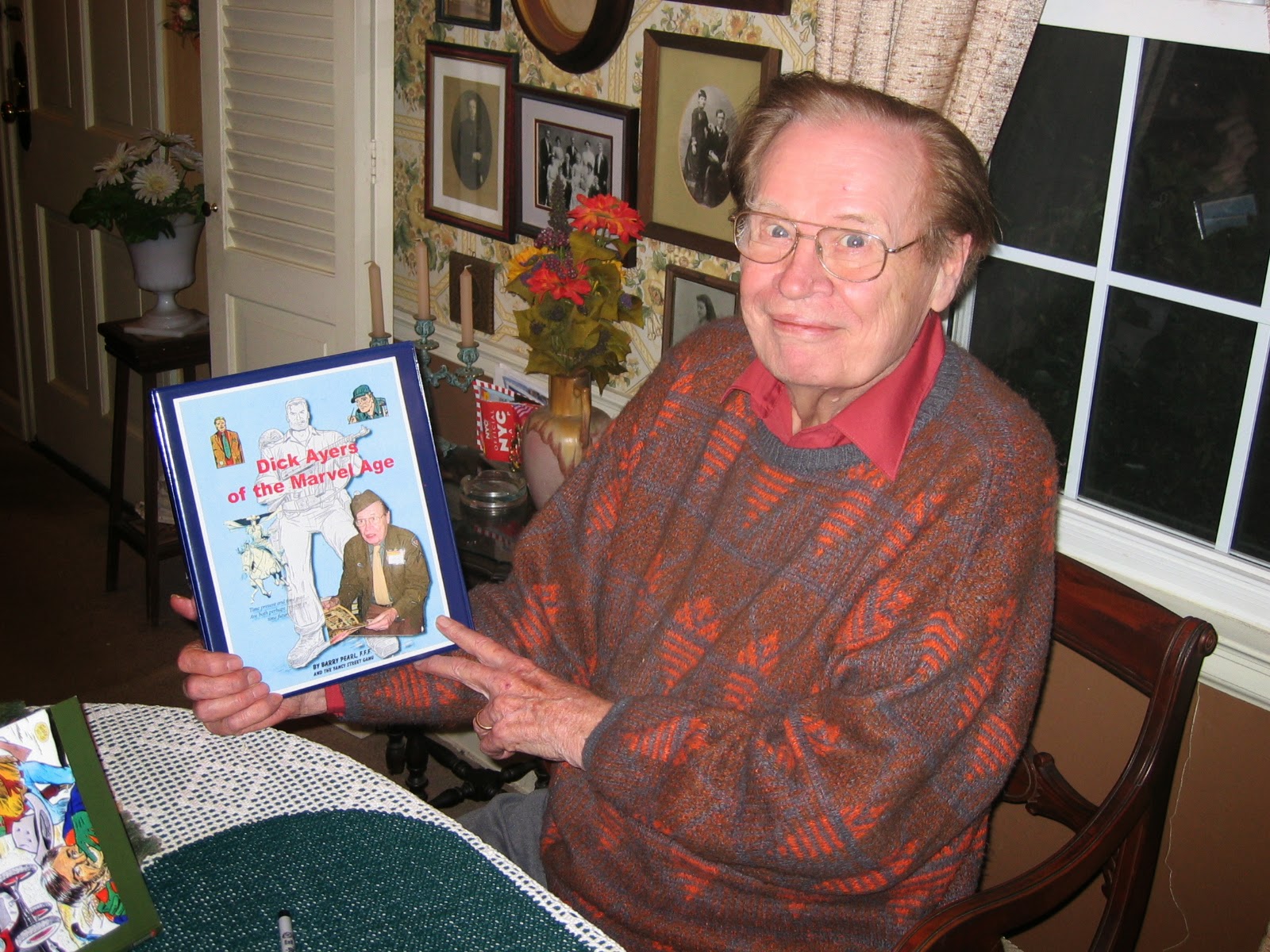 I'll close with a 2008 photo of Dick Ayers at his home, displaying a gift from Barry Pearl (with a little assistance from the rest of the Yancy Street Gang) an appreciation/overview/bibliography of Dick's work for Timely/Atlas/Marvel. We'll all miss you, Dick.


To read more about Dick in his own words, go to Barry Pearl's blog: