Steve Ditko's Shade, The Changing Man: A Look Back

The Steve Ditko Omnibus Volume 1 starring Shade, the Changing Man reprints, for the first time, the original eight-issue run of Ditko's 1977 creation, along with the unpublished 9th installment (in addition, all of Ditko's 1970s mystery, humor, sci-fi and war output for DC is collected). A little background is necessary: when DC had a downturn in sales, management demanded massive cuts throughout their line. Contents of the completed comics (minus coloring, which was the final level of production before heading to the printers) were compiled in order to retain copyright ownership. Totaling at a massive 942 pages, 40 xerox copies were printed in two volumes as Cancelled Comics Cavalcade and sent out to contributors. An additional copy was reserved for Bob Overstreet, publisher of The Comic Book Price Guide. A few have surfaced on the secondary marketplace and can be found online.

While the compilation and preservation of Ditko's work is laudatory, one aspect that troubled me, and which I believe is worth addressing, is the  decision to print Shade # 9 in black and white. When Ditko's unpublished Blue Beetle and Capt. Atom stories surfaced in fanzines, the addition of color in a small press publication was cost-prohibitive. In this instance the concern was of an editorial nature: to present the material without alterations (akin to a DVD release of an uncut film). However, I believe it has the exact opposite effect, since Shade was earmarked for color; the only reason it lacked hues was due to production being called to a halt. Color would invariably have enhanced the work and rendered it closer to what the artist had originally intended. 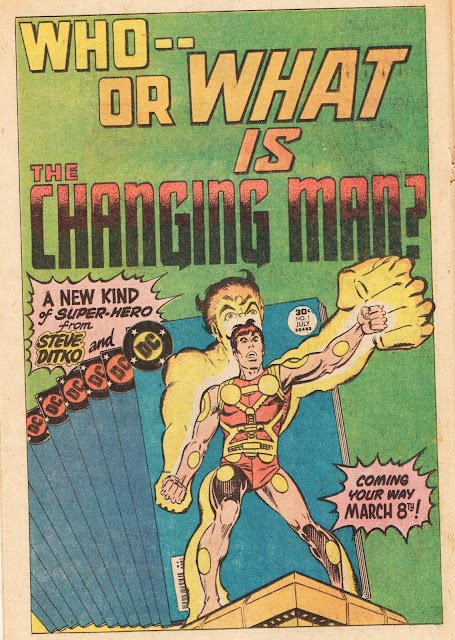 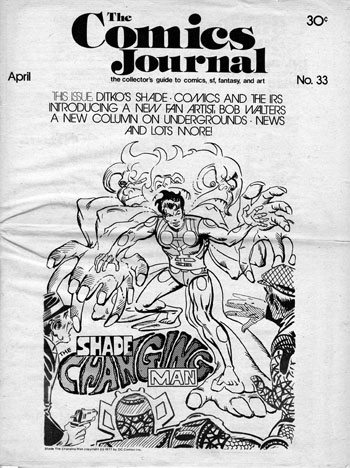 The Comics Journal # 33, April 1977 heralded Ditko's new character. Was this intended to be the original cover to issue # 1? A presentation piece? Promotion art for fanzines or conventions? It includes a hand-lettered title by the artist, emphasizing the word "Changing." Perhaps the logo was a preliminary design Ditko suggested to DC? This issue also includes a review by Mike Catron: "Shade: Ditko's new book shows potential."

Gaspar Saladino was one of the top letterers in comics, often sought-after by editors at both DC and Marvel to craft attractive cover copy and logos. Saladino created the "Shade" title, while Bill Morse devised "The Changing Man."

DC had planned to feature Ditko's name above the title, but since this was a collaborative effort and not a sole creation, the unerringly ethical artist  vetoed that idea. From The Comics Journal # 32, January 1977.

It's clear that these stories look infinitely better on higher grade paper. In 1977 the printing quality in most comics was abysmal. Straight lines wobbled and pages bled through consistently, making it difficult to appreciate the art, and sometimes hard to read. Here we see Ditko's illustrations reproduced with a much sharper texture, achieving a more rewarding experience. 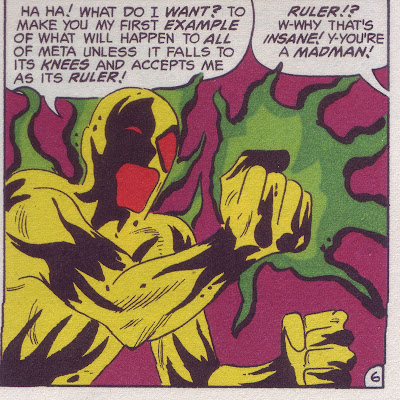 An example of DC's hardcover reprinting of Shade. Unless otherwise noted, images are taken from the original publications.

Ditko created the character of Shade, who fits into his concept of a hero and a moral ideal. As with many Ditko protagonists, Rac Shade is a man wanted for crimes he did not commit and pursued by both criminals and the law. He wears an outfit that gives him the ability to alter his appearance based on his opponent's fears. Like his later character, Static, the device could be used for good or evil, depending on the wearer. Although there is a base on earth, much of the story takes place in other-dimensional realms. 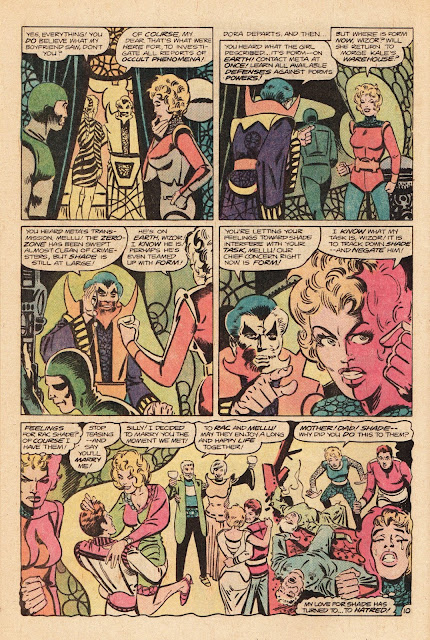 Ditko's plot is thick with characters and concepts - perhaps a little too dense in places - but he devises a number of interesting twists and turns throughout the series. Shade's love interest, Mellu, is a strong, independent woman. A Government agent, she blames Shade for the crippling of her parents, but harbors a modicum of doubt over his apparent guilt. While others may have played this plot-line out interminably, Ditko wisely resolves it in the 6th issue. 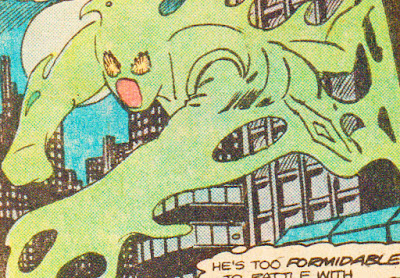 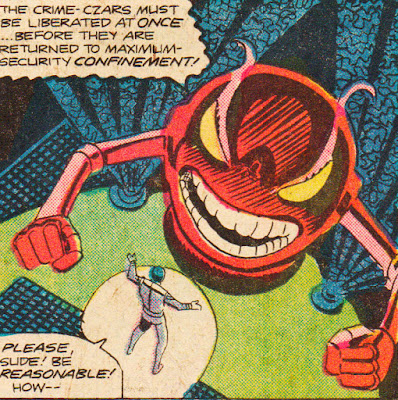 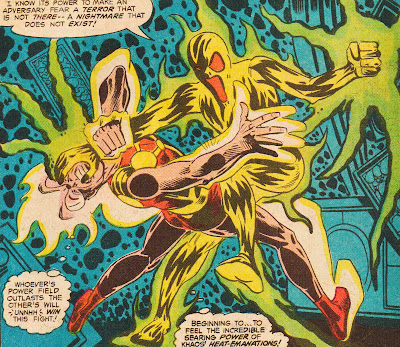 A trio of bizarre villains crafted by Ditko. From top to bottom, Form, Sude and Khaos.

Ditko's visual concepts stand out in his design of villains such as Form: a woman who can change into a misty substance, Sude: a large mechanical face with arms and enormous teeth, and Khaos: a distorted figure who represents anarchy. 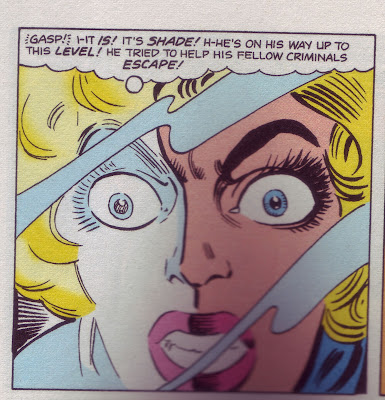 Ditko's use of lighting for dramatic effect is evocative of cinematographers such as Karl Struss and reminiscent of his friend and fellow artistic powerhouse, Wally Wood. Image from DC's hardcover edition.

While Shade has a lot to offer, there are a few drawbacks. I find Shade's visual signature of "changing" his appearance and frightening his foes lacking in drama. A big fist and a scary face can only go so far. One of the most inventive designers in comics, Ditko's costuming of Shade lacks his usual flair (his villains, as seen above, are much more dramatic visually). Michael Fleisher wrote the dialogue for every issue, which is at best workmanlike (the author stated in interviews that he didn't particularly care for the assignment). while I've enjoyed his solo writing on strips such as Jonah Hex, it's unfortunate DC didn't employ an author sympathetic to Ditko's philosophy; someone who could have invested as much into the dialogue as Ditko did his plotting and artwork. 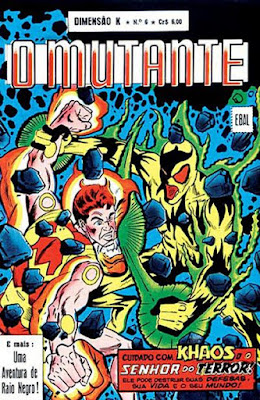 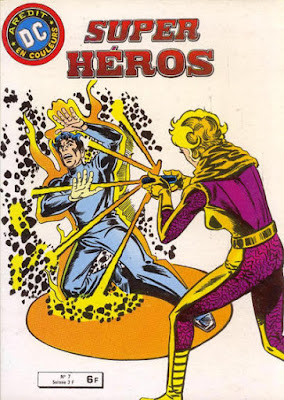 Shade was reprinted in other countries, including Brazil and France. O Mutante cover from Shade # 6, May 1978. Super Heroes image is reworked from the splash page of Shade # 3, November 1977.

This was essentially Ditko's last hurrah at DC in terms of investing effort in his own concepts. As the article by Joe Brancatelli below reveals, Ditko was growing disgusted with the policies of the major companies, who wanted their product to fit into a comfortable niche. This was anathema to Ditko, who thrived on seeking out new concepts to explore. After the cancellation of Shade most of Ditko's new creations would go the independent route, his work for DC and Marvel concentrating primarily on pre-existing characters. Speedball, created in 1988, was an exception, although a number of hands were involved in the character's development, which lead to a retreading of the teenage superhero motif.

It always seems that no matter how often the four-color comic book business goes into a creative nosedive, Steve Ditko is there with-a new concept, a new character or some new idea. Lately, Ditko has been plying his trade at DC, plotting and drawing a book called. Shade, The Changing Man.. Three issues into the book, Shade doesn't look to be another Spider Man. or another Dr. Strange, or even another Mr. A, but it is easily the most intriguing comic on the market. It's got everything a classic Ditko series has: a character, who is unalterably good, somehow finding himself in combat with organized society; an underlying battle between good and evil; philosophic musings about society, corruption and idealism; and a bunch of typically Ditkoish characters, plot twists, strange and exotic dimensions and artwork. And if the art itself isn't quite up to Ditko's usual exacting standards, it's -improving immensely with each issue.

Unfortunately, the coloring on the book is atrocious ("I always give them color guides," Ditko says, "and they never follow them.") and Ditko's work has never prospered on the smaller pages of today's comic books. "I've plotted up to issue 15 of the book," Ditko says, "but I don't know anything about the book except for the fact that (Mike) Fleischer is writing the sixth issue. I don't know anything at all about sales, either. DC doesn't tell you anything. For all I know it could be a big bomb." Always fiercely outspoken about industry matters, Ditko claims DC editors have been forcing Shade into the standard superhero niches at every opportunity. "I always try to do something different. I never wanted Shade to be just another costumed superhero. I'd have done it differently, but they (DC) want to stay with the hackneyed old stuff. "You look at the long-range prospects of the character and you know Shade isn't the kind of book you can do in 17 pages an issue. But after a while, I just blank out after I take the book in to the office." "You learn," he says bitterly, "that all they ever want is a half-assed reprint of the story you did for them last week. You learn that if you want to survive you have to put up a wall and stay away from all the comic people before they make you as dull and repetitive as they are."

Shade the Changing Man was not only a victim of economics but an example of the limited 17-page format that plagued creators (including Jack Kirby) in the 1970s. Less than a decade later high quality, longer, complete stories (called Graphic Novels) became part of the comics landscape. Unfortunately, the formats that would have been perfect for Ditko's work were reserved for fan favorites such as Frank Miller, John Byrne or Alan Moore. If you were not the current flavor-of-the-month Marvel or DC had no intention of spending money on what they believed to be a money-losing proposition. It took over 30 years for DC to publish a collection of Ditko's work for the company, including Shade. That is to be commended, but imagine if the artist was given the opportunity years ago to complete the Shade saga? What might that have looked like? 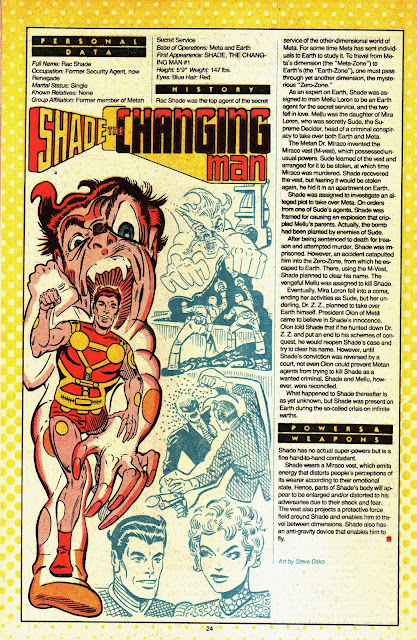 Ditko revisited Shade for the final time when he agreed to provide an illustration for Who's Who: The Definitive Directory of the DC Universe # 20, October 1986.

The Steve Ditko Omnibus starring Shade is available for purchase at Amazon: