The early issues of Marvel's popular 1960s era war series Sgt. Fury and His Howling Commandos included many feature pages that were likely the invention of Jack Kirby, who may have written some as well. "Weapons of War" debuted in Sgt. Fury # 1 and since the title is self-explanatory, let's let the pictures do the talking! 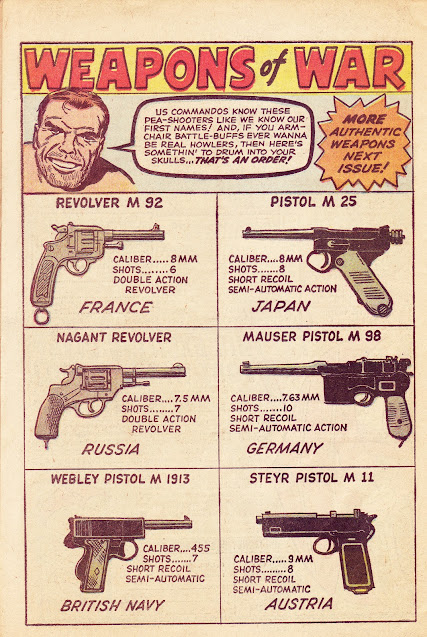 Sgt. Fury cheerfully introduces the "Weapons of Wa"r feature. Jack Kirby may have come up with the concept and possibly did the research; Editor-writer Stan Lee likely provided Fury's dialogue. For you completists, Dick Ayers inked, Artie Simek lettered and Stan Goldberg is the primary palette suspect. Sgt. Fury and His Howling Commandos # 1, May 1963. 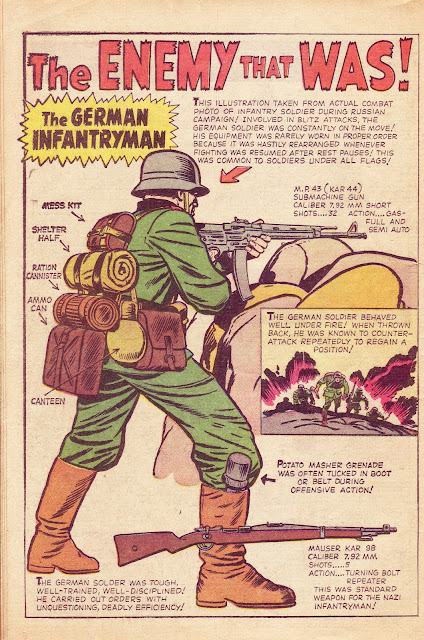 "The Enemy That Was!" is very likely written by Kirby, with some editing by Lee. The style is terse and reads very much like his later solo-scripted stories:

"The German soldier was tough, well-trained, well-disciplined! He carried out orders with unquestioning, deadly efficiency!" 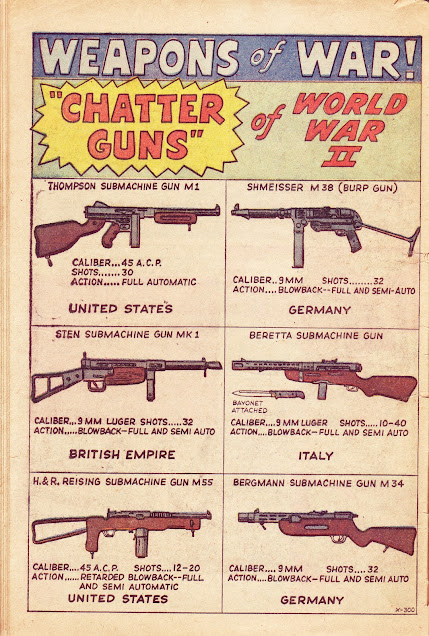 Sgt. Fury # 2 included two "Weapons of War" pages. I won't "chatter" about this page too much, but will note that Kirby likely produced this solo as well, with possible Dick Ayers inks. The use of "quotation marks" was a Kirby stylistic tic that he used throughout his career. 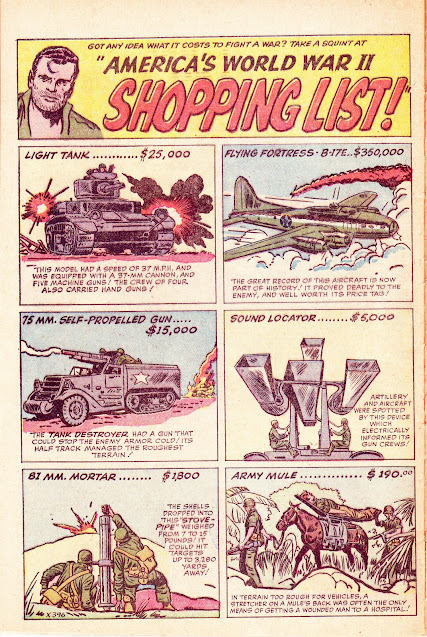 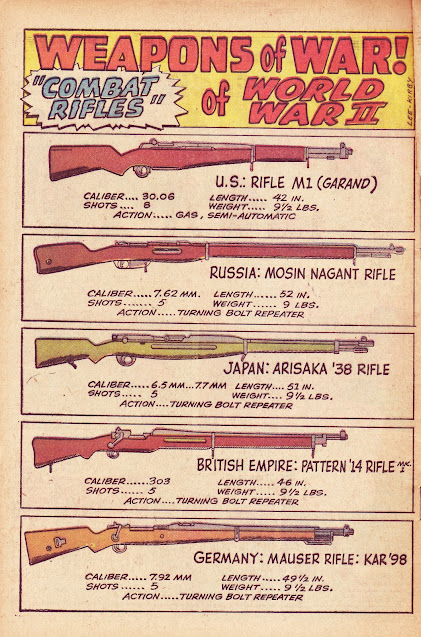 This "Weapons of War" page is signed Lee-Kirby, although there is little copy, so I doubt Lee had much input. Sol Brodsky inks ?; Sam Rosen letters; Stan Goldberg colors ? Sgt. Fury # 4, November 1963. 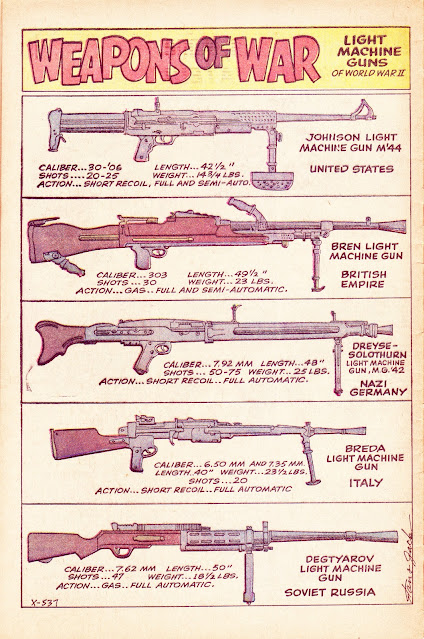 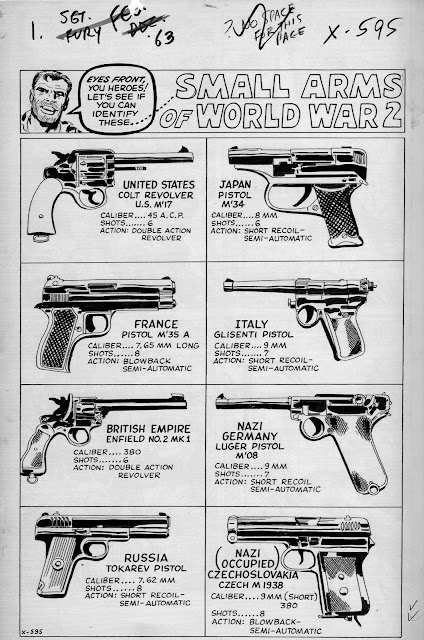 One final feature page was uncovered in recent years and finally published in The Complete Kirby War and Romance Omnibus in 2020 thanks to Editor Cory Sedelmier (and I'd add well worth purchasing).  The crossed out notation on the top right reads: "no room for this page" and was likely scribbled by Lee. It was originally scheduled to appear in Sgt. Fury # 6, but instead the decision was made to devote two full pages of house ads to promote Avengers # 4 and X-Men # 4. Kirby would depart from Sgt. Fury after issue # 7, returning in # 13 to depict a sensational team-up with Captain America. It would be another decade before he again worked in the genre and then at DC (see my post on The Losers here: https://nick-caputo.blogspot.com/2012/10/kirbys-losers-personal-journey-into-hell.html 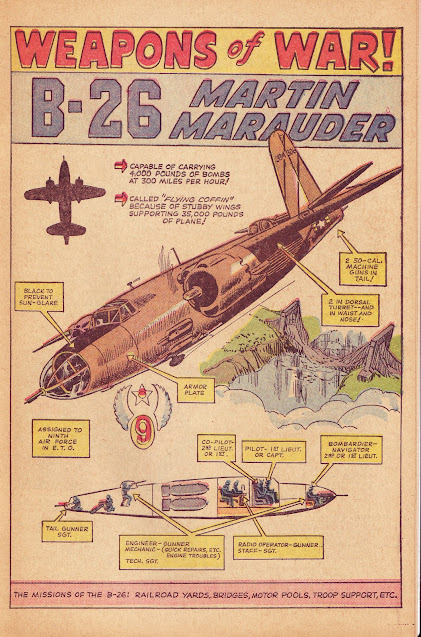 The "Weapons of War" page unceremoniously reappeared one year later in Sgt. Fury # 14, January 1965. Kirby was probably not involved, but neither was Dick Ayers, the artist who took over Sgt. Fury from Kirby for a long and successful run. The art appears to be the work of Don Heck. Its possible that Heck only inked the piece, but I don't detect another artist under the inks. Lee likely script, Artie Simek lettering.

Other special features would appear from time to time in Sgt. Fury, by the likes of Dick Ayers and John Severin, mainly in the Annuals (and I may showcase them one day) but when Kirby returned to a war feature, "The Losers" in Our Fighting Forces at DC, many issues included pages similar to those seen in the early issues of Sgt. Fury., leading me to believe Kirby was the primary architect of the concept. 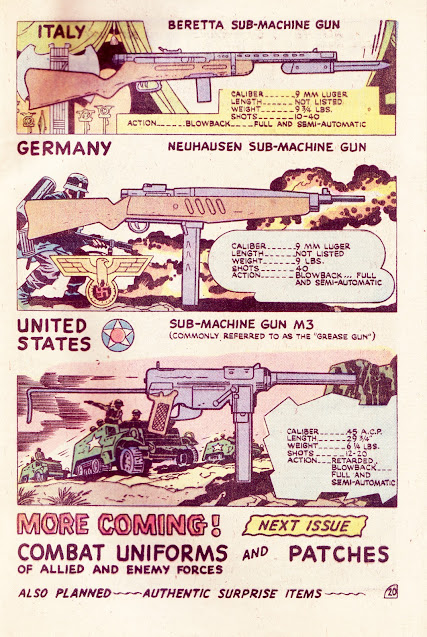 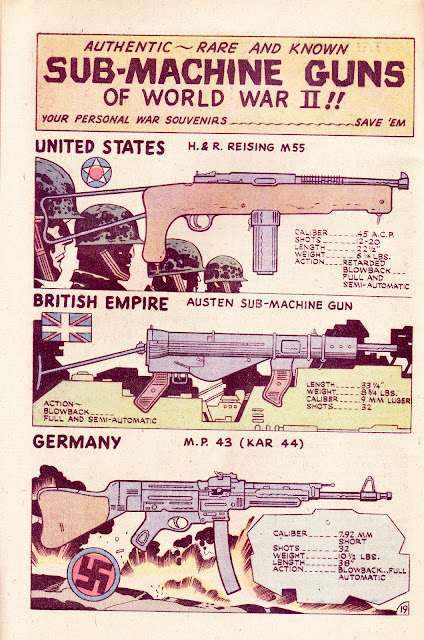 Kirby's feature pages began in his second issue of Our Fighting Forces, # 152. Jan 1975. Inks and Lettering by D. Bruce Berry. 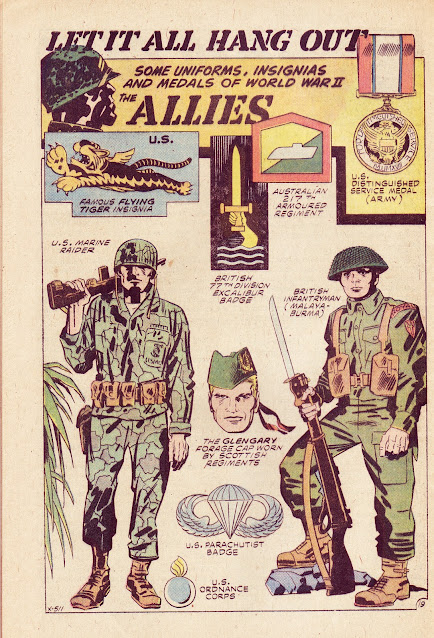 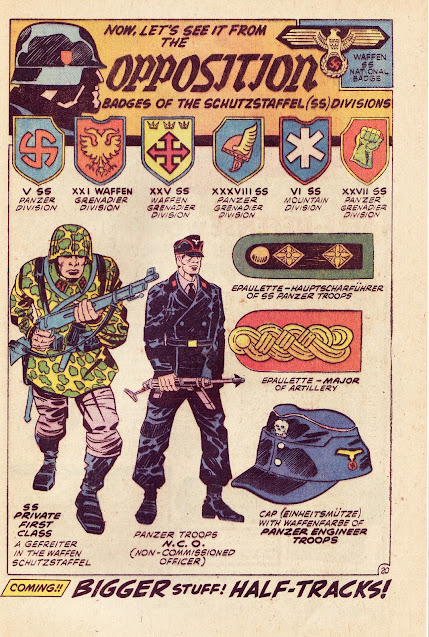 Kirby provides info on the allies and the opposition. Mike Royer inks and letters. Our Fighting Forces # 153, March 1975. 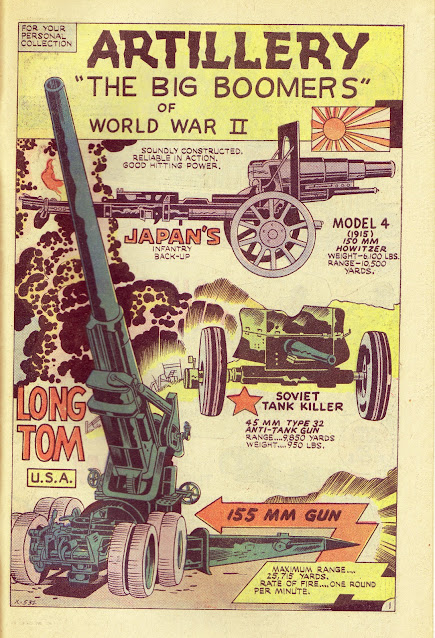 These special pages which appeared in both Sgt. Fury and Our Fighting Forces, gave the reader something extra for their money. They added background into the weapons, attire and hardware of WWII era combat which Kirby experienced first hand. I can't vouch for the authenticity of Kirby's research (if he indeed did the research on his own, although he probably had reference books in his library) but his gritty style and honest passion are evident. Kirby's sense of drama and superb storytelling was intensified by a feeling of desperation: nowhere did this come through more than in his war stories over the decades in Foxhole, Warfront, Battle, Sgt. Fury and The Losers.

This time out I’ll continue to showcase Bill Everett’s western stories for Marvel, beginning in 1960 (to read a thorough examination of  please go to Doc V's blog):

Bill Everett worked in every genre for Timely/Atlas, including war, humor, jungle, romance, horror/mystery and, of course, westerns. Everett contributed stories and covers to titles like Western Outlaws, Quick-Trigger Western and Wyatt Earp.

Everett's first 1960s' western was a five page filler in Kid Colt # 90, drawn, lettered and possibly written by him. ’s work at Marvel was sporadic in the early 1960s, as he was working at a greeting card company, but he returned in full force by 1966, working mainly on the superhero line, including stints on The Hulk, Dr. Strange and, of course, his baby, Sub-Mariner. had a special affinity for the western genre, though, and produced his share of back-up stories in this period, as we shall see. 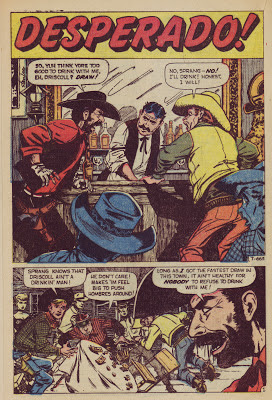 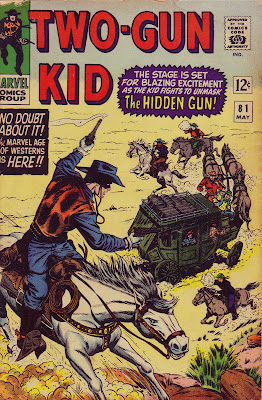 Everett's fist foray into Marvel's western stars begins with the Two-Gun Kid. Here  Everett teams with Dick Ayers, inking the cover and interior story (as Bill Roman, get it?). 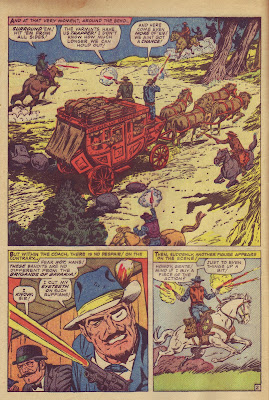 Dick Ayers was certainly no slouch in the western department, producing some of his most accomplished work in the 1950s and early 1960s. ’s rendering adds another layer to Ayers’ pencils, much like John Severin did with Ayers on Sgt. Fury. It would be another seven years before the team was reunited on another western. 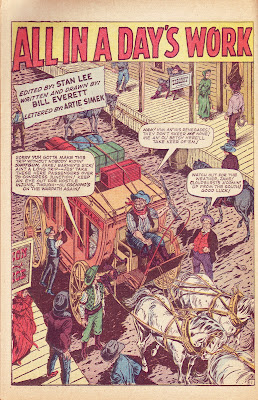 Everett returned for a back up story in the next issue of Two-Gun Kid, and his solo work is breathtakingly beautiful. One can feel the dusty, muddy streets of the town. Everett again uses his ability to turn the sea into a vibrant element as the stagecoach falls into the ocean. Everett put plenty of effort into these vignettes and the results are rewarding. 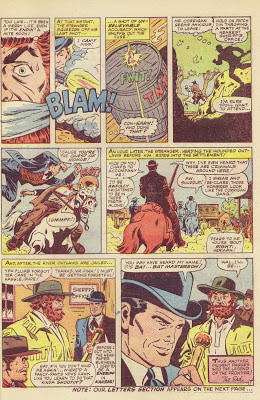 was an exceptional inker, and, like Wally Wood, added a gloss and depth to almost every penciller he worked over. Don Heck was another veteran western artist who was a standout in the genre, and the combination of the two produced fine results. The dialogue by Denny O’Neil in the final panel is a nod to the Bat Masterson TV show (and theme song) starring Gene Barry, which ran from 1958-1961 and lived on in re-runs for many years. The catchy theme song can be heard here: 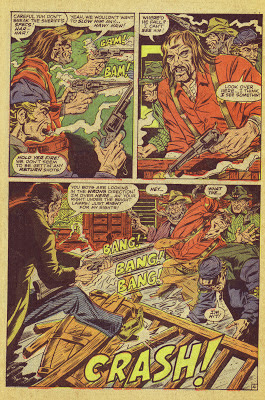 Newcomer Tom Sutton brought both cartoonishness and personality to the owlhoots pictured above, and his qualities meshed well with Everett. Sutton is another artist whose versatility and individuality is vastly underrated and deserves a post all his own. Although he was not often involved with superheroes or associated with one character, his diverse credits, including westerns, war, humor and horror, have proven him to be one of the most interesting artists of the period. 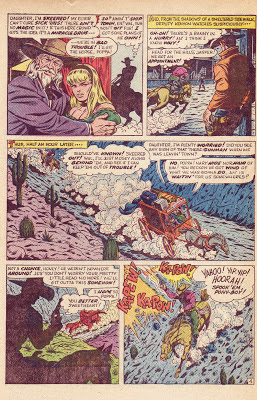 Page 4 of "Wild Bill Everett's" (as he was credited on the splash) written, drawn, lettered, perhaps even colored story - "The Medicine-Man or: The Parable of the Pitchman's Pitch". Two-Gun Kid # 91, Jan 1968.

Everett turned in some of his finsest western art in these back-up stories appearing in the 1966/1968 period. He sense of mood and pacing shines through, and adds a pretty gal, to boot! 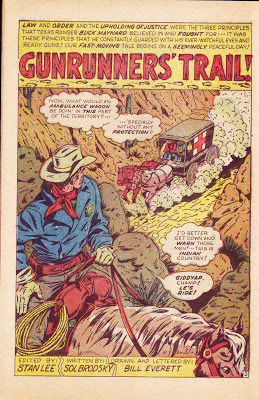 While Everett's art was not up to the standards of his previous stories, he still turned in an exciting splash page. 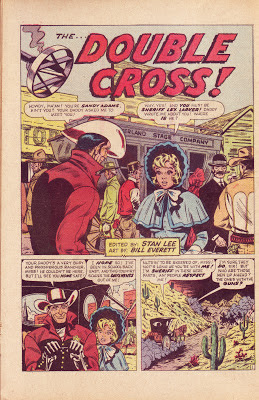 Everett's final solo western story was likely written by him as well.( "Great Shades of Hades!" sounds like a line that wouldn't come from any other Marvel writer!). Everett turns in another effectively drawn tale. It's a shame there were not more opportunities for Everett to work in the genre. It almost happened according to info from On The Drawing Board # 71, Dec 68:

"The new 25 cent western title is being held up until they have 3 or 4 completed
issues on hand....The book will probably feature 5- ten page strips. The strips
should include the Ghost Rider; Half-Breed, a new strip; a somewhat changed
version of Bill Everett's Negro-Indian "Dark Arrow" strip; and two others..."
Later information had Arnold Drake attached to the script, who noted that Dark Arrow, or Half-Breed, was supposed to be about a Native American character. There apparently was talk of adding new material to Mighty Marvel Western but it was not until Western Gunfighters appeared in 1970 that any new material appeared in the 25 cent line. The Dark Arrow/Half-Breed concept may have been turned over to Steve Parkhouse and Barry Smith, morphiing into the one-shot Outcast that appeared in Western Gunfighters # 4. It would have been interesting to see Everett work on a new continuing character, but it was not to be. 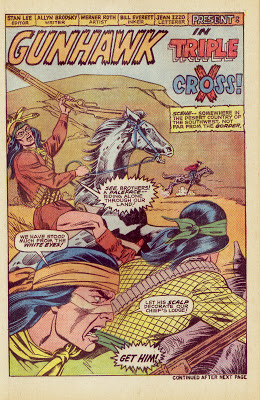 Bill Everett provides inks over Werner Roth in the Gunhawk feature. Gunhawk was a short lived western character that debuted in the anthology title Western Gunfighters and appeared from time to time in other strips. Like Don Heck, Werner Roth was very comfortable drawing  western stories, having produced quality work for Atlas on The Apache Kid and Matt Slade, along with numerous genre stories. At the time Roth was known for his superhero art on the X-Men, and compared to the overwhelming figures of Jack Kirby, John Buscema, John Romita and Gene Colan, Roth’s storytelling was often considered weaker and less dynamic. Roth was a solid storyteller and here his work shines combined with ’s precise inking. Roth also produced exciting work on a few Kid Colt and Rawhide Kid stories, especially those inked by Herb Trimpe. 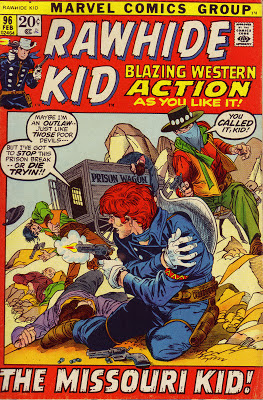 Rawhide Kid # 96 includes a double dose of magic. Inking Gil Kane’s dynamic cover, one wishes they had drawn some interior western stories together. Kane was another in a long line of artists who had a true feel for westerns, and whenever he was inked by , mainly on covers, the combination was exceptional. 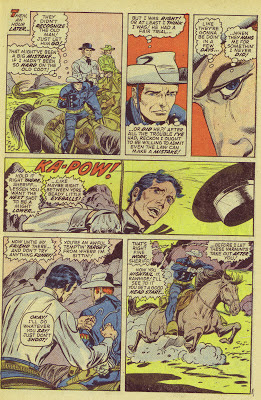 teamed up with Dick Ayers one more time, inking the Gary Freidrich written story “The Kid From Misouri”. 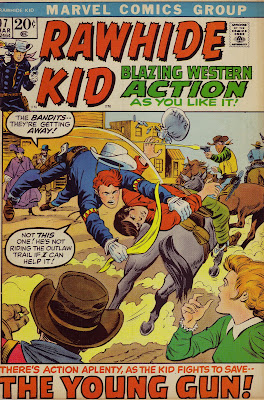 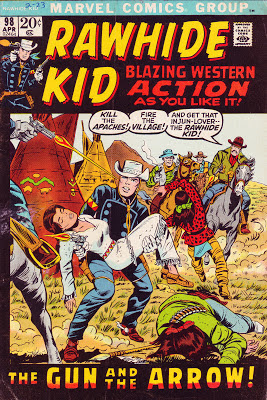 inked three consecutive Rawhide Kid covers, the latter two rendering Larry Lieber’s pencils, who had been drawing and often writing the character for years.  never inked Lieber on any interior stories, which is unfortunate, as would have added another dimension to Lieber’s pencils.

And so ends ’s western run at Marvel. Sadly, died in 1973, but his singular talent continues to live on, as fresh and exciting as ever, waiting to be explored, celebrated and appreciated.