In 1967 Marvel packaged a comic book for the ABC television network promoting their Saturday morning cartoon line. Not coincidentally, two of the debuting cartoons featured the Fantastic Four and Spider-Man. The indicia provided further information:

“Published by the American Broadcasting Company” and “prepared and edited by Magazine Management Company.”

It also included information that did not appear in other Marvel comics:

Independent News had been distributing Martin Goodman's products since 1957, although, as far as I know, it was never included in the indicia (at least inside the comic books. The IND symbol appeared on covers).

There was no reference to Marvel, either on the cover or interior pages, aside from the reprinted FF and Spidey stories.

In the past Martin Goodman packaged comics for outside companies (see my blog post on Big Boy). As with Big Boy, Production head Sol Brodsky was almost certainly overseeing the ABC comic; employing Marvel staff and freelancers on new material and likely assisting on the art in places. 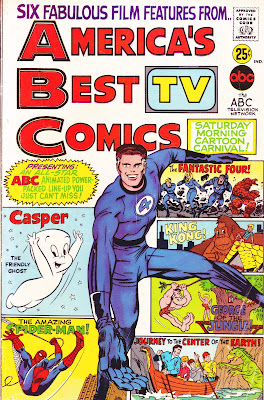 The cover is a compilation of vignettes featuring ABC's cartoon line-up, including stats of FF by (Kirby and Joe Sinnott and Spider-Man by John Romita. Casper, King Kong, George of the Jungle and Journey to the Center of the Earth art has been attributed to Mike Royer. The center image of Mr. Fantastic reaching out to the reader is penciled by Jack Kirby. The figure looks a little awkward, and the face may have been altered by another hand  (perhaps putting a smile on Reed's face). Inking is likely by George Roussos and Sam Rosen provides the distinctive lettering. 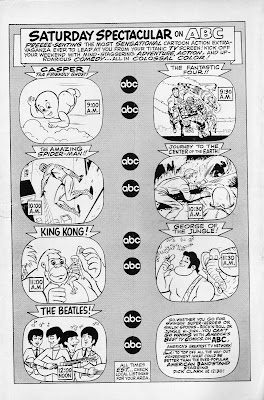 The inside front cover promotes all the upcoming ABC animated cartoons. The copy may be written by Roy Thomas, who, in email exchanges explained that he did not script any interior stories but may have written some of the ad copy. The art could be the work of John Verpoorten, who at that time was production assistant; with lettering by Sam Rosen (Note that the Spidey and FF cartoons rate two exclamation points instead of one!!!). As a child I eagerly awaited the FF and Spidey cartoons in the fall of 1967 and watched all the ABC cartoons, including the Beatles, who, either due to contractual agreements, or possibly because their series was two years old, having premiered in 1965, did not rate a feature. 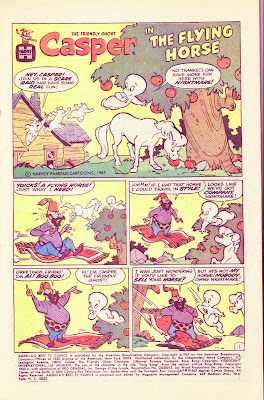 Casper, the Friendly Ghost had a long history in animation and comics. Originally created for a children's book by Seymour Reit and Joe Oriolo, he instead found life (pun intended) in Paramount/Famous Studios cartoons beginning in 1945. While the theatrical cartoons ran until 1959, Casper became a staple of early television, with new cartoons soon created for television. Casper first starred in his own comic book at St. John in 1949, moving to Harvey comics in 1952. In 1959 Harvey purchased the rights to the character. 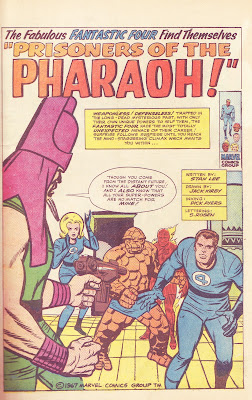 A truncated version of Fantastic Four # 19 (October 1963) by Stan Lee, Jack Kirby and Dick Ayers (with the spelling of Pharaoh corrected from the original; the question is can I spell it correctly!) is included. The story was loosely adapted for the 1967 Hanna-Barbera cartoon (with Alicia cut out of the storyline). Added to the splash is the Marvel corner symbol and a copyright and trademark notice. 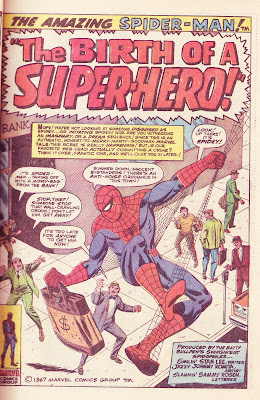 "The Birth of a Super-Hero!" by Stan Lee and John Romita was originally published in Amazing Spider-Man # 42, approximately a year earlier and heavily edited to fit the 10 page slot. Unlike the FF tale, this was not adapted for the Grantray-Lawrence cartoon. The Mavel corner symbol and trademarks again appear on the splash page. 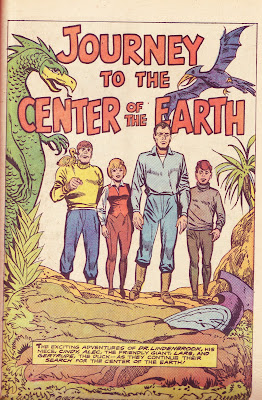 The cartoon version of the famous Jules Verne story (which had been adapted into a movie in 1959) took many liberties with the original. Produced by Filmation, an animation firm in competition with Hanna-Barbera, and best known for adaptations of Superman, Batman, Aquaman, Archie, and Star Trek. Like H-B, their limited animation technique was often lacking, although they a few shows, including Star Trek, had a degree of quality. As with many of these cartoons, the openings were better animated than the programs (and had great theme songs), as can be seen here:

The series lasted one season, although it continued in re-runs. The voice of Prof. Oliver Lindenbrook and Count Sacknussem was supplied by Ted Knight, who worked as a  voiceover artist for Filmation in the 1960s. Knight would go on to greater acclaim a few years later as inept broadcaster Ted Baxter on The Mary Tyler Moore show. 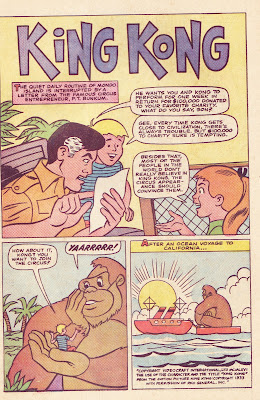 King Kong was a Rankin-Bass production, in association with Japan based Toei, who provided the animation. The cartoon was (very) loosely based on the original movie, and Jack Davis was involved in character designs. You can read much more about the genesis of the cartoon here:

I suspect the pencils on King Kong are by Sol Brodsky with inking by Frank Giacoia. 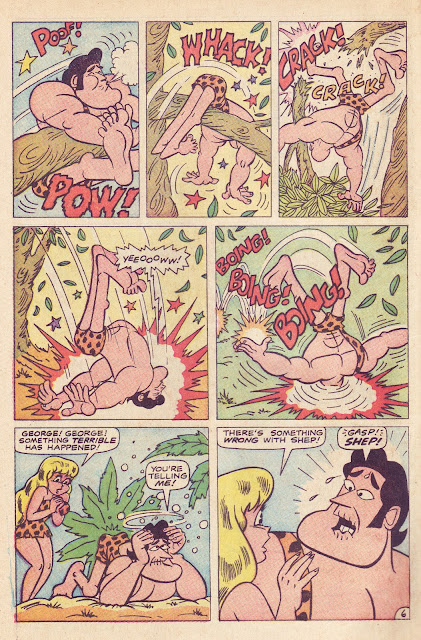 Watch out for that TREE!!  I’m not certain who drew George of the Jungle; John Tartaglione or Sol Brodsky are possible candidates, although Ursula’s face makes me suspect that Bill Everett may have penciled and/or inked the strip. Jean Izzo lettering. Writer unknown.

George of the Jungle was the last new cartoon series produced by Jay Ward and Bill Scott. Both men are noted for the satirical Bullwinkle show, which included segments on Dudley Do-Right, Fractured Fairy Tales and Peabody and Sherman. The cartoon lasted one season and contained episodes of Tom Slick and Super chicken. the catchy opening theme can be seen here: 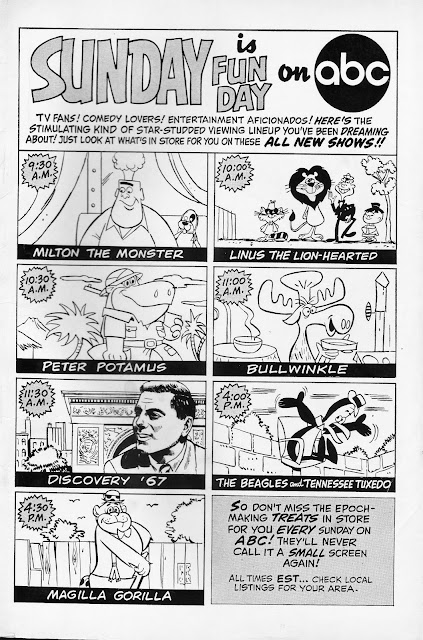 The inside back cover was utilized to promote ABC's Sunday morning line-up, which included Bullwinkle, Peter Potamus and Tennessee Tuxedo, the latter which featured the voice talents of Don Adams of Get Smart fame. While the copy claims the cartoons were all-new, many - if not all - were shows that had been in syndication. Discovery '67 was an educational show for teens that ran from 1962-1969, changing it's name each year (researching these shows has been quite educational!). 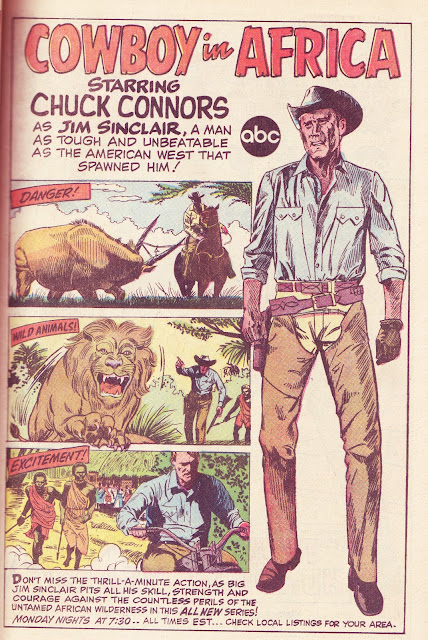 Cowboy in Africa. John Tartaglione art; Frank Giacoia inks or corrections (the lion in the center frame may be the work of Giacoia); Sam Rosen letters; Roy Thomas copy?

Cowboy in starred Brooklyn born Chuck Conners, of Branded and Rifleman fame. This series was produced by Ivan Tors, known for his hit series about a dolphin, Flipper, but it only lasted one season. You can see the opening here: 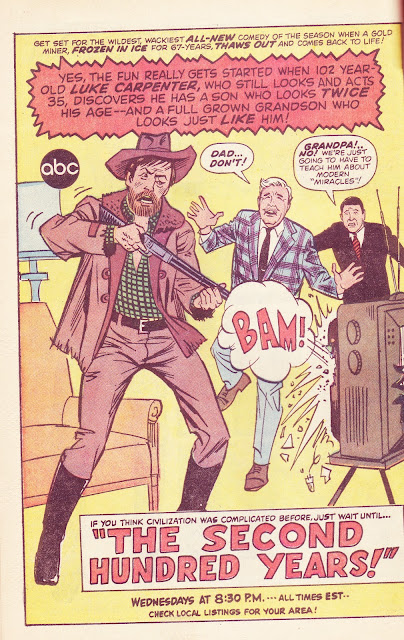 The Second Hundred Years was another short-lived TV series. The premise revolves around a gold miner frozen in ice for 67 years (maybe the producers were reading Marvel comics for inspiration) and revived in present day 1967. Hilarity ensues (or not). The series starred  Monte Markham, an actor who had an abundant career, particularly on television beginning in the 1960s, appearing everywhere from Mission Impossible to the Golden Girls. Arthur O'Connell was another familiar face in movies and TV. One of his earliest roles was in the closing moments of Citizen Kane, but he also had a strong supporting role in Anatomy of A Murder (1959) starring Jimmy Stewart. I even found the opening episode of this obscure show on You Tube! Watch it - if you dare! 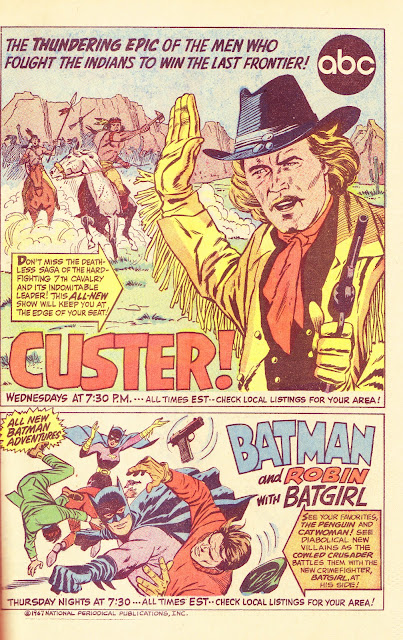 Boy, did ABC have it's share of flops in 1967! Custer was another one season wonder. The series co-starred Slim Pickens but was cancelled after a scant 17 episodes, facing heavy competition from the Virginian and Lost in Space.

And part of this series can also be viewed on You Tube:

While it’s odd to see Batman promoted in a "Marvel" comic, one must remember that this was packaged for ABC, and the caped crusader was enjoying his third season on television, although after becoming a phenomenal hit with both children and adults the ratings were sliding precipitously. 1967-68 would be its last season. Art is by veteran George Tuska who likely never drew Batman before, but would do so again in the 1980's for DC.  Robin is left out of the picture, likely due to ABC's desire to promote Batgirl, who debuted in the third season, played by Yvonne Craig. (Thanks to Britt Reid for correcting the info!) 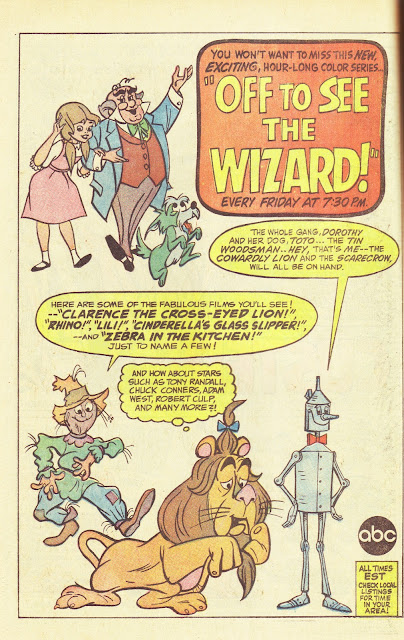 Off To See The Wizard was a showcase for recent MGM family movies such as Clarence the Cross Eyed Lion and Flipper, highlighted by wraparound animation segments and music from the Wizard of Oz. Chuck Jones was executive producer, Abe Levitow, producer and director, and voices were provided by Daws Butler, June Foray and Mel Blanc. You can view an animated segment here: 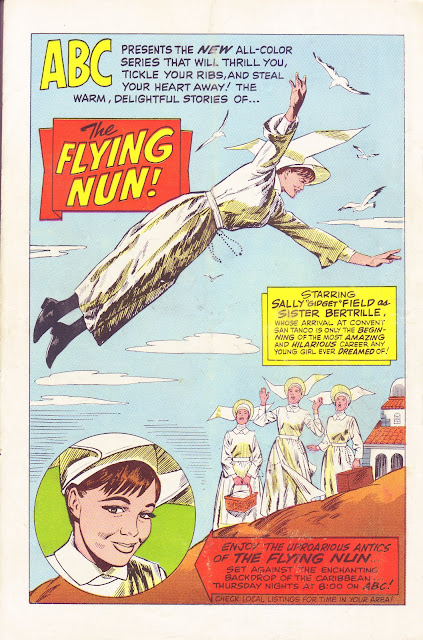 We end with a particularly odd concept, even for 1960s TV that included monster families, witches and talking horses. The Flying Nun was based on the 1965 book The Fifteenth Pelican, by Tere Rios. It starred Sally Field as Sister Bertirille, a nun who discovered she had the ability to ride air currents. Every week she became involved in outlandish situations. The show was a modest hit for ABC, running three seasons. Sally Field went on to greater heights (I couldn't resist!) on television and critically acclaimed movies such as Norma Rae (1979), Places in the Heart (1984) and Mrs. Doubtfire (1990). To continue the comic book connection, Sally Field played Peter Parker's Aunt May in two movies beginning in 2012. 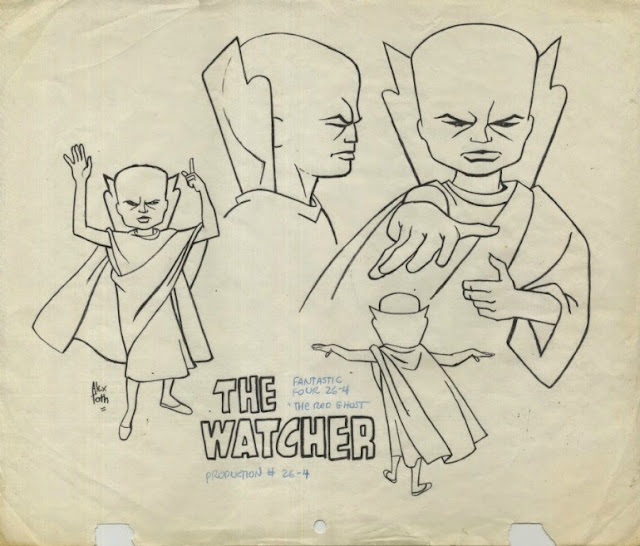 Master artist Alex Toth's adaptation of The Watcher, a supporting character in the Fantastic Four created by Lee and Kirby. The Watcher appeared in a few FF cartoons, notably adaptations of "It Started on Yancy Street and the "Galactus Trilogy" from issues 48-50. 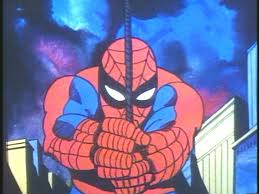 Spider-Man followed (with the words IN COLOR flashing on my black and white TV. I didn't quite understand why there was no color on MY set!). It was a thrill to see my favorite hero brought to life, although I couldn't quite understand who The Green Goblin  was so different from the comic book version, and why they didn't adapt the unmasking story! Grantray-Lawrence obviously didn't understand their target audience!
While many of the cartoons don't hold up under viewing as an adult, they were appealing to me as a child and a few remain sentimental favorites.It's surprising that many of these obscure shows have survived, especially the short lived prime time programs, and can be viewed (at least in part) on You Tube. 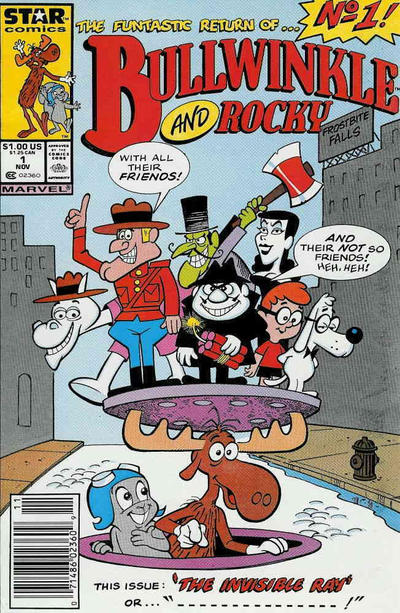 America's Best TV Comics was packaged in hopes of getting children who read comics interested in ABC's product. The results may have lacking, since no other collaborations between ABC and Marvel appeared. Adaptations of cartoons or television shows  were left largely to companies like Dell/Western-Gold Key, who specialized in such fare. This would change in the 1970's and beyond, as Marvel became involved in a slew of movie and television adaptations including The Wizard of Oz, 2001: A Space Odyssey, Star Wars, Planet of the Apes, Man From Atlantis, Battlestar Galactica, GI Joe and Bullwinkle. While each title achieved varying degrees of success, this push for outside product was a sign that Marvel was expanding, and an emphasis on creating new characters and ideas was not as prominent as it had once been.    .