While most fans are aware that John Romita, Marie Severin, Herb Trimpe and others provided art corrections and alterations for Stan Lee, it is not common knowledge that Jack Kirby also contributed his share of corrections over other artists work in the early days of Marvel.

In the late, lamented Jack Kirby Quarterly # 12 (Spring 1999), I was intrigued by a column written by Nigel Kitching discussing Kirby's art corrections. Like myself, Nigel thrived on minute aspects of comics art, and his first discovery was one that had completely escaped my notice.

This splash was the first image Nigel discussed, drawn by Steve Ditko. Notice anything unusual?

To quote Nigel:
"Spider-Man's head is clearly Ditko - the webbing is organized in typical Ditko fashion. But the body is nearly all Kirby. The webbing on Spider-Man's right hand has been hastily drawn as only a series of lines; Ditko never used this shorthand style. The feet are all wrong: Ditko drew a distinct arched instep."
While I'm not completely certain that Kirby drew those hands, they may well be a quick attempt to copy Ditko as best he could.
Nigel continues:
"If you look carefully, you can see the point where the correction artist took over from the original drawing. On the lower part of the torso, the webbing lines are much heavier. The horizontal webbing lines on the shoulder disappear on the arm where the correction artist had forgotton to draw them in..."
Nigel goes on to explain how Kirby eliminated the groin area, how Spidey's thigh goes up practically to his waist and how differently Kirby draws the boots. Never had I seen anyone so meticulously dissect such work and I was greatly impressed. The remainder of Nigel's article point out corrections that Kirby made to early issues of Don Heck's Avengers. This led me to email Nigel, prasing him for his observations and explaining that I too liked to study art styles and had indeed noticed some of the corrections he discussed. I'll post most of them here, While Nigel and I didn't agree on every drawing, we were on the same page 99 % of the time.

Avengers # 9, page 10, panel 5
Nigel noted that the Executioner was by Kirby. The foreshortened arm and square fingers point to Kirby's involvement. 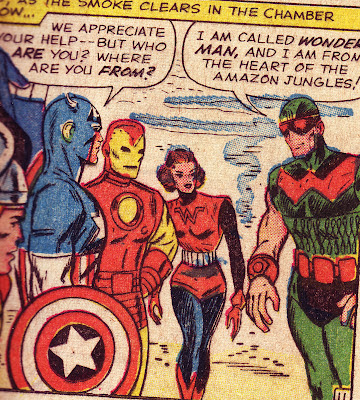 Nigel is certain that Cap is drawn by Kirby. I concur. Heck had a specific way of drawing Cap's face. This is also a typical Kirby pose. 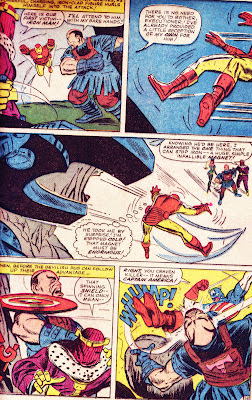 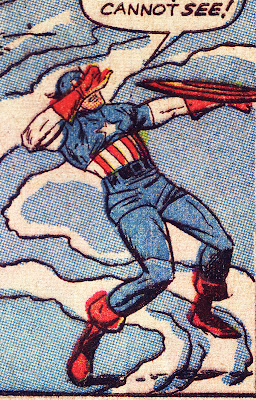 Avengers # 9, page 21
Nigel noted Panel 3 as Kirby drawn. The figures of Thor, Cap and Giant-Man's hands all have the Kirby look, with the exception of the wasp. I noted Kirby corrections on Cap's face in panel 5. Heck drew Cap's eye slots much bigger.

Avengers # 10, page 8, panel 6
I suggested the Giant-Man figure to Nigel, who agreed with me, noticing the gloves and Kirby's stylized anatomy. 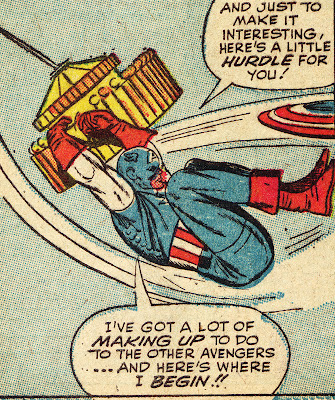 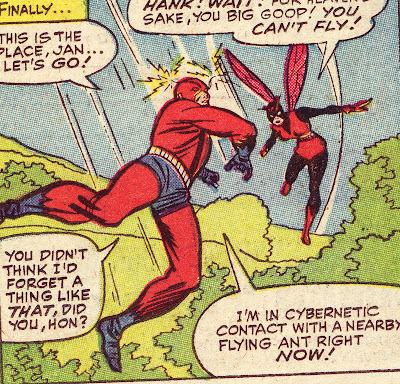 Avengers # 11, page 9, panel 3.
In Avengers # 11, pencilled by Heck and inked by Chic Stone, we find a Kirby drawn Giant-Man figure. Note the boots and the typical Kirby pose. 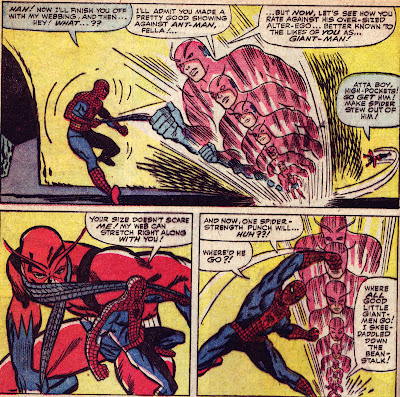 Avengers # 11, panels 1 and 3.
I pointed out the Giant-Man figure in panel one as being drawn by Kirby. Note the difference in style from panel 2, which is drawn by Heck. Nigel agreed and pointed out panel 3 also being a G-M Kirby. It seems obvious to me now, and I wonder if Kirby didn't have a hand on the Spider-Man pose as well.

This is one of the few panels Nigel and I disagreed on. Nigel believes this is a Kirby corrected Thor, but I feel this is likely Heck's work. Although the figure does have a Kirby-ish look, the pose, especially the left leg, looks more Heck than Kirby to my eyes. Also, note the hand which is touched up. Thor was clearly holding his hammer in his hand, but  in the previous scene Thor was without his hammer. Nigel was able to contact the great Chic Stone, who inked the issue. He had this important information to pass on:
" Jack did many "touch-ups" on other pencillers; work when Stan thought certain figures lacked dramatic impact."
Stone also belived that the Thor figure was "definitely pencilled by Jack" To Nigel's credit he admits that Stone's saying so doesn't make it positive. Artists sometimes are unable to discern styles, sometimes even their own after some 35 years had passed. 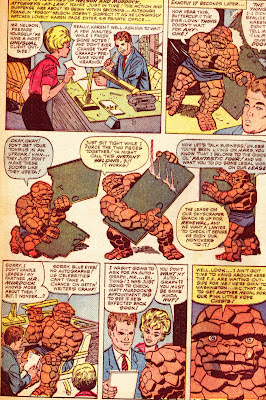 Daredevil # 2 June 1964, page 2 -Orlando/Colletta/Kirby?
I'll close with a few possible Kirby corrections that I pointed to in my correspndence with Nigel way back in June of 1999. The above page from the second issue of Daredevil is interesting. Many artists struggled with  drawing the Thing, from Steve Ditko to Dick Ayers. This version looks a little too close to Kirby's, and very different from Orlando's style. Unless Orlando swiped from Kirby, I suspect this was Kirby redrawing or fixing up Orlando's figures. Further evidence points to someone else working on the Thing, as I don't see  Vince Colleta's fine line inking on the figure. I'm uncertain if this is Kirby inking though. 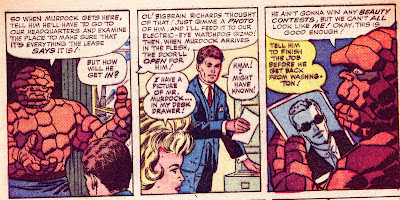 DD # 2, page 3
Here are a few more figures from page 3. To my eye they look very much like Kirby Thing figures circa 1964, particularly panel 3. The remaining panels which featured the Thing on this page are too small to decipher, but are likely "pure Orlando/Colletta" figures (why bother to touch up such small figures)?. Am I 100% convinced Kirby drew these panels?  Nope, but the evidence points pretty strongly to Kirby. 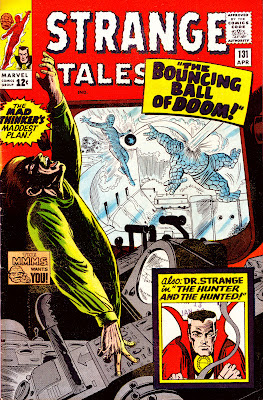 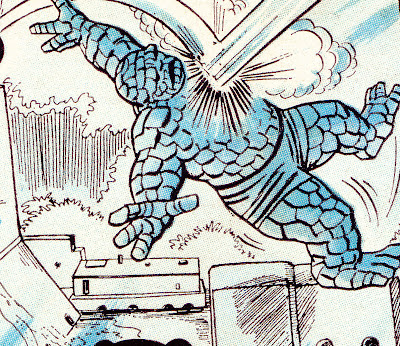 Thing figure by Kirby?
The cover to Strange Tales is clearly drawn by Bob Powell, but the Thing's pose, his hands and his figure bear the mark of Kirby. Powell's Thing looked more ape-like, and this figure looks very much like Kirby's original. 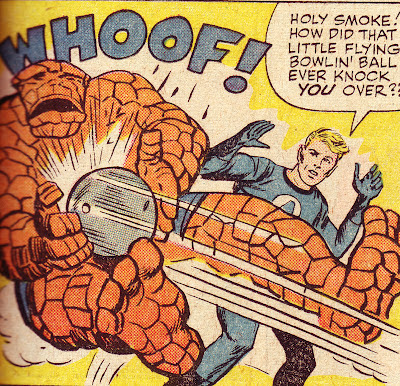 Strange Tales # 131, page 7, panel 5
Finally we have an interior panel from the same issue, drawn by Bob Powell, with inks by Dick Ayers. Again, the Thing's pose and figure have the Kirby look, although his features and poses in other panels drawn by Powell do not look the same. It is possible Kirby touched up a few other Thing figures in the story, but nothing jumped out at me like this panel did.
And there you have it, an examination of some of Kirby's possible correction work at Marvel. While Sol Brodsky was the production man at the time, there were time constraints, and Stan would likely want the characters to look right. If Kirby were in the office it would be best to go to him to make the changes, since he designed most of them. Stan was also not above asking anyone who walked in the door to fix a page or panel, as we've seen in an earlier post with Ditko correcting a Kirby panel. I find this stuff to be of immense interest (at least to me and Nigel), so I hope a few others do as well. In the future I may point out some interesting art fixes by folks like Marie Severin, Herb Trimpe and Paul Reinman.
My sincere appreciation to Nigel Kitching. I urge anyone interested in this post to seek out Jack Kirby Quarterly #  12 to read Nigel's complete article. The issue is filled with great artwork and features. The cover alone is worth the price, using Kirby's unpublished X-Men # 10 cover, nicely colored by Nigel himself.
Posted by Nick Caputo at 8:19 PM 15 comments:

Over the past few years I've been honored to write about the work of one of the most important, unique and distinctive artists in the world of comics - Mr. Steve Ditko - in DitkoMania. Rob Imes has been editing the revived publication, which was originated by Bill Hall. Rob's fanzine is a labor of love, and I like the fact that it is "home grown", put together the old fashioned way, with scissors, tape and tender loving care. Rob decides what to include, and his approach has been entertaining and thoughtful. While Rob has theme issues that often focus on Ditko's earlier work, he also reviews Ditko's latest output. I'm also in great company, sharing space with folks like Barry Pearl, Jason Sacks, Bruce Buchanan, Javier Hernandez, Dave Sim, Mort Todd, Batton Lash and Michael T. Gilbert (to name a few). DitkoMania has well thought out articles, wonderful artwork and a lively letters page. It's a real bargain, and I encourage anyone who enjoys the work of Steve Ditko to give it a try. You won't be disappointed.

You can also read some reviews of earlier issues of DitkoMania at this site:

I think they're quite insightful.


Robin Snyder has been publishing a newsletter entitled The Comics for decades (yes, decades!), and it is always filled with interesting articles by pros (Ditko has contributed many essays over the years, detailing his involvement on Spider-Man. Essential reading for those interested in comics history), letters and artwork on all facets of comic books.  Robin produces a unique publication that centers on the positive aspects of the medium. Like Rob, his newsletter is a solo effort, and his output has been phenomenal. How he put together 12 issues a year, while also publishing the latest work of Mr. S. Ditko (lately on a Bi-Monthly basis) is beyond me. I would be remiss if I didn't add another important fact: Robin is one of the nicest people I've had the pleasure to correspond with. I salute him!  Try a sample issue, and tell him Nick Caputo sent you! You can also order Ditko's latest output from Robin, as well as much of the work he has produced with Robin over the years, including gems like Static and the Mocker.


These are impressive, small press publications that deserve attention. They stand out in a sea of slick publications (although mags like Roy Thomas' Alter Ego, still has the same enthusiastic feel they began with, and Roy is another class act).  I hope fanzines such as Rob and Robin's continue to surprise and thrill me for many years to come.
Posted by Nick Caputo at 1:11 PM 6 comments: