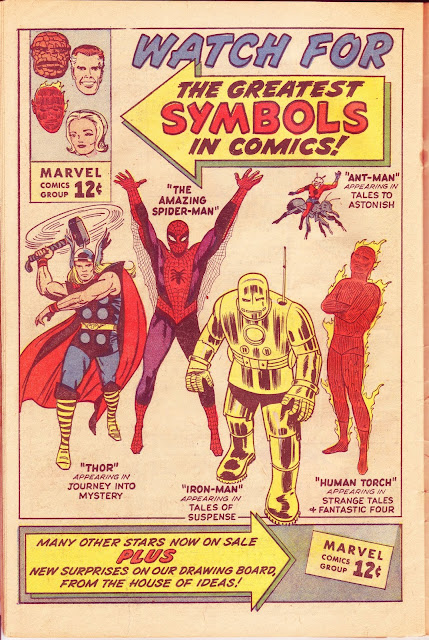 With the passing of Stan Lee the Marvel Age of Comics has ended. The triumvirate of Jack Kirby, Steve Ditko and Lee initiated an exciting, innovative and freewheeling atmosphere at Marvel Comics in the early 1960s. Lee had worked for decades as editor, writer and art director for publisher Martin Goodman's comics, previously known as Timely, followed by Atlas (before becoming Marvel) and produced countless successful, long-running titles, from Strange Tales to Millie the Model. In those years he collaborated with a plethora of talented artists: Syd Shores, Bill Everett, John Severin, Russ Heath, and one of the most prolific and versatile of them, Joe Maneely, who died a few years before the superhero boom. It was Jack Kirby, however, who rejoined Lee after Maneely's passing in 1958. He along with a small group of artists, notably Steve Ditko, began to revitalize the line, producing dynamic, entertaining and moody fantasy stories, featuring over-sized monsters and weird thrillers.

Lee utilized tropes he honed initially in romance and humor comics, incorporating them into the new superheroes that slowly overtook the monster titles. As co-creators of that era, Kirby and Ditko were no doubt instrumental in bringing a wealth of creativity and concepts to the table. Lee, however, led the charge as promotional wizard for the Marvel line. He infused everything - cover copy, replies to fan letters, editorial pages - with a child-like enthusiasm, making him the perfect company cheerleader. Most importantly, Lee conveyed a  bemused, self-deprecating mockery in a period when other editors echoed the tone of a stern school principle. From this framework Lee molded the "Marvel Comics Group" into an entity which was not only successful in terms of the bottom line (which was the primary concern of publisher Martin Goodman) but was critically acclaimed by older fans and cognoscenti of the medium.

There are those who have questioned Lee's persona, opining that it was all an affectation. I don't believe so. I think Lee was a big kid who never quite grew up. My conclusion is based on personal correspondence, which often displays the same jocular writing style. From 2009 or so I began to email Lee (thanks to my pal Michael J. Vassallo), sometimes on serious questions related to the field, other times in a more humorous vein. Lee always replied to my emails promptly, and they were clearly his words, not those of an assistant. That raised the bar in my respect for him, because he could easily have ignored, or had someone else reply, to my missives. I thought I'd share a few here in tribute to the man.

In this email dated March 27, 2008, Lee replies to a question I asked about how important he felt letters pages and fan interaction were:

Stan often seem the most energized when I sent him satirical letters. In this one, dated June 21, 2009, he follows up on a joke I made about one of my favorite goofy villains, Paste Pot Pete:

My email to Stan on learning about Disney purchasing Marvel, dated September 8, 2009:

Since Stan often employed humor in his stories so I inquired as to what comedians he admired (December 16, 2009):

From March 6, 2010. My comment on a cameo video (was this really at the Academy Awards?) and his reply:

From June 22 & 23rd, 2011, I questioned Stan on some of the editors who he looked up to in the comics industry and received a serious and illuminating response:

I'll end with another aspect of Stan Lee that I admired, his forward-looking attitude. I wrote him lamenting the superhero movies and my belief that they would replace the comics themselves. His reply, from May 24, 2012:

And there you have a glimpse of Stan Lee, not under the lights of a camera or surrounded by throngs of fans at a comic con, but in one-on-one personal correspondence. I think these words gives a glimpse of his true personality, one that echoed throughout his career and brought a buoyancy to the countless comics he authored over the decades.
Posted by Nick Caputo at 7:01 PM 16 comments: