When one thinks of Marvel Comics and characters interacting in their shared “world”, many assume this began with the early 1960's super-hero line, when Stan Lee had the Fantastic Four meet the Hulk and Spider-Man. While crossovers clearly grew in the Marvel Age, they didn't begin with them. Lee liked the idea very early on; one of his text features in the 1940’s had the Torch, Captain and other Timely heroes meeting. The inspiration likely came from several sources.

On radio the incredibly talented and popular Jack Benny had a friendly "rivalry" with Fred Allen and both occasionally guested on each others shows. 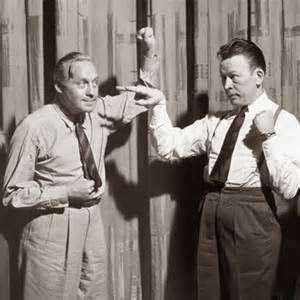 The Battle of the Century! Jack Benny (on the left) and Fred Allen (on the right) were two comedians who were friends since vaudeville days. Their jibes at each other lasted for decades, moving from the radio into Benny's television show.

In movies Universal pictures successfully paired two of their monsters together in Frankenstein Meets The Wolfman (1943). They followed with more team-ups and genres even collided when Abbott and Costello met Frankenstein. 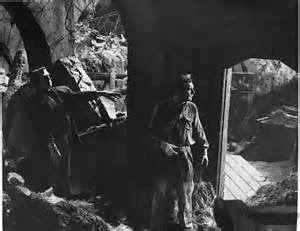 A moody scene from the first (and best of the lot) Universal studios meeting of monsters. Bela Lugosi as the Monster; Lon Chaney, Jr. as the tortured  Laurence Talbot. Both monsters would be an inspiration for Lee and Kirby's Hulk.

Authors such as Jules Verne had supporting characters appear in different novels, and Edgar Rice Burroughs had Tarzan journey to Pellucidar in one of his novels. 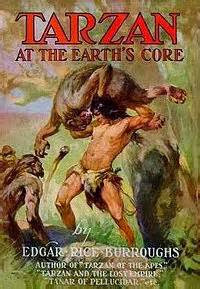 J. Allen St. John art to the 1930 hardcover edition of Tarzan At The Earth's Core

Characters in pulps met each other, and television had early examples. In researching I discovered that Ann Southern’s character from Private Secretary met Lucy on the Lucy/Desi Comedy Hour in 1957 (both, not surprisingly, CBS shows). It's also interesting to note that other shows were often referenced on situation comedies such as Bachelor Father or Leave it to Beaver. These are often asides, but they were an easy way to promote other network shows, much like Lee would later promote his line with short captions.

While super-heroes were often paired together on covers, they rarely met inside the pages. One of the most important exceptions was the confrontations between the Human Torch and Sub-Mariner in the 1940's, but when superheroes faded out in the latter part of that decade, there was little interaction between feature characters. For the most part this continued into the 1950's, although exceptions occurred. One crossover appeared in Combat Casey # 10 (June 1953), where Battle Brady guest-starred in one story (I'm Comin' to get ya, Penny..", illustrated by Robert Q. Sale). Both characters were written by Hank Chapman, which made it a simple procedure. The crossover was not publicized on the cover, and is likely known to only a few Timely-Atlas die-hards (Tom Lammers, who discovered and mentioned the story on the Timely-Atlas Yahoo Groups some years ago being one of them. Thanks Tom!)

In the early 1960's Stan Lee was inspired to promote the "girl line” of humor comics and did so with gusto. 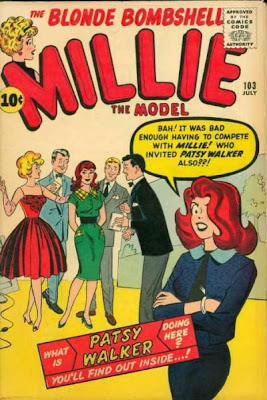 Millie the Model # 103, July 1961. Before Fantastic Four made it's way to the newsstands the following month, Lee had Patsy Walker guest-star, including a large caption and Chili directly addressing the reader. Stan Goldberg pencils and possible inks/colors (with Al Hartley likely drawing Patsy) and Artie Simek lettering. Image from the GCD. 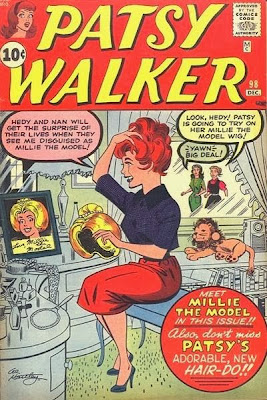 While it wasn't mentioned on the cover, Kathy # 14 has a 6 page opening tale by Stan's Lee and G entitled "A Visit to Patsy Walker".

And continuing the cross-over event that month, we conclude with another Millie title: 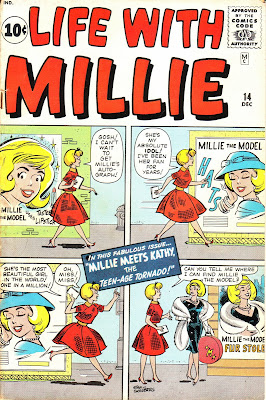 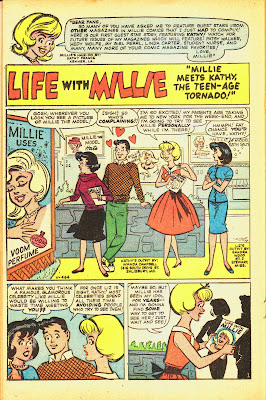 Millie introduces the story, giving Lee an opportunity to plug the other teen-humor strips. This is billed as the first guest-star issue, although others would follow. Millie's guests would not cross genres, although fictional versions of Kid Colt and Rawhide Kid appeared. Alas, Millie never met up with Spragg, the Living Hill or Johnny Storm (although it is established that Millie lives in New York City and Kathy is visiting from Ohio).

Although Lee's signature is left off this story, this was likely an error, as it is on all the other stories.
Pencils by Stan Goldberg and possible inks by George Klein. Artie Simek lettering. 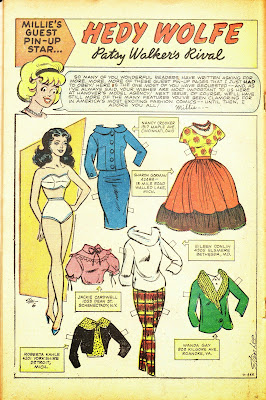 Even the feature page has a guest star! Hedy wears attire that Janet Van Dyne would never get past the Comics Code (but was allowed here because it was considered a comic geared to girls). Millie notes this is in response to requests for more guest star fashions, so I assume other characters appeared previous to this page. Lee script, Stan Goldberg art and colors (with a probably Al Hartley Hedy face) and Artie Simek colors. 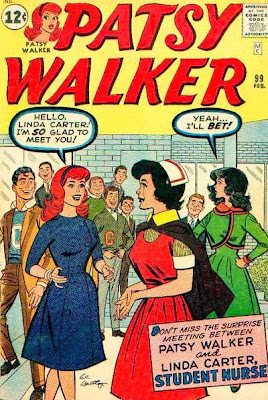 Two months later, in Patsy Walker # 99 (February 1962) Linda Carter, Student Nurse pays a visit to Patsy. Linda was a new title, also written and drawn by Lee and Hartley, and her third issue would have been on the stands at this point. The title only survived nine issues, and it would be another decade before another comic starring a nurse appeared at Marvel, Night Nurse, which lasted an even shorter four issues (now if only Linda would have gotten a job with a Doctor named Blake....)

Stan Lee clearly enjoyed promoting a line of titles and creating a "world" where characters interacted. This was quite easy when he was at the helm, and could easily coordinate such events. As superheroes became popular it made sense to do the same for them. At it's best it was entertaining and brought a sense of excitement to its audience. The small moments, when a character appeared in one panel or in his civilian identity were subtle. In later years the crossover idea grew to epic (and nonsensical) proportions, where anything goes and anyone can meet, no matter how preposterous. Once upon a time, though, there was a sense of understated charm orchestrated by a small group of individuals whose special touch made comics worth seeking out and enjoying. 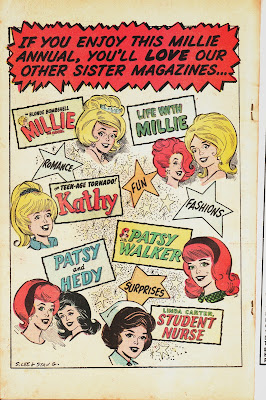