Originally published on September 30th, 2013, this is a revised and updated presentation.
This time out I'd like to share some odds and ends by that master of the graphic form, Steve Ditko, including a few obscure but noteworthy efforts. 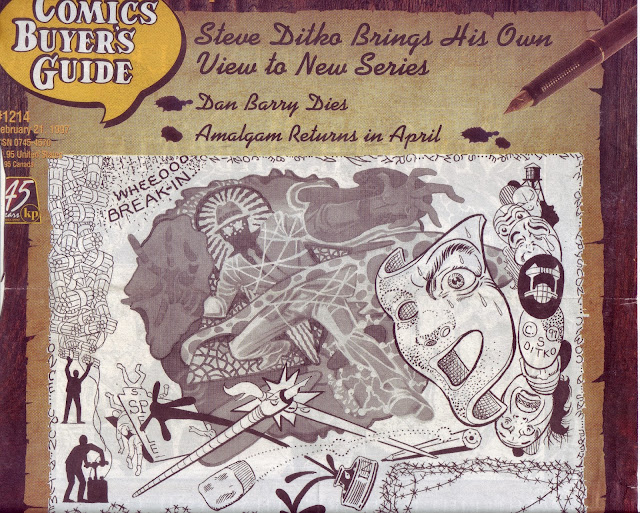 The above piece was drawn specifically for the cover of Comics Buyer's Guide # 1214, February 1997, promoting the first issue of Strange Avenging Tales, which was published by Fantagraphics. Ditko creates a visual feast, employing a wash-
tone effect to spotlight his creation, the Baffler. Ditko's agglomeration of images cascades around his central hero: faces, masks, words, barbed wire; silhouetted figures attempt mischief while the artist's working tools (pencil, pen, brush, eraser, ink bottle) frolic about animatedly. Most situations are connected to the interior stories, whetting the reader's appetite for what lurks inside the covers. 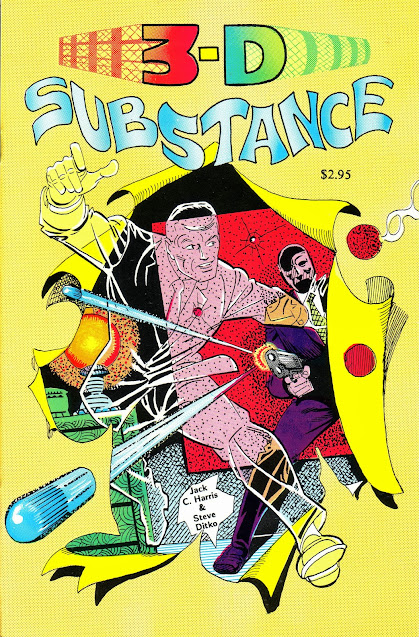 Created by Jack C. Harris, with designs and artwork by Ditko, Substance was a character who became invisible with the aid of a device. The first issue appeared in 1990 for publisher Ray Zone. Ditko does an effective job with the 3-D technique, using depth perception to good advantage, enhanced by Ray Zone's expertise. In his introduction Jack C. Harris wrote about the concept:

"Substance came about from conversations with Steve Ditko about crime, justice, good, evil, etc. We supposed, if "illegal evidence" could be collected without active participation by the police, could it be used to bring about justice? After all, even if evidence is "inadmissible" it might still proclaim the truth. And isn't the truth the goal of every trial? Are truth and justice the same thing? Maybe, maybe not."
Harris went on to discuss working with Ditko in the late 1970's and 1980's in his editorial capacity at DC on Shade, the Creeper (appearing in World's Finest) and various mystery and sci-fi stories. Harris later created Star-Guider for Western publishing with Ditko; it eventually saw publication in Robin Snyder's Revolver at Renegade Press. Harris explained:

It's unfortunate that so many ideas were left floundering, especially at a time when independent publishers were plentiful. How many characters, ideas and stories  have fans lost out on seeing or being developed? Harris concluded:

"That very night I went home and outlined Substance. With Steve's art in hand, in August, I headed for the San Diego Comic Convention to pitch the idea to the publishers in attendance. I got as far as Ray Zone's booth. Looking at the presentation piece both Ray and I said (simultaneously) "an invisible man in 3-D! Wow, what a concept!" 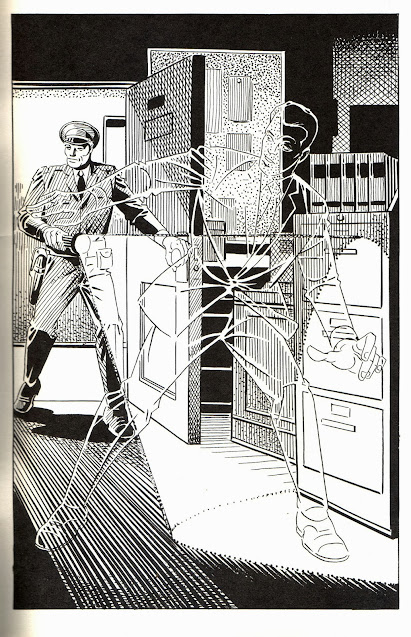 An attractive, non 3-D image on the inside back cover of 3-D Substance # 1.

Included in the first issue were some of Ditko's 1950's Charlton covers along with a Crime and Justice story, adapted into the 3-D format by Ray Zone. 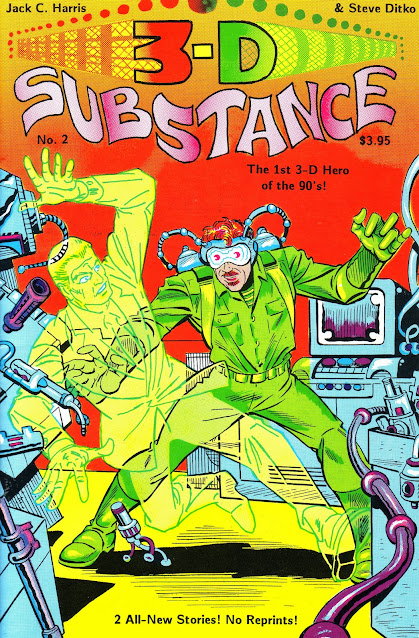 Cover to 3-D Substance # 2. The villain of the piece, with those goggles, reminds me of Hambone, a character invented by Sandy Becker, who was a staple of New York City local children's television in the 1960's. For those of you who are not in my age category, do not reside in the US, or have NO idea what I'm talking about: Local stations once employed hosts in between cartoons such as Bugs Bunny, Heckel and Jeckel and Popeye. They performed skits, featured puppets and advertised for their sponsors. Sandy Becker was also a voice actor on radio ("Young Doctor Malone") and (here's the comic book connection, kids!) was the voice of Steve Rogers/Captain America on the 1966 Marvel Super Heroes cartoons. 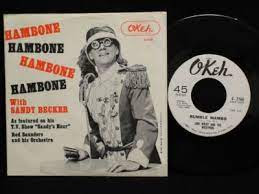 The inimitable Sandy Becker as "Hambone" See a resemblance? 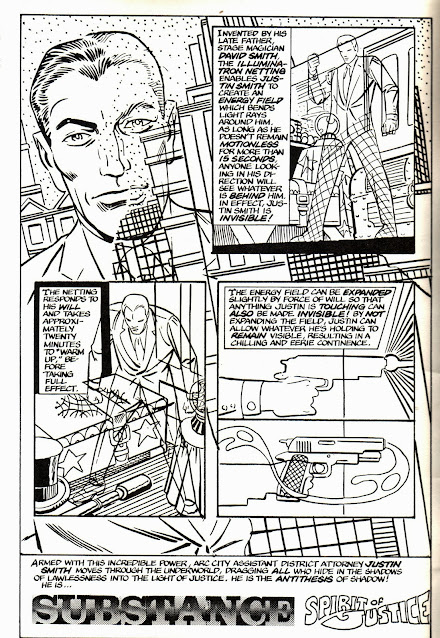 A second issue of Substance appeared in 1991 featuring all-new material before the title faded away. It was an interesting strip, worthy of continuation, with or without 3-D techniques. 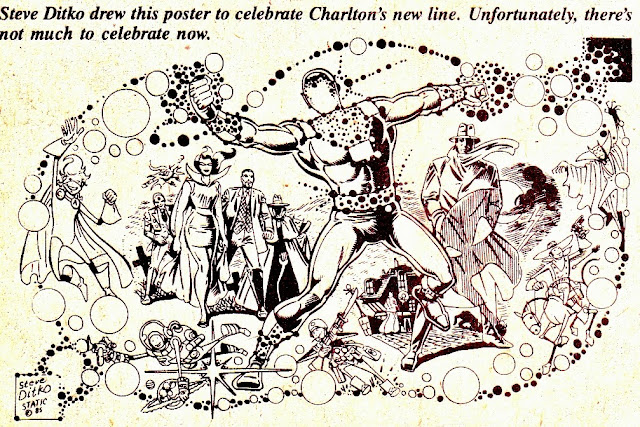 This ad for Charlton's line appeared in fanzines, including the Comics Journal # 105 and Amazing Heroes # 82 in 1985. The figure in the middle, Static, was originally published by Eclipse Comics, moved to Charlton, and later collected and published by Robin Snyder. Charlton's hosts from their Ghost line appear in the background: The Mysterious Traveler, Dr. Haunt, Mr. L. Dedd, Dr. Graves, Winnie the Witch and Mr. Bones, all drawn by Ditko during his decades-long association with the company . 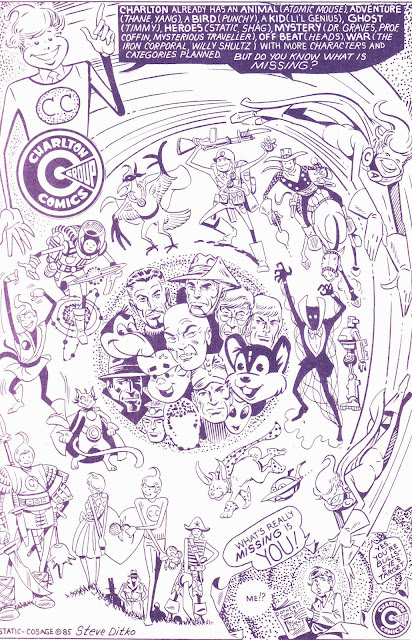 I'll conclude with another Charlton ad, penciled, inked, lettered and likely written by Ditko, including his first and only interpretation of heroes Yang and Thane. Another rare, charming and delightful surprise was seeing Ditko's interpretations of characters catering primarily to a younger audience such as Li'l Genius, Timmy the Timid Ghost and Atomic Mouse! (all of which were then appearing in reprinted comics.) The ad spotlights a playful artist who clearly enjoyed the variety in Charlton's titles and could have illustrated anything with a sense of purpose and integrity to the material. This was a last ditch effort to promote the Charlton line, which - unfortunately - closed their doors in 1986.

I hope you enjoyed this look at a potpourri of Ditko's unusual efforts in the 1980's and 1990's. It points to a body of work that is endlessly fascinating and always worth investigating.