Note: The following is a blog post that was originally presented on July, 28th, 2011.  Some of the content has been updated but the general tone has been retained and I've left some of the topical comments as is. (More on Ditko, indeed!)

One of my earliest forays as a blogger finds me spotlighting Steve Ditko's contributions to comics. I believe it's entirely justified, and even incumbent upon me, for such an oversight would be comparable to chronicling the history of the New York Yankees and ignoring the achievements of Babe Ruth or Mariano Rivera. I encountered Ditko's art at a very young age and was captivated by it virtually from the start. Why did his particular style resonate with me on such a visceral level? While searching through my memories one image surfaced with vivid clarity: an Amazing Spider-Man panel where a gang of criminals are fleeing. Ditko's composition was brilliant in its simplicity, showing the miscreants from the waist down, clearly startled by the Spider-Signal illuminating the pavement. I observed how their trousers swayed rhythmically, with a sense of bone and sinew underneath (that's how MY clothes moved when I walked!). Even a six or seven year old recognized that the artist drawing these pictures had done his homework, providing an underpinning of authenticity alongside the fantastic elements.

Ditko's work is distinguished by an understanding of what makes a comic book work. Following the lead of artists he admired (Will Eisner, Jerry Robinson, Mort Meskin) Ditko was able to delineate figures, forms, settings and people with a knowledge of the real world. Ditko studied how clothing flowed against a body in motion and innately grasped the complexity of hands and muscle structure. Like master cartoonist Alex Toth, Ditko was able to make the complex simple by knowing what to include and what to excise. 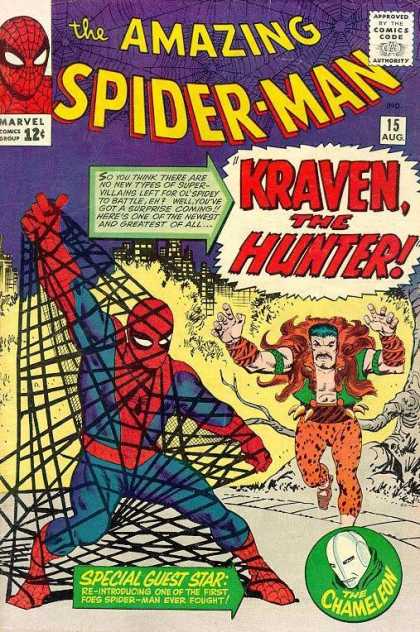 Ditko brought a sense of realism to his characters by not turning them into superhuman powerhouses (not that there's anything wrong with that - but more on Jack Kirby in future posts). Another early recollection is the cover to Amazing Spider-Man # 15, the elements of which Ditko orchestrated with masterful precision. Every piece of information adds to the excitement: Spider-Man in the foreground, struggling to free himself as his pursuer approaches. The park setting is established by trees and rocks, capped off by a city landscape in the background. Unlike DC characters, who often faced absurd or gimmick-laden situations, Ditko's heroes were vulnerable and their predicaments transpired (as in this example) on the borderline of possibility. The curiosity of prospective buyers was probably aroused considerably in trying to guess HOW Spider-Man would escape. I know I was completely captivated by it. 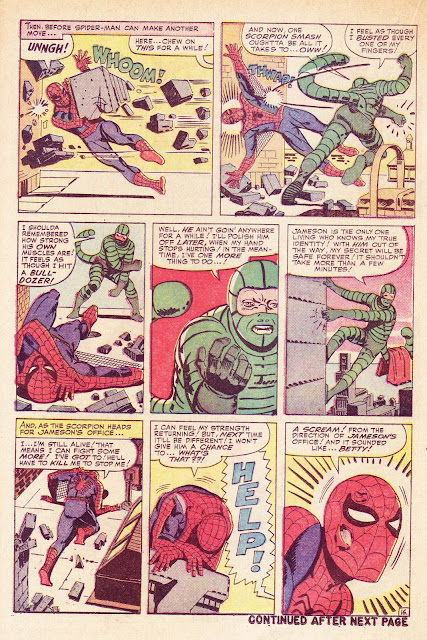 Rarely did a hero get a beating like this in comic books! Spider-Man's rouges gallery, including the Scorpion, were a distinct threat - more like the maniacal Richard Widmark in Kiss of Death (1947) than Superman's Lex Luthor. Ditko made this clear by Spider-Man's crumpled posture and with little touches such as his torn costume. It also made a strong point; that doing the right thing had consequences. Amazing Spider-Man # 20, January 1965, Dialogue/co-plot? by Stan Lee; lettering by Artie Simek; coloring likely by Stan Goldberg.

Ditko imbued his pen and ink creations with a palpable sense of fragility. They could get bruised and battered (although, due to Comics Code restrictions they could not bleed, certainly not in 1965) and had to use their intelligence to outwit opponents. Ditko plotted out stories with a level of thought and deliberation that was rarely reflected by his peers. Revisiting his work invites new observations and further analysis in much the same way one studies the oeuvre of Alfred Hitchcock or Miles Davis. 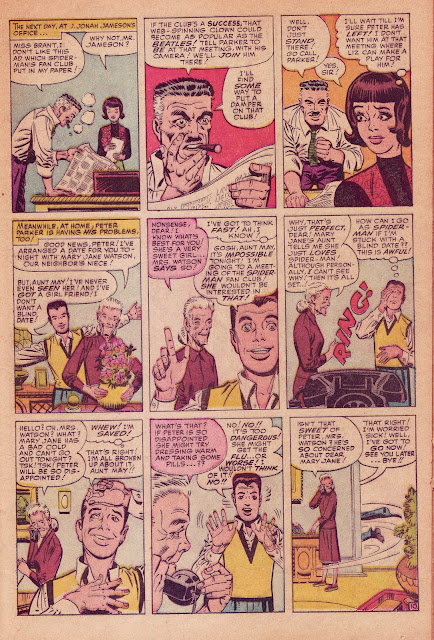 The above page encapsulates Ditko's ability to relay information and distinguish each character with distinctive personalities, often refining them over time. Two examples that would be appropriate here include Aunt May, originally drawn as a heavyset woman and Jonah Jameson, whose mustache was trimmed to the extent that it gave him a Hitlerian appearance. Amazing Spider-Man # 17, October 1964.

Another aspect of Ditko's art that immediately appealed to me was his whimsical nature, accentuated by an almost silent movie clarity through facial expressions and body language, most notably the use of hands as a tool to depict emotions. Some of these techniques were no doubt mastered by studying the industry's greatest storytellers (including newspaper strips such as Chester Gould's Dick Tracy and Harold Gray's Little Orphan Annnie, which were likely a strong influence on Ditko's artistic formation.) With the dexterity of a trapeze artist Ditko balanced fantasy elements essential to superhero comics alongside more down-to-earth situations. Whether it was Peter Parker frantically attempting to avoid a blind date, or, at the other end of the spectrum, plagued by doubts and fears that seemed insurmountable to a teenager, Ditko undoubtedly raised the bar in his chosen field.

Ditko is an original. Unique, offbeat, compelling. Now in his 80s, he continues to draw comics. There are those who chose to denigrate the man on a personal level, criticizing his choices or seeking to invade his personal space. I've read too many articles, blogs and essays filled with distortions, inaccuracies and outright lies about the man which have nothing to do with constructive discussions about his work. I intend to pursue a more positive direction here. 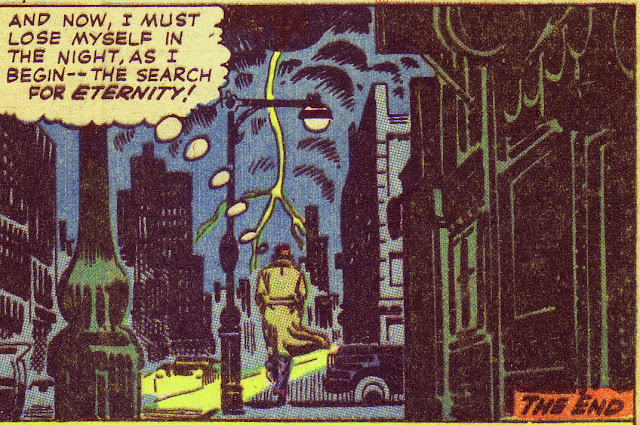 Ditko's final panel to the Dr. Strange story in Strange Tales # 134, July 1965, is an excellent example of the artist's skill at composition. The reader's eye is directed to the solitary figure of the hero walking the dark, lonely streets of Manhattan. Much like his own distinctive characters, Ditko has always followed his own path.

(I hope my efforts over the years investigating the world of comics and the creators who have made it endlessly fascinating continue to be worthy of attention and I thank so many of you who have offered comments and criticism.)

Hear, hear! One certainly doesn't need to agree with Mr. Ditko to admire his brilliant cartooning! And sure, it's easy to say he's "wasting his talents" doing the kind of stuff he does but seriously, don't you think he's more than earned the right to create what HE wants?

Another influence you neglected to mention is Joe Kubert. Some of Ditko's earliest stuff is at first glance nearly indistinguishable from contemporary Kubert work.

I might add that I was just discussing with my wife yesterday that if I absolutely had to choose one cover that epitomizes the Silver Age of Comics, I believe I'd pick AMAZING SPIDER-MAN # 25...by Steve Ditko.

I'm glad you enjoyed the post. Some argue that it is Meskin's influence on both artists that comes through in Ditko's early work. Ditko has never cited Kubert as a direct influence, but my own thoughts are that Kubert was an influence early on.

ASM # 25 is a sensational cover, but I'd have a hard time to pick one image from that period. there were so many exceptional covers by folks like Ditko, Kirby and Wood, to name a few.

I'll be following your blog to read your thoughts on all things comics.

As Booksteve says, when people say Ditko is 'wasting his time' on his personal comics, I can't think of a more misinformed statement. He can't be wasting his time if he's doing exactly what he wishes to do. Maybe plenty of people would have rather seen him working at Marvel with a writer, but that would have been a complete waste of his time!

Thanks for joining in. It's a bit foolish for fans to be wasting their time being upset over Ditko's choices. No one is forced to read or buy his current output if its not to their liking, but to spend time attacking it makes no sense. If you like his earlier work than discuss that, don't make it a personal vendetta against the artist.

Whatever happened to your Marvel Genesis blog?

That's not my blog, its run by Don Alfasi, which is on my favorite list. I hope it will return soon.

Last week I scanned a bunch of stories from the '70s monster reprints and have been enjoying reading the Ditko monster stories. They are simultaneously sparse, cute, and a little eerie too. Looking forward to more Ditko posts!

Thanks Jacque! That's a good description of Ditko's stories. I'll be back with more Ditko content, although there may be one or tweo other artists you'll enjoy me posting on in the meantime.

Well, you're good at what you do best. That's all i'll say.

As soon as I'd finished reading that, I wanted more. Looking forward to your further musings on my absolute favourite Silver Age Marvel artist ...

Thanks Alan. I'm glad you enjoyed it. There is always something new and interesting to discover in Ditko's work: the sign of a true talent.

This is great. Thank you. I’ve been looking at #27 (“Bring Back My Goblin to Me”). Do you know if it pissed Ditko off that Stan used the phrase “sloppy seconds” *twice* in the same issue?

Also, that dude at the competing newspaper (the globe?) that Peter sells his pix to in that issue, but he’s too inquisitive, and he has a weird-ass combover? that’s got to be based on someone from DC right

The combover is just too damned weird. It’s in the middle of his head. That had to be based on someone real that they were making fun of.

Actually I think Ditko based the Globe editor on a character actor. I recall seeing that face on (I believe) an episode of the Twilight Zone.

I was part of the lively discussion in your comments section following Ditko's passing. This year being what it is, I finally wrote out a thing I've been wondering at for over a dozen years now, concerning a creation of Ditko's. It's possibly apocryphal, but I feel it's a kind of closure (blessed closure!), although as it's the kind of story which perhaps all of 23 people might "get" I don't really know what to do with it, but to share.