Note: This post was originally published on November 30th, 2012. I was inspired to resurrect it (revising some content) with the express intention of directing aficionados of the war genre - and the Atlas line in particular - to a couple of noteworthy books. The first of those, Atlas at War! is an impressive undertaking, showcasing an array of talents, including Russ Heath, Don Heck, John Severin, Syd Shores, Gene Colan, Hank Chapman, Paul Reinman, Carl Wessler and Jerry Robinson. It was edited by Timely/Atlas historian (and my pal) Dr. Michael J. Vassallo, and reprints four of the Jack Kirby stories discussed below:
https://www.amazon.com/Atlas-War-Dr-Michael-Vassallo/dp/1682474704/ref=sr_1_1?crid=32GMYIYHLUOK8&dchild=1&keywords=atlas+at+war+marvel&qid=1607655407&sprefix=atlas+at+war%2Caps%2C361&sr=8-1
The Complete Kirby War & Romance quite specifically aligns with my piece, since it will collect the entirety of Kirby's war stories for Atlas/Marvel, from his initial effort in Battlefield to his seven issue run on Sgt. Fury (of course, all the Battle tales examined here will also be included in the anthology). I was honored to assist with research and source material for the Omnibus, but the person who deserves the highest accolades is editor Cory Sedlmeier. His herculean efforts and unwavering dedication to presenting the material as close to the original form as possible, while never seeking the spotlight, is admirable. In my estimation he has always exceeded expectations.
You can pre-order the book (due on May 5th, 2021) on Amazon and other outlets:
https://www.amazon.com/Marvel-Love-Jack-Kirby-Omnibus/dp/1302922084 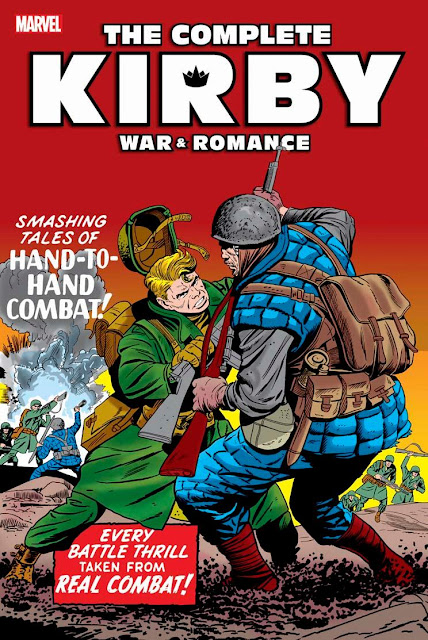 FYI (and courtesy of Cory) the above image is the one that will adorn the Omnibus, not the one pictured on Amazon.
I'd encourage everyone to add both titles to your bookshelves.
And now, back to my regularly scheduled post:
For my 50th post (I never thought I'd make it this far!) I will examine the 10 stories Jack Kirby crafted for Battle from 1950 until its final issue, dated June, 1960, capping its nearly 10 year run. In this piece I will delve into (pardon the blatant self-promotional reference) minutiae regarding Kirby's efforts in the genre, in the hope of encouraging others to seek out material worthy of recognition. In the past these comics were limited to hardcore fans, and then only those who could afford to purchase the originals. The above-mentioned prestigious editions will not only preserve the material, but allow for a wider audience in which future generations can study, appreciate and enjoy the work of an American original.

Always a versatile and prolific artist, Jack Kirby was particularly busy in 1959, illustrating monster, western and romance comics for Editor Stan Lee. In that period he was assigned work on the war-anthology title, Battle. Based on a detailed reading it appears that Kirby scripted as well as drew a majority of the pre-1960 vignettes. There are many similarities in style, tone, word emphasis, phraseology, use of quotation marks and sound effects that are indicative of the Kirby method. 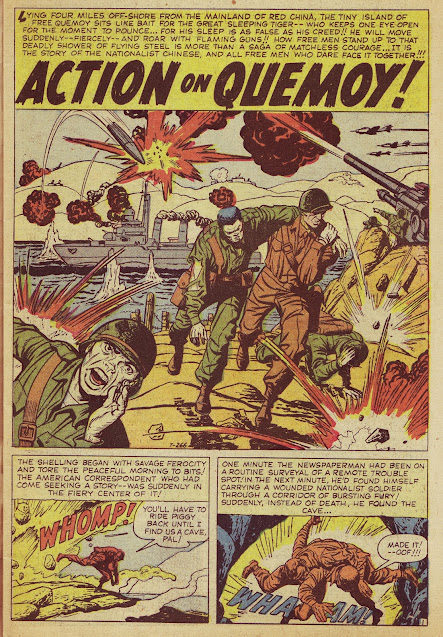 The opening narration echoes a Kirby tendency to employ a long paragraph of exposition (a stylistic tic observed in many of his 1970s scripted tales). There are other similarities, such as his use of sound effects. "WHAAM!" was a favorite, which appeared in his "Losers" stories some 15 years later. The tale centers on a lone reporter vying for survival in the midst of destruction, an ongoing theme of Kirby’s.

On page 5; panel 2, the caption literally shouts at the reader with words in all caps:

“WE ARE STILL ALIVE!” shrieked the sound! WE ARE STILL FIGHTING!” cracked the fury! “WE ARE STILL FREE!” thundered the echoes of rumbling in the torn and twisted steel!”

The words read very much like Kirby's edited and written stories for DC and Marvel in the 1970s. 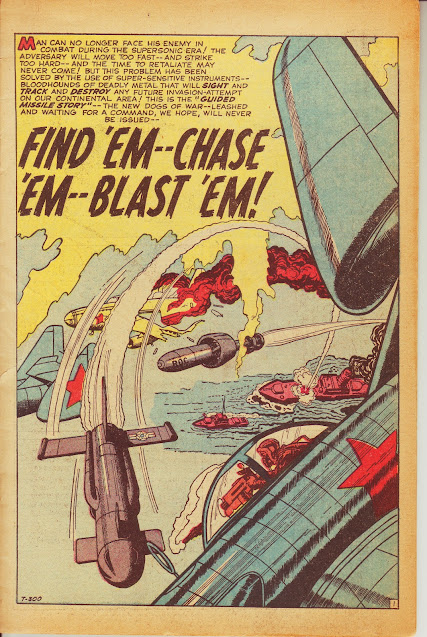 If THAT isn’t a Kirby title, I don’t know what is! The opening employs Kirby’s terse style, and there are numerous uses of quotation marks throughout the story, beginning on the splash page (“Guided Missile Story”). Sound effects such as "WHAAAM" are used. This story is about the weapons of war and how they grow more deadly and sophisticated. Kirby’s interest in technology was ongoing. 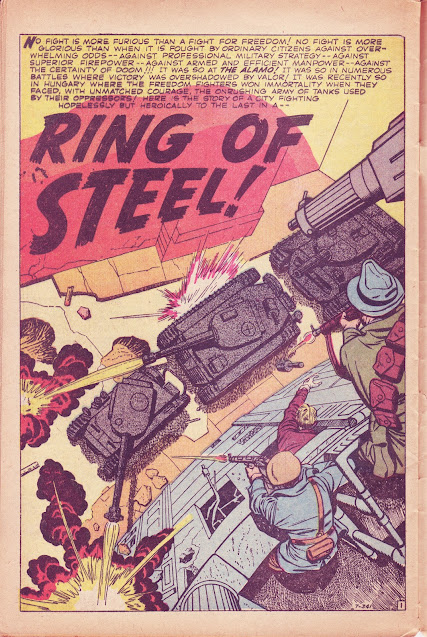 An overhead shot adds significant drama to Kirby's splash page.
"Ring of Steel!," Battle # 65, Jack Kirby story ?; Kirby pencils; Christopher Rule inks; Artie Simek letters. Job # T-341.
In Kirby’s second story in issue # 65 the threat of a tank attack rears its ugly head; a device that later surfaced in one of his "Losers" issues for DC. Kirby's narration is declarative and filled with trademark exclamation points. We again see the use of familiar sound effects. Hungarian freedom fighters battle against overwhelming odds, and Kirby somehow evades the Comics Code restrictions that demand a happy ending. The good guys DON'T end up victorious, although the character's bravery is evident. 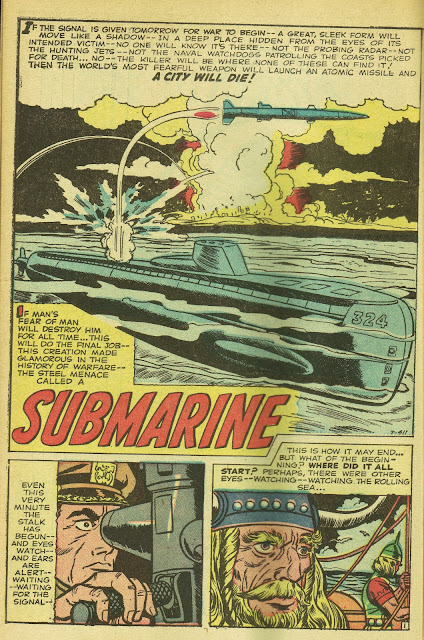 The history of submarines is the focus of this yarn, with the use of quotation marks in abundance. Kirby’s theme of asking the reader a question is also employed: "WHERE DID IT ALL START?,” as he transitions from the present to the past: images of a submarine commander segue to a depiction of a Viking at the helm of a medieval ship. We see this visual cue appear decades later in titles such as 2001: A Space Odyssey. 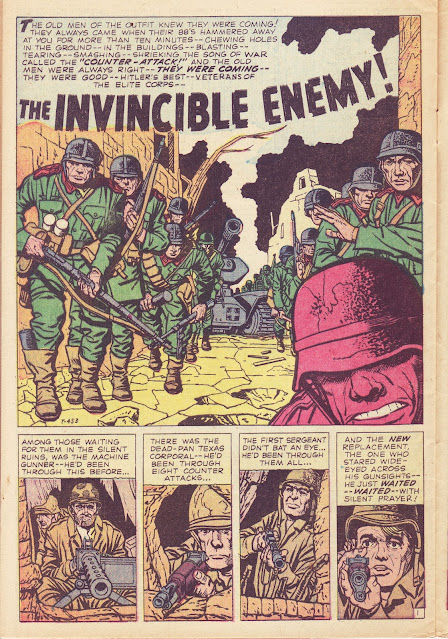 This story is worth studying in detail, due to evidence of the Comics Code Authority's heavy handed tampering. Kirby’s story centers on four soldiers preparing for an attack by Hitler’s elite corps. A close observation of the pages  confirms that Kirby originally had soldiers killed, although it appears there was a decree to conceal this in both copy and art. Beginning on page one a minor alteration appears; the opening paragraph has the word "veterans" re-lettered in a hand other than Artie Simek's, perhaps a substitute for "killers" or "butchers." 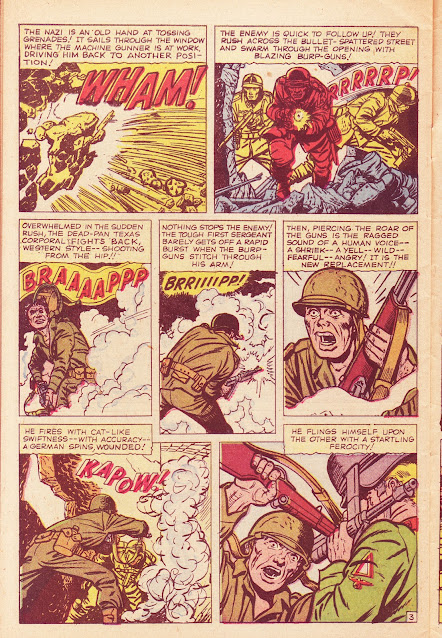 On page 3, panel one, the machine gunner is murdered, but the crudely lettered replacement copy ("...driving him back to another position") has him escaping. There are signs of art alterations on the right hand side, likely the area where Kirby had the soldier struck down. In the following panel, though, they forgot to white out his boots in the rubble, as can be seen on the lower right panel. 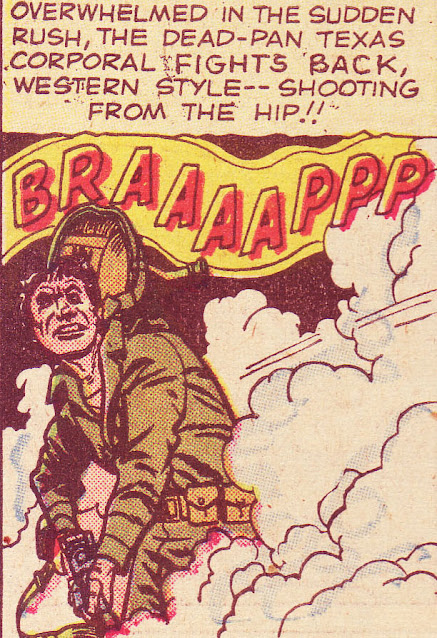 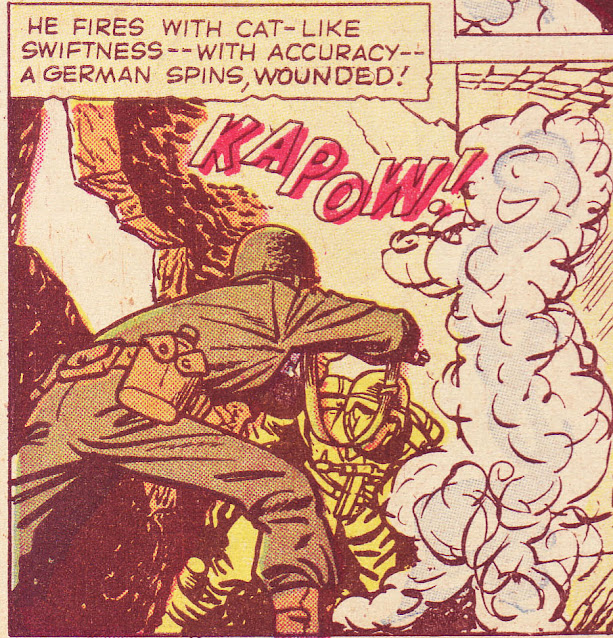 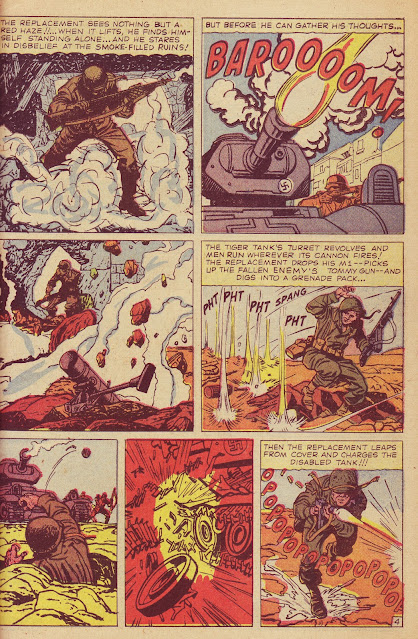 On page four it appears that the corporal and sergeant have also have been killed, although the art and captions do not convey this. 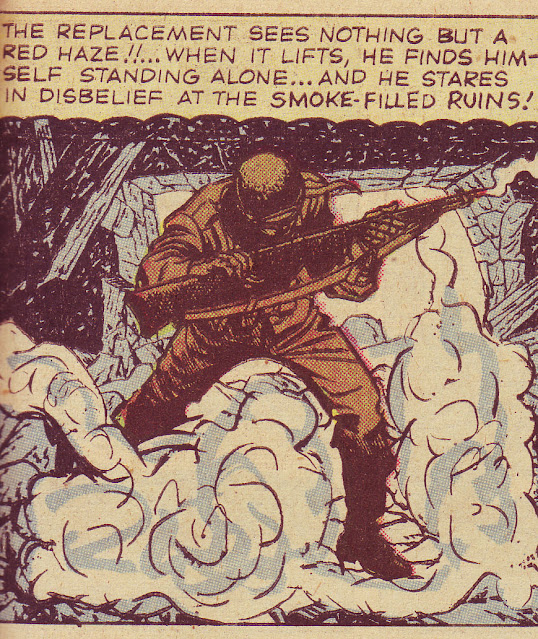 Large, hastily scribbled puffs of smoke are again used to hide dead bodies. The copy is obviously replaced in the last sentence:. "....he stares in disbelief at the SMOKE FILLED RUINS!." I suspect he was originally staring at his fellow fallen soldiers. Panel 3 also seems to be tampered with, probably deleting the body of the Machine Gunner. His weapon lies on the ground, the same one seen in page 1; panel 2. 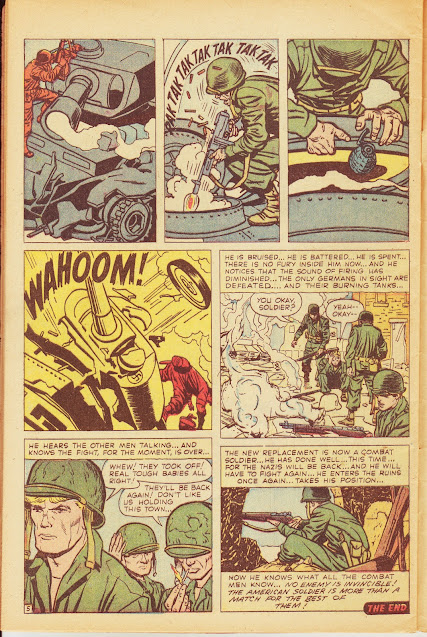 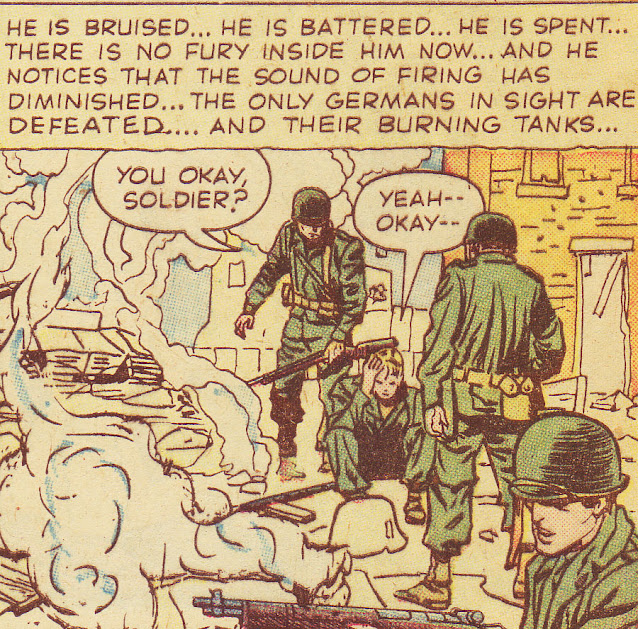 At the conclusion the young replacement survives, taking out a tank. Other soldiers come along to assist him, although there is no mention in the narrative that they are his group, and they do not look like the men on page one. In panel 5 the word "DEFEATED" is substituted for another word, and the obligatorily puffs of smoke replace dead bodies. 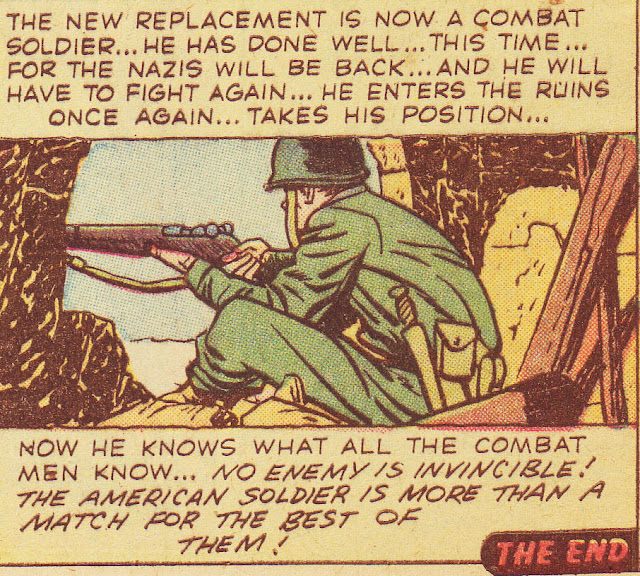 The final caption was modified, beginning with:  "..no enemy is invincible!.." Kirby's expurgated text surely focused on the harshness of war and its devastating impact. Kirby's depiction of a rookie overwhelmed by his experiences, but surviving nonetheless, is considerably weakened by the Comics Code, which depicts a war without casualties or consequences. As a private in the army during WWII, Kirby lived through such horrors and knew their reality. 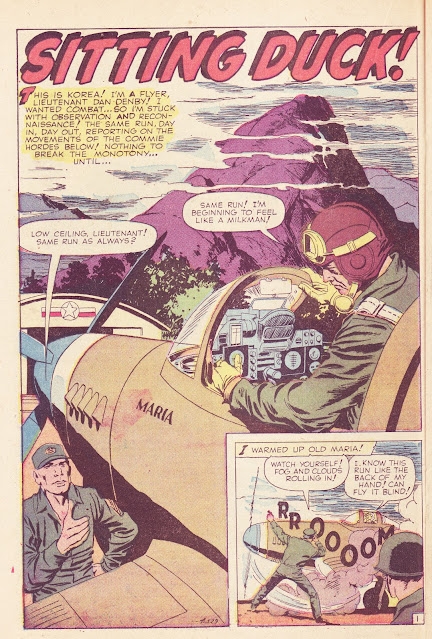 This short story, wonderfully inked by Al Williamson, focuses on a Korean flyer. I'm not convinced that Kirby wrote the dialogue; although some of it evokes the usual Kirbyisms, none of the tell-tale signs appear: no bold words, sound effects of stylistic touches that I can discern. I suspect this was either heavily edited by Lee, or possibly a Lee plotted/Larry Lieber scripted story (the team that reportedly worked on many of the unsigned pre-hero monster tales). 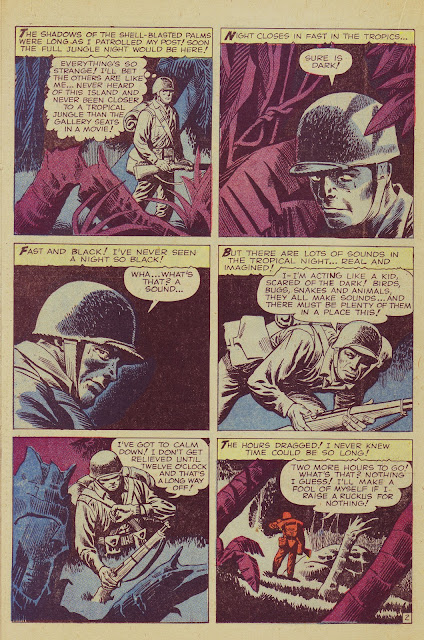 Steve Ditko’s superb embellishment adds crispness and moodiness to Kirby's pencils. Ditko’s inking was very much influenced by John Severin in this period, and his delineation over Kirby was impressive (further complimented by Stan Goldberg's coloring). This is another tale of a young recruit facing his baptism of fire, but the writing reads more like the Lee plotted/Lieber scripted stories appearing in the fantasy line. Around this period Kirby became heavily involved in drawing stories and covers for Lee's entire comic book line (minus the girl-teen humor titles) and his solo scripting chores seems to have tapered off. 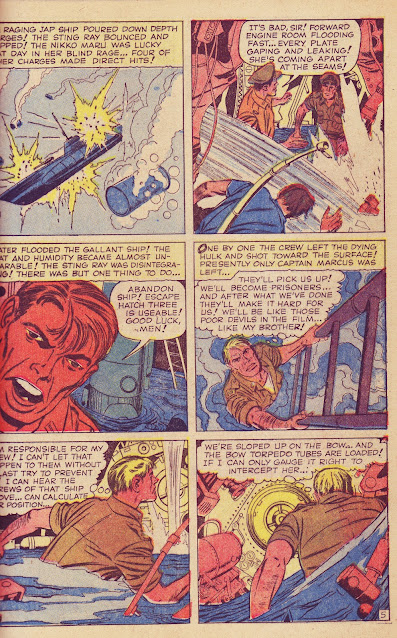 The  tale of a submarine crew facing the Japanese has a few Kirby tics, including the use of quotation marks, so this may have been scripted by Kirby and edited by Lee. This story is an example of an early Joe Sinnott-inked Kirby story. 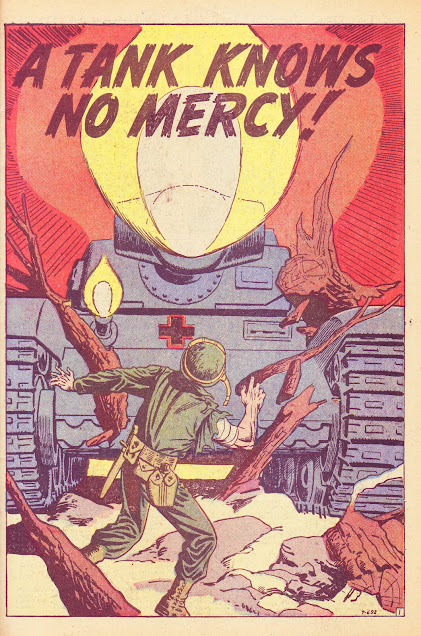 “A Tank knows no Mercy!” opens with a wordless pictorial, a choice that Kirby rarely, if ever, used on his own. The silent splash did follow the pattern of other Atlas fantasy stories, which leads me to suspect this was a Lee plotted/Lieber scripted tale. Ditko once again provides exquisite inking, and the art drips with atmosphere. The plot again focuses on the threat of a tank and a lone soldier protecting a family. 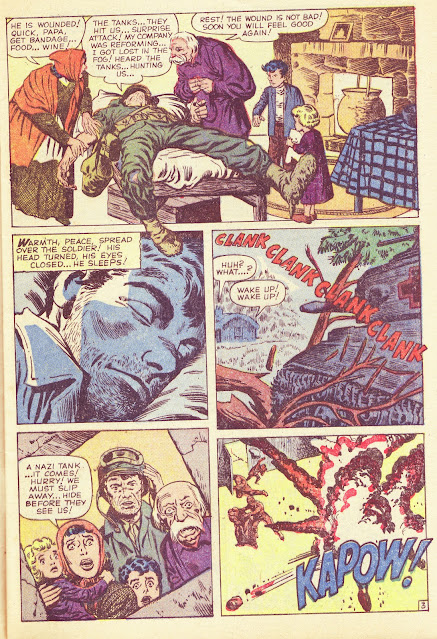 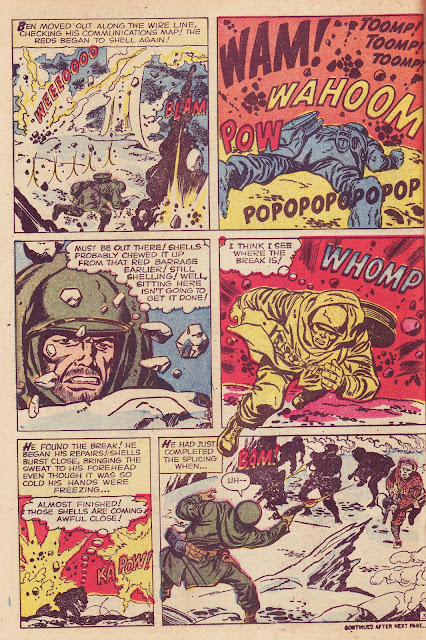 "The Thick of Battle!" features an early inking job by Joe Sinnott, who, in just a few years, would bring a lustrous sheen to Kirby’s pencils on The Fantastic Four. The tale involves the heroism of a linesman in the signal corps during the Korean war. Aside from the use of sound effects in a few panels (Kirby may have penciled those in while drawing) the story reads like a familiar Lee/Lieber tale.

And so ends Kirby’s Battle run, consisting of ten stories and seven covers, an often- neglected part of the artist's oeuvre. Kirby's attempts at graphic realism, despite the heavy-handed, often corrosive presence of the Comics Code, focus on the turmoil, grief and atrocities facing individuals in the midst of madness. Derived largely from his personal experiences during World War Two, these slices-of-life would be repeated, dramatized and embellished by Kirby in Sgt. Fury, "The Losers" and countless comic books, in ways both obvious and subtle, throughout his extraordinary career.

For a definitive history of Atlas War comics, including discussion of the above Kirby stories, go to Michael J. Vassallo's blog (That name sounds familiar...)