The Mystery of Kevin Banks

In the early 1970s Marvel attempted to capture a segment of the audience they had not focused on for many years. Comics geared towards young children were selling well for other companies, specifically Archie Publications, Western/Gold Key, Harvey and Charlton, and since sales figures at the time indicated that the superhero line was weakening, as further evidenced by the cancellation of X-Men, Silver Surfer, Doctor Strange and Nick Fury, Agent of SHIELD, publisher Martin Goodman began to diversify, hoping to attract new buyers. An inexpensive way of achieving this goal was to dip into his vast Timely-Atlas inventory, which included war, western, jungle, horror and romance material.

Only one new title was created, Harvey, "inspired" by Archie's successful group of comics. Initially written by Stan Lee and illustrated by Stan Goldberg, who was a veteran colorist for Timely/Atlas/Marvel and had drawn various teen-romance titles, including the popular Millie the Model. Later issues were produced by Stu Schwartzberg and Henry Scarpelli. Running sporadically from 1970-1972, Harvey lasted only six issues and didn't cause the Silberkleit's (Archie's publishers, for those of you not "in the loop") to lose any sleep. 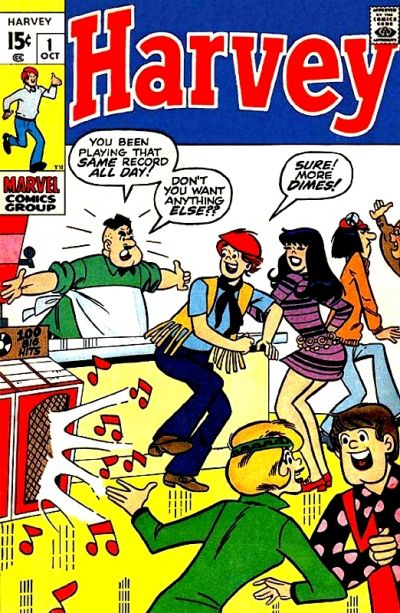 Just because it looks like an Archie comic that doesn't mean it sells like an Archie comic! Stan Goldberg, who had recently drawn the Archie gang (and would spend most of his later years working for them) provided the cover art (and likely coloring); lettering by Morrie Kuramoto, Harvey # 1, October 1970. Image from the Grand Comic Book Database.

The bulk of Marvel's foray into children's comics lay in their past, where they had a wealth of features available. They consisted of a Casper the Friendly Ghost copy, Homer the Happy Ghost (brought back from the dead - excuse the pun - because Casper comic books continued to fly off the stands) by Stan Lee and Dan DeCarlo; Lee and Joe Maneely's "Dexter the Demon", which was re-titled, with the lead character slightly altered, as Peter the Little Pest and Li'l Kids/Li'l Pals which featured reprints of Howie Post's "Little Lizzie". Beginning with issue # 10, though, a brand-new series debuted. 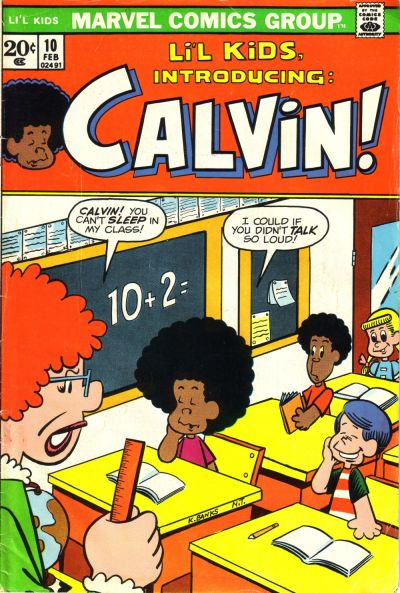 A new masthead adorned Li'l Kids # 10, likely designed by Danny Crespi, a long-time letterer/production man. The proper title was minimized with the name "CALVIN" boldly emblazoned on the cover, emphasizing the lead feature, a humorous strip featuring an African-American child. The cover is signed "K. Banks", along with the initials N. T., which I assume is the inker. Unfortunately, I'm stymied as to who those initials belong to. 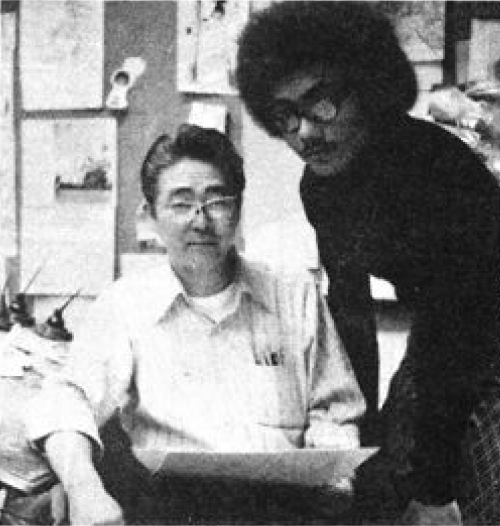 Banks (standing) posing with long-time letterer/production man Morrie Kuramoto in the Marvel Bullpen circa late 1972 or early 1973. Banks would have been 16 years old in 1972. Photo from Foom # 2, Summer 1973.

A photo of Kevin Banks appeared in Foom # 2, a fanzine produced by Marvel. "Behind the scenes at the Marvel Bullpen" focuses on the office production/editorial staff. Banks is referred to as "Li'l Pals" artist, with no further information. 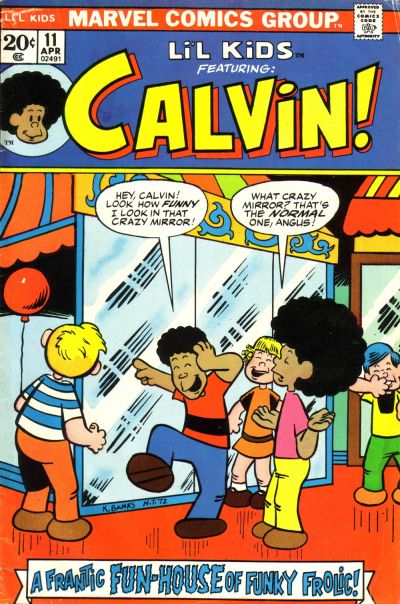 Cover to Li'l Kids # 11, April 1973, by Kevin Banks and "N.T." While "Calvin' was the lead feature, Timely/Atlas humor strips continued to be reprinted.  Image from the Grand Comics Database.

Little has surfaced over the years about Kevin Banks or his short tenure at Marvel. I've quizzed folks who were there at the time, including Roy Thomas and Tony Isabella, but they have no recollection of the man. I've scoured the internet and have come up with few answers, although some details have surfaced since I originally wrote this post in 2012.

Most importantly are first-hand accounts by people who knew Banks personally, helping to fill out some pieces of the puzzle. A woman who dated Banks informed me that he was born in 1956, placing him at age 16 when he first drew Calvin while interning at Marvel. Others who wrote in the comments section confirmed Banks living in the Bronx, with one person recalling him working as an artist in some capacity for the New York Daily News. It remains a mystery WHAT he drew, though. A comic strip? Single-panel editorial panel? Filler art? My friend and fellow comic book detective Michael J. Vassallo has been researching and collecting The Sunday News comics and thus far has not discovered any strips with Banks' by-line.

The most intriguing information came from B. Cameron White, a professional artist know as Shakor, which is worth quoting:

"I was born and raised in Brooklyn, New York and attended the High School of Art and Design where I met Kevin Banks.As comic book art lovers we quickly became friends .We were high school students in the 10th grade when Kevin landed the job at Marvel drawing "Calvin". Kevin was artistically talented way beyond his years. I was inspired and challenged by his creative genius to reach his level. I was so excited about his internship with Marvel because we often dreamed of becoming artists for Marvel and Kevin accomplished just that! I bombarded him with questions about the staff at Marvel and what artist did he meet? ,Did he meet Adam Austin? (Gene Colan), Jack Kirby? Steve Ditko????. As time progressed Kevin seemed to attend school less and less and eventually declared he was going professional and was gone. Have not heard from him since 1974."

Unfortunately the road ends at age 18, since Mr. White has not heard from Banks in 44 years. Nor has anyone else who knew him all those years ago. His last know address was in Florida and he has no presence on the internet. At this point in time (2018 as I write this) Banks would be 62 years old. 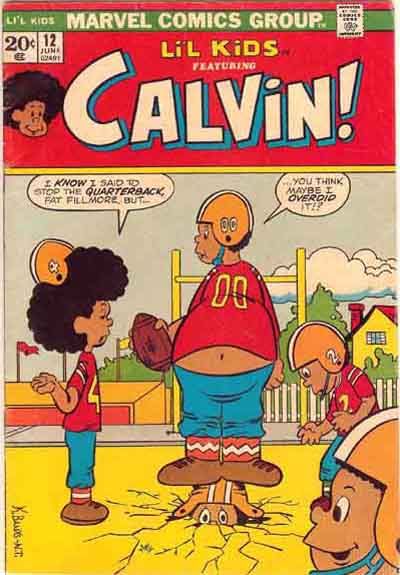 A Fat Albert-inspired scene appears on the third and final appearance of Calvin in Li'l Kids.

Li'l Kids featuring Calvin lasted only three issues, ending with # 12, June 1973. Marvel's children's line faded away as horror-related material such as Tomb of Dracula, Werewolf by Night and Man-Thing dominated in sales, and while Martin Goodman may have feared that superheroes were in trouble, they too survived.

Kevin Banks' name was nowhere to be seen at Marvel after his final Calvin story. Did Banks' only comic book work appear in three issues of Li'l Kids? Could he have drawn or written stories in obscurity at other companies, such as Gold Key, where creator credits were often non-existent? Was he employed at the Daily News or another paper? Or did he go into another field entirely? The questions remain unanswered thus far, but there is always a chance that Kevin Banks will surface to tell his own story.

If anyone has further information on Kevin Banks or knows his whereabouts please contact me at caputon66@aol.com. Maybe one day I can update this blog post with the heading: "mystery solved" with Banks recounting his experiences as an intern and artist at Marvel.

Postscript: All roads lead to other roads, some often surprising or exciting. B. Cameron White, AKA Shakor, knew Kevin Banks many years ago, but while White was a comic book fan, his muse took him on a different artistic path. He has an art gallery in New Orleans, but you can visit his website and take a peek at his distinctive work. One painting that impressed me greatly is  "Jazz Combo on Canvas":