The following analysis concludes my two-part examination on the early Dr. Strange stories. Please note: this is heavily revised and updated from its original presentation in Ditkomania # 73, June 2009.

Strange Tales # 111 (August, 1963), Dr. Strange’s second episode, introduces another recurring menace, Baron Mordo. It is quickly established that Mordo was a disciple of “The Master” and intends to use his powers for evil. Although the two battle in spirit form, they continue to throw punches in a traditional manner. Ditko was still exploring new ways to develop the strip's language. 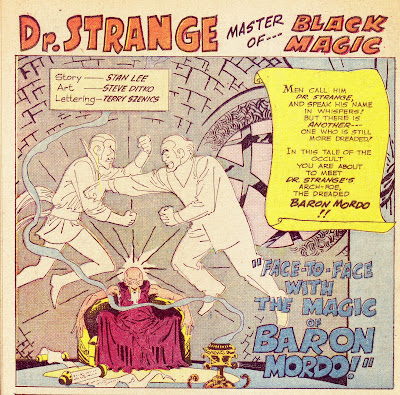 The feature went on hiatus for two issues (ST #'s 112-113), ostensibly to gauge reader interest, returning in Strange Tales # 114 (November 1963). In the interim Lee looked to reader reaction coming from letters and through fanzines, of which he took an active interest (as noted by his then secretary Flo Steinberg). Satisfied with the response, and perhaps with some prodding from Ditko, he decided to resume Dr. Strange as an ongoing series, although not without an unfortunate shifting in personnel.

The artwork in # 114 is considerably weakened by the absence of Ditko's precise inking over his pencils. Since Marvel was a small operation in that period, Stan Lee often called on his freelancers to roll up their sleeves when a crisis arose. Being a reliable professional Ditko stepped into the breach from time to time, hurriedly inking other artists when necessary (in one famous example he completed background art, along with production man Sol Brodsky, on Daredevil # 1). Credits on the Dr. Strange story in ST # 114 inaccurately have Ditko named as solo artist, when in fact George Roussos is the inker. The lack of an inker credit indicates a last-minute decision. In comics, the letterer receives the penciled art, which is then passed on to the inker. If Lee was aware that George Roussos was going to ink the story he would have written his name on the original art for the letterer to copy. While Roussos was a fine artist in his own right, his often rushed work (by his own admission) led to unexceptional results. In this period Ditko almost always inked his own pencils to great effect; they were sorely missed on the Roussos inked Dr. Strange stories. 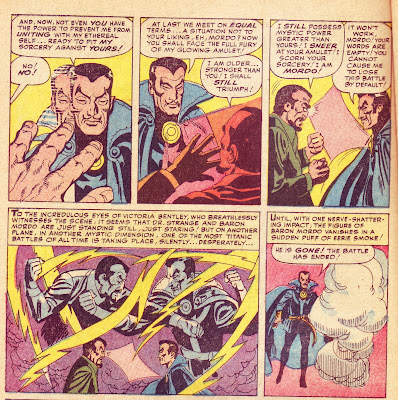 Beginning in Strange Tales # 115 (December, 1963) the feature expanded to eight pages*, allowing Ditko to open up with a full splash page and less cramped panels. At some point (perhaps as early as the third installment) Lee took an active hand in the plotting. Lee likely felt an origin for Dr. Strange was essential. Ditko tended to avoid giving characters a back story, believing their identity was formed by their beliefs (Mr. A., The Missing Man and "Killjoy" are a few examples). Lee used origin stories to define characters. Ditko returned to complete art (pencils and inks) on this episode, continuing in that position until issue # 120, with George Roussos' brushwork reappearing in the next four stories (Strange Tales #’s 121-124). 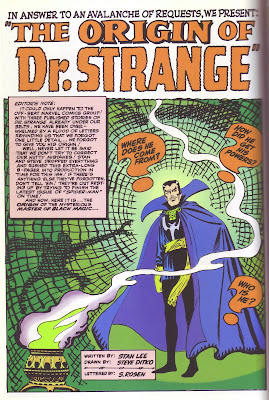 Lee's editorial note on the splash page offers a lengthy explanation on why Dr. Strange began without an origin story and alludes to "a flood of letters." Although the blurb is consistent with Lee's hyperbolic writing, there may be a shred of truth in his comments. With this story the strip was lengthened by three pages (soon raised to ten pages, the standard length of a co-feature) and in a few months Dr. Strange was the cover-featured guest-star in Marvel's top-selling title, The Fantastic Four. While clearly on the periphery of the traditional Marvel hero type, Lee was beginning to incorporate the character into his comic book "neighborhood".

“The Origin of Dr. Strange” takes us back to a time when Stephen Strange was a brilliant surgeon motivated by greed and ego. A car accident damages the nerves in his hands making him unable to operate. Devastated by the loss he wanders the streets, lost in self-pity. Overhearing rumors of an "Ancient One" who possesses mysterious powers the desperate Strange journeys to Tibet in search of a cure. Sensing a glimmer of humanity within the man, the Ancient One creates an illusion to detain him. Mordo, who we met in earlier stories, is also a student of the mystic arts, seeking wisdom for his own dark purposes. Mordo’s plans are eventually uncovered by Strange, but a spell renders him mute. It is at that point that Dr. Strange decides to study the mystic arts and thwart Mordo's schemes. 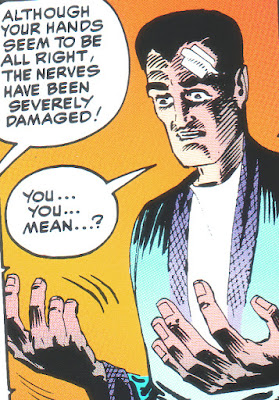 There are signs that point to Lee’s plotting this story. The theme of a character facing an epiphany, learning from past errors and rising above their failings was often a staple of Lee's stories, as exemplified in the origin of Spider-Man. Ditko’s solo heroes were self-assured and clear in their recognition of good and evil. Dr. Strange is a hero with total conviction in his abilities; prepared to face every obstacle in his path. It is telling that under Ditko's watch the ordinary, flawed Steven Strange is never mentioned again.

Dr. Strange's antecedents may include Lee Falk's Mandrake the Magician, one of the earliest comic strip characters of its type, and the radio series Chondu the Magician (Lee recalls the opening quite vividly). This author has listened to a number of these shows and notices an influence. Ditko and Lee were both of an age when radio was a daily form of entertainment. The "theater of the mind" stimulated one's imagination in visual ways unique to the medium. Both men have referenced radio programs, and likely listened to thrillers such as Light's Out, Inner Sanctum and Suspense. 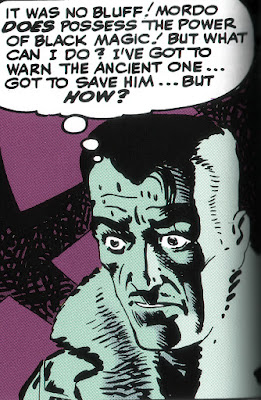 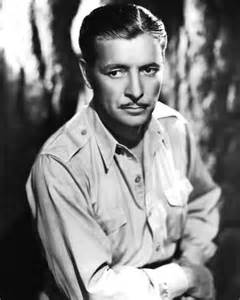 Distinguished screen star Ronald Colman played many heroic roles and may have been the visual inspiration for Ditko's "new look" Dr. Strange.

Stephen Strange’s trip to Tibet in search of an ancient wise man was derived from the movie version of James Hilton’s popular novel, Lost Horizon (1937) which starred Ronald Coleman. The plot was used in an earlier attempt at a magical hero, the “Dr. Droom” feature in Amazing Adventures, which Lee likely plotted. As postulated by comics’ historian Barry Pearl, Ditko, who inked the initial story over Jack Kirby pencils, may have observed a weakness in the concept and decided to create something more original. Ditko later reworked characters such as The Hulk and The Blue Beetle with superior results. 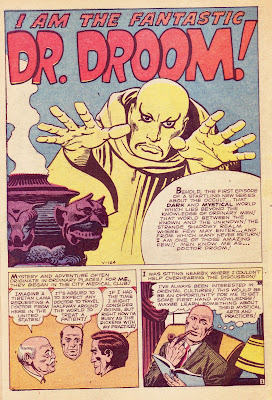 "I Am the Fantastic Dr. Droom!", Possible Stan Lee plot and Larry Lieber script; Jack Kirby pencils; Steve Ditko inks, Artie Simek letters, Stan Goldberg colors. Amazing Adventures # 1, June 1961. "Dr. Droom" appeared in only five episodes, occupying the back pages of Amazing Adventures (#'s 1-4 and 6) and abruptly faded into obscurity. The stories were typical fantasy fare that failed to define the character or make him unique in any way. Whether consciously or not, Ditko, who inked the tale, put all the ingredients together a short time later on Dr. Strange.

The elderly and all-knowing mystic was a staple of books, movies and radio. This prototype would be further developed as "The Ancient One" in the pages of Dr. Strange.

While the early Dr. Strange stories began to establish a style and provide the hero with offbeat protagonists (Baron Mordo; Nightmare), there was a tendency to tread familiar ground that typified the monster line, including aliens (“The Possessed”, ST # 118) and haunted houses (“The House of Shadows”, ST # 120). Ditko has stated that these were Lee plots, as was the use of Thor, who made a cameo appearance in hopes of enticing fans to follow the strip (“The Challenge of Loki” ST # 123). Ditko claims Lee was having problems coming up with ideas, hence the use of outside writers (golden age writer/artist Don Rico penned one story). Ditko also blames Lee for utilizing George Roussos as inker; Lee rarely had his artists produce a complete job (Ditko was the exception) feeling they would be more valuable and productive with others handling the inking.** 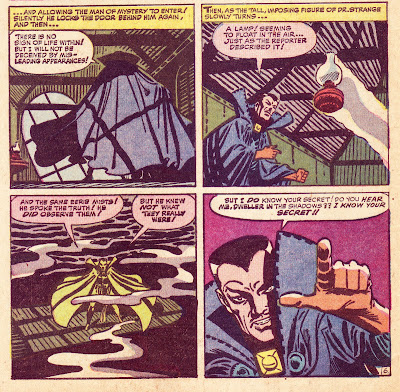 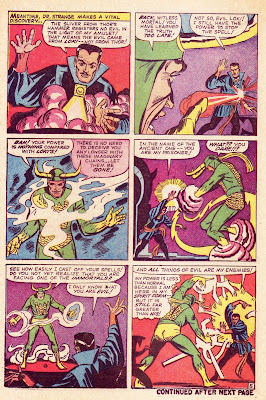 Three examples of Lee plotted tales. While they are entertaining enough, the first two are typical of the fantasy stories that permeated the pre-hero monster era; the latter features two guest-stars from a popular Marvel title. Lee often mixed his characters together, creating a fictional world where anyone could interact. While this concept was popular with fans, Ditko had his own ideas - he wanted to deviate from comic book cliches and seek out unexplored territory, unencumbered by the baggage of outside continuity.

Judging by Ditko's accounts he likely began plotting the stories on his own starting in Strange Tales # 126 (November, 1964), which coincides with his return to full time inking, although he wasn't officially credited until Strange Tales # 135. As he took over the reins he developed an ongoing serial that cemented the ideas he had been formulating for over a year. Ditko conceptualized a unique visual vocabulary that went beyond mundane traditions: mystic gestures, ornate dimensions encompassing open spaces and unknown pathways; out of body conflicts taking place in never-never lands or above the heads of unsuspecting pedestrians. It was a breathtaking display of what an artist with a brilliant and constantly probing mind can bring to life with paper, pencil and ink. 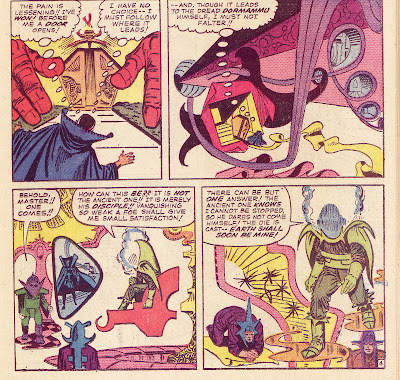 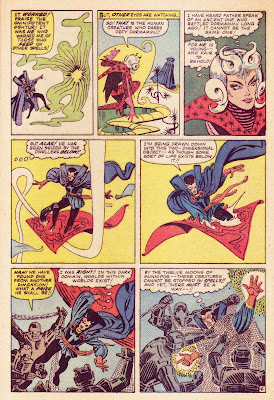 Ditko’s run on Dr. Strange is one of the most imaginative in comic book history. Lee stepped up to the plate by providing suitable dramatic dialogue, wisely leaving his predilection for humor to other, more appropriate features. While Dr. Strange developed slowly, the seed had been sown in the very first story. Ditko was always methodical in devising characters and stories he had a hand in, constantly seeking a fresh approach. While countless writers and artists have been involved with Dr. Strange over the decades – quite a few extremely talented in their own right - they have all dipped into the vast cauldron of originality Steve Ditko left them.


* By Strange Tales # 120 the page count grew to nine pages, where it remained until issue # 126 when it expanded to 10 pages, the standard page count for co-features in the anthology titles.

** Ditko’s other assignments from Lee in the time period covered in this article (Strange Tales # 110-125, cover dated July 1963-Oct 1964) includes the monthly Spider-Man and the first Annual; a three issue stint penciling Iron-Man (Tales of Suspense #'s 47-49); assisting on backgrounds in Daredevil # 1; penciling the Hulk in Tales to Astonish # 60 and inking over Jack Kirby in Strange Tales Annual # 2; a back-up story in Fantastic Four Annual # 1 and the Giant-Man story in Tales to Astonish # 50. In addition Ditko was doing full art on Gorgo and Konga stories for Charlton.