If you had the original comics you might have ignored Marvel's reprint titles, but occasionally new or unpublished inventory surfaced, nestled in the back pages and appearing without fanfare. For the fanatical collector who is compelled to have it all (something I'm quite familiar with, in case you haven't yet noticed), these are treasures to be sought out, akin to an unreleased track from a favorite band or musician appearing on a compilation CD. Displaced stories would sometimes find a home in Marvel Tales, Ka-Zar and Marvel Super-Heroes, (The Angel, Tales of the Watcher and the 1950s-era Human Torch being a few examples) and pin-ups were often used to fill up pages. Most were either procured from earlier comics or manufactured by using images from covers, splash pages, tee-shirts or pasted together from a variety of sources. Unused artwork was most likely discovered unexpectedly, mixed among FF or Spider-Man stats and used as needed. One such example is this Ditko Dr. Strange pin-up, published for the first time in Marvel Collectors' Item Classics # 10, August 1967. 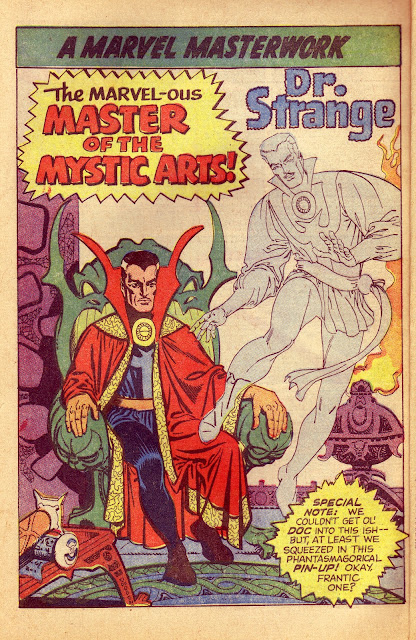 Well over a year had passed since Steve Ditko quit Marvel, so this was certainly not a new illustration. The copy on the right, likely scripted by Roy Thomas, only noted that Dr. Strange (whose stories were reprinted in chronological order beginning with MCIC # 3) was absent in this issue and the pin-up was a substitute. The unanswered question is: where was the drawing originally scheduled to appear? Submitted for your approval are a few possible scenarios: It may have been intended for an issue of Strange Tales, around the time that pin-ups appeared throughout the entire line, circa January 1965 cover-dated issues. A Ditko Dr. Strange pin-up was featured in Strange Tales # 128, which had the hero gesturing while surrounded by an array of mystical dimensions; perhaps the quieter scene above was rejected by Stan Lee, who sought a more dramatic interpretation. It might also have been scheduled for the next issue but excised to make room for an in-house ad (one appeared in ST # 129). Finally, it could have been intended for inclusion in Amazing Spider-Man Annual # 2 (also published in 1965) which co-starred Dr. Strange. Whatever the case, it's truly a wonderful piece of artwork by Mr. Ditko on a signature character, and perhaps still a secret to many of his fans.

Marvel Collectors' Item Classics # 21, June 1969, included another treat, a pin-up of Medusa by a new kid on the block. 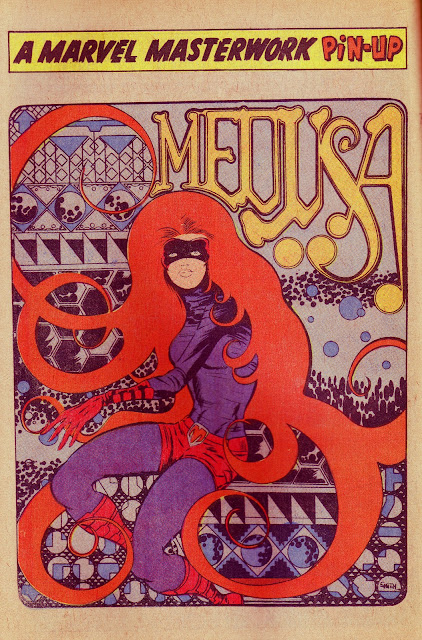 Only four months earlier, a British lad, then simply named Barry Smith (now known as Barry Windsor-Smith) produced his first work in the states, in a crudely drawn issue of X-Men (# 53, February 1969). As a teenager Smith had already been published in his native England, crafting pin-up pages of Marvel's superheroes for UK publisher Odhams Press (Terrific and Fantastic), many of which can be seen by perusing my pal Kid's blog:

Smith's art improved rapidly, from a Kirby-Steranko hybrid to a more stylized, classical approach. By the time this Medusa illustration saw publication Smith was drawing fill-in issues of Daredevil, Avengers and by the following year was on his way to recognition as artist/co-plotter of Conan the Barbarian.

Marvel's western titles began in the late 1940s and various iterations appeared on newsstands for three decades, with Two Gun Kid, Rawhide Kid and Kid Colt Outlaw being a few of the best sellers. While new material appeared in Western Gunfighters, Outlaw Kid, Gunhawks, Red Wolf and Rawhide Kid in the early 1970s, sales had slumped and reprints dominated from 1973 onward. Exceptions included a handful of illustrations, many crafted by up-and-coming talent who took a (pardon the pun) shot at drawing Marvel's western heroes. 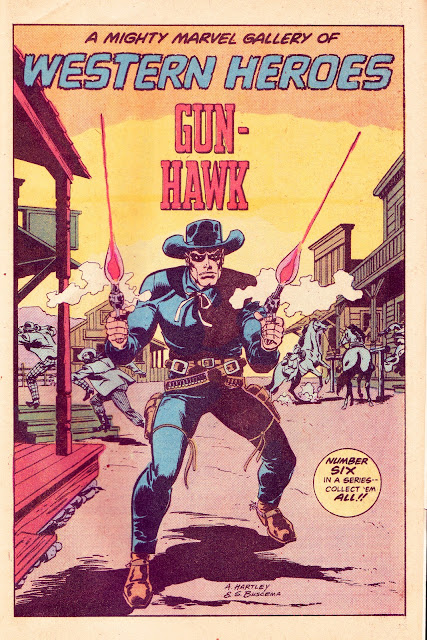 "Gunhawk" was a short lived strip that appeared in the 64 page (for 25 cents back in 1970 kids!) Western Gunfighters. The anthology title featured new tales of the Ghost Rider, "Tales of Fort Rango," "The Renegades" and "Gunhawk," alongside Apache Kid and Wyatt Earp Atlas reprints. The pin-up above is signed "Al Hartley and Sal Buscema," which I believe is inaccurate. The pencils are actually by Werner Roth. I was led to this conclusion when observing the splash page of the first "Gunhawk" tale in WG # 1, August 1970 (below). The credits read: Jerry Siegel, writer (yes, the very same co-creator of Superman, who did a little work for Marvel in this period); Werner Roth, artist; Sal Buscema, inks. 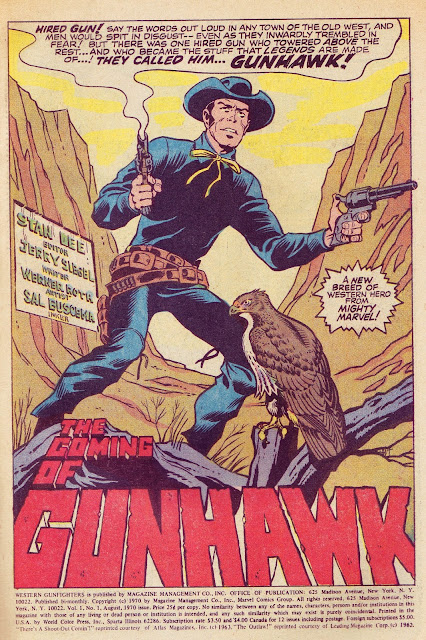 "Gunhawk" splash, Western Gunfighters # 1, August 1970
Roth's pencil credits were indeed correct for everything but the splash page, which was replaced by one drawn by an uncredited Herb Trimpe (lettering also differs from the interior story; Morrie Kuramoto who worked in production, did the honors there while Jean Izzo lettered the rest of the tale). Roth's splash may have been discarded for a more enticing image, and Trimpe, who worked on staff, delivered the goods by depicting Gunhawk in a tighter close-up, eliminating the background figures and positioning a hawk in the foreground, shifting the viewer's eye directly to the protagonist. A Marvel employee likely discovered the unused Roth splash in storage and incorrectly attributed the pencils to Al Hartley. 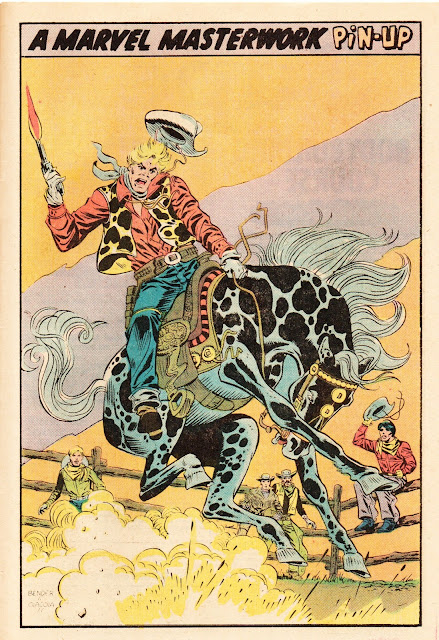 Howard Bender provided the pencils for this attractive pin-up, his first color work for Marvel, inked by one of the best in the business, Frank Giacoia. Bender began his comic book career working in the production department at Marvel, and later freelanced for a variety of companies and features, including Superman, "Dial H for Hero", Archie, and a Sherlock Holmes comic strip with Jack C. Harris, to name just a few. 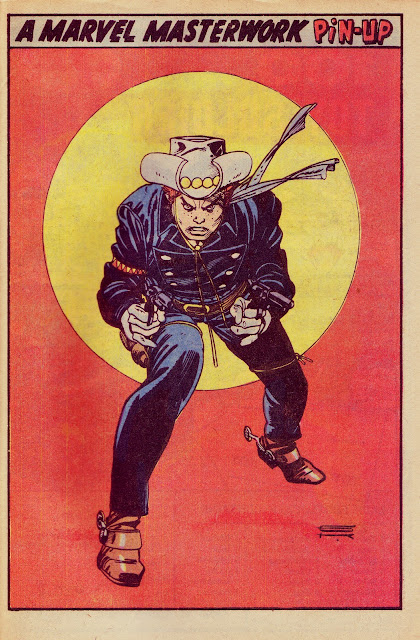 Gil Kane was a dynamic artist who enjoyed applying his craft to western-themed imagery. Along with John Severin, he produced the majority of new covers for Marvel's western reprints throughout the 1970s. I'm fairly certain this is a new drawing, not one derived from a cover. Kane's Rawhide Kid is a tough looking hombre, very much in the Jack Kirby mold. 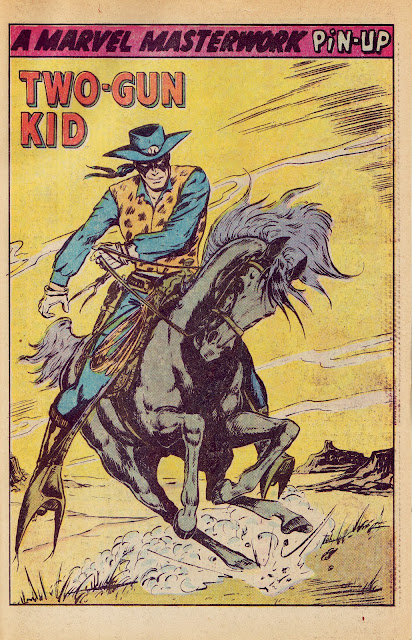 Paty Greer Cockrum worked in Marvel's Bullpen, alongside John Romita, Frank Giacoia, Danny Crespi, Mike Esposito and production head John Verpoorten, handling a myriad of production chores and the occasional pencil, ink or coloring assignment. She contributed a drawing of the Two-Gun Kid which appeared in the final issue. 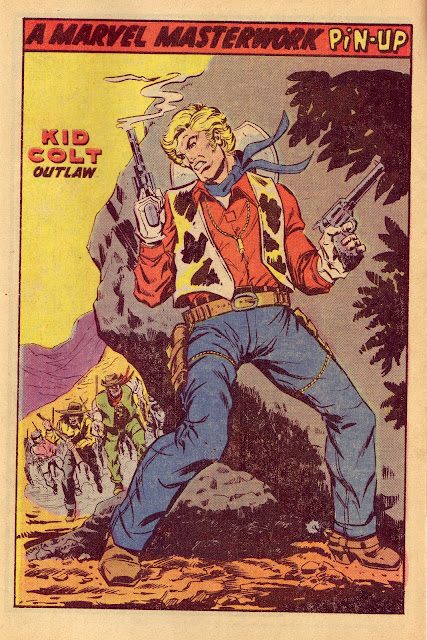 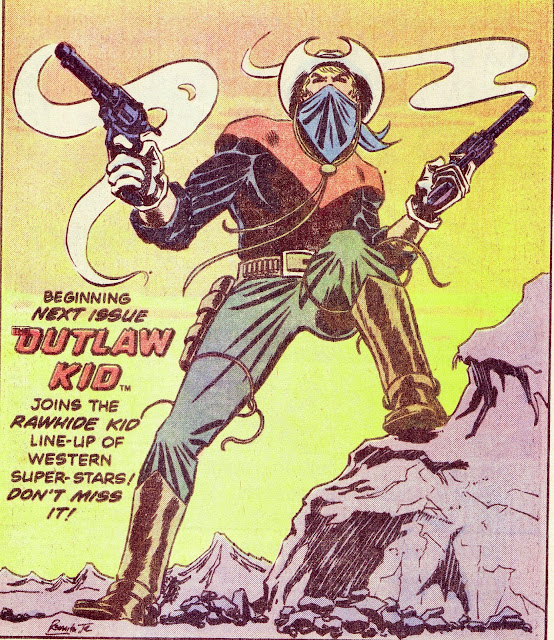 John Romita, Jr. drew these two pin-ups of Kid Colt and The Outlaw Kid early in his career.  Kid Colt is inked by veteran John Tartaglione; Romita Jr. or his father may have inked the Outlaw Kid. Romita Jr. learned his craft from observing his talented father and was inspired by other comic book titans such as Jack Kirby. His strong storytelling techniques have served him well over the years, as seen in Iron-Man, Daredevil (in collaboration with Frank Miller), X-Men, Black Panther, Eternals, Kick-Ass and Spider-Man. 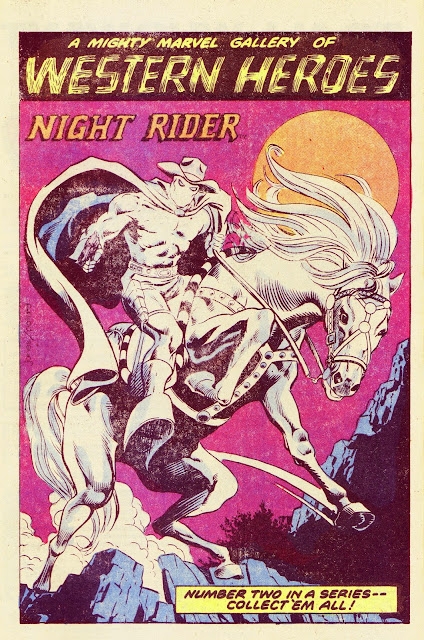 Arvell Jones pencils; Keith Pollard inks. Jones and Pollard have worked together at times, primarily at Marvel and DC/Milestone. Jones is noted for a run on All-Star Squadron with writer Roy Thomas; Pollard has worked on numerous features, including Fantastic Four, Spider-Man, Thor, Green Lantern and a Silver Surfer Graphic Novel with Stan Lee.

A little history on the character pictured above for those of you not in the know. The Ghost Rider originated at Magazine Enterprises in 1949, created by Ray Krank and Dick Ayers. The company folded in the 1950s and when the trademark lapsed Marvel decided to revive the character in late 1966, scripted by Roy Thomas and Gary Friedrich and drawn by co-creator Ayers. Ghost Rider had a short, seven-issue run, but returned as a feature in Western Gunfighters in 1970, which lasted for eight issues. Marvel still felt the name had value, so two years later, at the height of their success with horror-oriented material, a new Ghost Rider was created, this time in a contemporary setting, with a skull face instead of a mask and a motorcycle replacing a horse. This upstart sold well, so when Marvel decided to reprint the western heroes adventures that character was re-named Night Rider. Sometime later yet another name change occurred and Night Rider became Phantom Rider, but we don't need to go into that! (if you're able to make sense of all this, please explain it to me!) 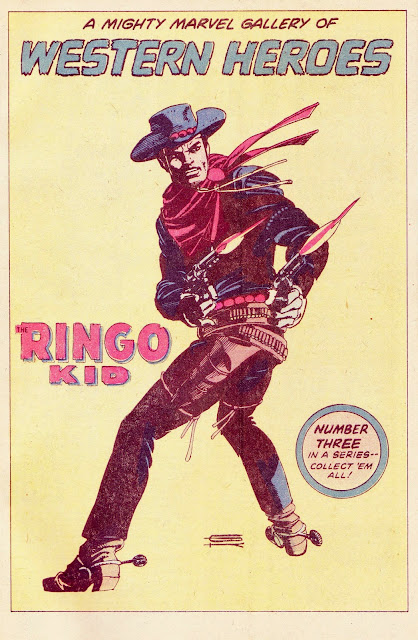 Another pin-up by comic book legend Gil Kane. Kane drew a number of Ringo Kid covers during its run, but this image appears to be new material. 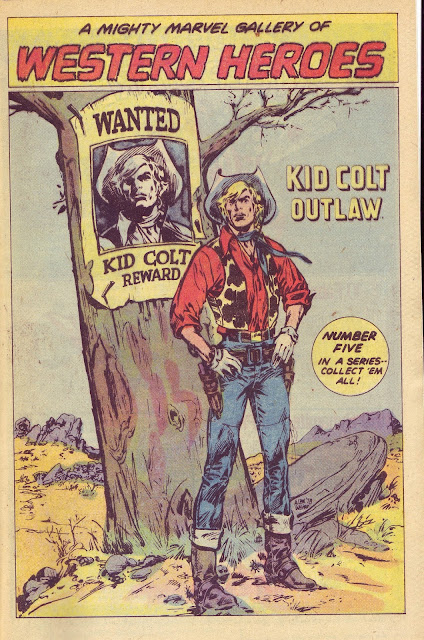 Alan Weiss contributed this stunning illustration of Marvel's long running western star. Weiss was one of the many comic book fans who found a home in the industry. A versatile artist, his work appeared in many genres, including romance, horror, western and superheroes. In addition to Marvel/Epic he has also freelanced for DC, Gold Key, Defiant and Warren. 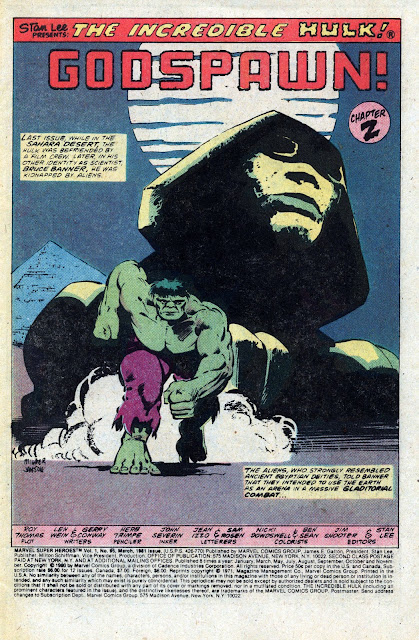 Lurking in the pages of Marvel Super-Heroes, which featured reprints of The Incredible Hulk, is this impressive Frank Miller/Klaus Janson artwork, which I was unaware of until recently. The artistic pair who revitalized Daredevil in the late 1970s (along with writer Roger McKenzie) drew a new splash page, which was required because the story, originally published in The Incredible Hulk # 145 (November 1971), had to be re-formatted and extended over into two issues. This was due to Marvel having raised their price from 15 to 25 cents in 1971, which added up to 15 story pages to every title. This only lasted for a month or two before they reverted to a 20 cent price (and 22 pages). Obviously, when these stories were reprinted years later the editors had to find solutions for presenting the material within the present (much smaller) page count. 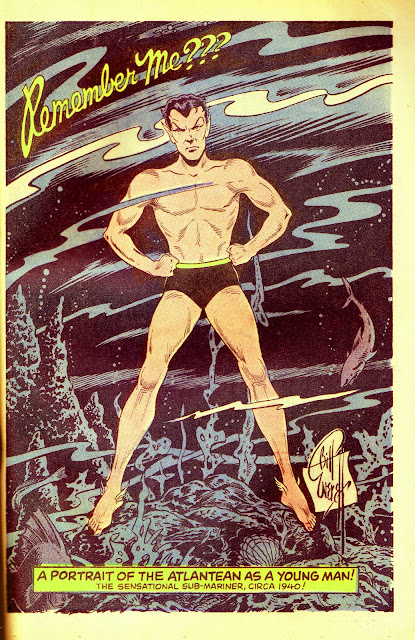 Finally, we close with the unique styling of Bill Everett. The artist created Namor, the Sub-Mariner in 1939 and had a hand in the character on and off for thirty-four years (Everett was drawing Namor when he died in 1973). The other pin-ups featured in the special were images taken from different stories, but this was new art, perhaps originally intended for inclusion in Sub-Mariner's monthly comic. Copy likely by Roy Thomas.

If I discover further reprint treasures I'll be sure to share them within the pages of this blog.

Batmite has showcased an excellent array of pin-ups and special features over on the Marvel Masterworks site. Check it out: