In the 1970's Marvel published a great many reprint comics, and along with the superhero material that appeared in Marvel Tales, Marvel Super-Heroes and Marvel's Greatest Comics, they also reprinted a huge amount of genre material: war, western, horror, monster, jungle, romance and humor. While I've discussed new material that appeared, such as pin-ups or original stats of covers, I've also discovered a few examples of new splash pages that replaced the originals.

When it was decided to reprint the original cover to Strange Tales #93, "When The Thing Runs Amok" some changes were made. Monsters were popular sellers at Marvel in this period, so it made sense to re-publish many pre-hero stories.  The original covers were often used, but artists such as Gil Kane and Jim Starlin were also commissioned to provide new artwork. In the case of the above story there was no original cover to accompany it, since the cover to Strange Tales # 93 broke tradition and skipped using a scene from the lead story, instead focusing on a Lee-Ditko back-up story. 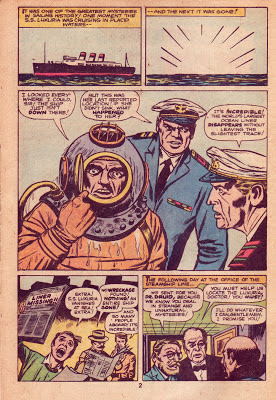 The second page (with art by Jack Kirby and Dick Ayers) was originally the splash. The title and some copy was dropped and two panels were added. The first panel of the ship was taken from page 5; panel 5, with a new panel added. The lettering by Jim Novak approximated Artie Simek's original, and with a little tinkering of word balloons and art alterations in panel three the page was completed.

Roger Stern took great care to produce a different type of reprint title, seeking out interesting material from Marvel's archives and adding a letters page, a rarity in that period. Unfortunately Weird Wonder Tales # 22 was the last issue, and even though, according to Stern's editorial, sales were picking up, monsters and their ilk were waning with the reading public's interests, and the powers that be decided to concentrate on other material. 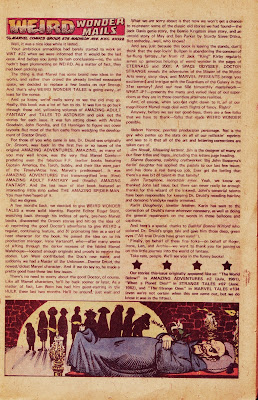 In a touch of serendipity, as I was planning out this blog and discussing it with my good friend Barry Pearl he showed me Tony Isabella's quote from Roger Stern about his input. Tony wrote about Marvel's horror/monster reprints, adding some very interesting information. You can read all about it here:

http://blog.talesofwonder.com/tonys-tips-015/
It's fitting to end this look into reprint minutiae with Jack Kirby's final monster cover for Marvel. Kirby produced two of the four Dr. Druid featured covers (Weird Wonder Tales #'s 19-20), but would soon leave Marvel for the final time. His era of monsters and heroes, both large and small, had come to an end. We would not see its like again.