While the Marvel westerns became increasingly marginalized as the 1960s wore on, early on they were quite popular and while Lee never featured any cross-overs (there were requests from time to time in the letters page to have a time travel story) they were still strongly linked with the Marvel Superhero line.

The Marvel brand name continued to grow in the early to mid-1960s, and the western "Big 3" of Kid Colt Outlaw, Two-Gun Kid and Rawhide Kid were part of that advertising. Full page ads for Fantastic Four or Amazing Spider-Man were scattered throughout the line, along with ads for the latest westerns. Stan Lee was still writing some of the westerns in 1965, but began relinquishing thes duties to Larry Lieber, Al Hartley, Roy Thomas, Denny O'Neil and Steve Skeates. In late 1964 the western's also received their own letters pages. 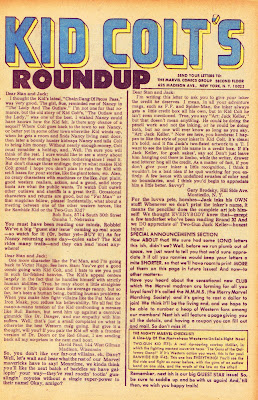 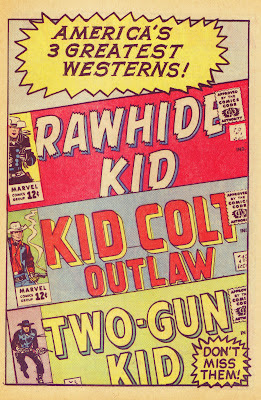 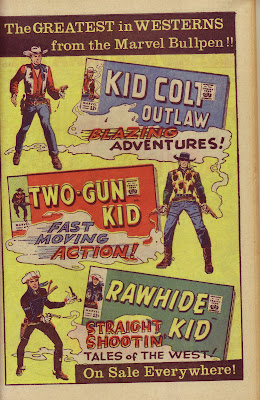 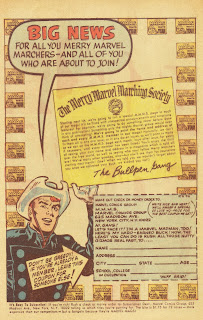 The MMMS house ads were identical to the ones used in the superhero comics, of course substituting the Kid's for the long-underwear types. 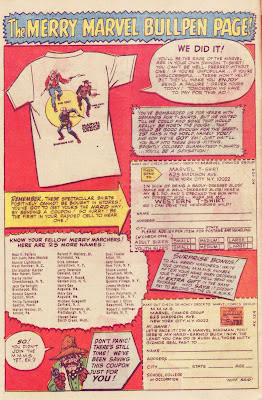 Since not all the western heroes had recurring villains a generic owlhoot was used, drawn by Marie Severin. From Kid Colt Outlaw # 124, Sept 1965 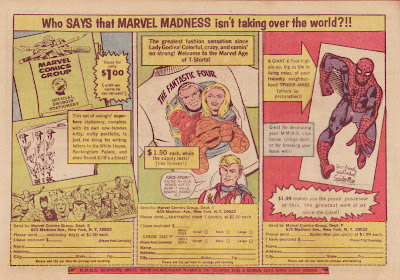 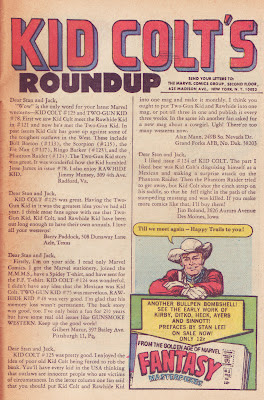 I'm curious if the MMMS was either advertised or mentioned in the Girl's titles (Millie the Model, Modeling with Millie, Patsy Walker, Patsy and Hedy). I have some example of those comics, but none with a reference to the club. It should be noted that the paid ads in these comics were usually different that those appearing in the rest of Marvel's line, although house ads for Millie and company still mentioned the Marvel brand and those titles also included letters pages. Any info would be appreciated and updated right here.

I hope you enjoyed this excursion down the dusty western trail.

We continue with an examination of more early Marvel house ads, including some promoting the MMMS 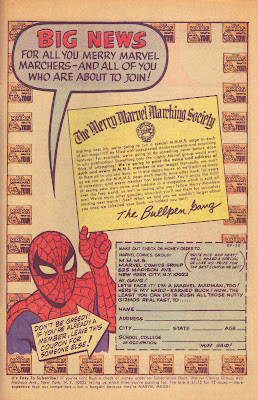 The Merry Marvel Marching Society was a fan club that was hinted at for many months throughout the line, in letters pages and the Special Announcements Section . Stan Lee came up with the idea of a fan club to engender brand loyalty and excitement for the entire line. This was not a new idea, as a little more than a decade earlier, in 1953, EC Comics had the EC Fan-Addict Club.

As you can see, it appears that Lee patterened his club very much after Gaines'. Lee also had an employee who worked for Gaines at the time and likely colored the membership certificate: Marie Severin. Severin contributed to this club as well, drawing some of the material in the stationery kit that would be sent out to members. Marie recalled drawing the E. Pluribis Marvel Seal and likely drew the Hulk on the skratch pads. Marie also did some of the art in the full page ads that appeared in most Marvel comics in 1965 and 1966. 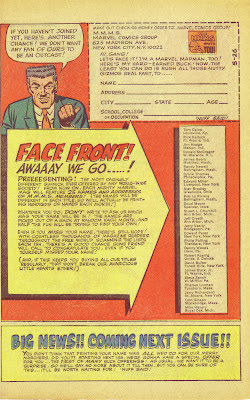 Marie was likely not the only artist who worked on the ads. While some ads employed stats from the regular series artists, others used new art based on artists such as Kirby and Ditko. Carl Hubbell, an artist who had worked at St. John Publishing, spent some time inking at Marvel in this period, mainly on Sgt. Fury and Rawhide Kid, and reportedly assisted on staff for a short time. Jameson's face, although based on a Ditko drawing, looks like it may be drawn by Hubbell. Incidentally, according to Roy Thomas, Hubbell was the artist who redrew a Ditko Spider-Man figure, changing him to the Looter in one panel of Amazing Spider-Man # 36, at the request of Lee. 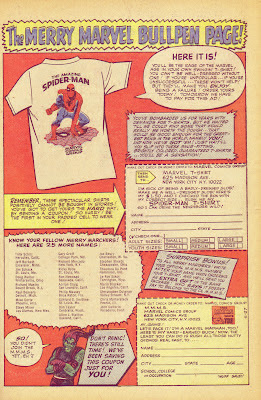 Not only was Lee advertising the MMMS, he was also hawking a line of Tee-shirts featuring the Marvel heroes, with art by Kirby and Ditko (even the western heroes Kid Colt, Rawhide Kid and Two-Gun Kid recieved a tee-shirt, albeit a shared one). I always liked the line: "If you're unpopular..if you're unsuccessful..these won't help!" Every ad also featured the names of 25 different fans. Was YOUR name printed?

The Green Goblin figure, based on a Ditko drawing, looks like Marie's work. 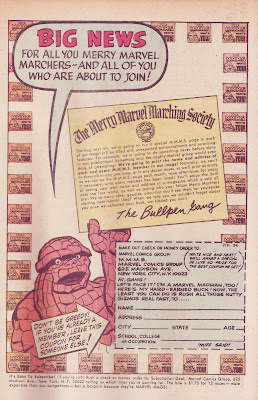 Brodsky may have drawn the Thing figure above. It doesn't look like Marie's work and it's definitely not a Kirby figure. It could be someone else, including Carl Hubbell, but I'm not certain. 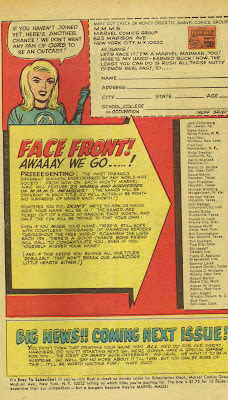 I'm also unsure of the artist who drew Sue Storm. Something about the inking reminds me of Carl Hubbell, although its only a guess. 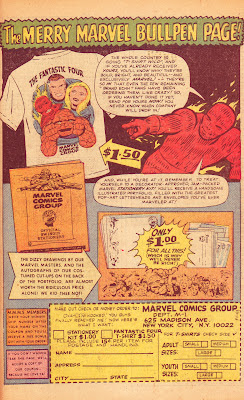 The drawing of the Torch looks like the work of Marie Severin, based on a Kirby drawing. The hand in particular has a very Severin feel. 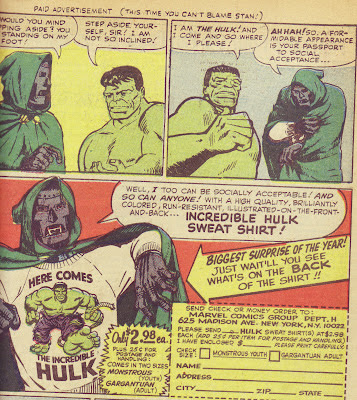 Finally we come to the above ad that Roy Thomas recalled in an interview conducted by Dewey Cassell in his excellent new book, Marie Severin The Mirthful Mistress of Comics. Roy has this to say:

"Well, there's this ad with the Hulk and Dr. Doom that appears in one of the books, and as its printed, it has some drawings laid out by Kirby and I guess, finished up by Mike Esposito, at least as far as the Hulk, and the Doctor Doom figure is by Marie. But Marie had just been playing around and did this cartoon, even wrote it, basically, and most of her writing stayed, with a little editing from Stan in the printed ad.....and Stan, finally, at the last minute, decided he wanted the Hulk to look a little more like he did in the comic, so he changed him and left Doctor Doom, as I said. But I think it was that page. There may have been something else, too, but it was a page like that Martin Goodma saw that  made him tell Stan "She should be drawing some of the comics"... "

Roy was correct about the ad. The Hulk figure was a stat from a recent Tales to Astonish story. It was laid out by Kirby, although Mike Espoito inked it over Bob Powell pencils. However, Marie's original version DID make it in print! 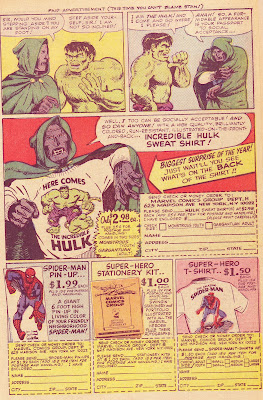 Somehow or other Marie's original version WAS published, in Amazing Spider-Man # 34. Checking through my collection, which includes all the hero titles, as well as Sgt. Fury (some titles did not include the ad), it appears that all the other ads used the Hulk stat. Apparently Lee or production man Sol Brodsky overlooked that one book and included Marie's version. Whatever the case, Marie did a fine and funny job on that ad, and Martin Goodman took note, leading to some outstanding work by her on features such as Sub-Mariner, Kull, Not Brand Echh, and, yes, the Hulk!

Marie is a tremendous talent and deserves a post all her own, but I found this little surprise worth noting as I perused Marvel's house ads.