The memory is distinct yet indistinct, in a way memories often are. I was four, maybe five years old, in the apartment of a relative or friend of the family that my parents were visiting. The Sunday News comics section was laying on a table and caught my attention; the stylized drawings glowed colorfully and hypnotically. I don't know why that moment holds sway over so many others. It certainly wasn't my first encounter with Dick Tracy, since the New York Daily News was a staple in my household - my older brother John would often be sent out by my father to buy the paper, and if it was sold out at Angelo's (our closest candy store) he would have to venture from store to store until he found a copy.

I was always fascinated by comics, both books and strips. The images drew me into their world. I poured through the funnies every Sunday, paying particular attention to Little Orphan Annie and Dondi, but Dick Tracy, who held court on the front page each week, was especially captivating. Tracy was probably one of the first comic strips I WANTED to read (and one of the first drawings I tried to copy).

That Sunday page, vaguely remembered through the fog of long gone days, is (almost certainly) one that took place on the moon, a period of time in Chester Gould's strip that is reviled by many fans, but, as Max Allan Collins notes in his essay in The Complete Dick Tracy, Volume 21:

"And for every grown-up kid who'd been aboard since the '30s or '40s and bitched about this change of direction, there was an actual kid for whom the space-age Tracy was the only one he or she knew...and many of them loved it."

I was one of those kids. 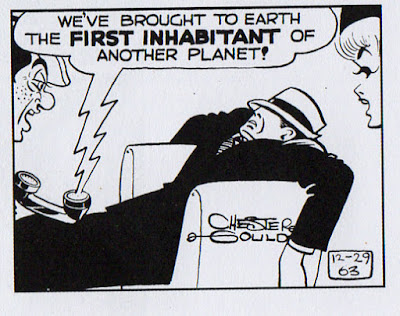 Gould's use of body language is skillfully employed in this panel from December 29, 1963. Tracy's slouched figure likely echoes the reaction of a section of long time fans when reading this panel!

In actuality the 'Moon Phase" made perfect sense. The space race between Russia and the US was in the headlines (when are they NOT!); the early 1960s included accounts of spacecrafts occupied by chimpanzees, the first astronaut in space (Alan Sheppard, May 5, 1961) and on February 20, 1962, John Glenn orbited the earth. President John F. Kennedy vowed that by the end of the decade the US would land a man on the moon. Gould, always on top of current events and ahead of the latest technology had to top that! 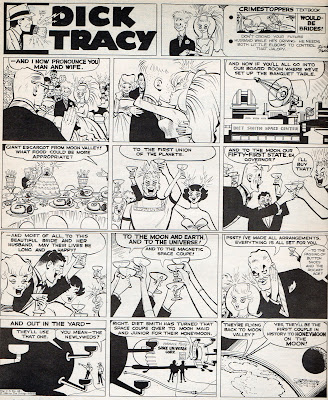 Was THIS the Sunday page that captured my attention way back on August 6, 1964? I can't say for sure but it's entirely possible.

The Dick Tracy Show originally ran from 1961-62 and was syndicated for many years afterward.

By 1964 Chester Gould's famous detective had been in the papers for thirty three years. The wildly popular strip became a merchandising phenomenon early on, which translated into a plethora of tie-ins, including  toys, games and dolls. Dick Tracy also made the jump to radio, two movie serials and a TV show. In 1961 a cartoon was created, aimed specifically for the kiddie set. Produced by UPA, it opened with Tracy dispatching an array of comedic crime-fighters to confront toned-down versions of Tracy's rogues gallery. Distinguished character actor Everett Sloane supplied Tracy's voice; his credits include working alongside Orson Wells in the famous Mercury Theater radio dramas (an aside for the trivia-minded and comic fans, Sloan had a recurring part as the cab driver Shreve on The Shadow radio show), a part in Citizen Kane and countless movie and TV roles, including an outstanding performance in Rod Serling's teleplay Patterns and The Twilight Zone. Dick Tracy was hosted in the New York area by "Officer Joe" Bolton on WPIX-TV, Channel 11. 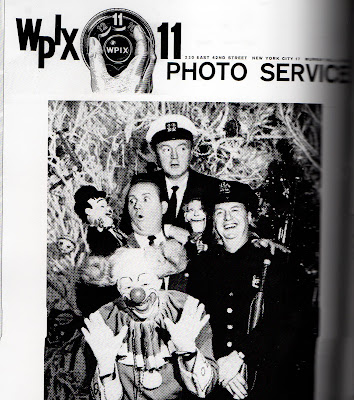 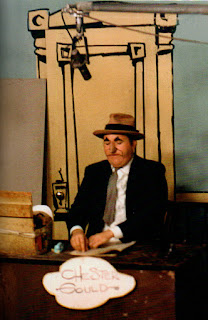 When a strike shut down most New York newspapers in late 1962, including The Daily News, children's host Chuck McCann came up with the idea of reading the most popular strips (Dick Tracy, Little Orphan Annie, Dondi, Terry and the Pirates) on his "Let's Have Fun" Sunday program, keeping viewers up to date on their adventures. McCann was inspired by Mayor Fiorello La Guardia, who read the funnies on radio station WNYC in 1945 during a strike by newspaper delivery drivers, but since television is a visual medium Chuck went one step further and dressed as the characters! 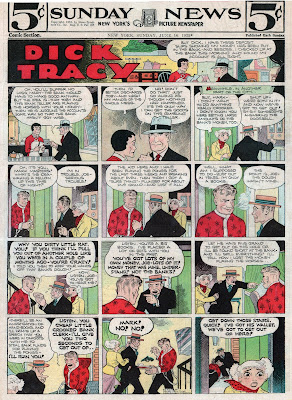 Dick Tracy has a long history, beginning on October 1, 1931. Chester Gould's strip tapped into the public's fascination with the underworld and wiseguys like Al Capone, who were headlining stories in newspapers throughout the country. The strength of the feature was predicated on several factors, including a heroic lead character, attention to police procedures (Gould utilized a consultant from the force in order to maintain a degree of authenticity) and episodic adventures. It was these very elements that enabled Gould and the daily saga to reach a wide-ranging audience. 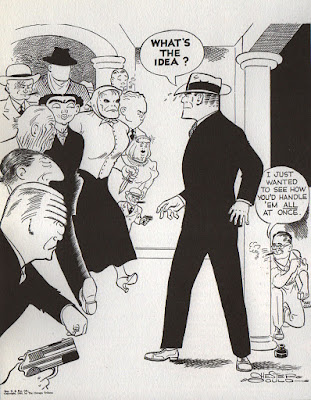 Gould's playful illustration of Tracy being ambushed by his many foes was drawn for Life magazine, appearing in the August 14, 1944 issue. 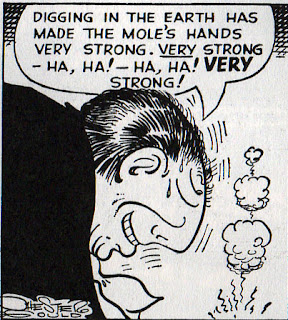 The Mole was another gruesome Tracy villain. Panel from November 21, 1941.

Gould's rogues gallery included grotesque criminals such as The Brow, Flattop, BB Eyes, Mumbles and Pruneface, to name just a few. For decades Gould came up with fresh antagonists to oppose his creation, rarely taking the easy way out (he killed off many of his famous foes), an amazing accomplishment in itself. Both Dick Tracy and the villains Gould created inspired a horde of similar comic strips, including Radio Patrol, Secret Agent X-9, Red Barry, Kerry Drake. The comic book field also took notice. From its first issue in 1937 one of Detective Comics ongoing features was Slam Bradley, created by Jerry Siegel and Joe Shuster, the duo that would bring Superman to life; two years later Bill Finger and Bob Kane produced a new character for Detective: Batman. They, along with others such as Jerry Robinson, followed Gould's template with weird protagonists such as the Penguin and The Joker.

A daily strip from November 20, 1950. Somber scenes of cast members praying for the life of a loved one occurred throughout Gould's run. The cartoonist wove a rich tapestry of comedy, tragedy and melodrama in many of his best story lines. 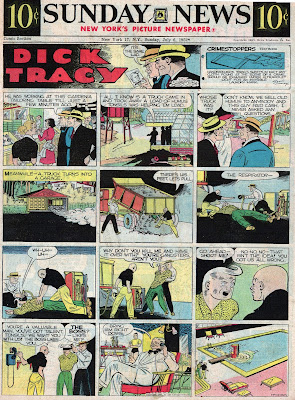 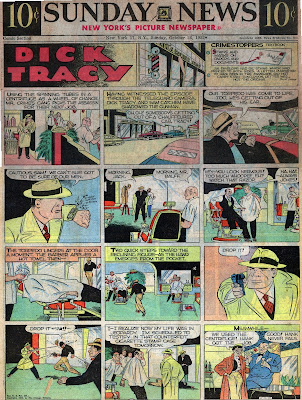 October 26, 1952.
Examples of two 1950's Dick Tracy Sunday pages. Many fans contend that Gould was at his  creative zenith in this period. Exceptional pacing, stylized drawing, bizarre hoodlums and gritty gun-play are some of the reasons to justify their claims. 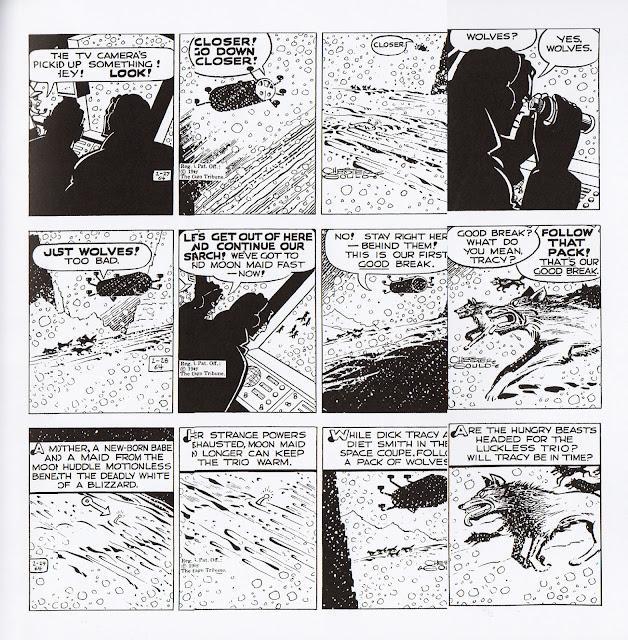 The uncontrollable forces of nature often threatened Dick Tracy, his friends and his foes; sometimes fatally. Gould played with the elements like a virtuoso: scenes of raging fires, torrential storms, horrendous floods and, most spectacularly, the power and beauty of snow. No one depicted these scenes as vividly as Gould. 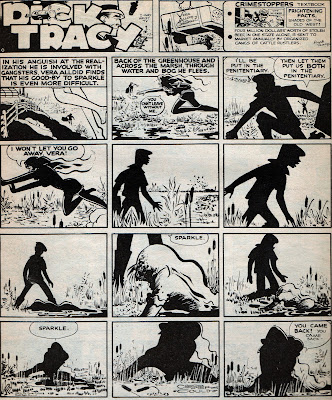 Even after 38 years on the job Gould could still up the ante and infuse his pages with bold, shadowy, almost surreal imagery. June 15, 1969.

Chester Gould retired from his creation in 1977 after producing Dick Tracy seven days a week for 45 years. His distinctive, immediately recognizable artwork transfixed me much like Steve Ditko's did in comic books. Not surprising in retrospect, since both creators are unique, quirky and true craftsman. There were certainly times Gould faltered; producing a weak story or villain and forced humor, but his RBIs* are in the stratosphere. Chester Gould invested his characters with warmth, humor and personality. His stories dealt with technology, humanity, brutality, sincerity and absurdity. His work lives on in sequential hardcover reprint collections for fans to pore over and future generations to enjoy. All these years later I still find his work endlessly fascinating.

To learn more about Chester Gould and his creations go to the Dick Tracy Museum: http://www.dicktracymuseum.com/ 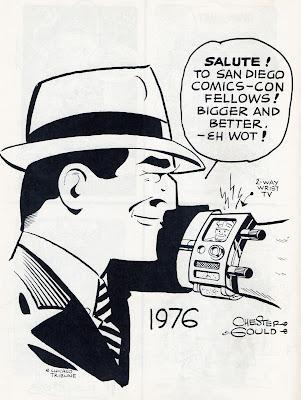 * Runs Batted In, for those who don't know Baseball terminology.