For those readers who don't get enough of my musings here (all three of you) I would like to direct you to one of my favorite Bloggers, a gentleman whose posts are often fascinating, illuminating and have a touch of melancholy for a time long gone.

"Kid" Robson was kind enough to allow me to write a Guest Blog, so I thought I'd reminisce about my discovery and interest in Marvel's UK line. I hope you'll pop over there and not only read my post, but wander around the many corners of the comics world that Kid writes about with great passion and enthusiasm.

My last post on Charlton garnered a great deal of response, which surprised and pleased me. This time out I'll delve into the more neglected genres and show some examples of a few other Charlton alumni.

Jack Keller worked in the business for many years, early on as background artist for Will Eisner on his Spirit comic strip. Keller's art was spotlighted in Quality comics and became a prolific contributor to Stan Lee at Timely-Atlas on crime and horror stories, but is most recognized for his long and successful run on Kid Colt, Outlaw. Never a flashy artist, Keller had a straightforward style and could tell a story well. His rendition of Kid Colt was not musclebound but more of an average looking guy that readers could relate to. For Charlton he illustrated many western and war stories, but his biggest contribution was on their line of hot rod and car titles, many of which he both wrote and drew, often assisted by his son Gary as letterer. Keller was knowledgeable and enthusiastic over the material (he built model cars in his spare time). In later years he worked for a car dealership. Keller died in 2003. 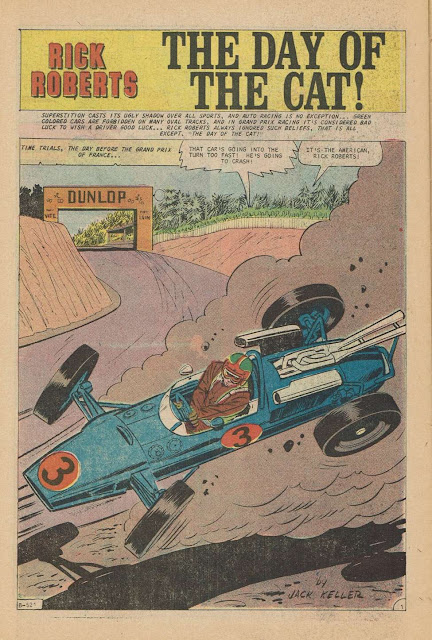 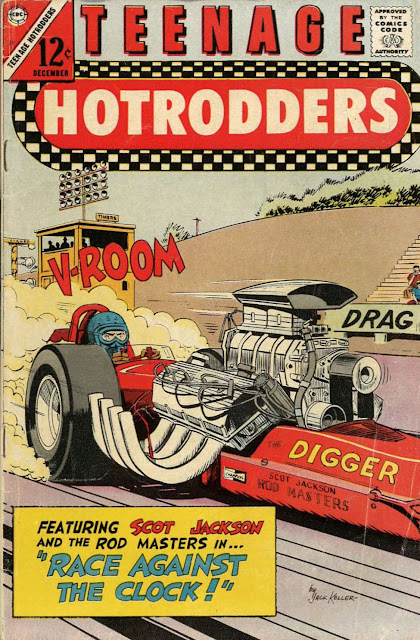 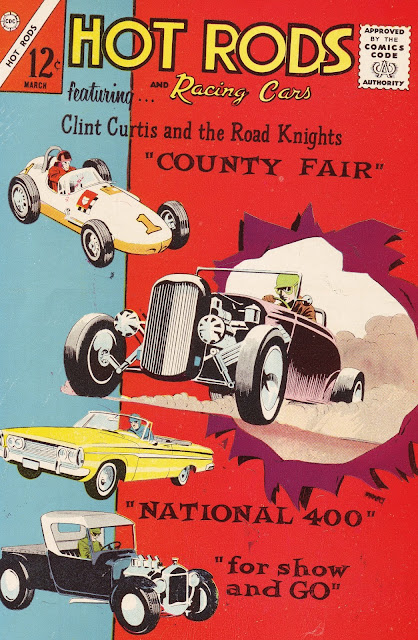 Along with Jack Keller, Dick Giordano provided many covers for Charlton's popular line-up of Hot Rod comics, although this may possibly be penciled by Pat Masulli. Hot Rods and Racing Cars # 68, March 1964.  This publication ran a healthy 120 issues, from 1951-1973. 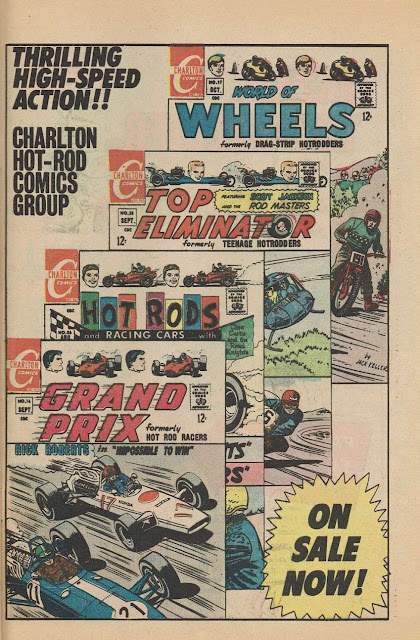 A mid-1960s house ad showcasing Charlton's line of car-related titles. This genre sold well with the general public for over two decades. 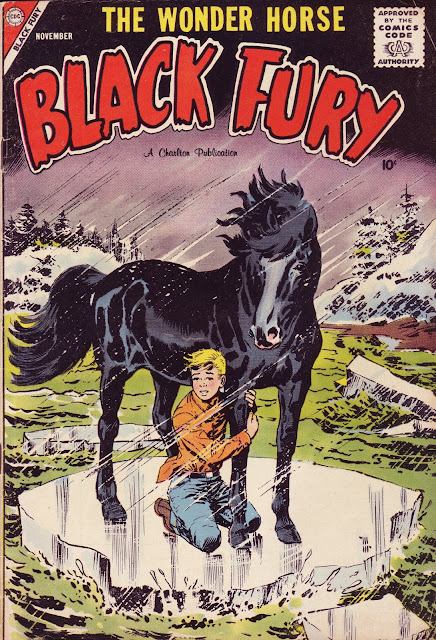 Charlton produced all types of comics. This one starring a horse is interesting for a number of reasons. I doubt it was coincidental that NBC TV aired a show called Fury from 1955-1960, the story of "A horse and the boy who loved him." Black Fury also debuted in 1955, although there was no connection to the TV show. I guess no one at the network was aware of Charlton's comic. Cover by Maurice Whitman, from Black Fury # 16, Nov 1958 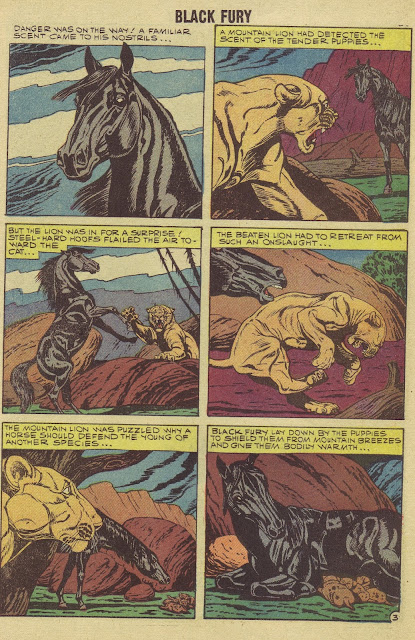 "The Guardian", page 3, Ernie Hart art and possible script, from Black Fury # 18, April 1959
A number of talented artists worked on Black Fury, including Ernie Hart, who was a writer, artist and editor for Timely Comics working in the animation division. Hart may be known to some as "H.E. Huntley", a pseudonym he used while scripting early Marvel "Human Torch" and "Ant-Man" stories. 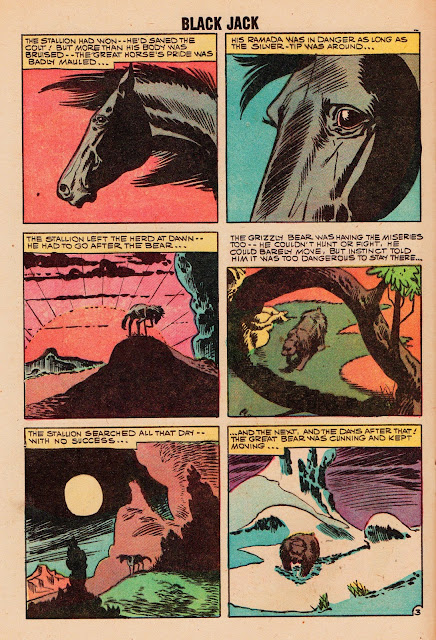 While Steve Ditko is best known for his horror/mystery/science fiction stories at Charlton, he also dabbled in the "horse" category. This page is one of the best examples of Ditko's panel to panel choreography and his ability to ring emotion out of an animal, as illustrated in panel two. "The Silver-Tip Outlaw" included no humans in the story and was told in captions. Script likely by Joe Gill; lettering by Jon D'Agostino.  Rocky Lane's Black Jack # 27, May 1959. 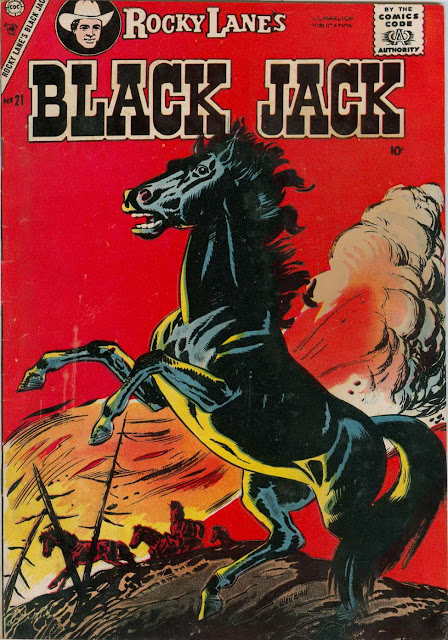 Rocky Lane's Black Jack # 21, January 1958, Maurice Whitman art. Another equine-centered comic was Black Fury, the horse of popular cowboy star Rocky Lane. In a few years Lane would trade places with his companion and become the anonymous VOICE of a horse on the 1961-66 comedy series Mr. Ed! (who said this blog has to only be about COMICS minutiae!) 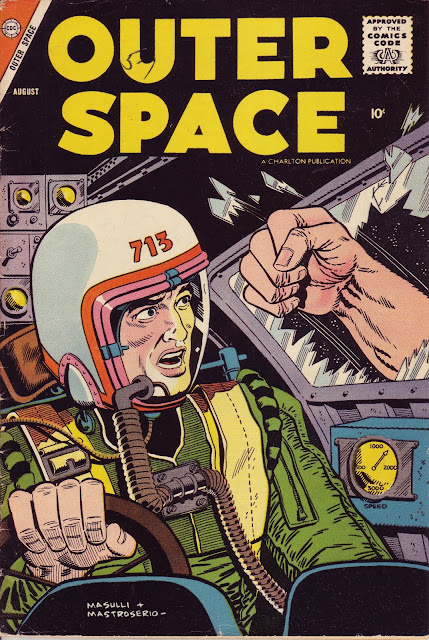 Pat Masulli was the Executive Editor of Charlton from 1955-1966, taking over from Al Fago. Masulli began at Charlton as a colorist, but also worked as an artist for a number of companies. Even when he was Executive Editor Masulli pencilled covers for Charlton, it's interesting to note that almost all the Charlton editors, including Al Fago (who drew Atomic Mouse), Pat Masulli, Sal Gentile, Dick Giordano and George Wildman, were also artists. Here Masulli is inked by Rocco Mastroserio. Outer Space # 18, August 1958. 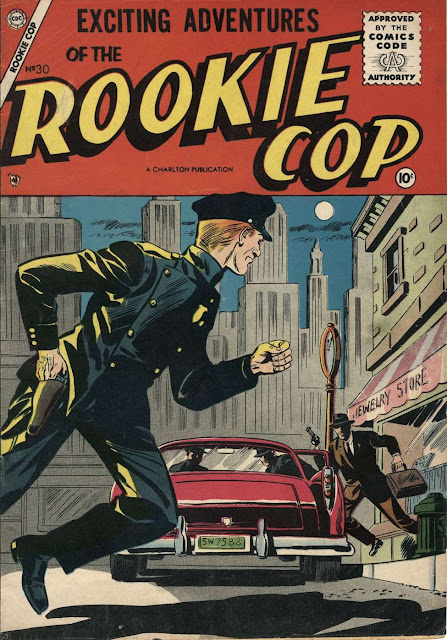 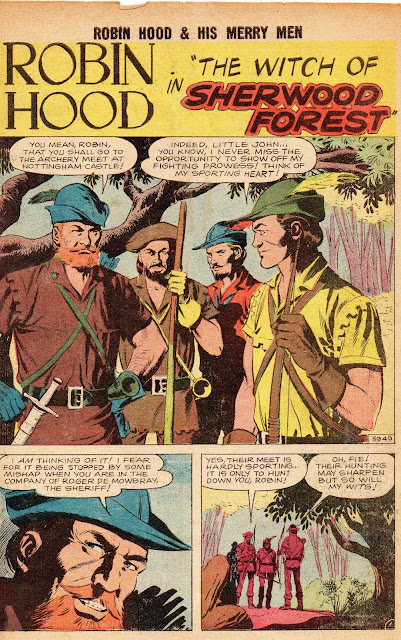 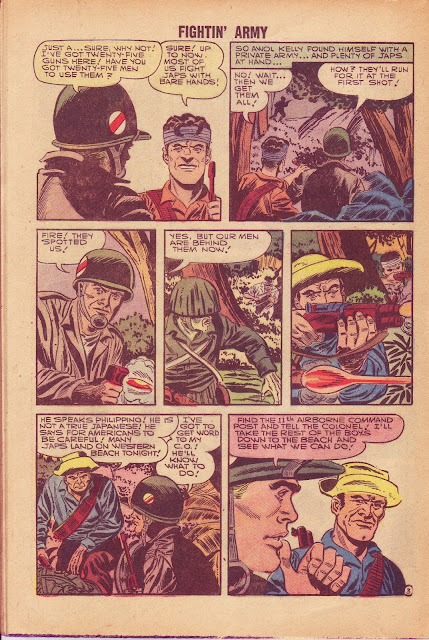 Although Bill Molno worked for various companies he was most prolific at  Charlton Press, where his quirky but distinctive art appeared throughout the line. You can learn (and view) much more of Molno's work on Lee Hartsfeld's informative blog: http://leescomicrack.blogspot.com/ 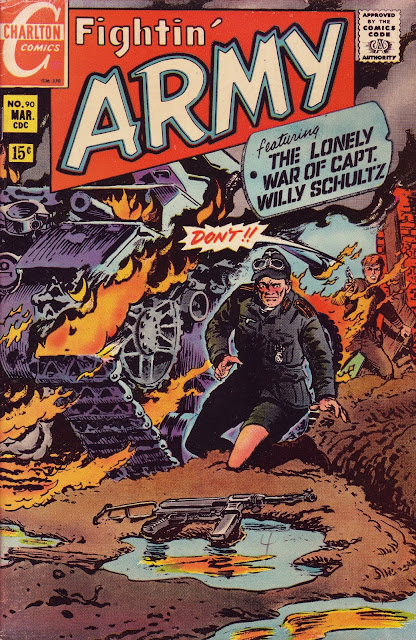 Sam Glanzman started out in comics in 1939 and worked for a variety of publishers, including Centaur and Harvey. In the 1950s and 1960s he worked primarily for Dell and Charlton, pencilling movie adaptations, war stories and strips such as Kona. At Charlton he drew an unauthorized and short-lived Tarzan series and worked on Hercules. Glanzman was most closely associated with war stories and later wrote and drew a series of autobiographical stories for DC, "U.S.S. Stevens". With writer Willi Franz he drew the feature "The Lonely War of Captain Willy Schultz" in Fightin' Army for a number of years. 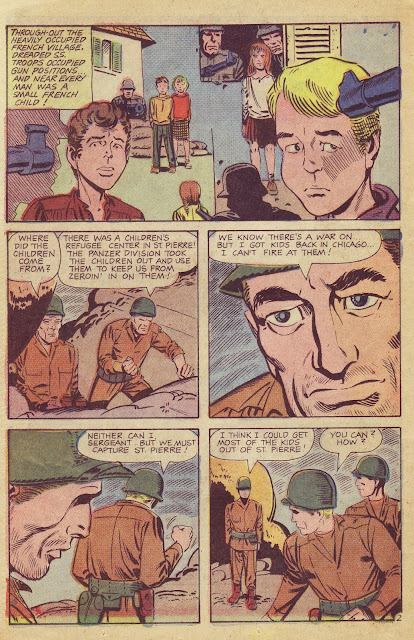 Although Steve Ditko was often seen in Charlton's many ghost comics in the 1950s-1970s, he also worked in other genres from time to time. Here he lends his considerable talents to a war story. Page 2 of "Pied Piper of St. Pierre", possible Joe Gill script, from Fightin' Army # 89, Jan 1970. 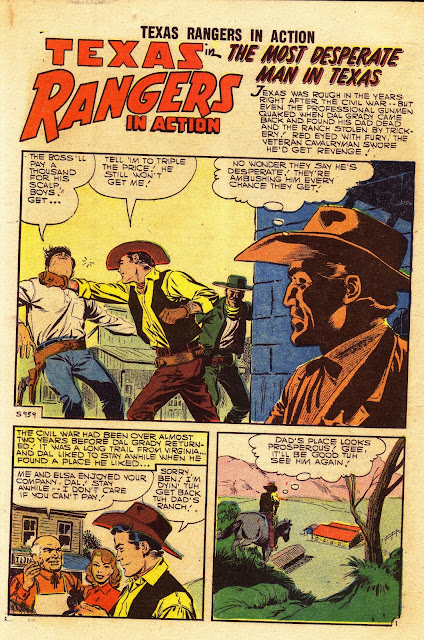 Dick Giordano drew everything at Charlton, including crime stories, romance, hot rods and westerns, and just about all the work was produced with solid craftsmanship. "The Most Desperate Man in Texas", Texas Rangers in Action # 8, July 1957 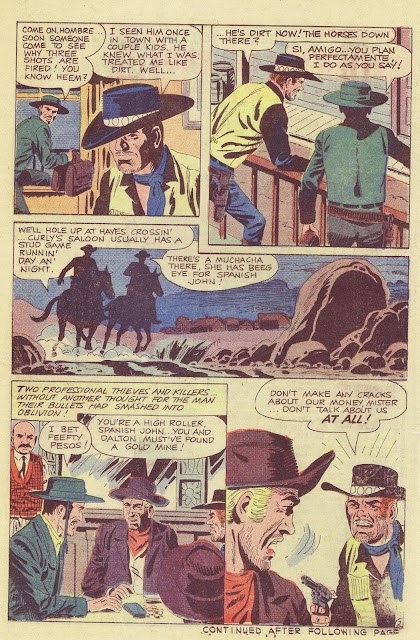 Charles Nicholas and Vince Alascia on pencils and inks respectively teamed-up on countless Charlton stories, appearing in every genre with the possible exception of funny animals or cartoon characters (and I could be wrong there!). While their art was competent it often lacked dynamism, but they rose to the occasion from time to time and I've gained respect for their efforts. "The Professionals", Outlaws of the West # 81, May 1970. 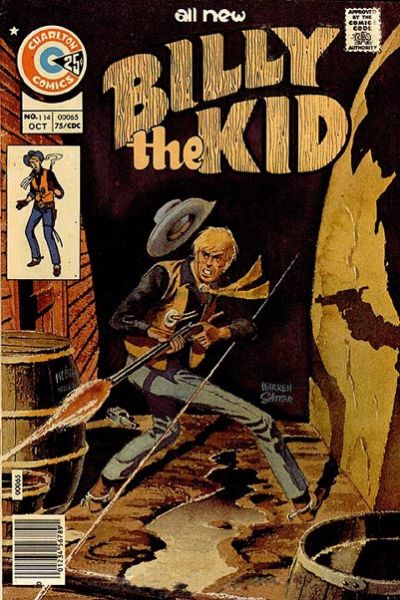 Billy the Kid # 114, September 1975
Warren Sattler illustrated many war, western and ghost stories for Charlton in the 1970s and worked on charcters such as Billy the Kid and Yang. Sattler had an attractive style, as can be seen by the above painted cover. 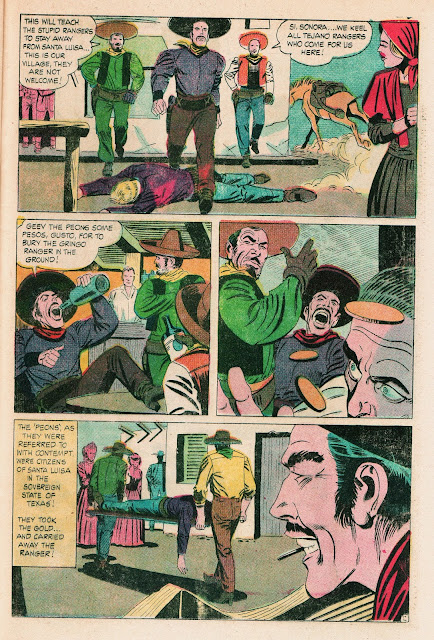 A rare example of Steve Ditko on a western. Ditko's use of  body language and facial expressions is evident on this page, including an impressive silent panel. "Enemy Ground", Texas Rangers in Action # 77, April 1970. 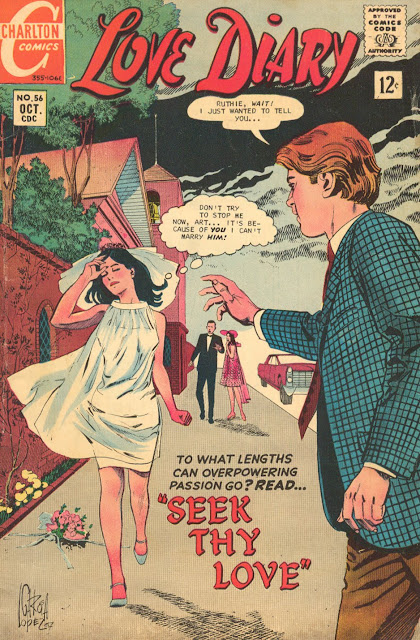 Charlton had a huge line of romance comics and included many fine artists, including a young Jose Luis Garcia Lopez, who later went on to produce exceptional work for DC comics.  Cover from Love Diary #56, October 1968. Scan courtesy of Jacque Nodell who has educated me greatly on Romance comics through her blog Sequential Crush. You can read her thoughts on the cover story here: 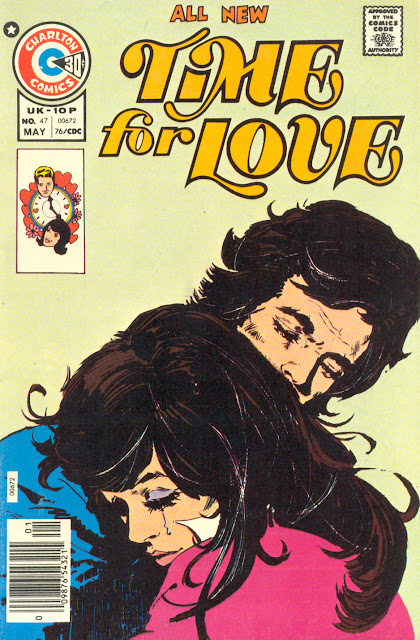 Jorge Badia Romero's cover for Time for Love #47, May 1976 from the collection of Jacque Nodell, who has displayed much wonderful art by the neglected Spanish artists on her site. 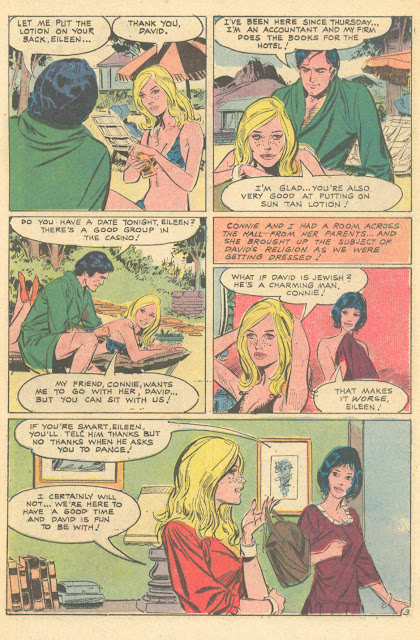 Charlton comics ran a continuing story of David and Eileen, a couple in an interfaith marriage, an unusual idea that was probably not seen anywhere else in comics. "Heart-Ache Ahead" from Just Married #93, March 1973. Artwork by A. Martinez and J. Zuniga. Jacque has written a little about the series here:

Dick Giordano noted his involvement as editor in getting the talented Spanish artists for Charlton in an interview in Whizzard # 18, 1981:

"I made contact with a studio in South America and they were able to produce artwork at a fraction of the normal rate. Having discovered this, I went down to the publisher at the time and said, "rather than the company establishing rates I would like to dispense the money as I see fit as long as we remain within the established budget." I managed to save money a number of ways, partly by using the South American artists. Also, if you look closely you'll see that some of the covers are photostats of the inside art. I did that so I could pay Steve Ditko, Denny O'Neil and others a little more." 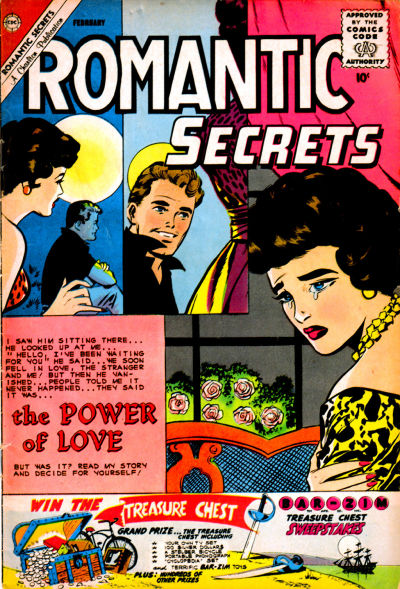 Vince Colletta (aided by a studio of assistants) inked a prolific amount of work for Charlton, particularly on their many Romance comics. From 1959-1963 Joe Sinnott penciled many of Colletta's stories. The cover above consists of  scenes taken from an interior story, a technique employed by Charlton to save money. Romantic Secrets # 31, Feb 1961. Image from the Grand Comic Book Database. 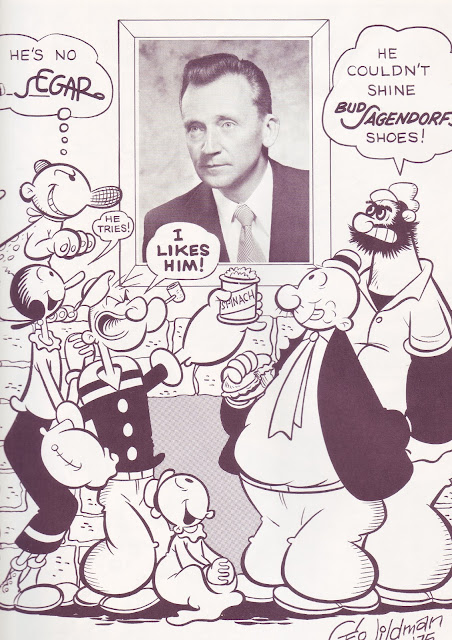 George Wildman took over the editorial post from Sal Gentile in 1971, with Nick Cuti assisting. Wildman also drew the Popeye comic book, which was written by Joe Gill (one of his favorite assignments). Wildman provided information for the fan press and was instrumental in notching up the quality of the Charlton line. This drawing appeared in The Charlton Bullseye # 2 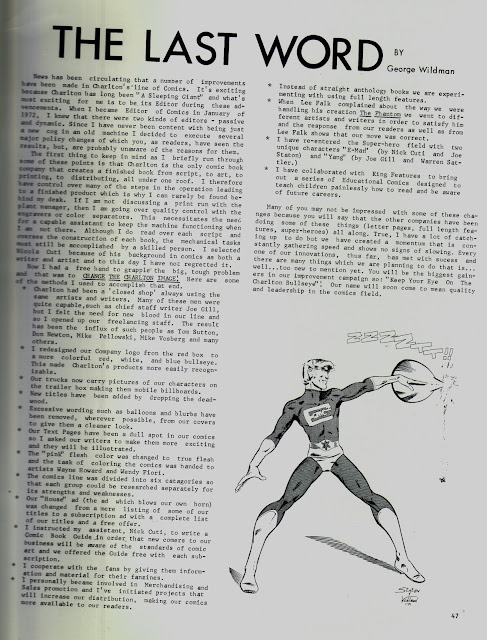 Wildman explained his editorial policies,  accomplishments and goals in this article from The Charlton Portfolio, 1974 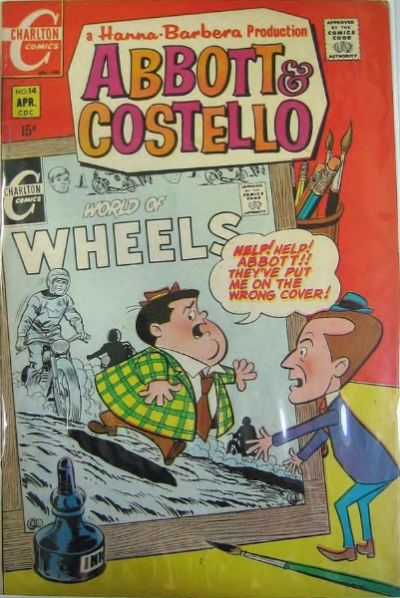 The Abbott and Costello comic book (which tied-in with a Hanna-Barbera cartoon) starred the famous comedy duo and included quite a few witty covers, such as the one pictured above, referencing one of Charlton's Hot-Rod comics. The interior story was likely scripted by Joe Gill, with art likely by the team of Bill Fraccio and Tony Tallarico. Early issues included witty scripts by Steve Skeates and art by Henry Scarpelli. Gill enjoyed working on humor, as did Steve Skeates,  Abbott and Costello # 14, April 1970. Image from the GCD. Information on possible Tallarico art per Mark Evanier. 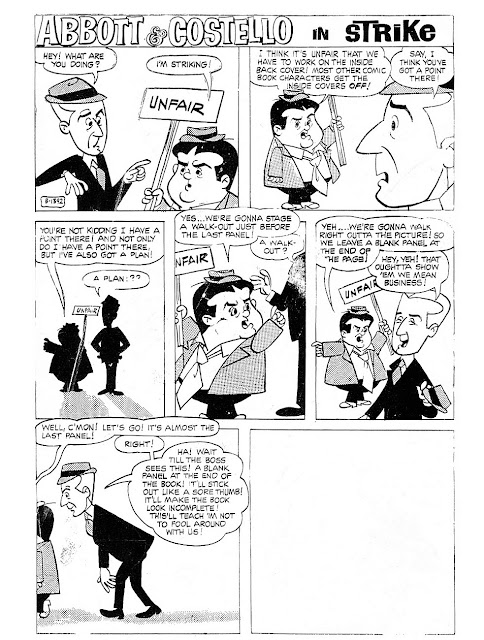 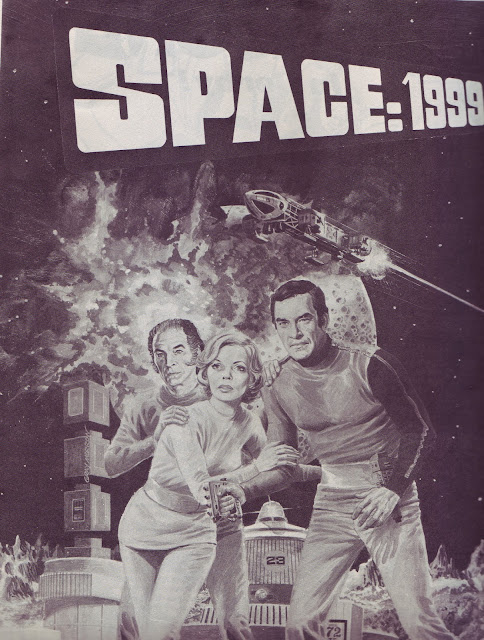 Talented artist Gray Morrow did some work for Charlton on their magazine line in the 1970s, as did Neal Adams, mainly on TV related fare such as the Six Million Dollar Man, Emergency and Space:1999. Cover from a stat of the first (magazine) issue, Space 1999 # 1, Nov 1975, as published in The Charlton Bullseye # 3. 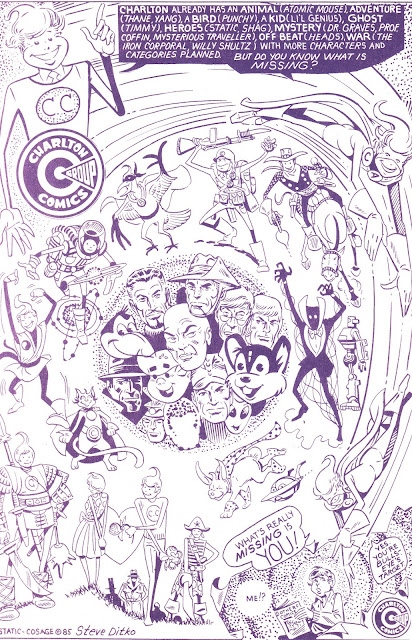 In 1985 Charlton made one final attempt at a revival. This ad by Steve Ditko gave him an opportunity to draw characters he had never worked on before, including Yang, The Iron Corporal, Punchy the crow and Lil' Genius! Ad from Amazing Heroes # 82, 1985. 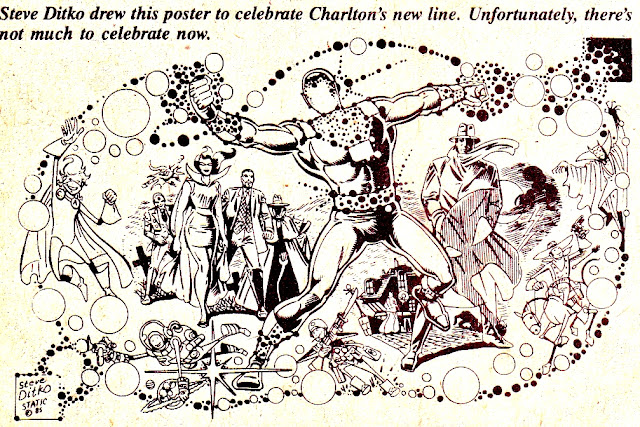 As noted in a news item that accompanied this drawing in The Comics Journal # 103, November 1985, Ditko's poster celebrating Charlton comics included some of the popular hosts such as Dr. Graves, The Mysterious Traveler and Winnie the Witch as well as his own creation, Static, of which he retained copyright. Unfortunately sales on the revived line were dismal and Charlton closed its doors for the final time. For 40 years Charlton had a diverse line of comics, with many hard working artists, writers and editors on their staff. I doubt we'll ever see its type again.

With thanks to Robin Snyder, Jacque Nodell and Mark Evanier.