In my last post I presented an article on the superhero revival of the 1960s that appeared in an early fanzine, Hero. In this installment I follow up with another piece from Hero # 1; a discussion on DC’s popular Justice League of America. The team concept was not only a proven financial success, but garnered robust support from a majority of fans, including a portion that had collected All Star Comics in the 1940s and early 50s, a comic book that starred the original “Justice Society of America".

Justice League of America # 16 (December 1962), published a few months before the article in Hero # 1 appeared, is an example of the industry's growing awareness of fandom. A character in the story, Jerry Thomas, is a nod to both Jerry Bails and Roy Thomas, two well-known fans whose missives were published in editor Julie Schwartz's letter columns. Murphy Anderson art; Ira Schnapp letters. Image from the Grand Comic Book Database: http://www.comics.org/issue/17301/


Rick Weingroff, a creative fan who wrote a series of intelligent articles on comics (and several years later published his own superior fanzine, Slam Bang) came up with a novel idea: ask some well-known and knowledgeable fans their thoughts on the JLA and present it in a format where one can imagine them sitting around a table chatting. Weingroff was the “chairman” who posed questions to his virtual panel and the effect worked quite well. The "Point of View" column was popular and continued in later issues (which will be covered in upcoming posts).

The “round-table panel” consisted of three fans; Rick West, Paul Gambacinni , whose articles appeared in the long-running Rocket’s Blast Comic-Collector (Gambacinni became a future published author and radio broadcaster for the BBC) and Roy Thomas, co-editor of Alter-Ego (first with Jerry Bails, followed by Ron Foss. Thomas soon graduated to full editor). In less than three years Thomas joined the ranks of comic book professionals, taking a position beside Stan Lee as his editorial assistant and scripting team titles that included Sgt. Fury, X-Men, and a group inspired by the Justice League: The Avengers. For the next fifteen years Thomas had a turn writing practically every Marvel superhero title, brought properties such as Conan the Barbarian to the medium and initiated a truck-load of new series ideas. When Thomas moved to DC in 1980 he not only got a chance to write a few issues of Justice League, but launched a new comic featuring his beloved “Justice Society” entitled All Star Squadron. While continuing to work on special projects for various companies Thomas went full circle in the late 1990s, returning to fanzines as editor of a revived Alter Ego, of which I am proud to be a contributor. 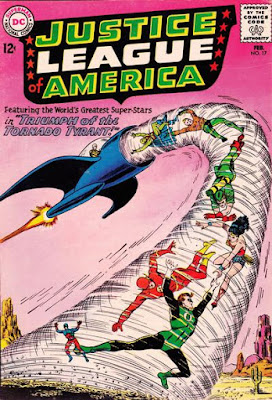 Justice League of America # 17, cover-dated February, 1963, would have been on newsstands when fan discussion of the group appeared in Hero # 1. Murphy Anderson art; Ira Schnapp letters. Image from the Grand Comic Book Database: http://www.comics.org/issue/17496/cover/4/


Reproduced below: a time capsule into the world of fandom from Hero # 1, December 1962. 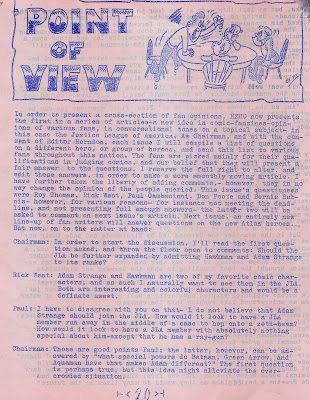 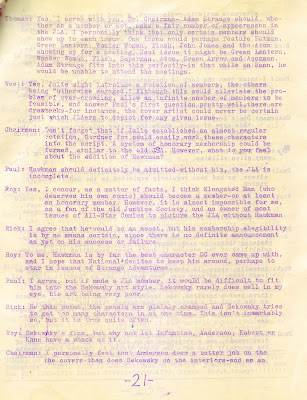 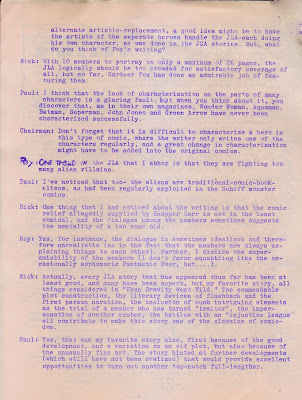 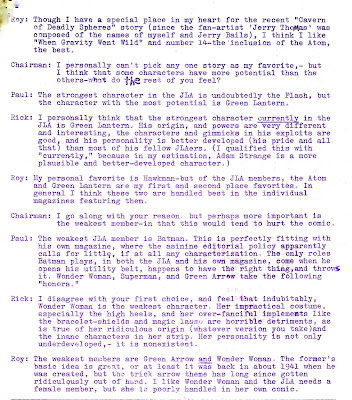 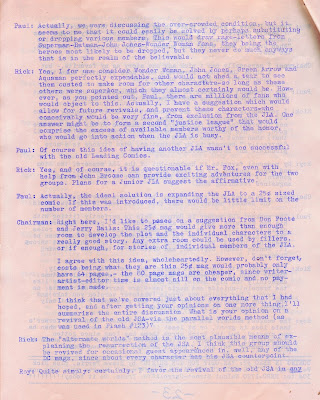 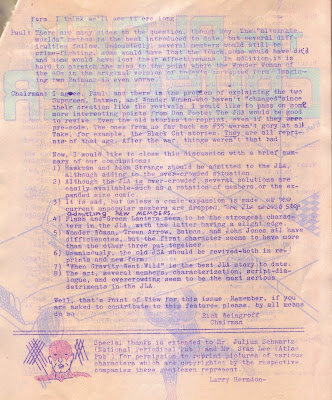 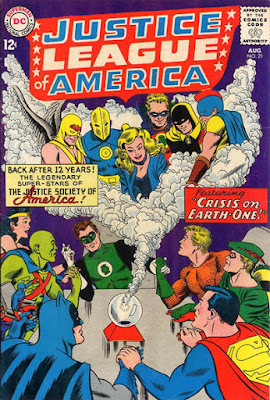 Six months after Roy Thomas prophetically intoned: "I favor the revival of the JSA in any form. I think we'll see it ere long." His and other fans' dreams came to fruition in the pages of Justice League of America # 21. Alternate worlds were familiar trappings to readers of science-fiction, including DC editor Julie Schwartz, who as a teenager co-produced Time Traveler, an amateur publication that was a precursor to comic related fanzines.

A brief but interesting aside: In 1961 Schwartz informed Jerry Bails that the newsletter he was planning - originally to be devoted solely to the Justice League, but was broadened in scope before final publication to incorporate the costumed hero revival as Alter-Ego - was referred to as fanzines.

In order to explain the existence of the Justice Society to a general audience - some of whom had the same names and powers as their 1960s versions - Schwartz and writer Gardner Fox incorporated the "similar yet different world" concept into comics, first when the Flash encountered his 1940s counterpart ("Flash of Two Worlds!", Flash # 123, September 1961), and then with the reintroduction of the Justice Society. Fan interest may have played a part in Schwartz's efforts to continue in that direction.

The discussion format Weingroff instituted brought together a coterie of fans who were not only devoted to the subject matter but expressed their thoughts with a degree of intelligence. It's not surprising that a segment of fandom forged careers in the comics industry and other creative arenas.

Next Time: Hero # 2 and the Marvel Explosion
Posted by Nick Caputo at 7:33 PM No comments:

My next few posts will focus on an early fanzine, Hero, sampling articles by comic book enthusiasts at the dawn of the superhero revival. Many fans, both teenagers who might not have experienced that era firsthand and adults who had actually grown up in the "Golden Age" - a period of time that began in the late 1930s with the debut of Superman in Action Comics # 1, and lasted into the early 1950s - yearned for a return to the fantastic characters that were in short supply for nearly a decade.

By the 1950s comic book content was dominated by genre material, the most popular being war, western, humor, mystery and romance. The once unbeatable superheroes who dominated the newsstands in the 1940s faded from popularity in the following decade, although a few of National/DC's long-running characters survived, specifically Superman (and related characters), Batman and Wonder Woman. In a period of four years (1956-1960) DC's attempts to update/revise once popular characters such as The Flash, Green Lantern and the "Justice Society of America" (as the Justice League, a more contemporary name that resonated with baseball fans) were tested in anthology titles, met with impressive sales and went on to headline their own titles. Companies such as Archie, Gold Key and Atlas attempted to follow suit, with varying degrees of success. 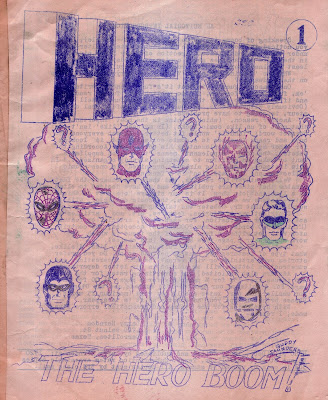 The cover to Hero # 1 (December 1962) spotlights DC, Marvel and Gold Key characters. Art is by Buddy Saunders, a prolific fanzine contributor and publisher who would go on to run his own profitable retail business, Lone Star Comics.

When 28-year-old Jerry Bails published Alter-Ego in 1961, a fanzine celebrating the heroes of his youth and promoting their revival, others followed in his footsteps (fanzines devoted to comic books were inspired by earlier amateur publications devoted to science fiction). Hero was one such publication, crafted by Larry Herndon, who was described in Bill Schelly's intriguing book, The Golden Age of Comic Fandom:

"One of the beautiful things about fandom was that physically challenged individuals could become giants in the fan community. G.B. Love was one example, and so was Larry Herndon of the Texas Trio. Herndon had muscular dystrophy and was generally confined to a wheelchair (though he could get around on crutches). Small of frame, and possessing genuine humility, Larry was one of fandom's most prolific writers and organizers. Editor of Hero, Batwing and later The Nostalgia News, Herndon wrote hundreds of articles, letters and ama-strips." 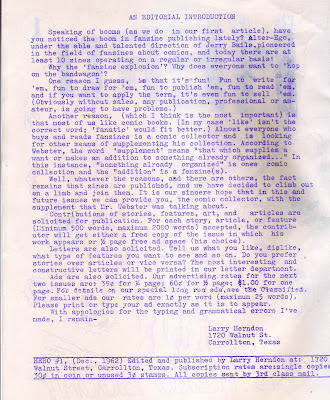 Herndon's editorial in Hero # 1 pointed to a growing interest in producing fanzines, which, according to Herndon, consisted of approximately 10 in 1962 - a number that would expand considerably in the years to come. Fanzines became an outlet for kids to share their knowledge and enthusiasm, but, perhaps of greater consideration, it gave them an opportunity to become part of a community. In the isolation of a small town, or the loneliness of a big city, comic book fans might never encounter another like-minded individual. The 1960s didn't have the technology of today's world; the "internet" was something you might read about in a science fiction tale (or superhero comic). Communication with fans outside your environment was problematic, particularly for many teenage fans with limited finances. Long distance phone calls could be quite expensive, so correspondence by mail was the cheapest way to go. Fanzines also provided an outlet for creativity; writing articles and drawing superhero adventures was a form of expression that helped many hone their skills for future professional work (editors such as Stan Lee and Julie Schwartz read and took notice of fanzines. Roy Thomas was one of many writers and artists who contributed to fanzines and later graduated to the pros).

And, as Herndon succinctly stated, it was also a lot of fun.

Herndon chose a long article by Harold Julian, "The Hero Boom", to open his debut issue (seen below in its entirety). I'll add a few observations afterward. 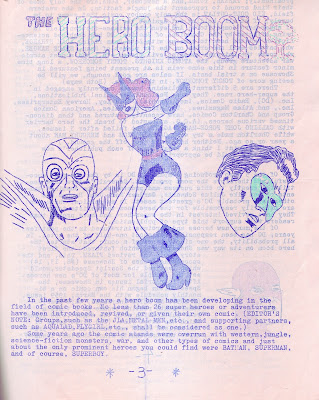 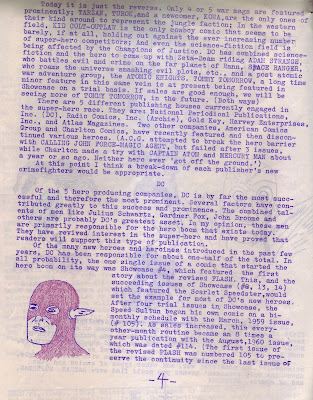 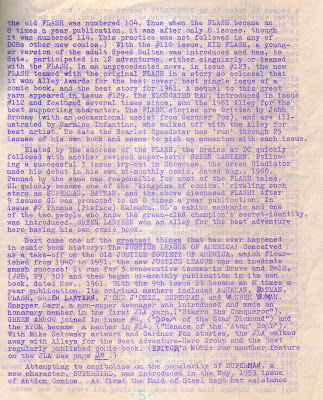 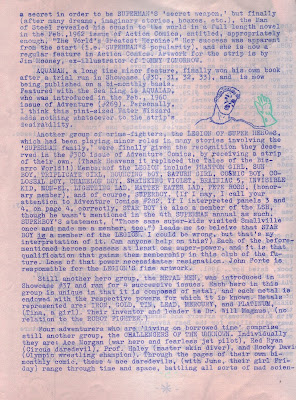 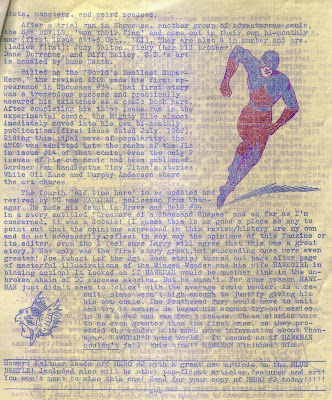 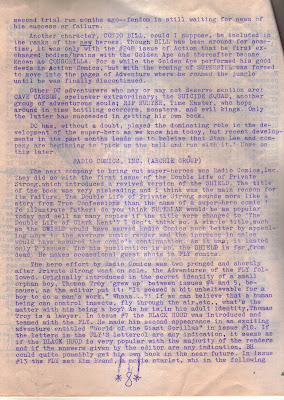 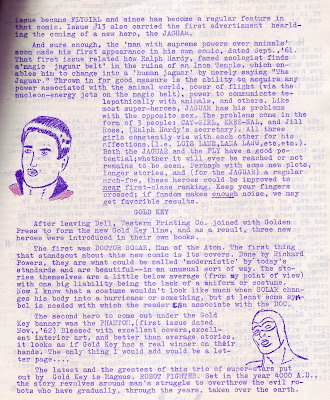 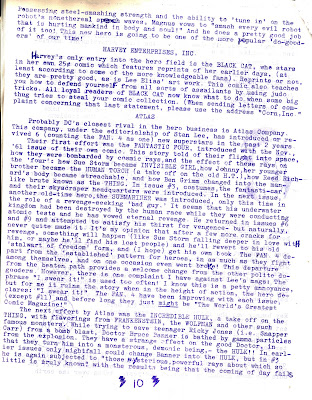 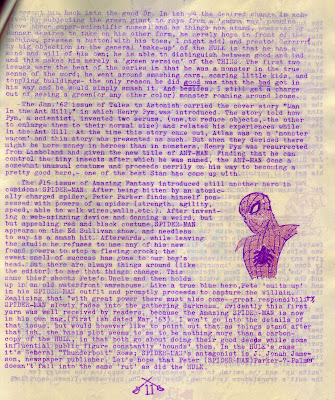 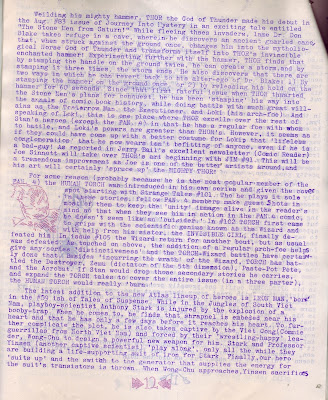 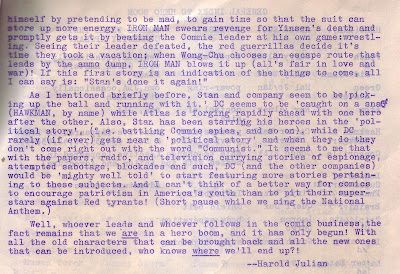 Although it is only one fans' opinion, Julian represented a segment of the audience that was clearly passionate about comic books. The thoughts he expressed, while awkward in places, conveyed an intense devotion to the subject matter. Julian's article is a 54-year- old chronicle from a period when National/DC was king of the hill, but upstart Marvel Comics (then known as Atlas and barely two years into their burgeoning superhero line) was gaining traction every month, as an awareness of their atypical approach grew.

Like many fans who wrote about comics, Julian focused with razor sharpness on superheroes, claiming that other genres were in decline. When you look at the actual product being published at the time it's obvious that was not the case. (Hero # 1 is dated December 1962, the same month some of the titles it discusses, such as Tales of Suspense # 39 and Amazing Spider-Man # 1 hit the stands. The fanzine was likely mailed out at the end of the month, or perhaps in January of 1963). 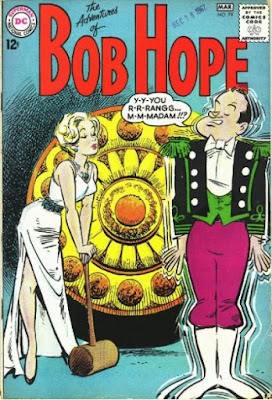 One was as likely to encounter comics such as Adventures of Bob Hope as they were superhero adventures in a 1962 candy store rack. Cover to # 79, March 1963 cover date. Owen Fitzgerald art. Image from the Grand Comic Book Database http://www.comics.org/

These comic books, often ignored by fans, were consistent sellers and appealed to the general public, including an important demographic: children. Superheroes and adventure/team titles were the order of the day for a majority of enthusiasts who put pen to paper, though, and their level of intensity will be explored next time out.
Posted by Nick Caputo at 7:35 PM 11 comments: