In the early 1970s Marie Severin was producing a plethora of covers for Marvel’s growing line of comics. Severin not only created cover roughs for other artists to complete (including Jack Kirby, John and Sal Buscema, Dick Ayers and Neal Adams), but penciled many of her own covers as well. Some of those covers were clearly rushed; lettering was often sloppy, with word balloons and copy that distracted from the art. There were, however, several gems that stood out; some of the most distinctive bore the stylized signature “7-EV,” which translated to Marie Severin pencils; Bill Everett inks. 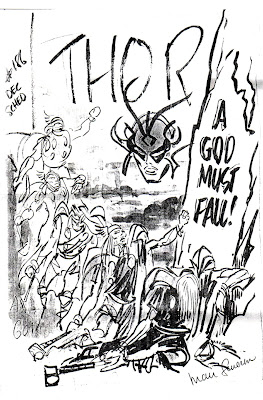 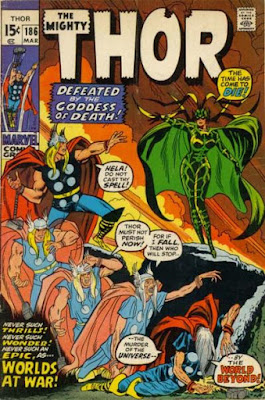 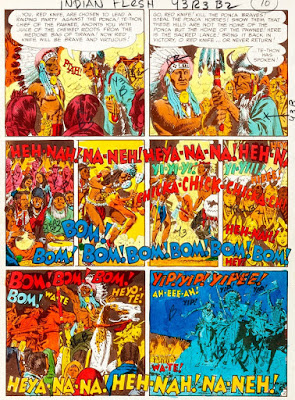 Marie Severin started her career at the prestigious and influential EC Comics in the 1950s, doing production work and coloring practically their entire line of crime, horror, war, science-fiction and humor titles. Her vibrant hues added another level of quality to EC’s coterie of creators.

In the early 1960s Marie began working for Marvel full-time, at first as production assistant to Sol Brodsky, but her duties grew after publisher Martin Goodman saw her art on a house ad. This led to an assignment penciling "Doctor Strange," followed by the Hulk and Sub-Mariner. Her storytelling skills were immediately obvious and while her efforts focused primarily on superhero fare there was always a sense that she wasn't taking this stuff seriously; a knowing wink at the audience. This was exemplified when Marie was allowed to lampoon Marvel's top heroes in Not Brand Echh. The title ran for 13 issues, from 1967-69, and Marie's art was represented in every one. Marie continued to be a force at Marvel for decades, contributing to the comic book field as both an artist and colorist, but her greatest talent, arguably, was her ability to find humor in life's absurdities and bring it to life with pen and brush. 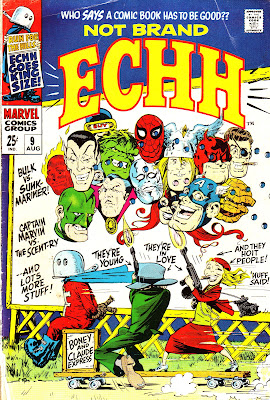 Marie caricatured most of the Marvel superheroes (along with the then-current movie BONNIE AND CLYDE) on the cover of Not Brand Echh # 9, August 1968. 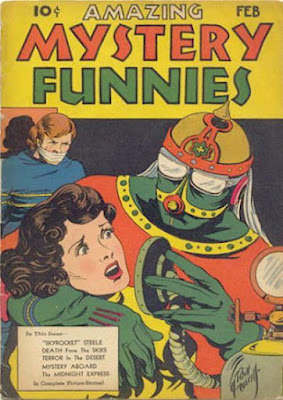 Early on Bill Everett displayed a flair for the unusual as this cover demonstrates. Amazing Mystery Funnies Vol 2; # 2, December 1939.

Bill Everett was not only one of the industries pioneers but a versatile creator who could do it all: write, pencil, ink, letter and color. From his earliest days Everett had a distinctive style, inspired in part by comic strip artists including Milton Caniff and Roy Crane (whose technique of employing Ben-Day to create shading he adopted). Everett created many original characters, but Prince Namor, the Sub-Mariner became an immediate hit, holding the attention of the buying public. Namor was an offbeat hero who inhabited an undersea kingdom and often fought against the human race. After his initial run in the 1940s he was revived for a brief period in the 1950s; less than a decade later Sub-Mariner was incorporated into the Marvel lineup by Stan Lee and Jack Kirby. 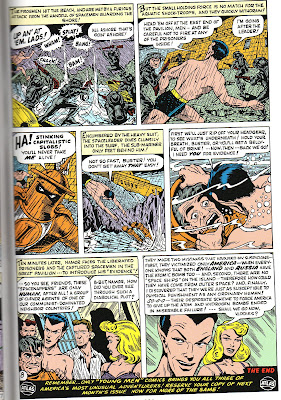 Young Men # 26, March 1954. Everett's Sub-Mariner feature included some of his favorite storytelling tropes: use of elements - especially water - to suggest a feeling of weight and depth, a somewhat cartoonish but expressive line and depiction of beautiful women. Everett art, lettering and possible story. Image from the reprint in Marvel Masterworks: Atlas Era Masterworks Volume 1.

Everett continued to produce superb work decade after decade, working on war, western, jungle, romance, horror and other genre material. After leaving comics for a period of time Everett took on the assignment to create a new superhero for Stan Lee in 1964, Daredevil, with assistance from Jack Kirby. He returned to Marvel full-time in 1965, where he drew "Doctor Strange," "The Incredible Hulk," and, eventually, returned to his beloved character, Sub-Mariner.

By the late 1960s was often employed to ink (and color) other artist’s pencils. His crisp, detailed rendering made Everett one of the best in the field. inked some of Marvel’s top artist’s, including Jim Steranko, Gene Colan and Jack Kirby.  While his inking style was elaborate,  rarely overpowered the pencils; he instead complimented the art, adding another layer - like frosting on a cake. 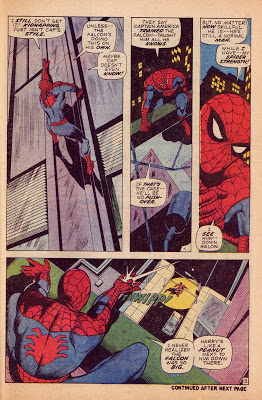 Gene Colan and Bill Everett's rendition of Spider-Man, from Captain America and the Falcon # 137, May 1971. 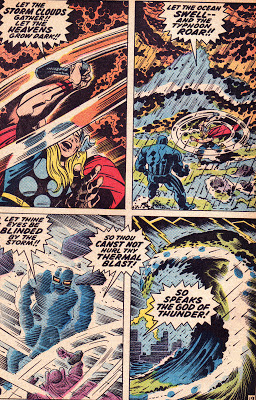 Jack Kirby on pencils and Bill Everett on inks; two masters of comic art. On this page from Thor # 170, November 1969, Everett gets to ink the oceans he so loved. A Kirby/Everett Sub-Mariner would have been wonderful to see.
inked a series of covers over Marie Severin’s pencils. Below I've assembled (I believe) every pairing of the two dynamic artists. While many inkers complimented Marie’s pencils, including Frank Giacoia, Herb Trimpe, Dan Adkins and Tom Palmer, Everett’s embellishment meshed perfectly with her style. Marie often designed busy covers utilizing background characters;  added depth with his intricate inks. They lent their talents to a number of superhero covers, including Daredevil, Iron-Man and Spider-Man (in Marvel Tales) and produced exceptional art for the mystery and monster line, including  and Where Monsters Dwell. Oddly enough, with one exception the team never drew covers for characters they were closely associated with (i.e. Sub-Mariner and the Hulk).

Note: All the covers are suspected to be colored by Marie. 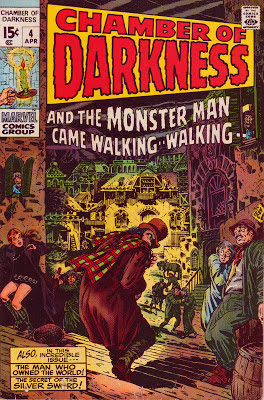 Severin and Everett's first cover collaboration was one of their very best. Everett was at home in the horror and suspense genre, having drawn countless exceptional covers for Stan Lee in the 1950s. Detailed buildings and fearful citizens populate this scene, with faces peering out of windows. The muted colors add considerably to the mood. Sam Rosen lettering on all covers unless otherwise noted. Chamber of Darkness # 4, April 1970. 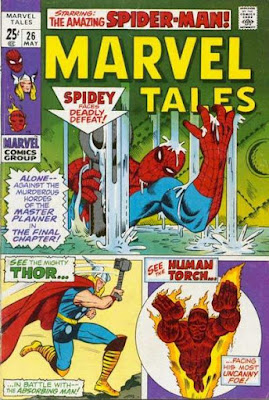 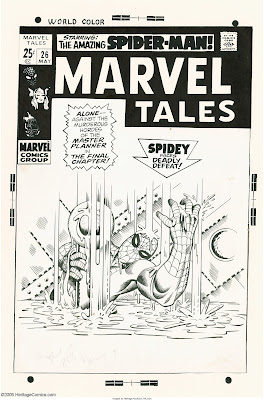 Severin and Everett only drew the top image of Spider-Man, based on Steve Ditko's dramatic representation from Amazing Spider-Man # 33. Jack Kirby and Chic Stone stats of Thor and The Human Torch take up the bottom portion of the published cover. The original artwork from Heritage Auctions is seen below. 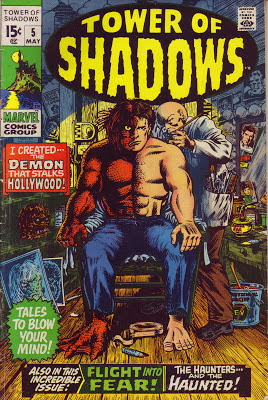 The Severin/Everett team really outdid themselves on the mystery/monster covers. This deliciously rendered cover includes a busy background, although the coloring keeps the focus on the foreground figures.  And, no, that's not the Puppet Master applying makeup. Can YOU spot their unique signature? Tower of Shadows # 5, May 1970. 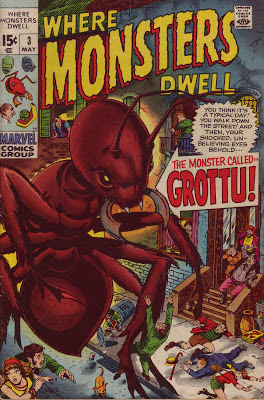 A typical sight for residents of New York City - a giant ant terrorizing citizens in the streets! Where Monsters Dwell was a reprint title that featured pre-hero monster stories. The interior story that relates to the cover scene, reprinted from Strange Tales # 73, February, 1960 and drawn by Jack Kirby, was inked by Bill Everett a decade earlier. The "Sev/Ev" signature can be seen on the lower right side, next to the stoop. Where Monsters Dwell # 3, May 1970. 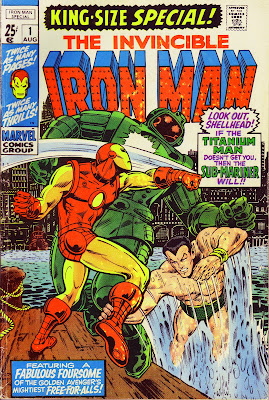 Iron Man Special # 1, August 1970, is the only instance where Marie penciled an Everett inked Sub-Mariner. Their signature can be observed next to Iron Man's left foot. 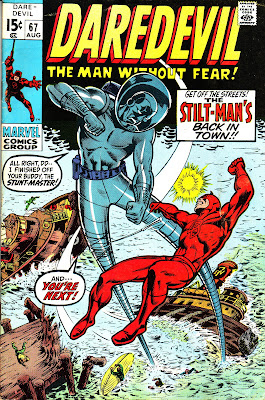 Another water based background. Signature on the sunken ship to the right. Daredevil # 67, Aug 1970. 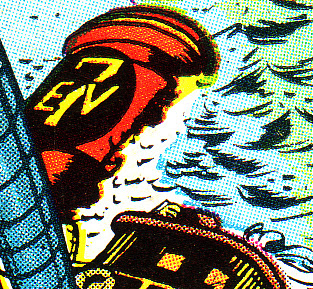 Close-up of the stylized "E7V" signature. Variations appeared on most of their covers. 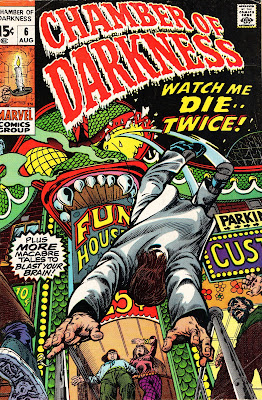 This is my least favorite of their mystery-oriented covers. I suspect Marie may have made solo alterations on the falling man; perhaps the original was rejected by the Comics Code and Marie toned it down? Whatever the case, the figure doesn't appear to be inked by Everett to my eye. There are some nice touches, though, particularly their signature on the underside of a sneaker. Chamber of Darkness # 6, August 1970. 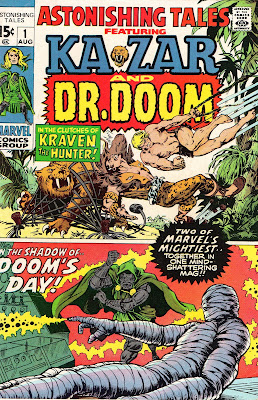 Marie and Bill were picked to inaugurate the cover of Astonishing Tales # 1, August 1970. The split format leaves less room for detail and has a rushed quality to it, in particular the Dr. Doom section, which may include alterations before publication by Marie or another hand. Morrie Kuramoto lettered the top half and Sam Rosen the bottom half. 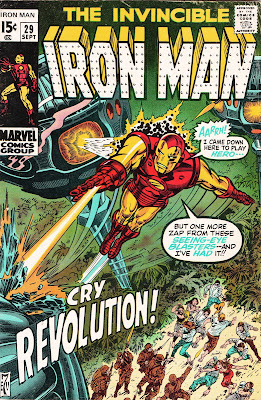 Crowd scenes were a staple of Severin-Everett covers. One drawback in this period was an over-reliance on word balloons to explain the story. It can be argued that a powerful image by talented craftsman should be able to draw a prospective reader in. Iron Man # 29, September 1970. 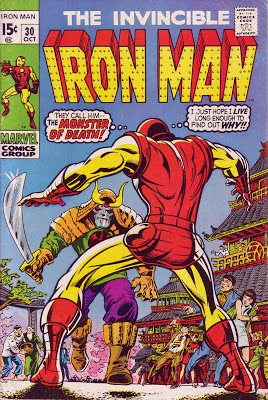 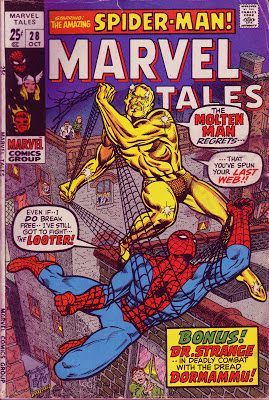 This time Severin/Everett produced a full Spider-Man cover with strong results, marred again by an abundance of word balloons. Note the detailed buildings and characters looking out windows. The truck in the lower left hand corner sports their signature. Marvel Tales # 28, October 1970. 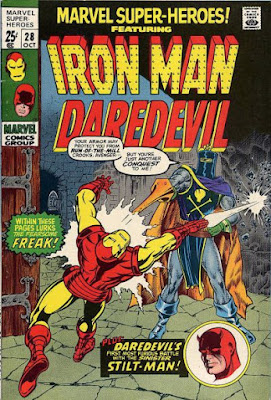 The team take a final crack at Iron Man and Everett inks Daredevil once again in the reprint title Marvel Super-Heroes (# 28, October 1970).
Everett probably cut down on his Marvel assignments at this point when he began producing black and white magazines for Skywald (detailed in an earlier post): 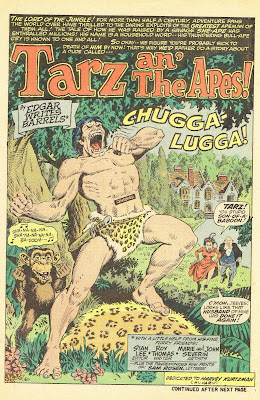 "...I Had always been interested in anything nautical, anything to do with the sea  -- ever since I was born I guess." Everett on Everett, an Interview by Roy Thomas, Alter Ego # 11, June 1978
taking the character in an unusual direction; combining the trappings of 1940s-era comics with a modern sensibility. 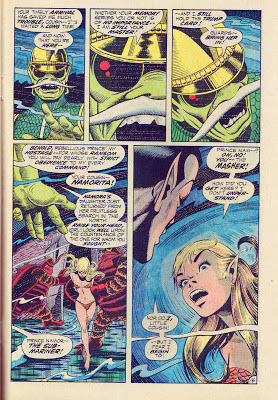 Everett's final go-round on his creation was an artistic leap and - I might argue - some of the most impressive work of his career. Although Everett had been drawing the ocean depths for decades, his ability to create the sensation of an otherworldly, breathtakingly rich world was heightened in these stories, perhaps due to years of honing his craft. Script and art by Everett; lettering by John Costanza, Sub-Mariner # 50, June 1972. 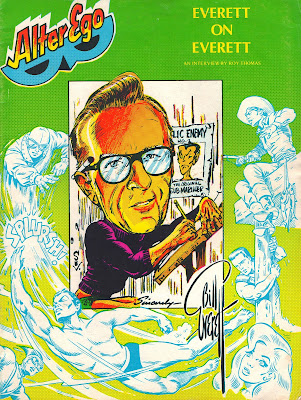 The last Severin/Everett "collaboration" was drawn in 1971 for Roy Thomas, to accompany his interview with the artist. Marie drew a caricature of Bill; Everett illustrated the surrounding characters. Unfortunately, it would not see publication until seven years later, in Alter Ego # 11, June 1978. Everett was never to see it, though, as he passed away on February, 20, 1973, at the age of 56.
Both separately and as a team Marie Severin and Bill Everett epitomize the talent, creativity and, quite often, the pure sense of delight in cartooning that flows from their pen and brush. They were also gifted at being multi-talented; able to pencil, ink, color, letter and write - tools that served them well in the comics' industry. Much of what they have produced is worthy of study, appreciation, analysis and admiration.
Posted by Nick Caputo at 8:00 PM 20 comments: