The OTHER Kirby Rawhide Kid cover

Following up on my last post I've found another alternate Jack Kirby western cover, this time featuring the Rawhide Kid.

Kirby and Lee created a new Rawhide Kid when  the title was revived with issue 17, August 1960. Aided greatly by the original Rawhide Kid's artist, Dick Ayers, on inks, the new Kid was a success - a veritable James Cagney tough-guy in the west. Kirby worked on the strip for 16 issues, pulled away once he became more important on the super-heroes. He was followed by Jack Davis, Dick Ayers, Jack Keller and, for the longest run, Larry Lieber, who wrote and drew the strip continuously (with occasional fill-in stories by Dick Ayers, Werner Roth, and Paul Reinman) from # 42, October 1964, until # 115, April 1973 when it went all-reprint. Rawhide Kid finally rode into the sunset with issue # 151, May 1979. 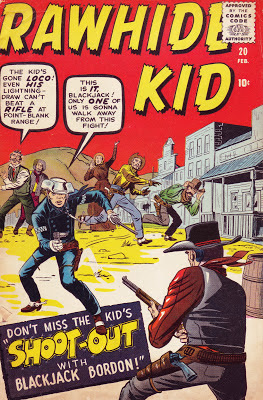 Issue #20 was Lee and Kirby's fourth Rawhide Kid issue. Kirby's cover image of the Kid became iconic, used often on pin-ups, a tee-shirt and cover symbol. The cover is a bit awkward in its construction, with the caption appearing between the Kid's foot and the badman. The lettering is also odd, clearly not the work of Artie Simek and not a recognizable style. What is interesting is that another cover was rejected, appearing for the first time (I'm guessing) at the Dutch company Classics/Williams, which also featured the unpublished Kid Colt cover, as seen in my last post. 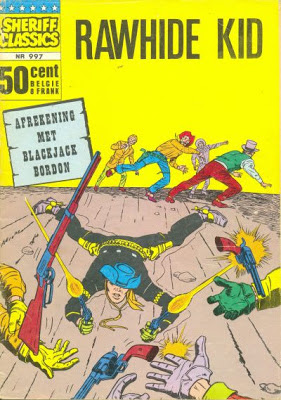 The rejected cover showed up seven years later at the Dutch company. I find this cover image more appealing than the published version. The Kid is the center figure, with only the criminals weapons and hands shown. Like the printed version, the background figures are fleeing. Why was this cover replaced? I can only speculate that Lee or Goodman wanted the villain to be seen.

But that's not the end of the story. The original cover WAS finally published in the states 15 years later, unnoticed and without fanfare. 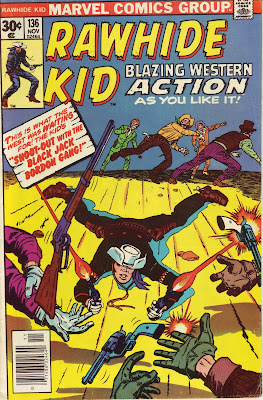 As noted, Rawhide Kid had been a reprint title for a number of years, and the covers alternated between new art, usually by Gil Kane, and reprinted covers. Kirby stories and covers were used beginning with # 134, and while there were some alterations and relettering, they were recognizable as reprinted from the original run. When I first saw this cover I thought it might have been an image taken from the interior, but that was not the case. I was never 100% sure the image wasn't a blow-up from an earlier issue, but when I recently discovered that it appeared as early as 1968, complete with the Black-Jack Borden title, it confirmed that the cover was an unpublished version.

Perhaps I'll find other such discoveries. If so, I'll be sure to share them here.
Posted by Nick Caputo at 11:19 PM 6 comments:

Over the years I've discovered instances where foreign comics reprinting american stories were provided original stats from publishers. When compared to the printed covers alterations ranged from minor (movement of copy or relettering of a word) to more comprehensive (the Ditko Spider-Man figure redrawn by Jack Kirby: Amazing Spider-Man # 35) . These unaltered stats were sometimes used on reprints in the states as well. Less often, an unpublished cover would be used, usually uknown to most fans. It's always a thrill to find such surprises and compare them to the originals.

The Dutch company Classics/Williams reprinted many Marvel comics in the 1960s and 1970s, ranging from superhero to pre-hero monsters. They also reprinted many of Marvel's cowboy heroes in the comic Sheriff Classics. This title cover featured the likes of Kid Colt, Rawhide Kid, Ringo Kid, Two-Gun Kid (as Twee Pistolen Kid) and Ghost Rider (as, my favorite, De Spookruiter). 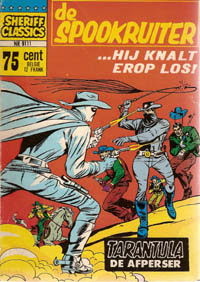 
Classics/Williams employed a mixture of styles, included some attractive painted covers and many that copied interior scenes by their own staff, often closely copying the work of Jack Keller, Dick Ayers, Jack Kirby and Larry Lieber. The Grand Comic Book Database has many of these covers on their site, as can be seen here:

scroll down to view the Kid Colt covers and check the four pages of covers.

While looking through those covers I came upon one that was not familiar to me. I have all the Kirby Kid Colt covers, including those he drew for Gunsmoke Western, and this cover was nowhere to be seen: 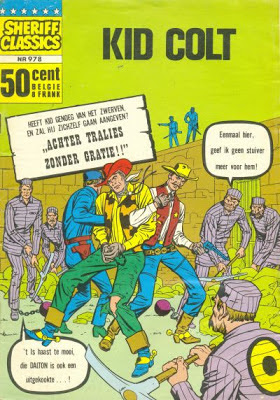 Sheriff Classics # 978, circa 1967, published by Classics/Williams. Image from the GCD.

The above cover art is pencilled by Jack Kirby and appears to be inked by George Klein. If the inking is the work of Klein it narrows the period when it might have been produced, since Klein inked Kirby on a number of covers and stories in the early 1960s, including Fantastic Four #'s 1 & 2. It immediately brought to mind a cover that also featured convicts, so I rummaged through my Kid Colt collection. It didn't take too long to find this cover: 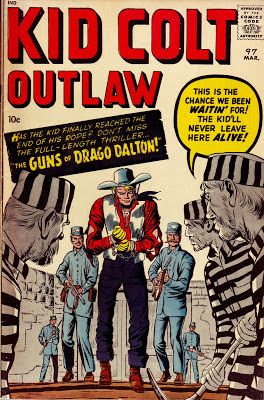 This cover also has Kid Colt in shackles and in a prison yard. One can also understand why the original cover was replaced. While the convicts in the foreground and background are well drawn and dramatic, the figure of Kid Colt is awkward. The published cover has perfect symmetry. The readers eye moves along with the convicts to the center figure of a despondent Kid Colt, with two police officers on either side. In the background stand two smaller offices and the prison walls. Dick Ayers' brushwork is excellent, as is Stan Goldberg's use of gray tones on the convicts. Stan Lee places Artie Simek's lettering above the artwork, although the cover could have worked just as well with no copy. The cover is an example of Kirby's ability to create images that draw the reader in. What kid wouldn't want to pick up the comic and read the story inside?

The unpublished cover is an example that not every design worked. Stan Lee told me he often provided cover layouts for his artists, and he may have done so on these covers. Perhaps after he saw the original he realized it did not have the dramatic punch that was needed. It's entirely possible that the change was made at the directive of publisher Martin Goodman, who knew how important covers were to sales. In this period Kid Colt was a very popular title and strong seller, so it would be no surprise that the cover was scrutinized thoroughly. It's possible Kirby himself redesigned the new cover. Whatever the case, Kid Colt # 97 is an example of a redrawn cover that was improved tremendously in its second take. How many others still exist waiting to be found?