While early comic book fanzines included contributions by professional artists such as Carmine Infantino, Jack Kirby, Joe Kubert, Russ Manning and Paul Reinman, none were as prolific as Steve Ditko. The talented artist took an interest in these unique publications, created by a dedicated cadre of teenagers, young adults and older fans. Often falsely categorized as "reclusive", Mr. Ditko actually embraced fandom. The many drawings seen here present another side of the man, consisting of a generosity of spirit and an appreciation of the creativity and freedom the fanzines provided. 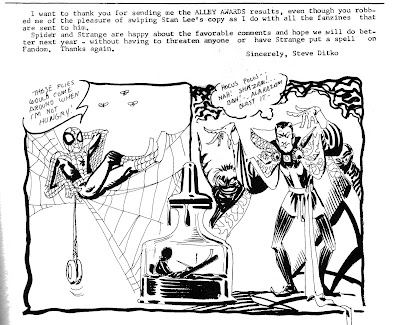 Alter Ego was one of the earliest comic book fanzines, originated by Jerry Bails and continued by Ronn Foss and Roy Thomas. Steve Ditko made his  fanzine debut with its sixth issue, illustrating a letter he wrote. The playful drawing not only features Ditko's two signature characters, Spider-Man and Dr. Strange, but a caricature of the artist at his drawing board, inside an inkwell. Variations of this self-portrait, utilizing his tools of the trade (pencils, brushes, erasers, ink) have appeared throughout his career and define the intensity of the artist. Ditko's interest and enthusiasm for fanzines is also captured in his letter, as he jokes about "swiping" editor Stan Lee's copies from the Marvel offices. 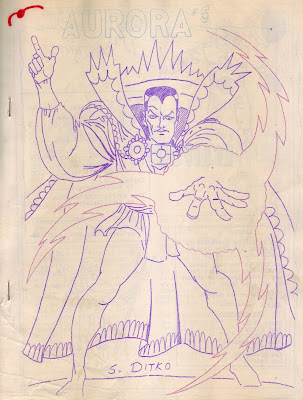 Ditko drew the cover for Len Wein's Aurora # 5 in 1964. In a few years Wein would become a writer and editor for Marvel and DC, working professionally with Ditko from time to time. This was the final issue of Aurora, whose print run was a mere 135 copies! 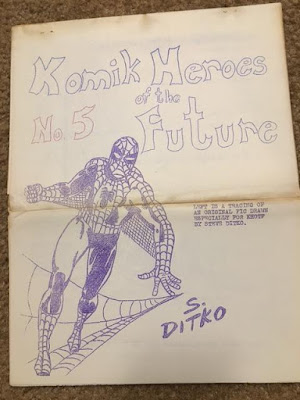 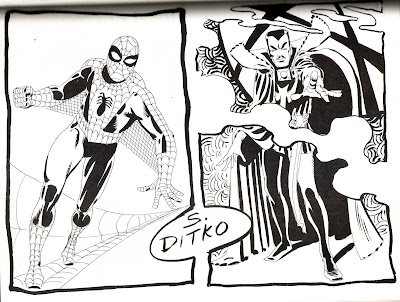 Komik Heroes of the Future was clearly a crudely produced fanzine, but I have to give editor Don Schank a little slack since he explained in his editorial that # 6 would be his last issue because he was soon entering HIGH SCHOOL! Extra props go to Schank for landing a short interview with Ditko and a cover (traced over for reproduction purposes) and a dynamic illustration of  Spider-Man (which looks to be the same image as the one used for # 5, although this is fully drawn by Ditko) and Dr. Strange. 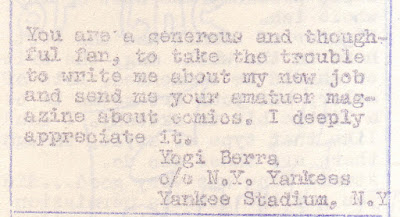 Although it has nothing to do with Ditko, as a baseball fan I couldn't resist showing this letter from Yogi Berra that appeared in the letters section of Komik Heroes of the Future # 6. I'm assuming Schank was either a Yankees fan or was aware that Yogi read comics! 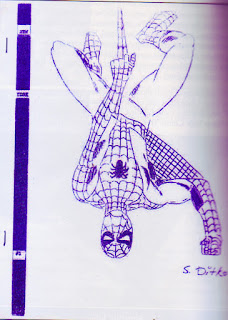 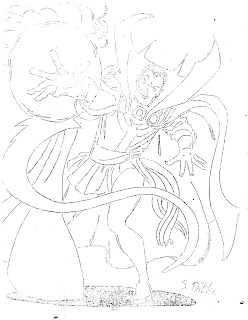 In addition to his fanzine contributions Ditko drew the cover and an interior Dr. Strange illustration for the 1964 New York Comic Con booklet. The first official convention took place on July 27, 1964, organized largely by fan Bernie Bubnis. Ditko showed up for the festivities, his first  - and last - public appearance. 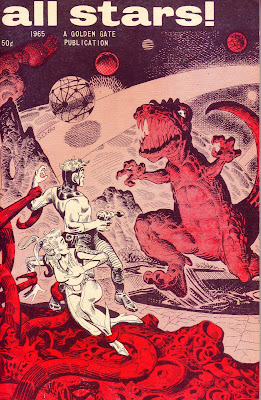 Ditko illustrated this extraordinary Flash Gordon styled sci-fi cover for co-editors Bill Dubay, Marty Aubunich and Rudi Franke. What's even more amazing is that the highly-detailed cover was not an unused piece laying around his studio; it was actually based on fan artist Ronn Foss' interior story. 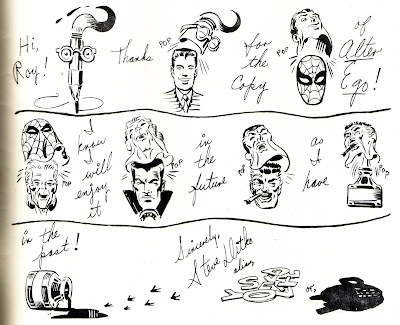 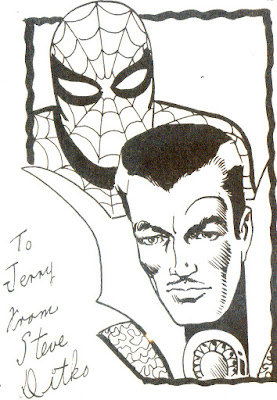 Ditko personalized this drawing to one of fandom's pioneers, Jerry Bails. It appeared in The Comic Reader # 33, January 1965. 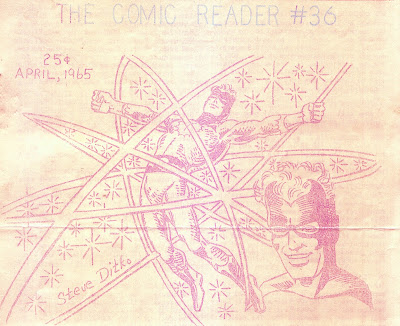 A Ditko illustrated Captain Atom graced the cover of The Comic Reader # 36, April 1965, a character he had drawn for Charlton in 1960-61. As related in the news section, the hero was being revived for a three issue tryout, consisting of Ditko drawn (and Joe Gill scripted) stories. "If it catches on, Steve will probably be asked to continue the series." The author was correct. In six months Ditko returned to draw his first super-hero series. 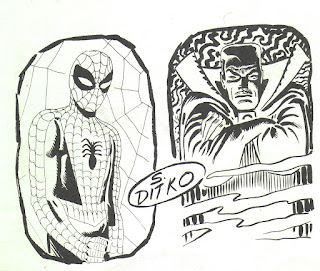 Another Spidey-Dr. Strange combo appeared in The Comic Reader # 42, October 1965. Ditko wrote letters, contributed drawings and provided information on his latest work to many issues of the long-running and respected news zine. 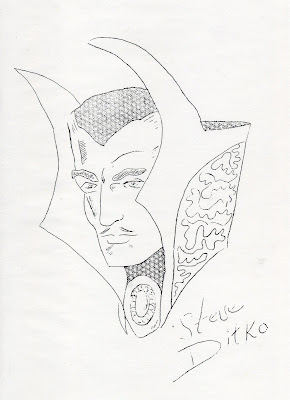 The Dr. Strange illo originally appeared in Bill Schelly's Super Heroes Anonymous # 2, March 1965.
The crude mimeograph technology forced the thirteen year old to trace over Ditko's art for reproduction, leading to a weak result. As Schelly related in his excellent book, Sense of Wonder: A Life in Comic Fandom, Ditko admonished the teen for publishing the sketch without asking the artists permission. Image courtesy of Bill Schelly. 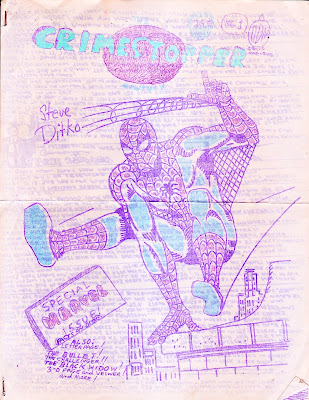 Rarely seen, this cover image of Spider-Man was to be the last Ditko drew for fanzines. Crimestopper # 1, April 1965. Colors by John Hayward. 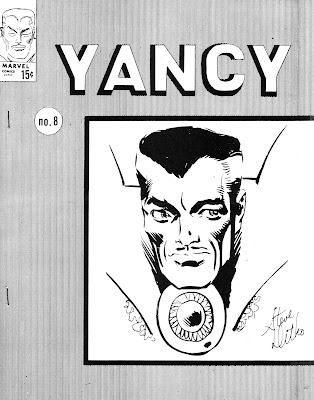 Ditko's impressive Ronald Coleman-ish portrait of Dr. Strange appeared on the cover of Marty Arbunich and Bill Dubay's Marvel oriented fanzine, Yancy Street Journal # 8, May 1965. These two illustrations represent Ditko's final fanzine drawings of his two beloved heroes. In less than a year he would quit Marvel and never draw either Dr. Strange or Spider-Man again. 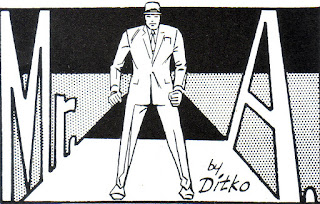 In 1967 Steve Ditko created Mr. A, the moral avenger who first appeared in Wally Wood's publication, witzend. Wood's magazine was both a place where creators were freed from the restrictions of mainstream comics and an outlet to own their characters. One of the earliest mainstream professionals to jump aboard was Ditko. In the years ahead the artist devoted most of his fanzine efforts on Mr. A stories, essays and other personal work, although a few exceptions appeared from time to time, as we'll see. 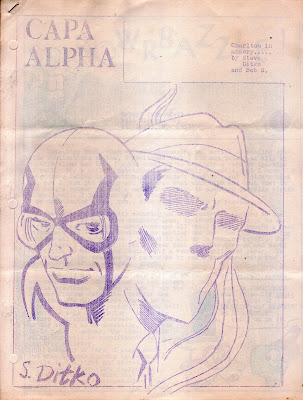 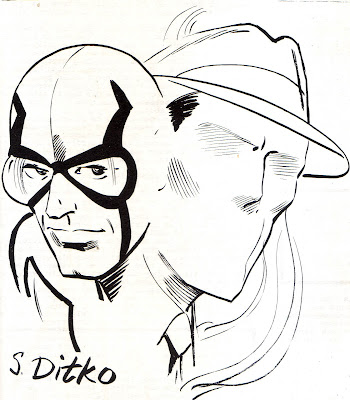 
Two versions of the same drawing. From what I can ascertain Capa Alpha was published by Don and Maggie Thompson and mailed out by Robert Schoenfeld (my issue is both unnumbered and undated, but judging by the letters of comment on the previous two issues and cross-referencing information with the concurrent Comic Reader - also edited by Schoenfeld - the dates seem to add up). The Blue Beetle and The Question are two characters Ditko worked on for Charlton in 1966-67. The Beetle was a very early superhero that Charlton acquired from a defunct company; Ditko took the bare bones and greatly revised the character. The Question was a non-super powered hero who fought for justice. Due to Comics Code Authority constraints, however, Ditko's stories were less violent than the similar Mr. A stories that appeared in fanzines, which had no such restrictions. 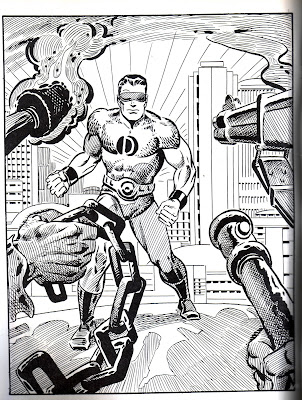 Comic Crusader featured an impressive mix of articles and fan-drawn strips. Martin Greim was an enthusiastic supporter of Ditko's independent work and published quite a few of the artists stories over the years. Ditko contributed this dramatic drawing of The Defender, a character created, written and drawn by the publisher. 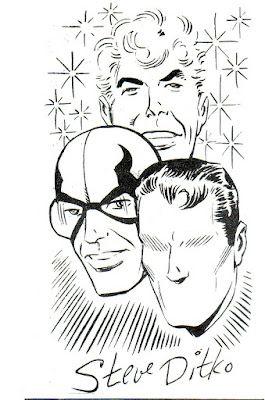 A trio of characters Ditko was associated with at Charlton, this illustration appeared in Realm # 3, November 1970, although I wonder if this piece was drawn earlier, since none of the three had appeared in comics for a few years. 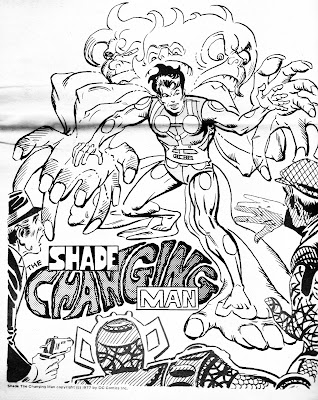 From 1971-1976 Ditko's fanzine efforts centered exclusively on articles, essays and stories featuring Mr. A and other independent work. Ditko illustrated the cover to Gary Groth's The Comics Journal # 33, June 1977, spotlighting his new creation for DC, Shade the Changing Man. 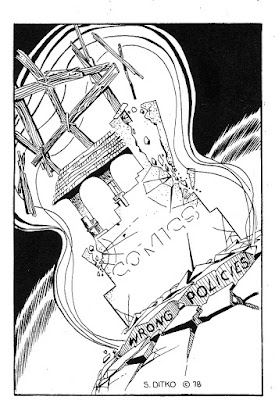 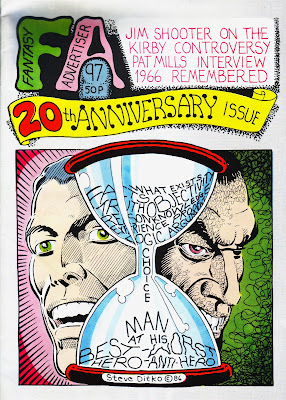 After this point Ditko choose not to participate in drawing single illustrations for fanzines. An occasional letter surfaced in places like Comic Book Marketplace, but from 1988 to the present day Ditko's essays and independent efforts have largely been in tandem with co-publisher Robin Snyder.

Steve Ditko contributed to fanzines for a great many years, offering his time, talent and professionalism to even the weakest of publications. Ditko's interest in the fan community was apparent not only in his drawings, but extended to stories of individual encouragement. His presence in that formative period was an inspiration to those who loved the medium and sought to create a unique voice of their own. 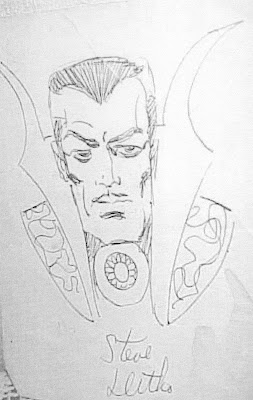 Pictured above is a rare sketch Ditko drew in ball point pen for a fan at his first and only convention appearance in 1964. Ditko has long since declined requests for drawings of his characters - so don't ask - but back in those early days he was of a different mindset. Do other examples exist??

The campaign has ended, but if you're interested in purchasing this or other Ditko publications contact Robin Snyder at snyderandditko@icloud.com or go here:  http://ditko.blogspot.com/p/ditko-book-in-print.html

A special thank you to Robin Snyder, a gentleman in thought and deed .
Posted by Nick Caputo at 8:29 PM 20 comments: