"There isn't anything quite as good ever. Nothing quite as good as summer and being a kid." Martin Sloan, as portrayed by Gig Young in The Twilight Zone episode "Walking Distance", written by Rod Serling. Originally aired on October 30th, 1959.

Those words echo through my mind when I think back to being a kid in the mid-1960s, when school was on hiatus and a seemingly endless summer stretched before me. The days were long and lazy, with plenty of time to explore back yards, enjoy neighborhood parks, go to the movies, play with friends and saunter off to candy stores for baseball cards, snacks and, of course, comics. It was around this time of the year, especially in the months of July and August, that Marvel released the majority of their Annuals*;  although dictated by the industry's awareness that most youngsters were off from school and theoretically had more coins to dispense with, it was nevertheless a fortuitous circumstance from a kid's perspective, as these were double-sized books starring their most popular characters. The Bullpen Bulletins page, which appeared in every comic, heralded their impending publication, and to an ever-growing and fanatical following (with yours truly being one of them), anticipation was high. Depending on their schedules, Marvel’s Annuals offered either all new material or a combination of original and reprint stories.

* From 1966-1971 they were called King-Size Specials, or simply "Specials", but everyone I know referred to them as Annuals no matter the cover designation. Nitpick Nick.


This house ad for a quartet of Annuals saw publication in Fantastic Four # 43 and other October-1965 dated comics. The "On Sale Now!" banner wasn't exactly accurate, since some titles might show up two to three weeks later. In those pre-internet days fans often had no way of knowing WHEN these comics would surface at their local candy store!

The first “King-Size Specials” I recall my older brother John buying off the stands at our local candy store* occurred in the summer of 1966. I was six years old, and the sounds of the Beatles' “Paperback Writer,” Sinatra’s “Strangers in the Night,” and The Loving Spoonful’s “Summer in the City” wafted through transistor radios.

* For a detailed account of my childhood adventures collecting comics and other miscellany on the streets of Brooklyn you won't want to miss this monumental post! https://nick-caputo.blogspot.com/2019/02/the-corner-candy-store.html  Ostentatious Nick. 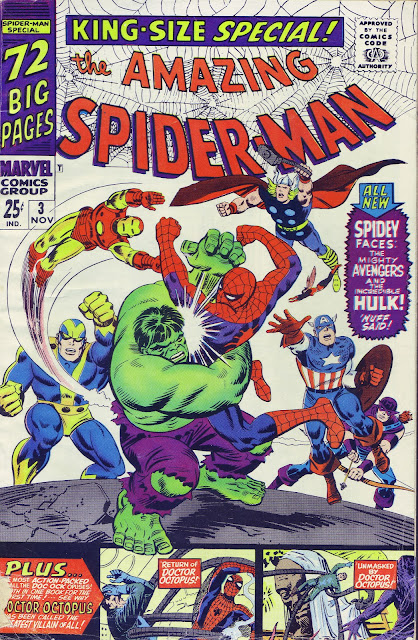 Amazing Spider-Man King-Size Special # 3, Summer 1966. John Romita pencils; Mike Esposito inks, Sam Rosen lettering. Bottom portion panels from interior reprint by Steve Ditko.  The Avengers, Spider-Man and the Hulk. A little bit of Heaven to a six year old!
Amazing Spider-Man Special # 3 had the wall-crawling hero attempting to join the Avengers. In truth it was a formula story by Stan Lee, John Romita and Don Heck (inking by Mike Esposito) and wasn’t comparable to Steve Ditko's earlier efforts, and, clocking in at twenty-one pages lacked even a sense of gravitas. Another drawback was the lack of special features that populated earlier Annuals, likely omitted due to deadline problems more than anything else. One highlight was a reprinting of Amazing Spider-Man #’s 11 & 12, a Lee and Ditko extravaganza that centered on the villainous Dr. Octopus. It was probably the first time I was able to fully enjoy that tale, as my brother only had issue # 12 in his collection. Ditko’s art and storytelling were riveting as always and Lee's dialogue was equal to the task. 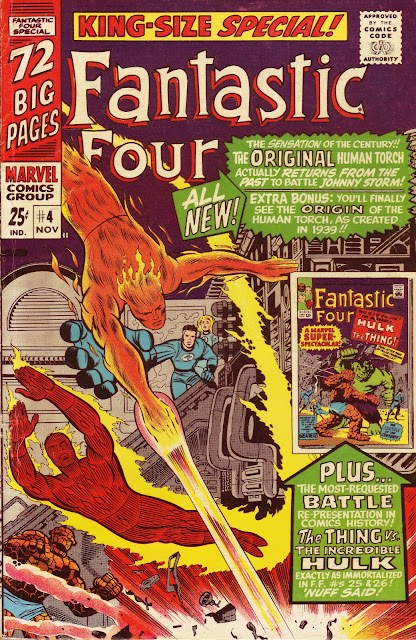 FF Special # 4; Jack Kirby pencils; Joe Sinnott inks; Sam Rosen lettering. The two Torch's meet and the battle of the century is reprinted!
Fantastic Four Special # 4 re-introduced the Original Human Torch, who ostensibly began the Marvel Age back in 1939 when Martin Goodman entered the business as Timely comics with his initial publication, Marvel Comics. Carl Burgos' creation headlined the '39 title and would go on to become one of his best-selling characters. Like Spider-Man, the story was again abbreviated in length and apparently crafted because Goodman wanted to protect his copyright on the character. The reprinting of FF #’s 25-26, featuring the first real confrontation between the Thing and the Hulk, Marvel's two powerhouse monster-heroes, was a bonus story for the many fans who had missed it on the first go-around. This despite George Roussos' heavy-handed inking (in one panel the Hulk actually looks like comedian Buddy Hackett. Perhaps he was watching one of Hackett's many appearances on The Tonight Show when he was working on that page!)
Other specials that summer included Sgt. Fury # 2 and Journey into Mystery # 2 (featuring Thor), both of which followed the same format; Marvel Super Heroes # 1, reprinting a golden age Sub-Mariner-Human Torch clash, along with early Avengers and Daredevil material, and, of course, there were titles that most boys wouldn't be caught dead buying, Millie the Model being one such example! 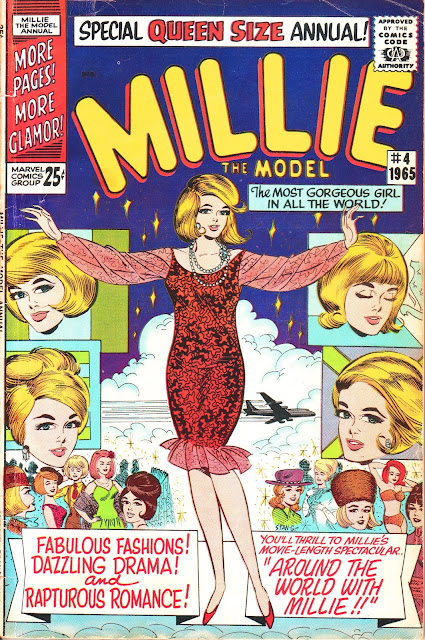 Millie the Model was an extremely popular long running title that starred in a total of 12 Annuals from 1962-1975. Stan Goldberg art and (likely) coloring, Sam Rosen lettering. Millie Queen-Size Annual # 4, 1965. 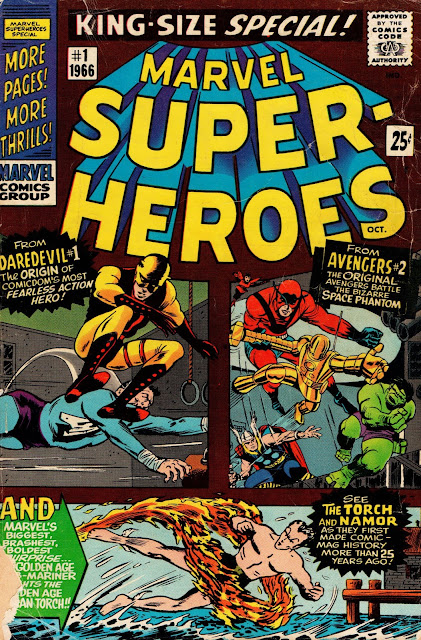 1967 was a return of sorts to earlier standards of quality. The Marvel corner box, which employed visual representations of their characters for easy reader recognition, was instead utilized with copy that emphasized: “All New – Not A Single Reprint!.” Perhaps editor Stan Lee took heed of fan complaints from the previous year, or there might simply have been more time before pending deadlines. Whatever the case, FF, Spider-Man, Sgt. Fury and Millie the Model returned, although Journey into Mystery (Thor) was sadly missing. New entries included Daredevil and the Avengers. While some of the headline material was weaker than previous efforts (the introduction of Psycho-Man and revelations of Sue’s pregnancy in Fantastic Four were exceptions), the special features, which included pin-up pages, “inside info” and humorous vignettes, offered material that was often missing from the monthly publications and appreciated by fans. 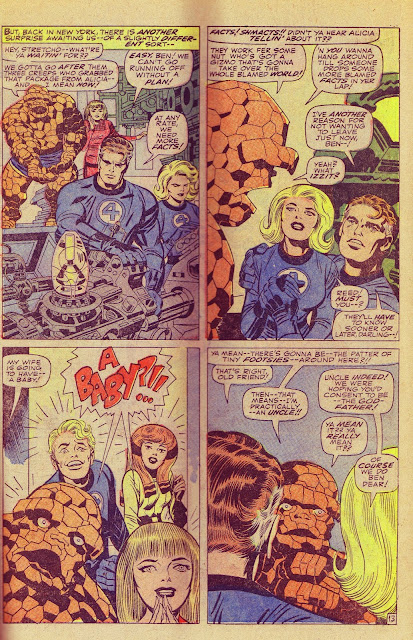 Lee and Kirby make a most surprising announcement in FF Special # 5, inks by Frank Giacoia; lettering by Artie Simek. 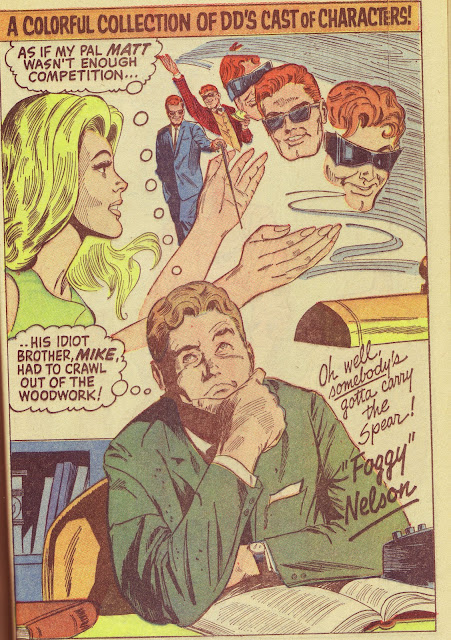 The 1968 Annuals included quite a few extravaganzas; the FF headlined the birth of Sue and Reed’s son (by Lee, Kirby and Sinnott); Spider-Man featured the mystery of Peter Parker's parents (by Lee, Larry Lieber and Mike Esposito); the Battle of the Bulge was re-imagined in (where else?) Sgt. Fury. (by Gary Friedrich, Dick Ayers and John Severin, whose superlative inking was always special) and the current Avengers encountered the original members (by Roy Thomas, Don Heck, Werner Roth and Vince Colletta. Daredevil was noticeably missing from the schedule (likely due to the previous years unimpressive sales figures), replaced by the more-popular Hulk, in a rather weak entry by Gary Friedrich, Marie Severin, Syd Shores and company, but overall the product was substantial. The following year, however, would institute unfortunate changes. 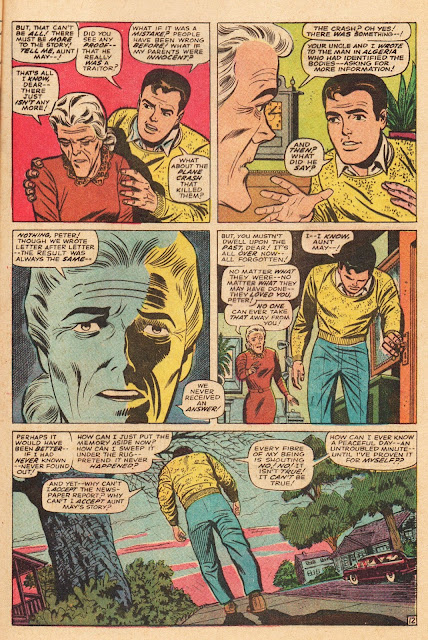 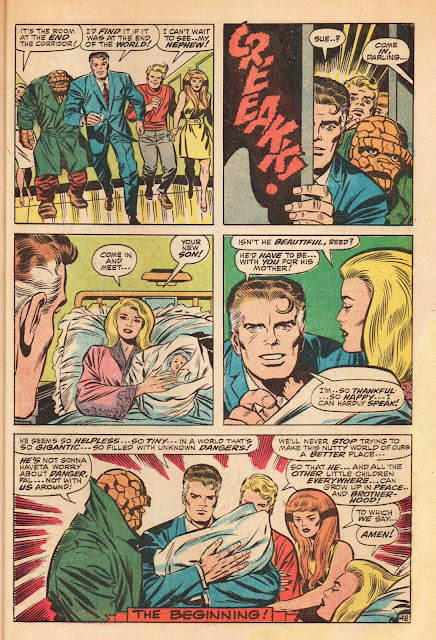 A touching moment in the pages of Fantastic Four King-Size Special  # 6 by Lee, Kirby and Sinnott.
Due either to lack of time or cost saving measures, the 1969 Specials were almost entirely reprints. It was a disappointment not to see extra length tales by Lee, Kirby, Thomas or Colan. Some of the material I had never seen before, particularly the first FF story and a reprint of Amazing Spider-Man # 2, both examples of Marvel's intriguing early efforts . A few pages of new material by Friedrich, Ayers and Severin surfaced in the Sgt Fury Special, which was a welcome addition, but it was only a taste of the glorious past. 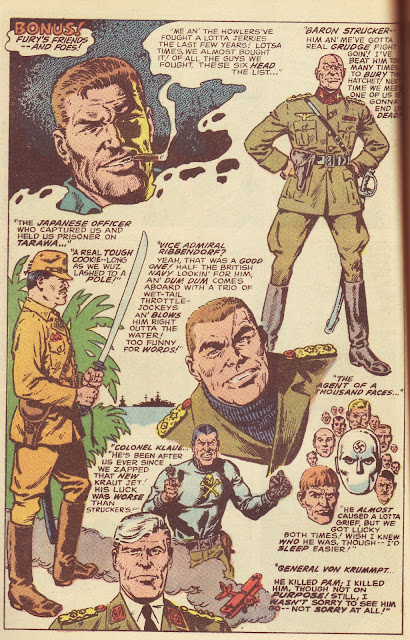 One of the few pages featuring new material that appeared in 1969, from Sgt. Fury Special # 5. Dick Ayers pencils; John Severin inks; Artie Simek lettering. Script likely by Gary Freidrich.
The institution of reprints remained the norm, and after 1971 the specials themselves were discontinued; a lack of time and personnel is the most logical reason. In that period Marvel was expanding their line at a hectic pace, and while it would have been wonderful to see Annuals produced by the likes of Gil Kane, John Buscema, Neal Adams, Jim Steranko or Barry Smith, it was not to be.
Annuals returned on a regular schedule in the mid 1970's, but with few exceptions they weren't very special anymore. Page counts were down, special features were sparse, and top talent was uncommon. Once crafted with thought and care, they became little more than over-sized issues of the regular monthly comics. 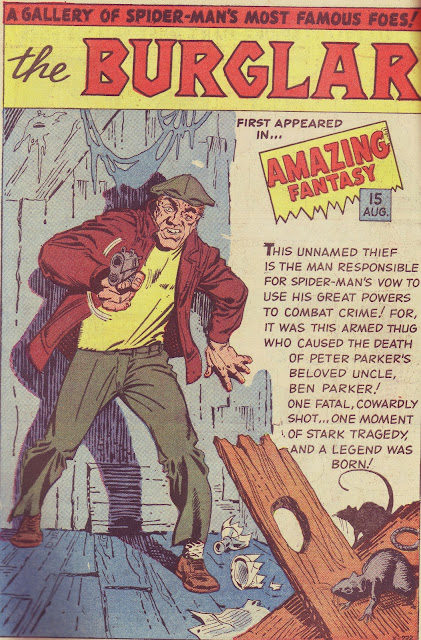 Steve Ditko's powerful staging and meticulous inking made his pin-up illustrations stand-out.
Lee, Ditko and Kirby understood that an Annual was a special event and often took pains to give the fans their money's worth. Although I didn't read them off the stands, FF Annual #’s 1-3 and Amazing Spider-Man Annuals # 1-2 remain benchmarks of what an Annual should be. The extra length Sub-Mariner tale and the origin of Dr. Doom were unique stories (a villain appearing in a starring feature was rare). FF Special # 3 was marred by its page length. While it was fun to see practically the entire Marvel line of heroes and villains in one story, the drama of Reed and Sue's wedding was largely neglected. The two Ditko-plotted and drawn Spider-Man Annuals were crafted with special care and is hard to top.

Occasionally, on a azure-blue summer day, my mind drifts back to those childhood afternoons, when for only 25 cents I was transported into a world of fantasy and imagination. I suspect Rod Serling would have understood.

If you found this entry of interest here are links to some of my earlier Annual-related posts: https://nick-caputo.blogspot.com/2014/06/51-summers-ago-fantastic-four-annual-1.html

...and for even more insightful discussion on Annuals go to Barry Pearl's Blog: