Werner Roth began working for Martin Goodman's line in 1950. A versatile artist, Roth produced quality work in many genres, including crime, war, western, romance and adventure. Some of the characters and features he was associated with include Apache Kid, Matt Slade, Venus, "Jet Dixon" and Lorna, Jungle Girl. When work dried up at Atlas in 1957 Roth (along with Gene Colan and John Romita) migrated to DC, where he drew romance stories in titles such as Secret Hearts, Young Love, Falling in Love and Young Romance. Roth was skilled at drawing attractive women, which served him well for many years. In 1965 he sought to rejoin a growing Marvel and was rehired by Stan Lee, where he worked over Jack Kirby's layouts on X-Men before taking over full pencils. Roth continued on the strip for two years, working for other companies from time to time, including Gold Key and King comics. In-between his X-Men gig, he was also assigned work on a few Sub-Mariner stories in Tales to Astonish, as well as a short run on Kid Colt Outlaw.

On Kid Colt he was inked by a newcomer to comics, Herb Trimpe. Trimpe began his career assisting artist Tom Gill, who worked for Dell. Trimpe's first work for Marvel appeared in 1967, and his training consisted of penciling western fillers and the lead stories in two issues of Kid Colt Outlaw (#'s 134 & 135). Trimpe showed great promise and had  a strong eye for storytelling. One way of learning the Marvel style of dynamics was inking other artists, and Trimpe was soon assigned inking jobs over Dick Ayers (Ghost Rider # 7) and Marie Severin ("Dr. Strange") and, most importantly, "The Hulk", a character he would soon inherit and become closely associated with. To read more on Trimpe's career, latch on to Alter Ego # 124. 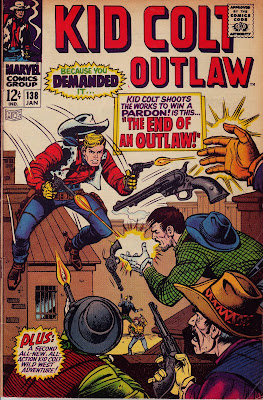 I emailed Herb Trimpe way back in Sept 23, 2003, when I was working on my article on Roth that appeared in Alter Ego # 42, although he never met the man, he did discuss his inking:

"The only thing I remember is how clean his pencils were, and I think they were over layouts in blue pencil. He was easy to ink, just connect the dots." 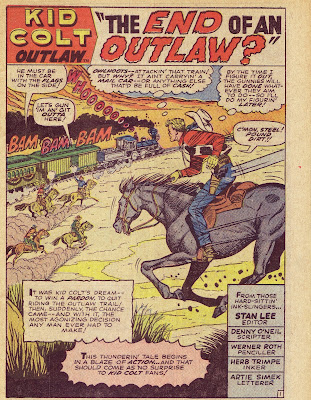 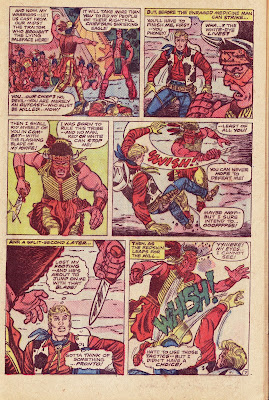 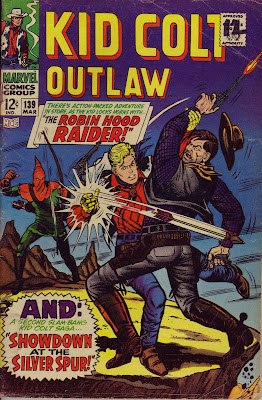 Roth and Trimpe's second and final Kid Colt cover. After this issue Kid Colt was cancelled for a period, resuming publication after an 18 month gap, although only in reprint form (# 140 included a Roth inventory story inked by Vince Colletta). Trimpe, however continued to draw a slew of exciting covers over the years, terminating when the Kid rode off into the sunset in 1979, Trimpe was at his side till the end, his last cover appearing on # 226, October 1978. Kid Colt Outlaw # 139, March 1968, Artie Simek letters. 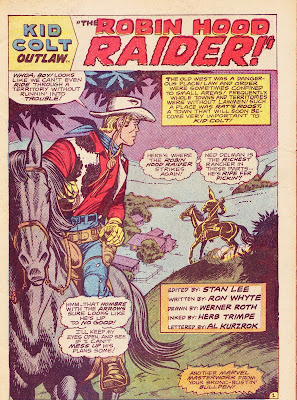 Roth draws the reader into the scene, with Kid Colt in the foreground. Trimpe's brushwork is equally effective. The splash page from the opening story. the same month this issue appeared Roth was teamed with Herb Trimpe on "The Origins of the X-Men" back-up in X-Men # 42. 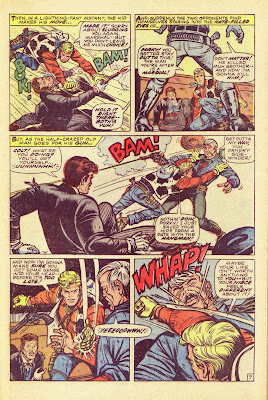 Roth displays his storytelling skills, with each panel flowing into the other with precision. "Showdown at the Silver Spur!" Gary Freidrich script, Artie Simek letters. 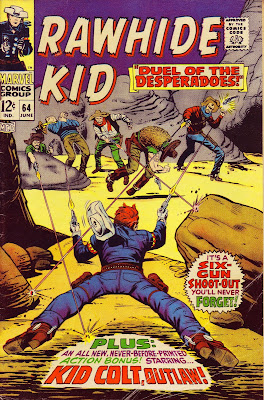 You can't keep a good "Kid" down, as the cover to Rawhide Kid # 64, June 1968, announces the (brief) return of Kid Colt. Herb Trimpe is on hand to ink Larry Lieber's cover, with Sam Rosen lettering. Trimpe also inked the lead Rawhide Kid story, although that combination was not as effective. 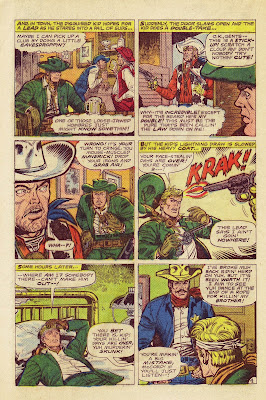 Two Kids are not always better than one, especially when one is an impostor! "The Deadly Double", Gary Freidrich story, Al Kurzrok letters. 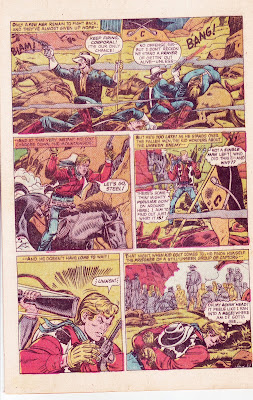 Trimpe's last inking job over Roth appeared in Rawhide Kid # 67, December 1968. The final Roth drawn story was presented in Kid Colt # 140 (November 1969) when that title was revived. At that point Trimpe was busy working on the Hulk, so Vince Colletta inked the story. Colletta would be assigned the inking duties over Roth when he moved to DC and penciled Lois Lane for a long spell, beginning with # 106, November 1970.

Herb Trimpe became a solid craftsman, taking over The Incredible Hulk from Marie Severin and working with her brother John, who superbly inked many of his stories. For over thirty years Trimpe worked steadily for Marvel. In addition to his run on the Incredible Hulk, Trimpe drew Nick Fury, Agent of S.H.I.E.L.D. "Ka-Zar", "Ant-Man", Defenders, Godzilla and Indiana Jones and many others. In 1985 Trimpe returned to the western genre, penciling a four-issue Rawhide Kid mini-series. Trimpe was often seen on the convention circuit and produced commission work. He was a hell of a nice guy who, sadly, passed away in April, 2015.

After the cancellation of Kid Colt, Werner Roth moved onto other strips, returning to X-Men for a period, over layouts by Don Heck, assisted on Avengers Special # 2, and a final western, the "Gunhawk" feature that appeared in Western Gunfighters. The majority of Roth's 1970s work was for DC, returning to romance stories, mysteries and, as noted, Lois Lane. Roth died of cancer on June 28, 1973, at the age of 52. Although Roth's style was more subdued than many of his peers, especially the larger than life "Kirby dynamics" that typified Marvel's Super-Hero line, his art had a quality of design and sincerity. Roth's son, Gavin, has also passed away, but some years back I was fortunate to contact him via email. He kindly responded to my numerous questions about his father and allowed me to publish his responses as a sidebar to accompany my article in Alter Ego. Gavin had this to say about his father's work method:

"Dad's training was more meticulous, starting with plotting the pages out, tightening it up, and finally finished pencils. When I say finished pencils, I mean that you could look at the page and the artwork sparkled. It had life; it was finished."

On a personal level, Gavin made this observation about his father:

"He appreciated other artists' work and would comment of how he liked what they had done, and why it worked as a piece of comic art. I never heard him say anything bad about anyone. He wasn't like that."

I think that THAT part of his personality shines through in much of his comic book work.

Werner Roth and Herb Trimpe were from two different eras of comics, yet both were backbones of the industry. While their art was never flashy or overly decorative, they could tell a story clearly and with an understanding of how a page flows. They worked in varied genres for many decades and their contributions to the field deserve to be recognized.

It staggers me to be reminded that Werner Roth died 40 years ago. In Scotland, Lois Lane comics drawn by Werner still popped up on the spinner-racks in newsagents in '73, due to comics being shipped as ballast to the U.K.

Some might go on sale immediately, others might lie in a warehouse for years. One could sometimes buy the same comic, brand new, years apart because of this, but it was a good way of discovering old comics at cover price in almost pristine condition. I bought several copies of the 1965 J.I.M. (Thor) Annual#1 in 1973 - brand-new, off the racks.

But back to Werner. I have very fond memories of his X-Men tales, reprinted in a British comic called Fantastic, back in the '60s. Really hard to believe he died as far back as 1973. A nice, clean style that worked really well over Jack Kirby's layouts - although he was no slouch when left to his own devices.

Thanks for sharing your memories Kid. I enjoyed Roth's X-Men work and think its underrated. Next to the flashy work of people like Kirby, Adams, Byrne and others it might be expected, nevertheless, his run is noteworthy.

I knew Werner and his son Jim [we went to college together]. He showed me some Batman frames he was working on.