Audrey Hepburn, Jack Kirby and a Cast of Thousands

Comic books often looked to movies for ideas, stories and current trends. Westerns, crime, romance, monsters and science fiction all filtered into comics. Simon and Kirby's Newsboy Legion were inspired by the Dead End Kids; Lee and Kirby's Hulk was a mixture of the Wolfman, Dr. Jekyll and Mr. Hyde and the Frankenstein Monster; a horde of giant insect and bug movies were echoed in Marvel and DC's late 1950's-early 1960's output.

Many artists were also moviegoers; they absorbed the storytelling, cinematography and intensity of their experiences and translated them to a different medium, where - in olden days (yes, kids, there was a time computerized special effects didn't exist), their pencils journeyed beyond anything movies could conceive.

Character actors represented a diverse offering of personalities of all types: they often brought a distinct flavor to the movies. Artists took notice, and many a comic book were scattered with these familiar faces.
And, of course, there were the movie stars, whose larger than life presence was another influence. There have been countless times I've looked at a comic and noticed a familiar likeness, either star or character actor, by artists such as Gene Colan, John Romita, Gray Morrow, Don Heck, Steve Ditko, Gil Kane and so many others.

Jack Kirby was a confessed movie enthusiast, and those faces saw their way in his stories throughout his career. From Edward G. Robinson to Charles Bronson, Kirby had a cast list to choose from.

Audrey Hepburn was a extremely popular actress in the 1950's and 1960's, well-known for movies such as Roman Holiday (1953), which she won an Oscar for best actress, Sabrina (1954) and Funny Face (1957).  In 1961 she was in another hit, Breakfast at Tiffany's. I particularly enjoyed her performance in Wait Until Dark (1967). Hepburn exuded an air of sophistication, fragility and beauty, and her image sold scores of movie related magazines. 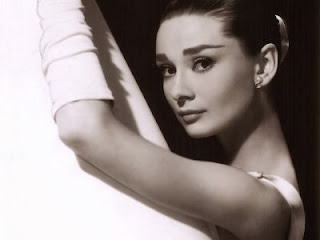 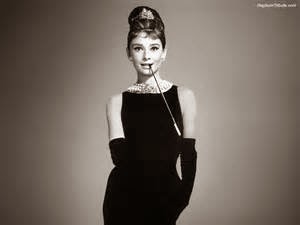 Stan Lee was also a movie fan, and often asked for familiar types, such as a Sidney Greenstreet villain, or an Errol Flynn hero. Lee and/or Jack Kirby took notice of the charismatic Hepburn 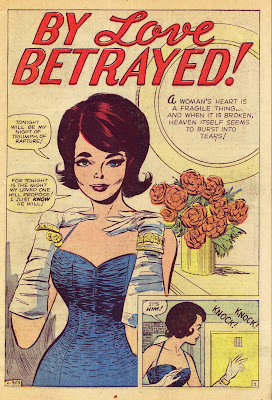 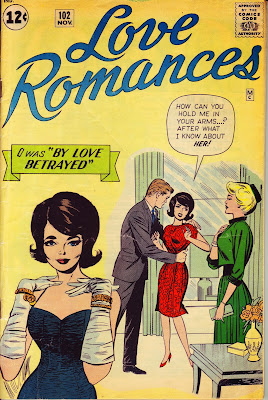 What's interesting is Kirby's image from the splash page is reused on the cover. Lee must have thought the Hepburn like figure was more attention getting than the three figures that occupy the rest of the cover (one of which is the same character). The three figures and background was probably reduced, cropped or otherwise altered, making the cover layout look odd. The new content was likely inked by Al Hartley. Sam Rosen letters, Stan Goldberg colors. 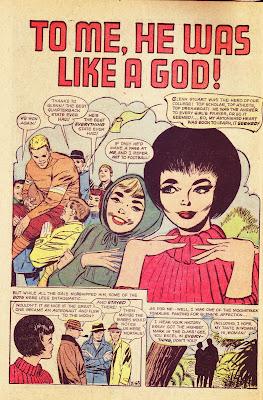 "To Me, He Was Like A God!", Kirby pencils, Colletta inks, John Duffy letters, Stan Goldberg colors? Again no scripting credits, although it reads like Lee (or Lee plot/ Lieber script) Love Romances # 104, March 1962.

Two issues later Lee reused the Kirby-Hepburn face a THIRD time. Compare the woman in panel one to the figures above. The hair and clothing is altered, and the eyes are moved to the left, but its the same drawing. As has been discussed in depth in earlier posts, Lee often tinkered with covers and splash pages, and alterations were usually completed by whoever was available at the time. Apparently, Lee thought Kirby's original drawing was not attractive enough.

I believe there are other Audrey Hepburn lookalikes (and other famous actresses) scattered throughout the romance line. Don Heck drew her type as well. And I'm sure other famous figures "appeared" at DC, Charlton, Dell and other companies. Today, the movie-comics influence has come full circle, and film looks to comics to appropriate ideas, visuals and characters. Kirby, not surprisingly, is one of the biggest influences.

For more on Audrey Hepburn and her films, check here:

Yo Nick, way cool analysis. Never seen or noticed this Hepburn connection before. Thanks a heap for posting!

Perhaps one of the most famous examples of an actor's likeness being used in a comic is Fred MacMurray as Captain Marvel. What sayest thou, Nick? (Or should that be 'thee'? I can never remember. Neither could Stan.)

I think these girls with their heart-shaped faces and piquant chins are based on Leslie Caron--see, for example, Caron in The Glass Slipper.

Glad you enjoyed it. Thanks.

Fred has been referenced as the visual for Cap, although I seem to recall another name bandied about. What say thee, fellow minutiae-ites?

Leslie Caron is a good example of "the look" in that period,and likely another image that Stan and the artists looked to. I'm sure there are a number of popular actresses in the early 1960's that fit the bill.

I recently saw two DC romance covers, one with the likeness of Barbara Eden, and the other a Gene Colan Ann Margaret.

Just for you, here is a link where Capt. Marvel and his likeness is discussed, with quotes by C.C. Beck:

And we also discover what famous actress Mary Marvel was based on. I'll give you a hint if you tap your shoes three times and say : There's no place like Marvel Mysteries.."

Great post, Nick! I will definitely keep a look out in my romance books for these movie-star likenesses.

The arms of the character in the example you gave is also very reminiscent of Marilyn Monroe's choreography in the "Diamonds are a Girl's Best Friend" number in Gentlemen Prefer Blondes.

To tell the truth, when I saw your first cover example the name that jumped into my mind was Jackie Kennedy. It's hard to describe to those who weren't there what a profound impact she had upon popular culture of the time--her features, hairdo, fashion choices, mannerisms, the lot.

Of course the all-time longest Audrey Hepburn comics homage is the Italian detective series "Julia," in which the heroine is unashamedly based on Audrey.

Jacque - a very good observation, and I wouldn't expect less from the queen of romance comics! As far as likenesses goes,look to some of DC's 1960s covers. I have seen Barbara Eden and Ann Margaret (by Gene Colan)

The Modesty Blaise from the newspaper strip had an Audrey Hepburn look about her, now that I come to think about it. Fuller figure 'though.

Beautiful stuff soon to once again see the light of day.