My indexing for the Grand Comic Book Database often leads to interesting roads. I've been adding lettering and coloring credits to Marvel’s titles, circa late 1950’s through the 1970’s. While going over some early Amazing Spider-Man interior credits (adding Stan Goldberg’s coloring credit, since he  colored just about all Marvel’s product from the late 1950's to around 1968) I included info on the early letters pages and many of Ditko’s outstanding pin-ups.
One credit I corrected was a house ad in Amazing Spider-Man # 1: “A Personal Message from Spider-Man”, which is actually a personal message from Stan Lee, explaining that a new letters section would soon be appearing. 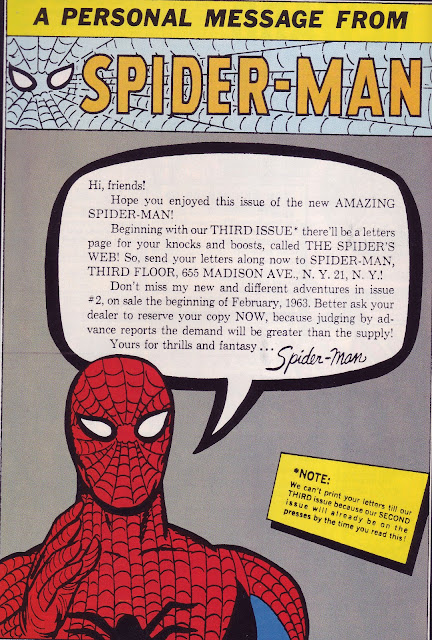 "A Personal Message from Spider-Man," Amazing Spider-Man # 1, March 1963, as reprinted in the Marvel Milestone Edition. Art likely by Sol Brodsky. Lee calls for letters and explains why they won't be printed in the 2nd issue.

The GCD credited Steve Ditko with the art, but that is clearly not the case. I suspect this is drawn by production head Sol Brodsky, although its possible Jack Kirby provided the pencils and Brodsky inked the piece. Ditko never drew Spider-Man with broad shoulders, nor is the mask or webbing accurate.
This got me thinking about Stan Lee’s house ads and promotional work in Marvel's early hero era (1962-63). which often consisted of crudely lettered (perhaps by Lee himself) copy scrawled on the top and bottom margins of story pages. Lee soon began to take up full pages to announce specific comics or new titles. This was not surprising, since house ads were prolific in the Timely era, also likely written by Lee. In time, though, a narrative was beginning to take shape, and Lee’s enthusiastic writing style and hyperbolic copy set a pace that drew the readers attention. 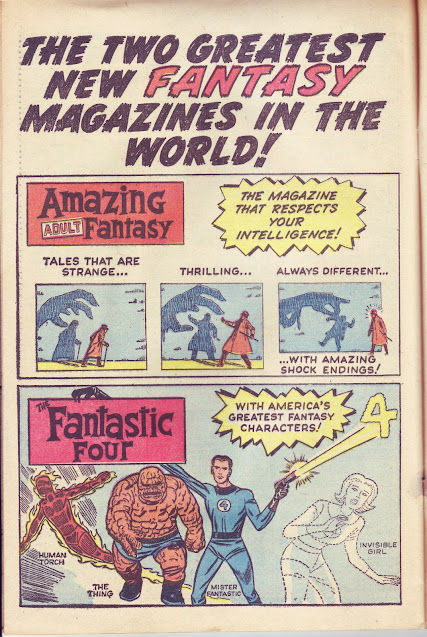 An early full-page ad for Amazing Adult Fantasy and the Fantastic Four, from Strange Tales # 95, April 1962. This was published at the time FF # 3 was on the stands. Steve Ditko drew the top half; an inventive 3 panel vignette; Kirby drew the bottom half, with inking by Sol Brodsky. Lee bombastically proclaims the two comics: "the greatest new fantasy magazines in the world!." Also worth noting is that Lee made mention of his Amazing Adult Fantasy collaborator on the cover of the selfsame issue: 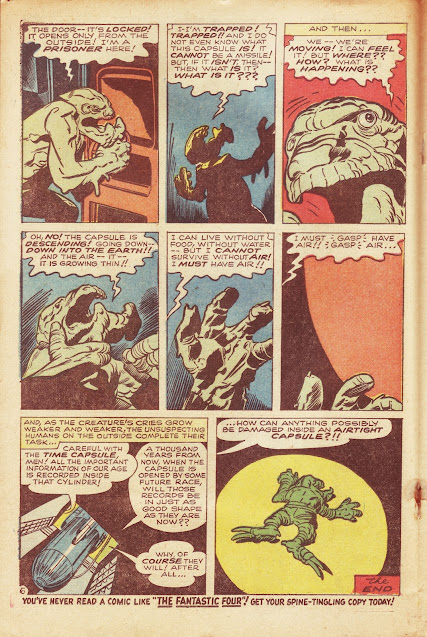 Lee's ad copy for the Fantastic Four is intriguing. What kid wouldn't be interested in buying it? From Strange Tales # 97, June 1962 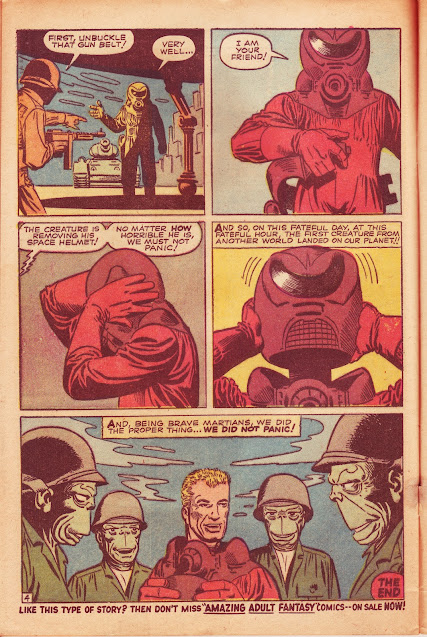 Lee singled out Amazing Adult Fantasy in ads that appeared at the end of Ditko-illustrated stories in the fantasy line. AAF was a title Lee apparently had high hopes for. That comic had him working in tandem with Steve Ditko, spotlighting his individualistic style. Alas, AAF failed to sell enough copies to satisfy publisher Martin Goodman, although the last issue featured a character that went on to some degree of notoriety.... 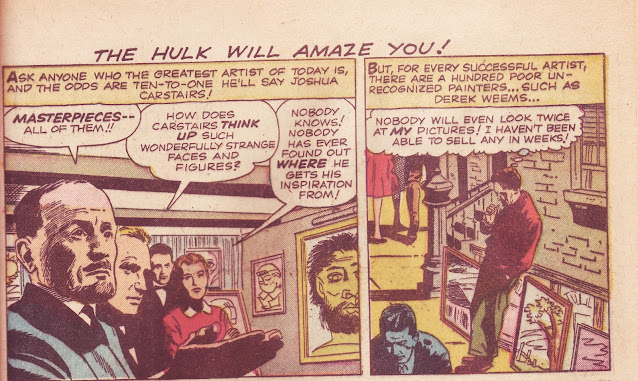 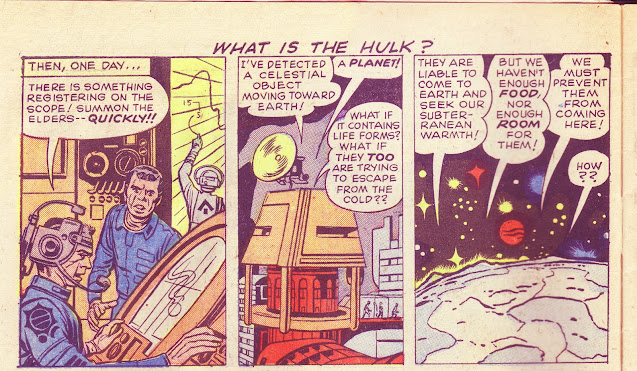 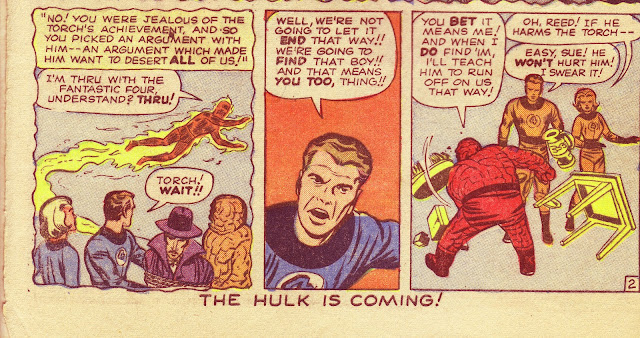 Lee scattered these ads for the new Hulk comic throughout his fantasy line. The first two examples are from Strange Tales # 97, June 1962. The last one is from Fantastic Four # 4, May 1962. It's likely that the crudely lettered ones are by Lee himself. The copy that appeared in FF # 3 is by Artie Simek. Sol Brodsky and Flo Steinberg were the extent of Marvel's office staff at this point, so anyone who walked in the door usually pitched in at one time or another. 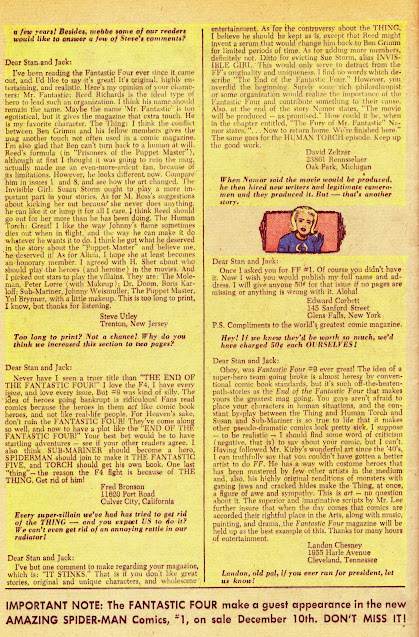 Lee promoted Amazing Spider-Man # 1 in the letters section of Fantastic Four #12 (March 1963). In the hope of encouraging readers to give Spider-Man a try Lee had the FF make an appearance in that issue. Lee was slowly building a line where characters interacted; not only did the Hulk appear in that selfsame issue of the FF, but in his teen/humor titles, Patsy and Hedy would meet Millie the Model or Linda Carter, Student Nurse. Lee's marketing skills inspired brand recognition - and under one guiding hand it was a success. 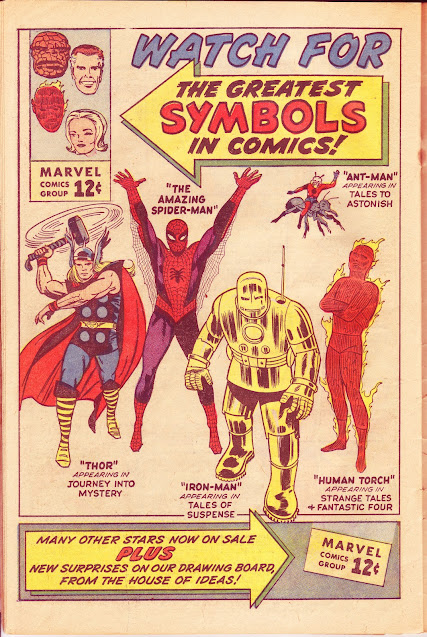 "The Greatest SYMBOLS in Comics" (I always hear a drumroll after I read that line!.). An early Marvel house ad focusing on the superhero features that were growing in both fan interest and, more importantly, sales. Pencils  by Kirby; inks by Sol Brodsky; lettering by Artie Simek and colors almost certainly by Stan Goldberg. The Spider-Man figure appears to be penciled by Kirby and inked by Ditko, similar to - but not the same figure - as his image on the cover of Amazing # 1.

By the time the above ad appeared in the May 1963 issue of Fantastic Four #14 Lee was hitting his stride. The corner box was a brilliant addition thanks to the always inventive Steve Ditko, who posited that the characters face could by easily identified on newsstand racks that often obscured most of the cover, since the upper left hand space would be noticed. This was applied throughout the line, including the western, romance and teens titles, so publisher Goodman must have approved of the idea as well. Lee now had a company Logo (Marvel Comics Group, a recycled name originally used from time-to-time in 1950's ads); and a distinctive slogan: "The House of Ideas!" Super-heroes were rapidly becoming an essential part of Marvel's line-up and Lee promoted them with authority. 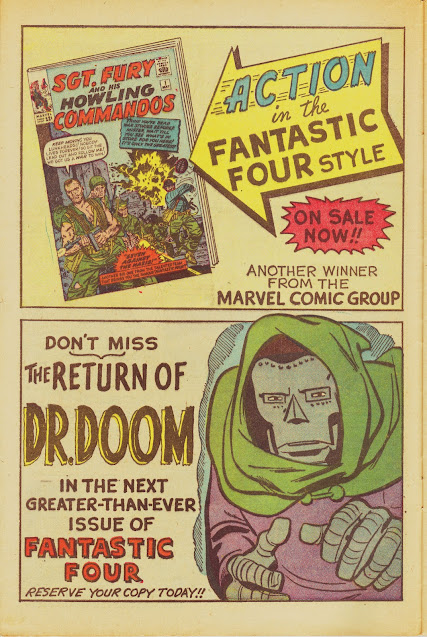 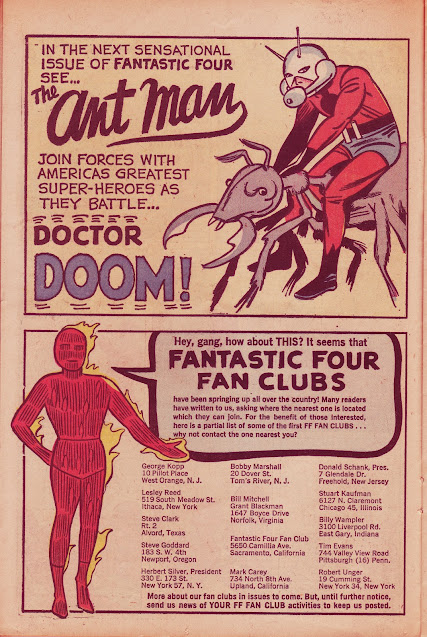 we'll never know if Lee was two pages short in Fantastic Four #15 (June 1963), and needed to fill-up space, or deliberately used those pages to promote the debut of Sgt. Fury; the next issue AND the Fantastic Four Fan Clubs! Note that Sgt. Fury is promoted as: "In the Fantastic Four style." At this point Lee was aware of Dr. Doom's popularity with fans, and his use of Ant-Man was an attempt to raise awareness (and sales) on the little guy appearing in Tales To Astonish. The Dr. Doom figure, as well as the Torch (who looks very awkward) may be swipes by Sol Brodsky, although Ant-Man may be penciled by Kirby and inked by Brodsky. 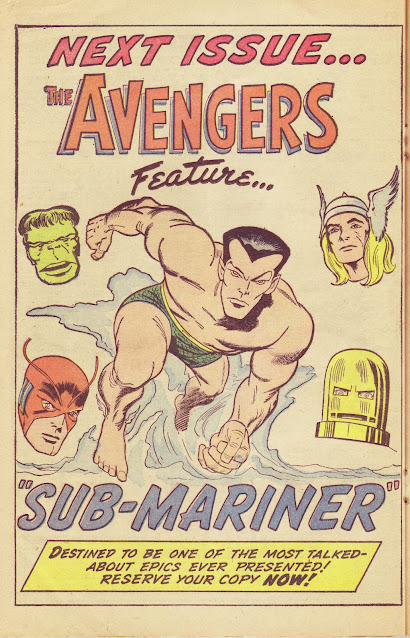 Finally, we have a coming attraction page that appeared in Avengers # 2, November 1963. Bill Everett's creation, Namor, the Sub-Mariner, was a popular character who dated back to Timely's first comic book title, Marvel Comics. After years of being relegated to the dust bin of distant memories, Lee and Kirby revived Namor and made him a recurring threat to the Fantastic Four. He soon rampaged throughout the Marvel line, taking on The Avengers. the Human Torch (in his solo feature in Strange Tales, echoing the battles Sub-Mariner had with the original, android Torch in the 1940s), X-Men and Daredevil. In 1965 Namor's popularity led to a feature role in Tales to Astonish, replacing Giant-Man. Early on, though, Sub-Mariner was a fascinating character whose appearances were often talked-about in fan circles. Jack Kirby pencils; Sol Brodsky inks; Artie Simek lettering.

Stan Lee's promotional skills continued to improve in the years ahead. The house ads, combined with letters pages, Bullpen Bulletins and the MMMS fan club formed an identity for Marvel - a fresh face among their conservative competition. Coming soon will be a look at some of the MMMS ads, including one written and drawn by Marie Severin which was noticed by Publisher Martin Goodman, leading to her obtaining penciling work at Marvel.
Posted by Nick Caputo at 10:19 PM

It's interesting to note in that ad from Hulk #1 that the logo design of FF and AAF was one and the same. ('Borrowed' from The Twilight Zone.) Something I knew years ago, but you wouldn't have thought Marvel would draw attention to it by having them on the same page.

I'm not convinced that Spider-Man figure is pencilled by Kirby, Nick. First of all, the figure is too tall in relation to those around him - suggesting being added later - and his feet are too small in relation to the rest of him in comparison with the other figures. Not saying it definitely isn't - just not persuaded that it is.

I'm certainly not positive myself, although Kirby had trouble with proportions from time to time. Kirby had a lot of work in this period and likely batted out house ads while he was in the office. Still, Brodsky may have had a hand in that figure.

Having said that, the more I look at the arms, the more they look like Kirby arms, although if Ditko inked the figure he'd have made a better job of the hands. I think the Thor figure was probably moved down to accommodate the corner box, which has resulted in Thor and Spidey seeming out of proportion to each other, which probably wasn't the case (or not as noticable) to begin with.

It's definitely a tricky one. I wonder if the Spidey figure is a 'cut and paste' from another source, stuck over Kirby's original figure? (Which may not have been Spider-Man.)

I'm going to have to look that illo over again. It certainly could be a paste job, with alterations by Brodsky, but it could just have easily been rushed out by Kirby and Ditko. I love dissecting this stuff and am glad others enjoy it as well. It's certanly "minute" enough!