Indexing comics for the GCD always turns up some interesting discoveries. While I was adding credits to Nick Fury, Agent of Shield I happened to check the interior to # 10, credited on the splash page to Frank Springer as artist. Over the years I've learned that published credits are not always correct. The credits are lettered in before the comic is inked, so there are instances where the inker who was originally intended to do the job had to bow out at the last moment, or was scheduled on another book that had a deadline. Mark Evanier has noted a number of these instances in his columns, but there are times other information is missing. There may be only one letterer credited, with pages completed by someone else. Occasionally another artist fills in on a few pages, or completes the book. And there are odd instances when only a few panels are done by someone else; perhaps changing a scene for story purposes. Often the original artist was not available to make changes, so a staffer made the correction. In the case of the SHIELD story it appears there was another reason. 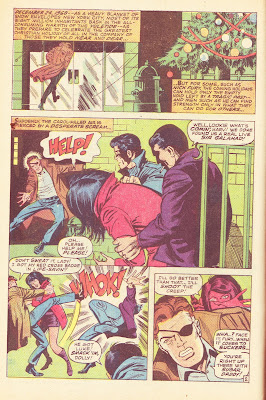 On page two of the story, panel one is clearly drawn by Frank Springer (the credited artist), who also drew the splash page. Springer's more naturalistic figures are replaced by work more closely adhering to Jack Kirby's style, with broader and more exaggerated characters. The lettering also changes in panels 2-4. Artie Simek's simple, distinctive style is replaced by a less precise look, the work of staffer Morrie Kuramoto, who was usually called on to do correction work. In panel 4 another letterer takes over, Jean Izzo, the daughter of Artie Simek, who also lettered for Marvel. It's worth noting that Johnny Craig, credited as inker on the splash, also inked the Barry Smith pages. Since the inker is one of the last in the production line, these pages were likely pasted in and included with Craig's other pages. 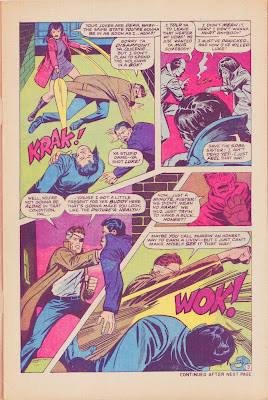 Page 3 is a complete Smith page, inked by Craig and lettered by Izzo with corrections by Kuramoto. One can see the Kirby-style dynamism that is not part of Springer's work. In fact, Springer was attempting to follow Steranko in panel arrangement and style more than anyone else. Aside from the jagged panels, Smith is copying Kirby more than Steranko on these pages. 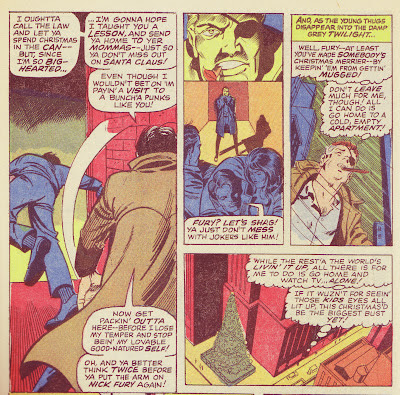 Page 4 features Smith art only on the first two panels (or three panels if you include Fury's face as a separate  panel); with perhaps John Romita touching up some figures in panel one. We then segue to the section we left off, with Fury walking through the streets of New York. Springer returns, as does Simek's lettering.

They go on to mention his work on the current X-Men and an upcoming issue of SHIELD. Smith did draw a full issue of SHIELD only two issues later. but was this his first work for Marvel, or were these pages produced later than the X-Men story? Judging from those few pages, I suspect they were drawn after the X-Men. They are certainly crude, but look a bit more confident in presentation. Were these pages a test to see if he could draw SHIELD on a regular basis? Were they purposely inserted into the Springer drawn story?

I went to one of the sources around at the time. Roy Thomas had this to say:

"Afraid I don't recall anything about why Barry would have been called on to draw a couple of pages' worth of that story... but it certainly wouldn't have been just to 'test' him.  It must be that, for whatever reason, Stan (and he would definitely have been the only person to make that decision at that time) must not have liked Springer's depiction of action and tried Barry out on jazzing it up."

I opined that perhaps the two and a half "missing" Springer pages had Fury walking through the streets of Manhattan, lost in thought. When Springer's art resumes, Fury is still outside, so the lack of action may be a possibility. I'l take another look at the later pages to see when any action takes place.

It's an interesting mystery, and a little known footnote to the early work of Barry Smith, who would go on to make a name for himself illustrating the adventures of Conan the Barbarian, where his artwork grew into a lush, detailed style that gained deserved attention. Still, his early work had a sense of enthusiasm that translated to the printed page, something that Stan Lee and Roy Thomas recognized from the start.

To view some of Barry Smith's earliest work. pin-ups published in the British weeklies, go to Kid Robson's site on my blog list.  You won't be disappointed!

An example of what you're talking about, Nick, is in FF Annual #5, where Joe Sinnott is credited as inking the tale, but it was actually inked by Frank Giacoia. (Although I'm sure you knew that already.)

I added a note for folks to go to your blog and enjoy the wonderful, rarely seen early work of Barry Smith. I certainly have enjoyed seeing it!

Thanks, Nick. I plan on giving yours and Barry's sites a plug quite soon.

This is just another great post, Nick. SHIELD got hard for me to read after Steranko left. Springer tried to imitate him and couldn't and you had stories like this where the storytelling was erratic. No wonder they killed Fury off in the last issue.

Now I have to proof I am not Mr. Machine in order to post

Well, of COURSE it's Smith's work! So obvious. NOW! I look at it here and its obvious but I guess since the credits told me it was Springer, I just never entertained that it might not be so!

Unlike many Marvel mysteries where those involved are long gone or the whole thing is left to the notorious memory of Stan, Barry is still alive and so is Gary Friedrich. Roy Thomas, even. Perhaps someone can reach out to them and find out the whys and wherefores of this one.

I emailed Roy and will report/update any new info here.

Mr. Steranko was a tough act to follow and it looked like Springer was instucted to mimic Steranko as much as possible. It didn't fool anyone. I recall that a fanzine (perhaps The Comic Reader) mentioed that Neal Adams might take over the strip. That would have been interesting.

Springe was a fine artist that was better at more subdued work. I recall that around this same time he was doing editorial cartoons for the New York Daily News. He used a distintive signature. Also, the Eisneresque splash page of Nick Fury # 10 was quite attractive.

One of the blogs I frequent recently had a post about the Fury story in Strange Tales #135.

I was looking at the art - I haven't looked at it for many years - and I thought of your post about Smith art on a story credited to Springer because #135 is credited to Dick Ayers and I don't think a lot of it it looks like Ayers.

I was thinking Giacoia for some of it. (He inked the cover.) And I see Coletta in a lot of the faces.

Have you ever looked at this?

I'll take another look at the story, but I believe that was Ayers inking. There were some alterations in the art though, particularly Tony Stark's face, which was redrawn throughout, possibly by Sol Brodsky or Stan Goldberg. Either Kirby forgot to draw Stark, or Lee decided to use him in the story at the last minute.

Hey, Nick, thanks for taking the time to look at #135 just to satisfy my curiousity.

After I posted the above, I looked at Strange Tales #135 again. I a now wondering if the time period threw me off. When I think of Dick Ayers inking Kirby, I think of all those stories in 1962 and 1963, in F.F. and the Torch series in Strange Tales.

They have a very distinct look that ST #135 doesn't have, IMO.

But #135 is two years later, so maybe Ayers' style has changed a little. He hasn't inked Kirby a while, or if he had, I can't think of it.

Still, I'm not sure I'm wrong.

Anyway, thanks for your time!

Ayers was inking other artists pencils a little less by this point, so his style may look a little different. I haven't had a chance to look the issue over, but will soon. I may even do a post on the alterations to Stark's face.