This is an expansion and revision of an article that originally appeared in Ditkomania # 73, June 2009.


Just four months after Spider-Man’s debut Steve Ditko created a new hero, who, in many respects, was more offbeat than his teenage adventurer. Nestled in the back pages of Strange Tales, which headlined the "Human Torch” feature, Dr. Strange made his debut. Under the supervision of editor Stan Lee and artist/collaborator Jack Kirby (with assistance from Larry Lieber, who scripted many early stories) the Marvel Comics Group published a steady stream of superheroes in the early 1960s. In that period Steve Ditko continued to draw five page fantasy fillers in the back of the anthology titles. After four years of working on these stories perhaps it was time for a change* . In his essay “He Giveth and He Taketh Away” (The Avenging Mind, Robin Snyder, 2007) Ditko stated:

"On my own, I brought in to Lee a five page, penciled story with a panel/page script of my idea of a new, different kind of character for variety in Marvel comics.”

Stan Lee made his own statement two months before the feature began. His letter appeared in The Comic Reader # 16 (February 1963), a popular early fanzine, and is in line with Ditko’s later recollections.


"Well, we have a new character in the works for STRANGE TALES. Just a 5 page filler named Dr. Strange. Steve Ditko is gonna draw him. It has sort of a black magic theme. The first story is nothing great, but perhaps we can make something of him. ‘Twas Steve’s idea, I figured we’d give the new feature a chance, although again, we had to rush the first one out too much. Little sidelight. Originally, we decided to call him Mr. Strange, but thought the “Mr.” was a bit too similar to Mr. Fantastic—now, however, I remember a villain called Dr. Strange just recently in one of our mags. I hope it won’t be too confusing! Oh, well…”

For those unearthing the history of comics this is an important document; one of the earliest records of Lee discussing a specific series and the first known example of Lee describing the gestation of a strip and crediting Ditko with the initial concept.

Ditko takes exception to Lee’s categorizing the story as “nothing great” and the comment “we can make something of him." Does Ditko have a legitimate complaint? An examination of the first story might be revealing.

Strange Tales # 110 (July 1963), introduces “Dr. Strange, Master of Black Magic!” (the sub-title only appeared on the splash page of the first four stories before it vanished; replaced by the phrase "Master of the Mystic Arts" in Strange Tales # 120, perhaps due to Comics Code Authority concerns). Ditko opens with an image of the title character; dark haired, Asian in appearance and garbed in a tunic bearing a symbol. He completes the outfit with an amulet, high collar, gloves and sash. Lee's copy is properly somber, informing the reader that Dr. Strange is a new series and different from others of its kind. The three panels that begin the story exemplify Ditko's storytelling acumen; the point of view has the reader peering inside a window, observing a restless and disturbed man in his bedroom. The use of rain creates an appropriately gloomy and tense mood. 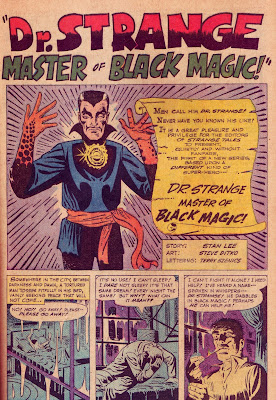 Page two opens with the man entering the abode of Dr. Strange, requesting his help. The caption tells us we are in Greenwich Village, a specific area in New York City notorious for bohemian lifestyles. This was likely Stan Lee's addition, based on his earlier use of real locations in Marvel’s stories (The Fantastic Four resided in New York City; Peter Parker in Forest Hills, Queens). The man describes his recurring nightmare to Dr. Strange, who matter-of-factly states he will enter his dream. We next see Strange going into a trance as his astral form leaves his body and takes off into the night.

Ditko establishes both the oddness of the character and his unique powers in this four panel sequence. Clearly a more cerebral hero than Thor or The Hulk!

On page three Dr. Strange, in his spirit form, travels to Asia, seeking advice from an aged mentor who he calls “the Master” (in his third appearance he would be rechristened "The Ancient One"). 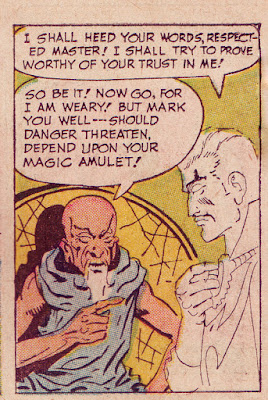 Dr. Strange's mentor represents wisdom and knowledge, passing on his abilities to the next generation.

Dr. Strange returns to the troubled man and, leaving his physical body once again, enters his dream. There he encounters a cloaked and chained figure floating in the void. 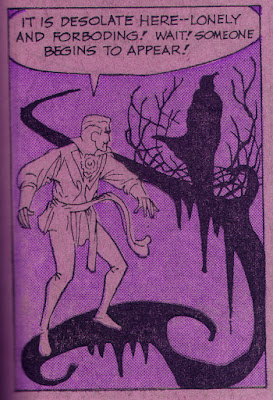 From the very beginning Ditko began to establish visual signatures in Dr. Strange.


On the fourth page Dr. Strange confronts a shadowy figure on a horse who he recognizes as Nightmare, “my ancient foe." This creates a sense of history and background for the character. 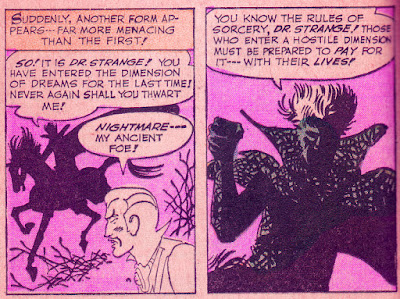 As if the good doctor didn't have enough problems, his vulnerable physical form is threatened in the real world. As Nightmare gloats, Dr. Strange contacts his mentor.

On the final page, Dr. Strange is protected by his amulet, which opens into a mystic eye, mesmerizing the attacker. Dr. Strange escapes the Dream Dimension and returns to his corporeal form. There he discovers the truth about the man he was attempting to aid. 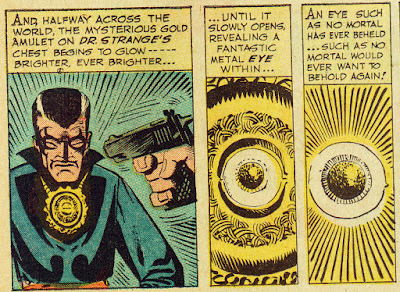 Dr. Strange's amulet, opening into a mystical "all-seeing" eye. It was an eerie visual; a symbolic light shining upon darkness and evil, one that Ditko would play with throughout his career.

Ditko introduces many elements that will be expanded upon on in the months ahead. While the splash employs four panels for a more dramatic opening, Ditko used space economically on pages 2-5; aware of page restrictions he filled each page with nine or ten panel grids. Ditko introduces the hero, his mentor, a protagonist and gives the readers a taste of the hero’s powers: astral projection and the use of a mystic amulet.

What are Stan Lee’s contributions? Lee provided strong, dramatic dialogue, adding atmosphere to the characters and situations. In his capacity as editor, Lee wisely gave Ditko the freedom to experiment; in an unyielding corporate environment he would undoubtedly have faced stronger opposition. Lee had a keen sense of how best to utilize talent and he did not hold Ditko back. Perhaps Lee felt the conclusion was weak and Dr. Strange needed a more dramatic springboard to showcase his abilities.

Ditko manages to pack more into five pages than many of his peers with four times that length at their disposal. Lee may have wanted more action but Ditko’s introductory tale sets the stage for future developments.

The story ends with Dr. Strange beckoning the reader to join him in future adventures. I hope you join me next time as I continue to explore the early Dr. Strange stories.

For those of you who would like to read these stories in unexpurgated form (and aren't independently wealthy) Marvel has recently collected every Ditko Dr. Strange story in hardcover. It's well worth investing in: https://www.amazon.com/Doctor-Strange-Omnibus-Vol-1/dp/0785199241/ref=sr_1_1?ie=UTF8&qid=1477603050&sr=8-1&keywords=dr.+strange+Ditko+omnibus

* Ditko’s last back up stories appeared in Oct 1963 dated comics, around the time of Strange Tales # 115. As enthusiasm for superhero material increased, Lee expanded the page count on all his anthology headliners, with only a single five page thriller (written and drawn by Larry Lieber) tenaciously holding on to the closing pages.

Nick,
Has it really been seven years since this article appeared in Ditkomania? Doesn't seem possible. Anyway, this piece definitely worth another look, what with the Doctor Strange movie due for release in a few days.
The Diyko five pagers were always imaginative of concept but short on characterization, and this inaugural appearance of the Master of the Mystic Arts was no exception. But, man, what it lacked in character development it more than made up for with an amazing breadth and depth of plot! When compared to the entire Ditko run on Dr. Strange, this first outing feels a little flat, but as an introduction, and as a stand-alone story, it does everything it needs to -- it entertains and makes the reader hungry for more. And it wouldn't be long before Stan Lee's dialog would bring individuality and palpable humanity to the ever growing cast of characters.
The Dr. Strange series is just one of the many, many examples that prove that the 1960s was the real Golden Age of comics...

It's an amazingly rich story for only five pages. Ditko was a master of clearly and economically assembling the details of a story. There is no ambiguity of plot or waste of space, even in a bizarre series like this. Visually it is as masterfully unique as anything Marvel ever published.

Amazingly, just a couple of days ago (30th), I was invited to write a guest post for another blog about Dr. Strange and Dr. Droom, which I submitted later that night (or the early hours of the 31st). You'll no doubt be seeing it soon, Nick, as the blog is in your blog-list. Personally, I've always felt that Ditko's Strange was probably subconsciously inspired by Lee & Kirby's Droom (which, as you mention, Ditko inked the origin of), as the characters' origins are pretty similar. I touch on the 'who created what' controversy, so it'll be interesting to read your views should you choose to comment when the post is published.

Did you buy the Omnibus? It's superb.

Yes, the original article was published all those years ago. I think I've improved it a bit this time out. I agree that the story does all it needs to, especially as an introduction.

Ditko was always able to pack a lot into a story and he did so on this first Dr. Strange.

I look forward to reading your take on the two characters. I'll discuss Droom a little more in the next installment, which looks at Dr. Stranges's origin and more of Ditko's (and Lee's) efforts in the early days of the master of the mystic arts.

Good review. Where was the article by Ditko published? And where can it be purchased?

Thank you Anonymous. The Avenging Mind along with many other Ditko comics and essays can be purchased here: http://ditko.blogspot.com/p/ditko-book-in-print.html

Thanks,I will check it out. You mentioned Strange looking Asian. I heard that Ditko tried to make him look David Niven for awhile. Do you know anything about that?

Ditko has never discussed using anyone's likeness for Dr. Strange, but I'll discuss a likely contender in my next post. BTW, David Niven's likeness was an inspiration for the character of Percy Pinkerton in Sgt. Fury, as noted by artist Dick Ayers.

Nick, I always thought that Dr. Strange looked a lot like Ronald Colman from the movie Lost Horizon. I'm not saying that's who Ditko based him on, but if it was, it wouldn't surprise me.

You must have psychic powers! I'll delve into that a bit in my next post.