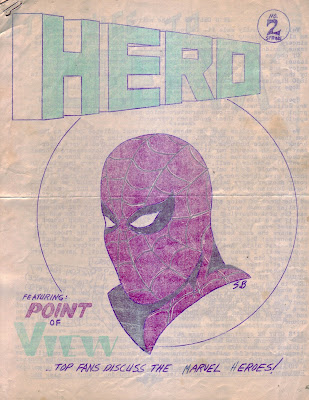 
In my previous two posts I examined Hero # 1, focusing on a few choice articles from that obscure fanzine. The second issue continues to investigate Marvel Comics' early superhero line-up as it was slowly finding its way; stumbling in places, but developing from month to month. Richard Weingroff, a knowledgeable fan, once again leads off the issue with his observations on that fascinating period.

Let's look back to a distant, and - for many of us of a certain age - dreamlike moment in time, when wide-eyed kids gazed in anticipation at the wire-bound comics waiting to be placed on sale by their local newsdealer. Alongside long-running favorites such as Action Comics, Jughead  and Uncle Scrooge they stumbled upon a few unusual surprises, including Tales of Suspense # 39 and The Amazing Spider-Man # 1. 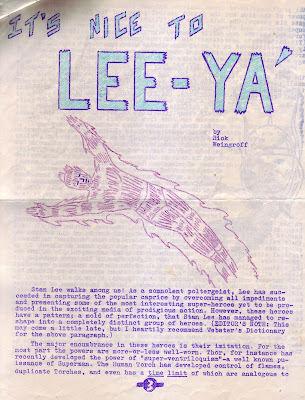 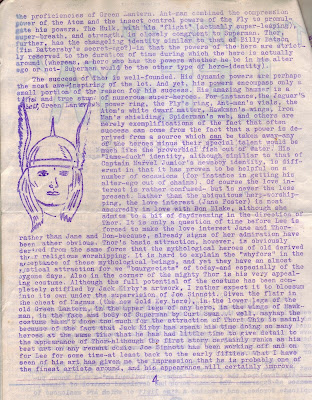 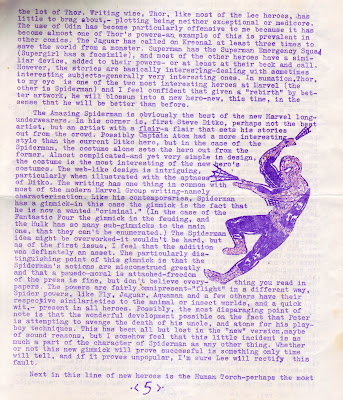 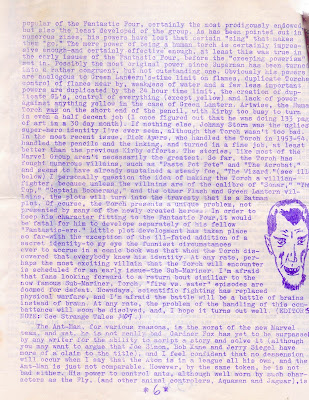 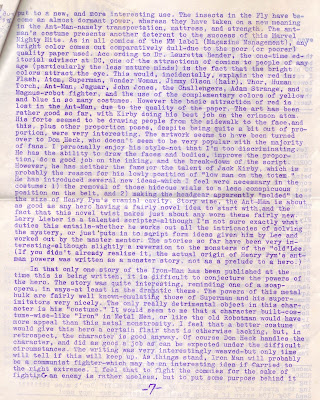 Weingroff's article focuses primarily on the more recent Marvel superheroes, with passing reference to the older veterans, Fantastic Four and The Incredible Hulk (the title had been cancelled with the sixth issue - then on sale - although Weingroff was likely not yet aware of that development). The author explains that at the time his article was written Iron-Man had just debuted (in Tales of Suspense # 39), which would line up with Marvel comics published through early February, 1963. 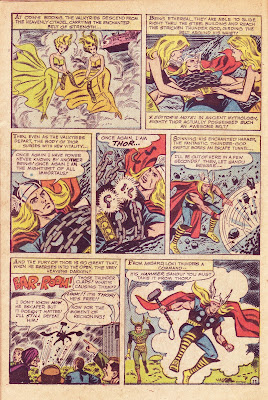 
Weingroff displayed a knowledge of comics history beyond the current period, noting Joe Sinnott's work for Atlas in the 1950s (on myriad war, western, crime and horror/mystery stories). Sinnott's art was praised over Jack Kirby's, who the author felt was overworked and often turned out a rushed job. Sinnott illustrated five Thor stories before he bowed out, becoming increasingly occupied with assignments for Treasure Chest, a long running comic book distributed exclusively to Catholic schools. Kirby was too busy initiating new titles to pencil Thor full time in the early years; Sinnott, Don Heck and even Patsy Walker artist Al Hartley awkwardly took the reigns when deadlines necessitated. Kirby returned to full-time service late in 1963 (Journey into Mystery # 101, dated February 1964) spearheading a nearly seven year run. With Stan Lee, Kirby transformed The Mighty Thor from an average hero into one of the most imaginative and popular characters in the Marvel line. 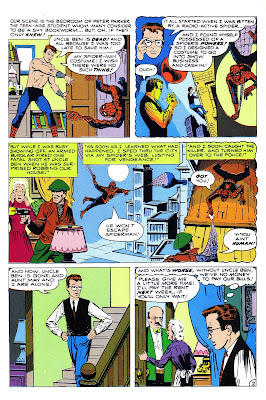 When sales figures were calculated on the final issue of Amazing Fantasy publisher Martin Goodman discovered he had a hit, and it didn't take long (eight months, to be exact) for Spider-Man to return to the stands. In an atypical move Goodman decided to throw caution to the wind and place Spider-Man in his own comic book, without the safety net of an anthology title (Tales of Suspense, Strange Tales, Journey into Mystery and Tales to Astonish could easily change content and continue with a different feature). In the recent past only the Fantastic Four and The Incredible Hulk were deemed worthy of a comic book devoted entirely to their adventures; while the Hulk initially failed, Spider-Man went on to rival, and later succeed the FF as their best selling title.

Weingroff had an acute awareness of Spider-Man's possibilities, calling him the best of the new heroes and singling out Steve Ditko (whose earlier work on Captain Atom was acknowledged) as a key component, in particular pointing out his unique costume design and distinctive style. The author appreciated Lee's characterization and understood that the heroes powers were less important than the need to flesh out story lines in future issues. I suspect he was pleased with the results. 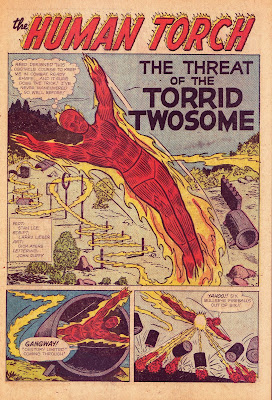 Dick Ayers replaced Jack Kirby as artist on the "Human Torch" feature beginning in Strange Tales # 106, a character he had drawn in his original incarnation a decade earlier. The weak plots and lack of character development that Weingroff pointed out continued to plague the strip; not even Lee's later addition of the Thing as co-star helped (four months later an unusual character conceived by Steve Ditko inconspicuously occupied the back pages of Strange Tales. Dr. Strange was undoubtedly superior to the lead feature). After 34 episodes the problematic Torch series was snuffed out (pardon the pun) and "Nick Fury, Agent of S.H.I.EL.D.", inspired by the popularity of secret agents from James Bond to The Man from Uncle, took its place (beginning in Strange Tales # 135, August 1965), creating a more balanced and entertaining product. 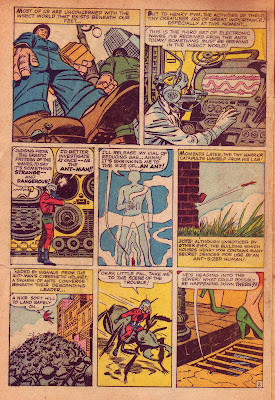 Ant-Man lived in the unnoticed world beneath out feet. His quaint tales had a certain charm, even though his early stories never reached their potential. One can only wonder what Lee and Kirby could have done with the character if they worked solo on the strip, co-plotting as they did on the FF, instead of the fully written Lieber script (from a Lee plot) and Kirby only providing pencils.

Although Weingroff found DC's Atom to be more impressive plot wise than Ant-Man, he nevertheless thought the concept of Pym controlling ants was fascinating and felt it was Kirby's best work of the period. At the time he wrote the article Don Heck had just taken over the art, with Kirby filling in from time to time. In the months to come Lee constantly tinkered with the strip; Henry Pym was soon given a female partner and his powers were reversed, turning him into a Giant-Man, but bigger isn't always better. His spot was eventually taken over by one of Timely's earliest successes, "Prince Namor, the Sub-Mariner". Giant-Man soon returned as a supporting character in The Avengers - with yet another overhaul - including a more dramatic name, Goliath, and a redesigned costume. 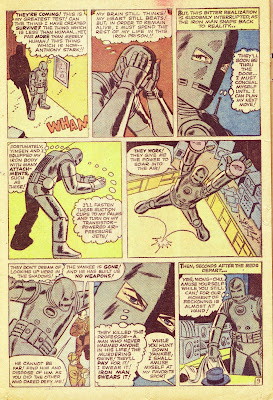 Weingroff's thoughts on Iron-Man's premiere were hopeful, although his reaction to the heroes bulky uniform was negative. As we'll see in our next segment, he was not the only fan who felt that way. Stan Lee took notice of fans grievances (and possibly weak sales figures); Iron-Man's appearance altered slightly over the next year until Steve Ditko came up with a more exciting (and definitive) design.

Weingroff's article was not without criticism; he was very much aware of similarities with past heroes, particularly when it came to their powers, but realized there was only so much one could innovate in that area. Overall he found Stan Lee's line refreshing for their differences and realized their potential. Surprisingly, Jack Kirby was not praised to the degree one would have expected; Steve Ditko, Don Heck, Dick Ayers, Joe Sinnott and Larry Lieber, however, were acknowledged in a positive manner.

Marvel's gestation period had an unpredictable, seat of the pants feeling, contrasting sharply with the structured organization of publishers such as National and Dell. Goodman's new line of heroes would elicit both praise and continued scrutiny from a growing and enthusiastic fan audience. We'll read more of their diverse views in the next installment.