Steve Ditko’s comic book career officially began in the back pages of a romance title. Daring Love # 1 was dated September-October 1953 and likely appeared on newsstands in June or July. Ditko reportedly sold his first story earlier in the year, but that would not see publication until three to four months later ("Stretching Things", Fantastic Fears # 5, dated January 1954). Other work that preceded "Stretching Things" included stories in Black Magic Vol 4, No 3, Strange Fantasy # 9 and background inks over Simon and Kirby in Captain 3-D # 1 (the primary inker, Mort Meskin, was an artist Ditko greatly admired and learned from). Three of those jobs were horror tales, a genre Ditko would become particularly suited to. 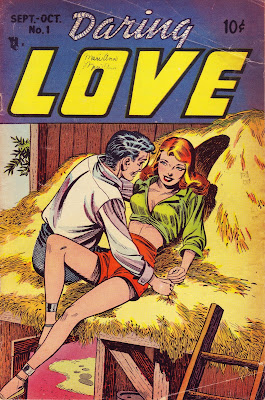 The cover to Daring Love # 1 was illustrated by someone Ditko was likely familiar with, Bernard Baily, a distinctive and versatile artist whose work dated back to the early days of comics. He drew stories for a variety of companies, often in horror-mystery genres, had his own studio for a period of time, and is noted for his co-creations "The Spectre" (with author Jerry Siegel) and "Hourman" (with writer Ken Fitch) both for National/DC.

Romance comics were extremely popular in the early 1950s era, and virtually every publisher jumped on the bandwagon. Stanley Morse had a line of material typical of the period; while the majority veered toward violent war and horror stories, he also included kid oriented material, and, of course, romance. When the Comics Code went into effect Morse moved to publishing Men's Adventure magazines, where the type of stories he favored continued unabated, competing with the likes of Martin Goodman into the 1970s.

Under the imprint Gilmore Magazines, Inc. Morse published the first issue of Daring Love. Ditko was assigned a six page story. While closely associated with mystery, horror and science fiction early in his career, Ditko also worked on western, war and humor stories. In later years he returned to those genres from time to time, particularly for Charlton Press. 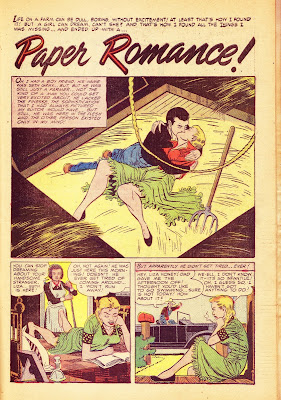 Ditko's splash page opens with an effective overhead shot. For decades Ben Oda was one of the best letterers, working on both comic books and strips. Here he adds a level of professionalism to the finished product.

“Paper Romance” (writer unknown) concerns the restlessness of a small town girl who seeks romance through a mail dating service. While clearly a journeyman effort, even in this nascent period Ditko’s composition, scenery, clothing and (in places) body language suggest a developing artist who would grow by leaps and bounds in a surprisingly short time. 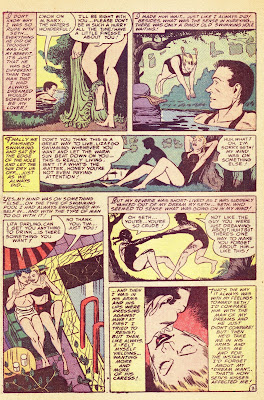 Page 2 is an example of the young artist trying hard to compose an interesting page and succeeding in places, even though he is hindered greatly by the writer, who has weighed down the page with too much copy. In panel one the girl undressing in the foreground is a workmanlike scene. Panel two has Ditko doing a good job on the girl jumping into the water, but the boy's face lacks personality or emotion (as it did in the previous panel). Panel three is a solid attempt at using horizontal space (what little was allotted Ditko). Panel four has the artist crafting another overhead scene. In panel five Ditko positions the figures of the couple in an interesting way; the use of shadowing is a little crude, but the attempt is admirable. The last panel is the least successful, the angle of the faces just doesn't work. 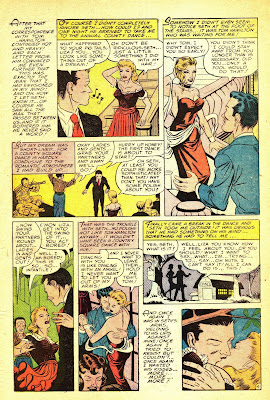 On page five Ditko was overwhelmed by massive captions and word balloons, leading to equally cluttered and clumsy art. Panels two, four and seven, which offered Ditko a little more breathing space, lacked distinction due to the stiff poses and weak faces. Ditko's layouts however are lively throughout the story, as he plays with the traditional six panel grid, using vertical and horizontal panels to varying effect. 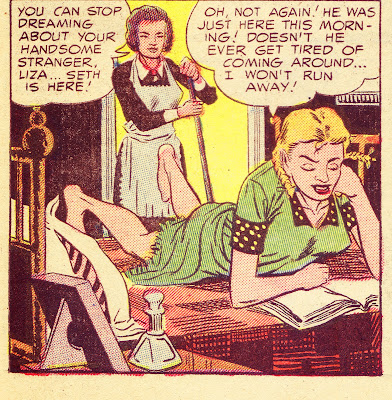 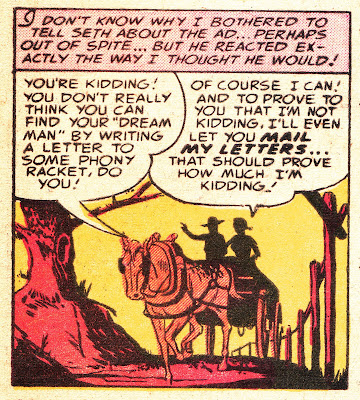 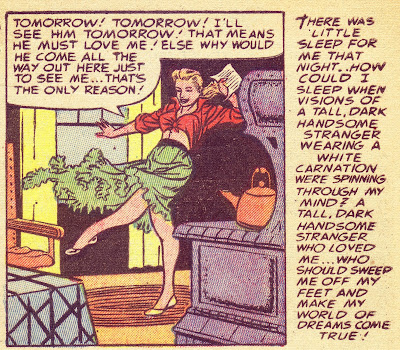 Ditko took to immediately was an understanding of “scenic design”. Like many of the greatest storytellers in the business Ditko was able to graft techniques from plays and movies that several people specialized in - director, cinematographer, costume maker - but in comics was the providence of an individual. In the above examples Ditko used settings to create personality and mood. The top panel has the girl on her bed framed by the bedpost, picture and perfume bottle in the foreground . The middle panel symmetrically places the tree and fence on either side of the carriage emphasizing a simple, rural setting. In the bottom panel the stove and teapot are literally pointing to the jubilant girl. While some elements are a bit obvious, Ditko was putting thought into his compositions and learning what did and didn't work. 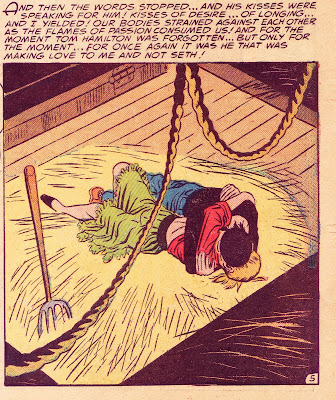 In the last panel on page 5 Ditko takes the splash page birds-eye shot and plays with it from a different angle. It is clear in this story that Will Eisner, the innovative artist/creator of the Spirit comic strip, was one of his influences. 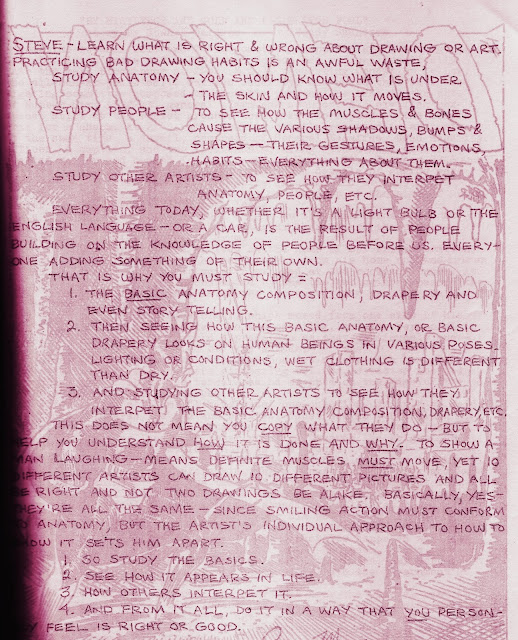 Ditko was interviewed by Gary Martin in The Comic Fan # 2 (August 1965). Above is his meticulous reply to Martin's question on what an aspiring artist needs to learn to become a professional. 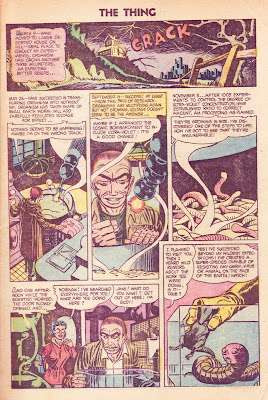 Ditko's sense of pacing, settings and characterization has strengthened considerably in the space of one year, allowing the reader's eye to easily move from panel to panel. "The Worm Turns", writer uncertain, lettering by Charlotte Jetter, The Thing # 15, July-August 1954.

"Paper Romance" is an example of Steve Ditko's developmental roots. Beginning as a young artist stumbling in places, he quickly blossomed into a professional of great confidence. In the decades that followed Steve Ditko has made innumerable contributions to the medium, paving a path as one of the most creative, recognizable and respected storytellers in the comic book field.
Posted by Nick Caputo at 7:28 PM

Funny that Ditko should be hampered by a copy-heavy writer, Nick, considering that he did the same thing himself on a lot of his self-written stories. I thought #1 of The Question had panels where the text squashed the art, and some of his later independent stuff suffered from the same problem.

Another interesting article from Nifty Nick Caputo. I really should try and follow your example on my own blog more often.

There were certainly instances where copy overwhelmed the art in some of Ditko's independent work. In comic art a balance is needed and the best work is a combination of all the elements.

Thanks again for the kind words.

I don't mind wordy pages, actually I think I prefer it that way. Thing is though, some consideration of the composition needs to occur, some judicial edits might enhance this. Page 2, panel 3 is a good example, it's quite an effective scene, nice contrast. He's getting all wordy and reflective, she's disinterested, her balloon should've been clipped to something more curt. Also that prose: being beaten by a sun might be apt in a drama played out in a desert, it's slightly incongruous when evoking a sense of gentle repose. So yeah, the pictorial element is somewhat suborned by some iffy prose, I have no objections to that style in principle though. Ditko still manages to sparkle in there, p2, panel 5, that dapple effect, it's almost surreal, the way it evokes stars at night.

Ditko's instructor in school, Jerry Robinson, once mentioned what a serious student Ditko was. That introspection often comes through in his page/panels choices.

Hi Nick! Great post. I shared it with the Sequential Crush Facebook page and my readers loved it! It was seen by over 2,000 people!!! I think it definitely points to 1.) the interest in Ditko and 2.) the interest people have in reading about artists engaged in genres other than the ones they are most famous for.

Thank you for including the Comic Fan response. Top notch advice to this day!

I'm glad that so many on your facebook page were interested in my post. As you know I quite enjoy discussing genres other than Superheroes (much as I like them). I'm constantly learning more about romance comics and still discovering many artists whose work I hadn't seen in that genre.

I love the Comic Fan interview and discussion by Ditko on storytelling.

Thanks again for the kind words.

Looking at this as the "Featured Post" tonight, I would have ben willing to bet money that this cover was by Al Feldstein... although upon reflection I realize that, in 1953, he would have scarcely had the time to freelance for anyone outside of EC.