Fifty years ago comic book stores didn’t exist. Instead, you could saunter over to the neighborhood newsstand, candy store, luncheonette or various other establishments to purchase the latest comics. If you followed any of Marvel’s output, letters pages and house ads would have announced the upcoming Annuals which appeared every spring/summer, a time chosen specifically to coincide with children being off from school. The reasoning was that they'd have a few extra quarters to spend while taking a family vacation or sitting under a tree with a coke on a lazy afternoon.

In that long ago summer of 1965 Amazing Spider-Man Annual # 2  leaped off the racks, falling into the hands and back pockets of many a youth. 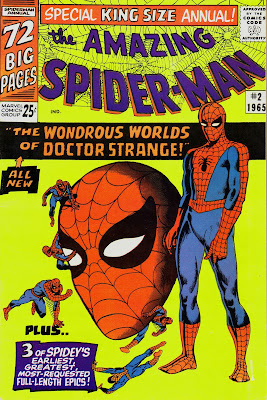 The understated simplicity of Ditko’s cover included what would become an iconic Spider-Man image; the full-figure pose was used as the corner symbol on the monthly Amazing Spider-Man title years after he was gone. The bold coloring, likely by Stan Goldberg, compliments Ditko’s images. Spider-Man’s red/blue costume contrasts perfectly with the yellow background, purple logo and red/orange/white captions and corner box. Sam Rosen’s attractive lettering completes the picture.

In “The Wondrous Worlds of Dr. Strange!” Steve Ditko brought together two of his signature characters. Although this was a Ditko plotted tale (with Stan Lee dialogue and editing) it is possible the Annual may have been discussed months in advance, when Lee and Ditko were still communicating with each other (according to Ditko sometime before Amazing Spider-Man # 25 Lee stopped talking to him. To learn more about Ditko's side of the story I urge everyone to purchase The Four Page Series # 9, which can be ordered here):

Ditko has stated that he was against using guest stars, his contention being that it undercut the effectiveness and individuality of a superhero:

“Everyone used from another hero’s story-world prevented us from focusing on, creating and developing our own unique story-world of characters and villains like Dr. Octopus, Electro, Kraven, etc. And it affected S-m’s own cast—JJJ, Betty, Flash, Aunt May—such as Johnny Storm’s (HT) relationship with Peter and his classmates, etc. All outside, other inclusions robbed us of our unique potentials.”

Ditko avoided this problem by choosing not to use any of the supporting characters (even Spider-Man fails to appear in his civilian identity of Peter Parker) setting the tale apart from the monthly continuity. Ditko explained his reasoning, speaking specifically about the Annual in one of his essays:

“A line has to be drawn for what is acceptable and not acceptable for a character. (I even had magic limits on Dr. Strange. Amazing Spider-Man Annual # 2 (1965) featuring Dr. Strange, was, as an annual should be, a special event. It does not necessarily have to connect with the monthly adventures. And Spider-Man was already long undercut with space aliens.)” 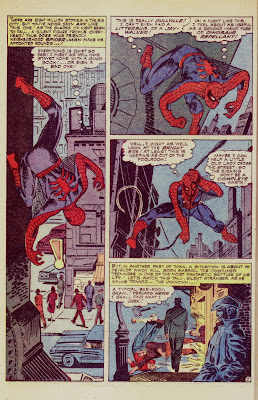 Ditko's compositional skills, cityscape and seedy characters come to life on this page. The vertical panel is particularly effective. 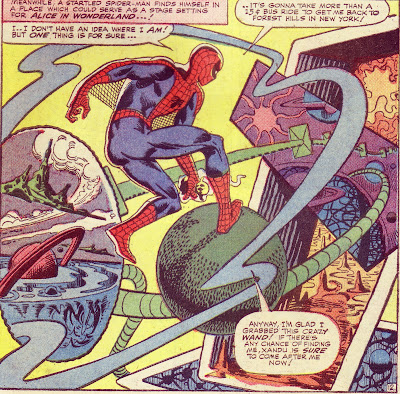 Spider-Man enters the wildly imaginative dimensions Ditko created in Dr. Strange. For you youngsters out there, there was a time you could ride a bus for 15 cents, but you had to have change - and Metro Cards didn't exist!

The plot centers on a sorcerer named Xandu, who seeks power by acquiring a magic wand, one half which is owned by Dr. Strange. Two dimwitted thugs fall under Xandu's spell and assist him in his quest (what better way to involve Spider-Man?). Despite the odd nature of the tale, Spider-Man remained in character, cracking jokes while being flung into another dimension (one of Lee’s best lines: "It's gonna take more than a 15 cent bus ride to get to Forest Hills in New York"). 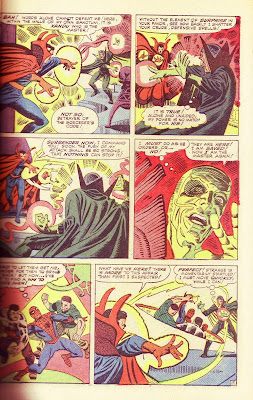 Dr. Strange discovers Spider-Man's presence during his mystic battle with Xandu in the last panel of page 15, building up the stories drama. 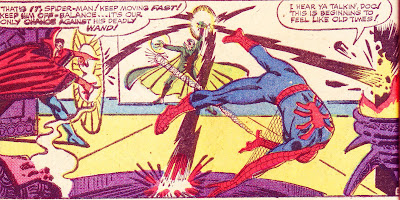 The more mature Dr. Strange leads the confrontation, with Spider-Man backing him up.

Ditko set parameters. Throughout most of the story Spider-Man and Dr. Strange were unaware of each other, fighting on different fronts. The heroes did not “meet” until the final panel of page 15 and appeared in only 13 panels together. They combined forces against Xandu in the final confrontation, the older, wiser Dr. Strange leading the fray. This would make sense following Ditko’s logic of what makes a successful team, citing Sherlock Holmes and Dr. Watson.

“The more the unequal status is perceived and valid, the better the results as a team operation” 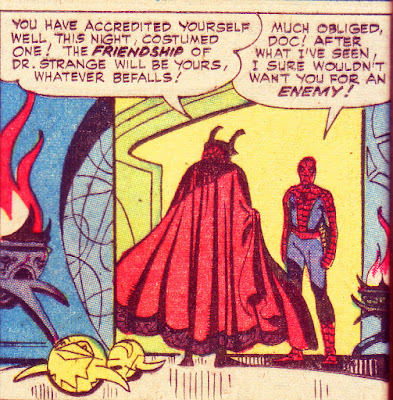 Ditko's two unique heroes have a brief conversation before going their separate ways. The lettering on the word "friendship" is not by Sam Rosen, meaning the original word was replaced. Since this blog is titled "Marvel Mysteries and Comics Minutiae" I have to ask, what could it have replaced?

Ditko juggled the discordant elements of Spider-Man and Dr. Strange in a way that retained the integrity of both strips. Mood and color (likely supplied by Stan Goldberg), detailed buildings and arcane images, all combined to unusual effect.

While not as expansive as the first Annual, where Ditko was given more pages to play with (41 as opposed to 20) this story was considerably more offbeat, and the brief interaction between Ditko’s heroes was memorable. It was the last time Ditko included a guest-star in his Spider-Man and Dr. Strange stories. 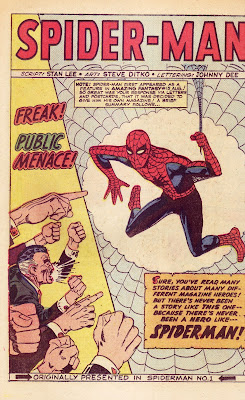 Reprint of the splash page from Amazing Spider-Man # 1, March 1963. Lettering by John D'Agostino under the pen name "Johnny Dee". D'Agostino's career included work as artist, inker and colorist. D'Agostino lettered many of Ditko's stories for Charlton in the 1960s. Ditko's expressive hands showing emotion is at the forefront of this page. 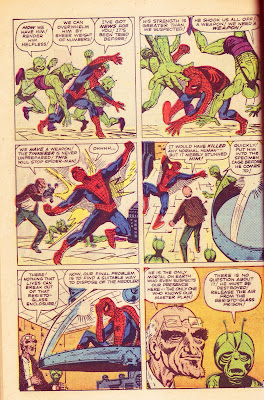 The "space aliens" Ditko referred to in the quote above was also reprinted in the Annual, originally presented in Amazing Spider-Man # 2, May 1963, "The Uncanny Threat of the Terrible Tinkerer!" Stan Lee plot and dialogue; Artie Simek letters. Although Ditko is correct that the sci-fi  elements, offshoots of Lee's Tales to Astonish and Journey into Mystery plots, are out of place in Spider-Man's world, the artist still invests energy and a quirky atmosphere to the yarn. 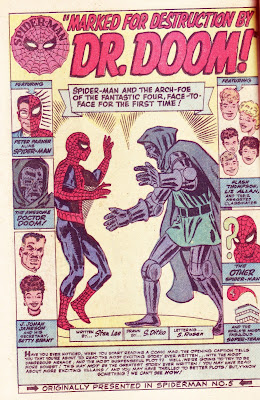 While Ditko drew an exciting splash page (and included vignettes of Spider-Man's cast) Dr. Doom was too powerful a character to "realistically" confront a teenage hero. Characteristically for Ditko, Spider-Man doesn't defeat Doom; he flees when the Fantastic Four show up. Reprinted from Amazing Spider-Man # 5, October 1963.

Amazing Spider-Man Annual # 2 had one drawback from the previous years effort; it (along with Marvel's other 1965 dated Annuals) included reprints in lieu of special features. A let-down, although to be fair a number of fans, yours truly included, did not own the original comics and greatly enjoyed seeing them. The 1964 Amazing Spider-Man Annual had 72 interior pages of all-new material (with only the inside front, inside back and back covers consisting of advertising);Annual 2 featured 70 pages of story and art (two house ads for the Marvel line and MMMS products were included). Either due to time constraints or cost cutting the opening 20 page tale was followed by reprints from Amazing Spider-Man #'s 1, 2 and  5. As good as Ditko’s earlier work is,his style grew considerably in a very short time;there is greater confidence in storytelling, composition and inking in his 1965 output.

Following in the footsteps of the first annual, the Gallery of Spider-Man’s Foes continued, including five full page pin-ups of Spider-Man’s rouges gallery up to the current period. Ditko’s mastery of pen and ink is evident in every line, and his clean, precise inking is a joy to behold. 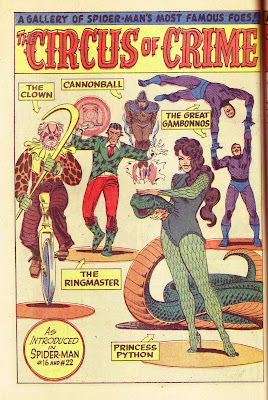 While The Ringmaster was originally a Simon and Kirby villain, dating back to Captain America Comics #5 (August 1941), revised two decades later by Lee and Kirby in The Incredible Hulk #3 (September 1962), Ditko developed and created most of the rouges gallery, including the Clown and Princess Python, one of Ditko's more attractive females. Lettering by Sam Rosen. 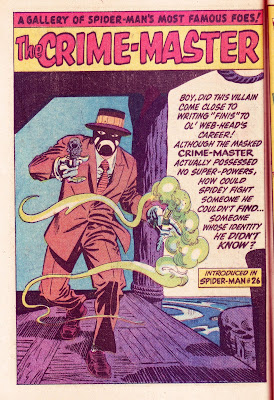 The Crime-Master was one of Ditko's non-powered criminals who fit perfectly into Spider-Man's world consisting of sinister gangsters,
threatening back alleys and lonely docks. The two-part story in Amazing Spider-Man #'s 26-27 (July-August 1965) which also featured the malevolent Green Goblin, remains a true classic. Copy by Lee; lettering by Sam Rosen.

Amazing Spider-Man Annual# 2 was the last produced by Steve Ditko. In less than a year he would quit the company, never to draw his two signature characters again. The stories Ditko produced with Stan Lee in a four year period on Spider-Man and Dr. Strange are not just a nostalgic romp; many stand out as superior work woven by a master craftsman. It is an accomplishment that stands the test of time. 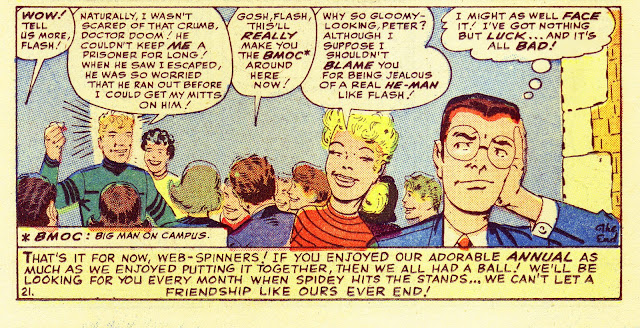 The last caption in Amazing Spider-Man Annual #2 (reprinting Amazing Spider-Man #5) included new copy likely written by Stan Lee. One aspect of Ditko's work that is often ignored is his ability to create humorous situations. Peter Parker's bemused expression was one aspect of the character's personality that brought the character to life; a refreshing change from the cardboard heroes that permeated comics in that period.