In June of 1964 the first Amazing Spider-Man Annual arrived on newsstands. For fans of the character it was a real treat, featuring an extra-long 41 page story by Stan Lee and Steve Ditko, followed by 31 pages of special features. 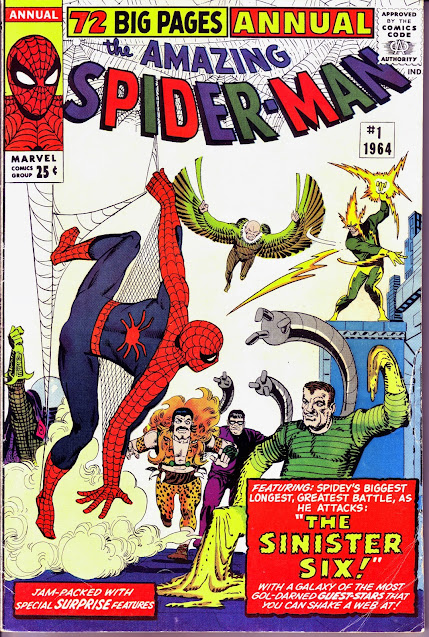 With it's multi-colored logo and simple but effective design the first Spider-Man Annual offered a world of excitement. Priced at 25 cents the comic was a bargain, featuring a total of 72 pages of interior story/art and only three pages of advertising (inside front cover, inside back cover and back cover). I noticed this while checking info for the upcoming Taschen book (check out the link below. The Yancy Street Gang: "Meticulous" Michael J. Vassallo, "Bashful" Barry Pearl and yours truly, have been involved in fact-checking, consulting, researching and writing captions for the Timely/Atlas/Marvel Age, up to the 1970's. End of promotion!)

The ad pages grew in the following year, but it's nice to read a story with no interruptions!

Steve Ditko did not like the idea of using guest-stars in Spider-Man or "Dr. Strange" - or any other hero books - feeling that they undercut the characters story world and the individuality of the main hero, who should be able to deal with problems on his own. Stan Lee thought otherwise, and used his titles to promote the entire superhero line. Guest-stars and villains from other strips appeared during the time that Lee and Ditko were plotting Spider-Man together, but once Ditko began plotting on his own (circa Amazing Spider-Man # 25) no other super-heroes or "borrowed" villains appeared. Ditko explained his thoughts in his essay "A Mini-History 1: The Green Goblin"*

"Amazing Spider-Man Annual #2 (1965) featuring Dr. Strange, was,  as an Annual should be, a special event. It does not necessarily have to connect to the monthly adventures."

While Ditko's discussion was about Spidey's second Annual, it points to the idea that he was more agreeable to add guest-stars to a special event and went along with Lee's idea to include Marvel's heroes throughout the book. What's worth exploring is how he accomplished this. 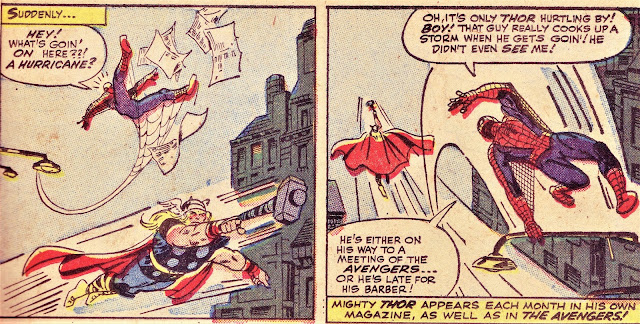 The first guest-star Spidey "meets" is Thor in a humorous two-panel sequence as he zooms past Spidey. Lee provides the humorous dialogue: "He's either on his way to a meeting with the Avengers..or he's late for his BARBER!". Lee adds a caption to every heroes appearance, informing any newcomers what title(s) the character can be found in. 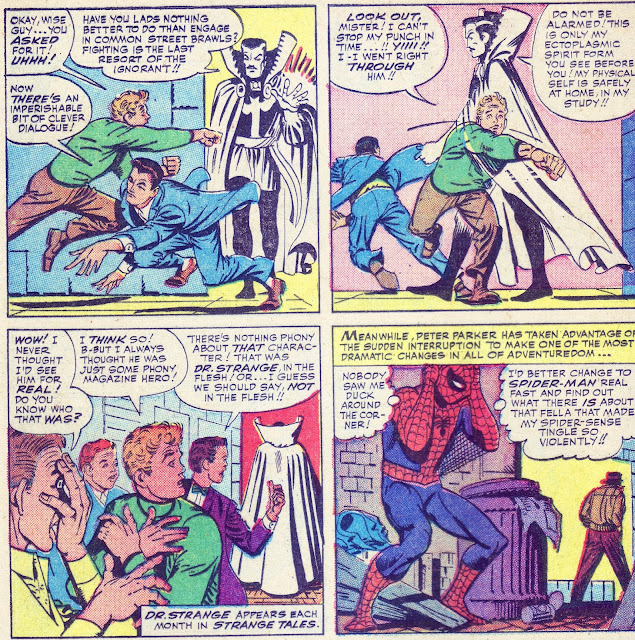 Ditko's other signature character, Dr. Strange, has a cameo strolling nonchalantly through the streets of Forest Hills while Peter is tussling with Flash Thompson! Dr. Strange is depicted in his "spirit form" (differentiated by a lack of color) but it had been previously established that he cannot be seen by ordinary humans in that guise; besides, the teenagers make no reference to his ghostly appearance. It's possible that Lee ignored or altered Ditko's original intent when writing the dialogue (Ditko wrote notes and rough dialogue for every panel/page on separate sheets of paper as a rough guide for Lee) . Perhaps Ditko had Dr. Strange casting a spell to protect himself from the kids hooliganism (see his gesture in the first panel) which allowed the boys to harmlessly pass through him. If you look at the scene and picture Doc colored normally it makes a little more sense. 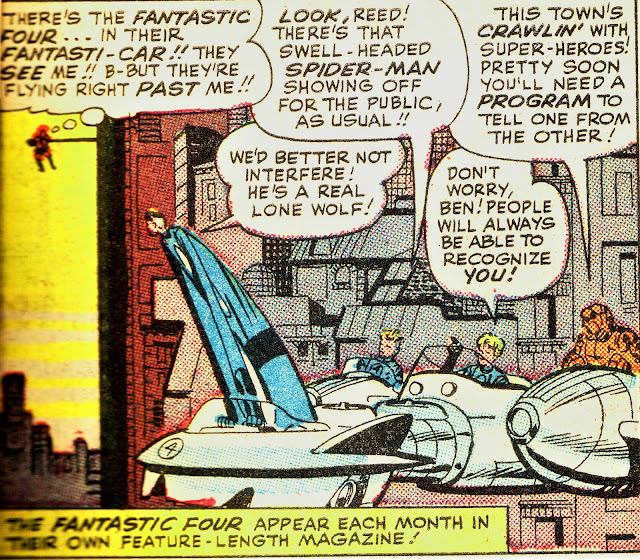 As the Fantastic Four fly around town they think Spidey is goofing around. Unknown to the FF, though, Spider-Man is suffering from the fear that he is losing his powers. After witnessing his Aunt, May Parker, grieving over a photograph of her deceased husband Peter's feelings of guilt over not saving him from a criminal's bullet resurfaces.

Lost in thought and worried about how his life will change as a normal teenager, Peter is oblivious to Giant-Man and the Wasp stopping a crime. 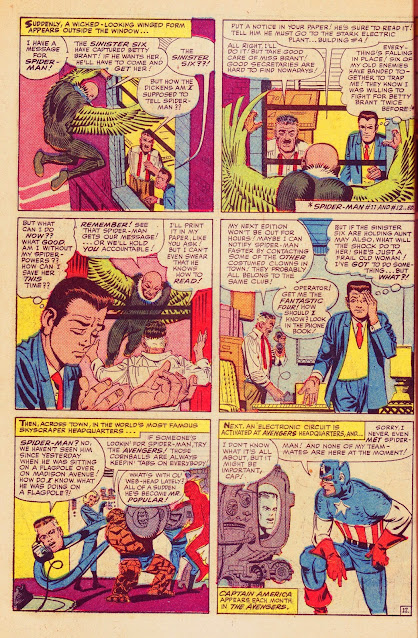 The Vulture delivers a message to Daily Bugle publisher J. Jonah Jameson, informing him that his secretary Betty Brant and Peter Parker's Aunt are hostages of "The Sinister Six", a group of Spider-Man's old foes seeking revenge. The Vulture wants Jameson to contact Spider-Man, setting him up for a trap. Jameson, of course, has no clue how to get in touch with Spider-Man and calls the Fantastic Four, who in turn contact the Avengers. Captain America answers the call and tells Reed Richards: "I never even MET Spider-Man!". Yes, there was a time Marvel's heroes didn't all know each other! 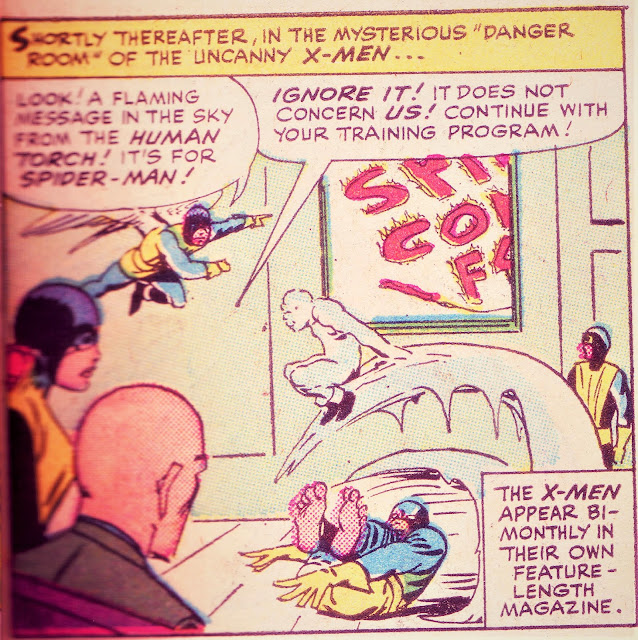 The Human Torch fashions a flaming message in the skies to no avail. Professor X, mentor of the teenage mutants the X-Men, has no time to worry about Spider-Man, telling his students to get back to work! If only more superheroes minded their own business instead of getting involved in every story-line!

Convinced that he no longer has special abilities Peter still heads out as Spider-Man in a desperate attempt to save his loved ones. Arriving at the assigned destination he encounters Electro. When his extraordinary reflexes save his life Peter realizes that his loss of powers was only psychosomatic. Surely the first time a superhero had suffered from such an illness! 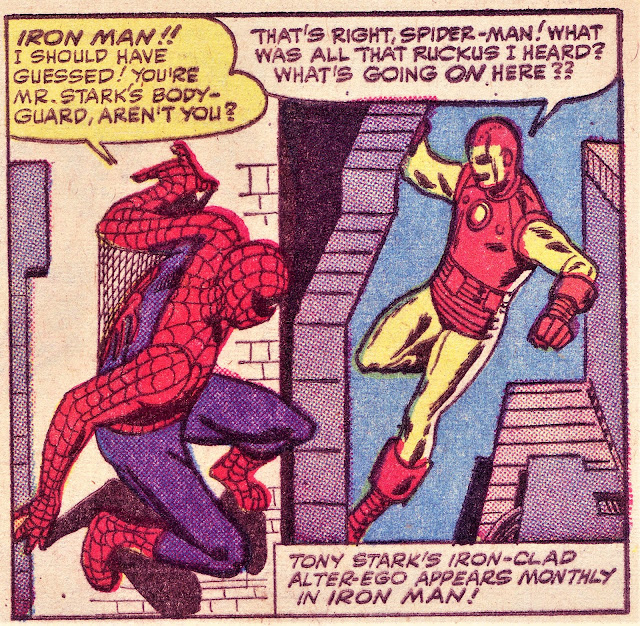 Spidey finally meets another hero in a one panel scene. Since he was fighting Electro in Tony Stark's power plant, it makes sense that his alter-ego, Iron-Man, shows up, but only AFTER Spidey's confrontation!  Since Lee was promoting each character, perhaps he deliberately left off the official titles in his captions. By this point Journey into Mystery and Tales of Suspense's cover logos had been minimized. Superheroes were clearly the main selling point so "The Power of Iron-Man" and "The Mighty Thor" were emphasized. Soon Tales to Astonish would follow suit, although Strange Tales' logo remained intact for some time. 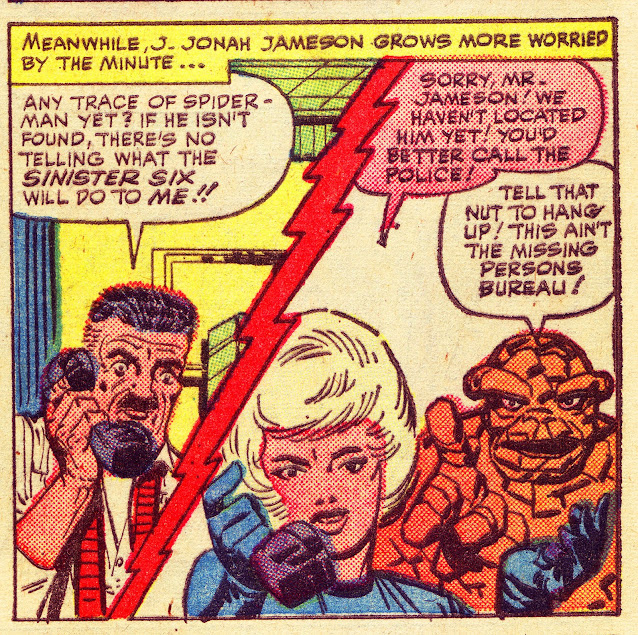 Jameson contacts the FF again, worried about his own neck, of course! 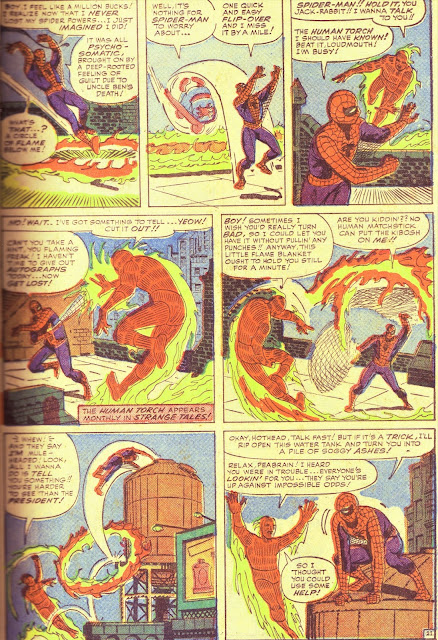 The Human Torch appeared in a number of Spider-Man's monthly adventures, but the two teenagers were often antagonistic towards each other. Spider-Man declines Johnny's offer of assistance; clearly Ditko's idea that a hero had to fight his own battles and doesn't need outside help. Ditko explained in "A Mini-History 12: Guest Stars: Heroes and Villains"**

"I also deliberately made S-M and the HT ineffective as a "team" in capturing the B (Beetle)...In yet another S-M/HT team up (#19) I had two policeman capture the Sandman."

Ditko accepted Lee's use of guest-stars on occasion, but cleverly turned the idea on its head, making them a detriment to each other, not a boon. 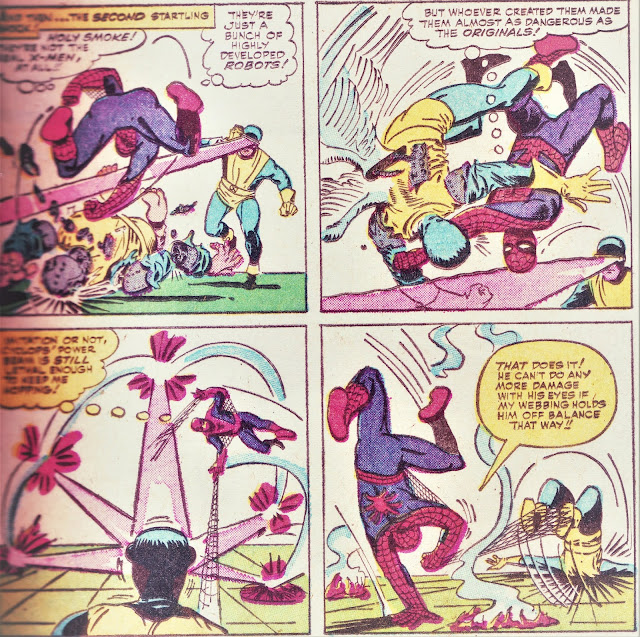 Spidey battles the X-Men...or does he? They turn out to be robots created by Mysterio. Lee gets his wish to publicize the new team (whose seventh issue was on the stands when the Annual appeared) while Ditko avoids a meeting with the real heroes. 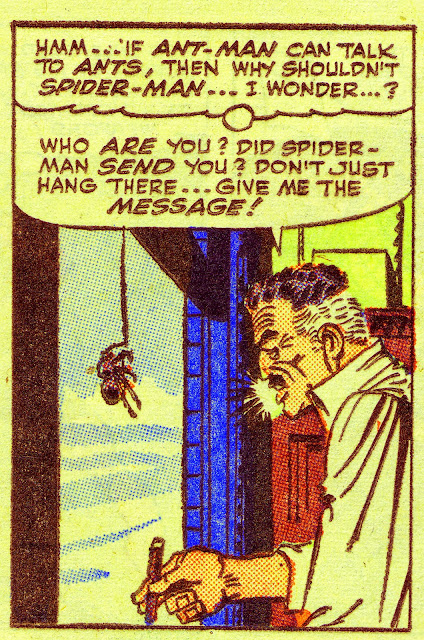 In one of the most amusing panels Jameson desperately tries to contact Spider-Man by conversing with a spider outside his window. I bet JJ was a fan of Mr. Ed! 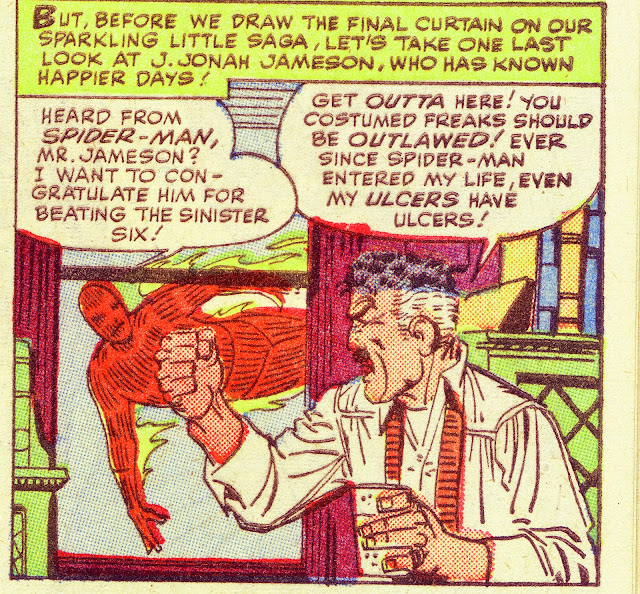 The final cameo goes to the Human Torch, who checks in with a aggravated and bombastic Jameson. Ditko included a total of 27 panels featuring guest stars in a 41 page story, most of which were "walk on" appearances. Ditko cannily followed Lee's directive in his own inventive and unique way. 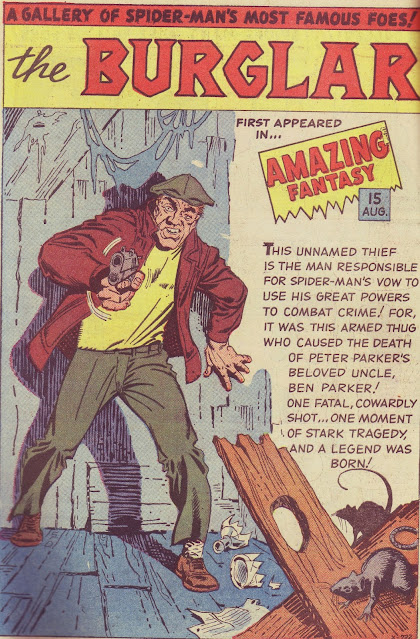 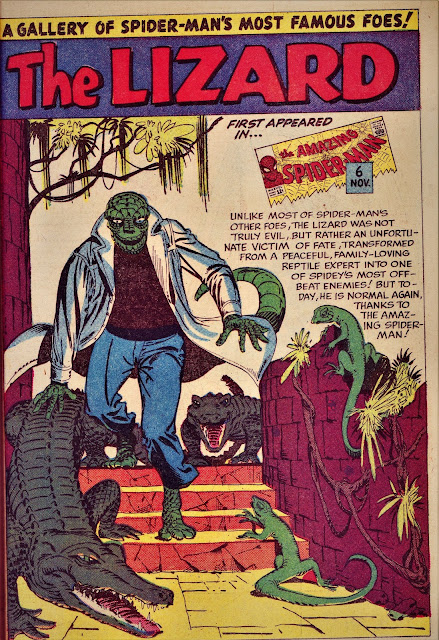 The story was immediately followed by an outstanding collection of special features that represented exactly WHY these Annuals were highly anticipated. The gallery of Spider-Man's foes included every lowlife the hero had encountered up to publication. Ditko knocked it out of the park with every meticulous illustration. I'm particularly impressed by the details such as the lurking rats and the expressive tiny lizard. Lee added details in the copy and a sense of drama and enthusiasm to the mix. 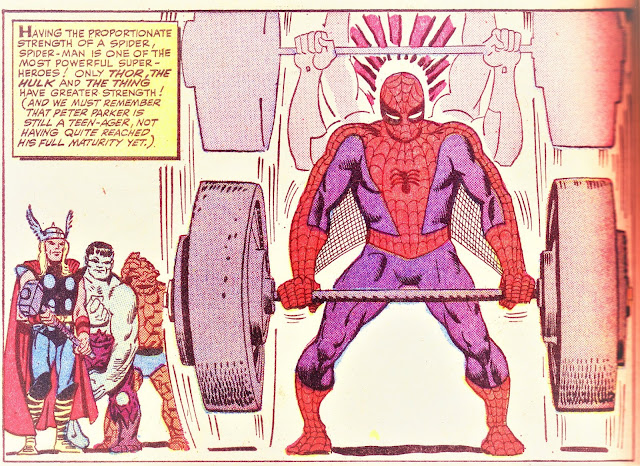 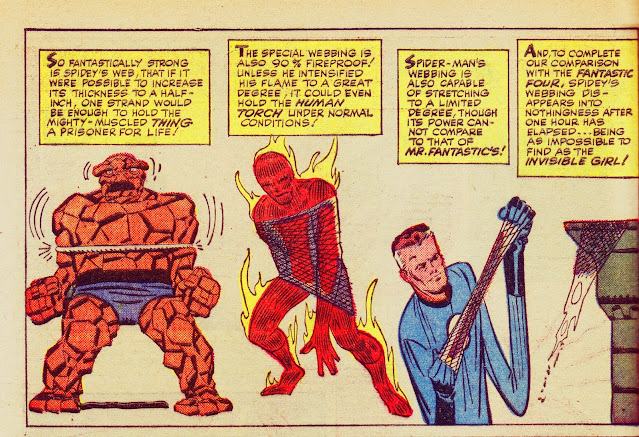 "The Secrets of Spider-Man" feature included cameos of Thor, the Hulk, the Thing, Mr. Fantastic and The Human Torch, explaining Spider-Man's strength in proportion to other heroes and the capability of his webbing. 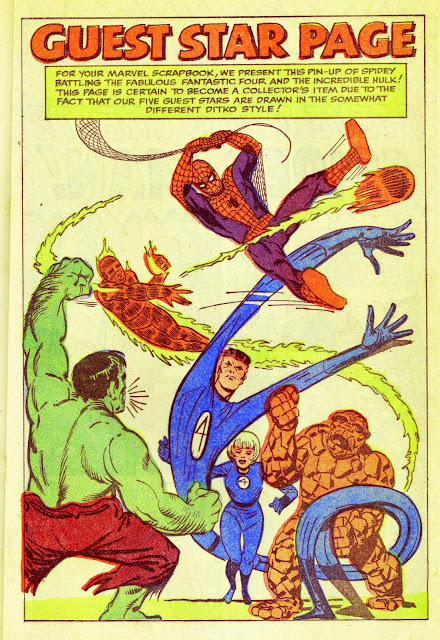 The "Guest-Star Page" includes Ditko's versions of the Hulk and the FF, described by Lee as drawn in "the somewhat different Ditko style". Some fans may not have been impressed with Ditko's interpretation of Kirby characters, but that is exactly what made each man brilliant stylists. While Ditko never quite got the hang of drawing the Thing, he did a fine job on the other members of the FF, particularly the Torch. The following month Ditko would revise the Hulk, plotting and drawing the new co-feature in Tales to Astonish for eight issues. 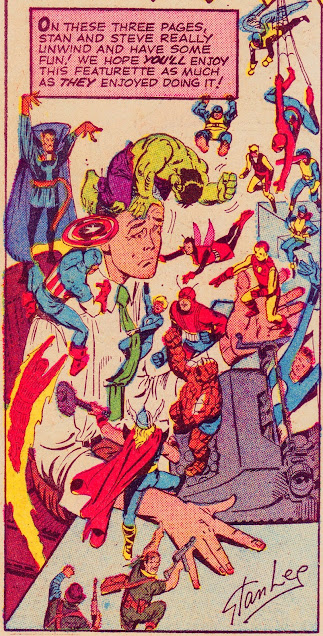 Finally, we close with this delightful image of Stan Lee being assaulted by Marvel's heroes, including Daredevil and Sgt. Fury, the only characters who didn't make it into the main story. Fury, of course, was set in World War II, and DD may have been omitted because Lee and Ditko worked on the opening story before the character was published or, as Joseph William Marek pointed out, it may simply be that Daredevil was guest-starring in that month's Amazing Spider-Man (issue #16).

While I don't totally agree with Ditko's theory that guest-stars diminish a heroes importance, his point that they interfered with the development of the lead hero and his supporting cast and ongoing sub-plots (particularly in the monthly comic book) is valid. For kids reading the comics though, it was exciting when heroes encountered each other. In the early 1960's it was a novelty and often used sparingly. As the years went by an "anything goes" mentality produced many poorly plotted stories, lacking in either characterization or new ideas. Guest-stars are all too often used as an excuse to mix characters together until they become indistinguishable. Where is the originality in that?

Back in June of 1964, though, few - if any - fans debated the merits of guest-stars. The Amazing Spider-Man Annual # 1 was purchased and appreciated for what it was: a fun, entertaining and solidly crafted comic, made special by the efforts of some extremely talented individuals. Looking back on it today, those attributes continue to stand the test of time.