Behind the Shelves: Russ Johnson and Mister Oswald

In honor of Rob Stolzer's brand-new blog spotlighting the impressive work of Russ Johnson (look for it here: https://misteroswald.com/?fbclid=IwAR1r_Tec9AcgX-60YbTXVr_6XmzXOOOaOFk_yYHu0TggivlWTa6L1co8DMU )
I've revised my tribute, which was originally posted on November 8, 2014.
There are many famous comic strips and creators that have been justly celebrated, studied and collected: Milton Caniff (Terry and the Pirates); Chester Gould (Dick Tracy); Hal Foster (Tarzan; Prince Valiant); Alex Raymond (Flash Gordon); Harold Gray (Little Orphan Annie); Charles Schulz (Peanuts) to name but a few, but one strip sits in relative obscurity despite an extraordinary sixty-two year tenure. Why? Because that comic strip was buried inside a monthly retail magazine that catered to the Hardware business. 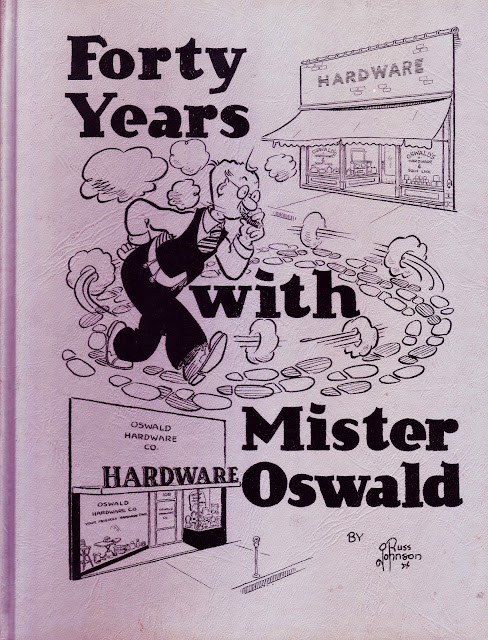 The cover to Forty Years with Mister Oswald, published in 1968 by the National Retail Hardware Association.

The story of Russ Johnson is fascinating on many levels. Johnson was not only a talented cartoonist, but a businessman who took over ownership of his father's Hardware store and ran the operation for decades. His first hand experiences as a store owner were the gist for many stories he devised. 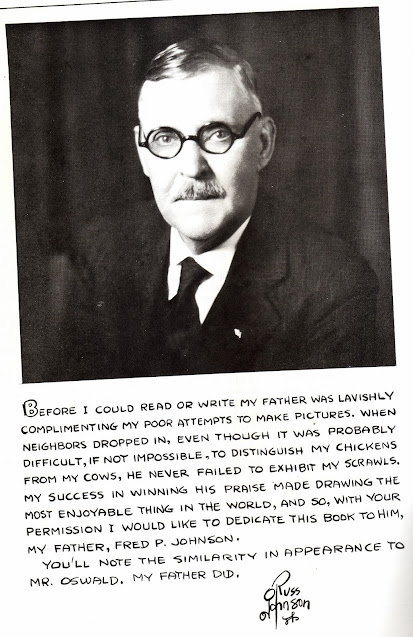 In the introduction Johnson recounts his father's encouragement over his childhood drawings and how he based the visual appearance of Mister Oswald on his father. 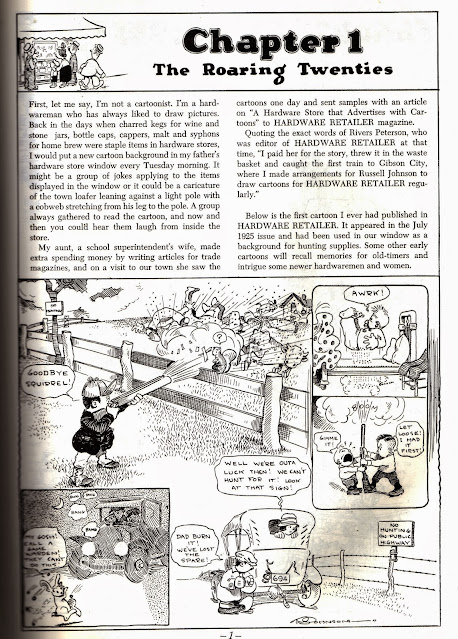 What makes Forty Years with Mister Oswald such a worthwhile read is not only the reprinted strips, ranging from its beginning in 1925 to 1968, but Johnson's own personal story. Each chapter begins with Johnson sharing his thoughts on both the comic strip and his experiences in the Hardware business - from the depression era and World War II to post-war society and beyond. 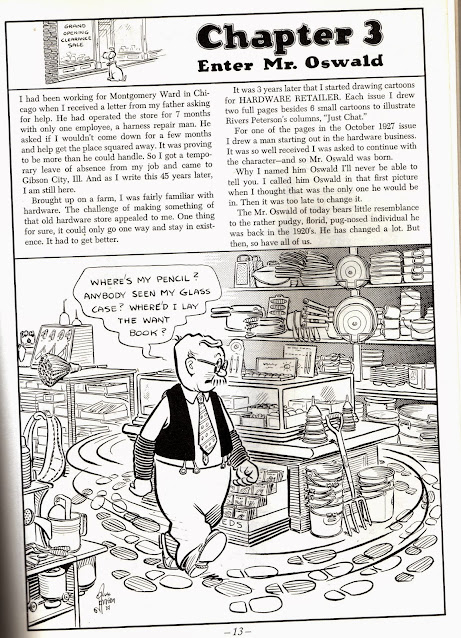 In Chapter 3 Johnson recounts his history in the hardware retail business, initially helping out his father and eventually making it a full time profession; a narrative that intermingles with his creation of Mister Oswald, a composite of both he and his father. 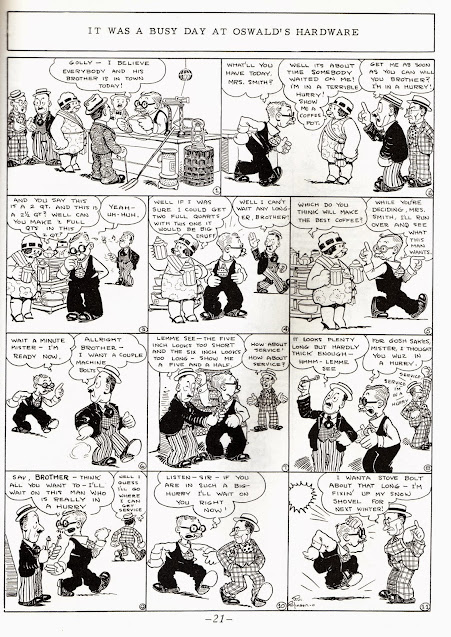 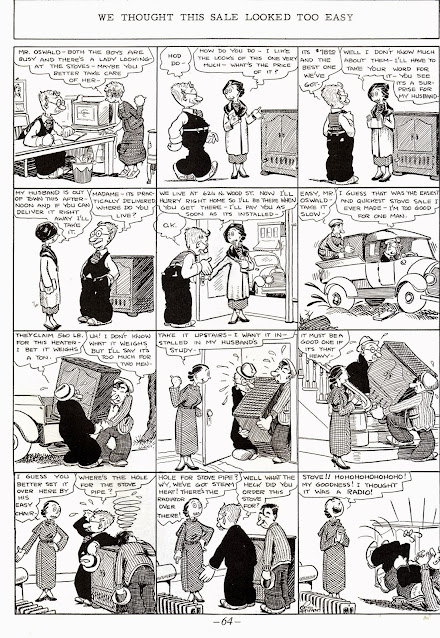 Johnson's wit and perception of people and their idiosyncrasies (particularly customers) comes through in many of his strips. The universality of these situations and characters made Mister Oswald far more than just a promotional piece for the Hardware industry. 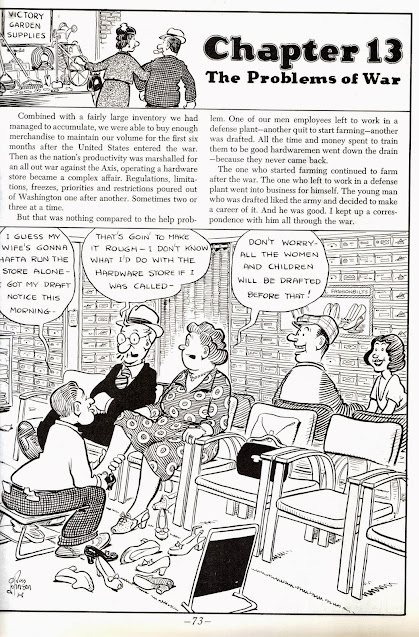 In Chapter 13 Johnson relates the problems of doing business during wartime and losing employees who moved to different jobs when they returned to the homefront. There is a real sense of the times, although Johnson's cartoon illustrates his ability to find humor in every situation. 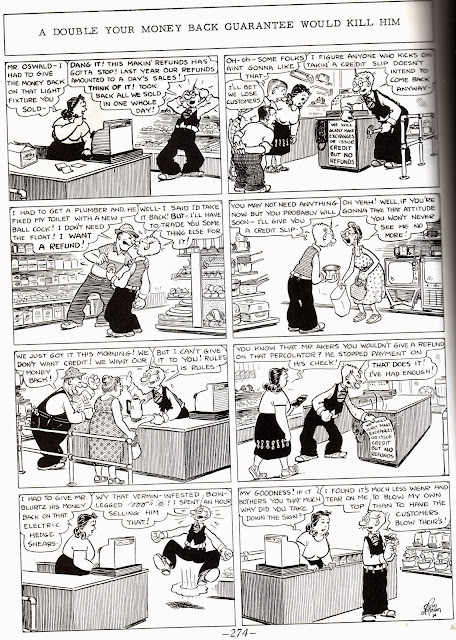 Johnson satirized his entire cast of characters, from customers and employees to Oswald himself. 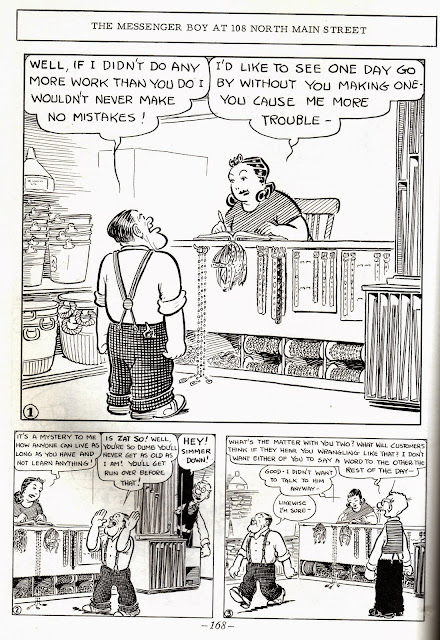 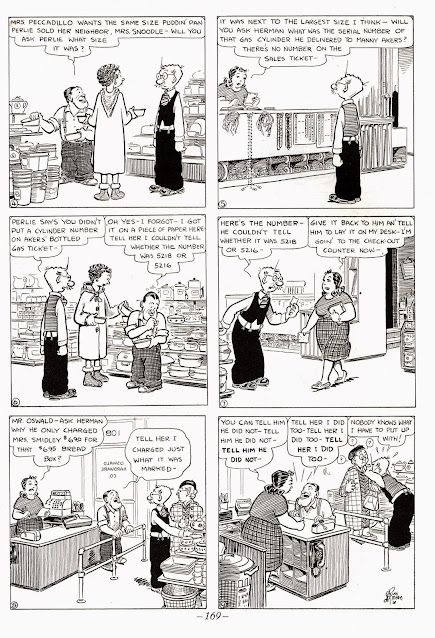 Anyone who has had issues with co-workers (and who hasn't?) can relate to the above two page strip! 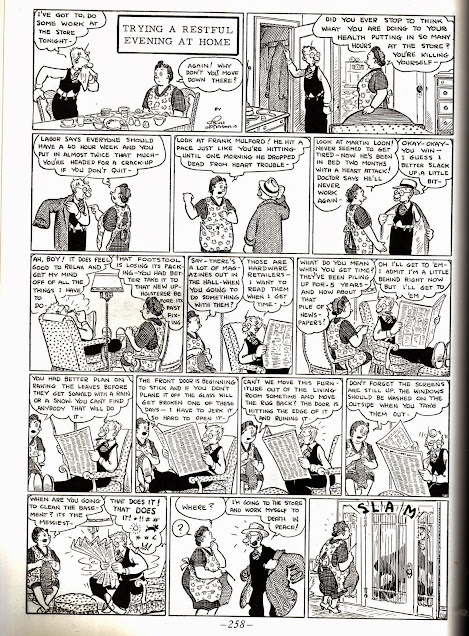 Oswald's wife was an important component of the strip. As Johnson describes in Chapter 41: "Mrs. Oswald can be tender or domineering, solicitous or termagant, an inspiration or an exasperation." 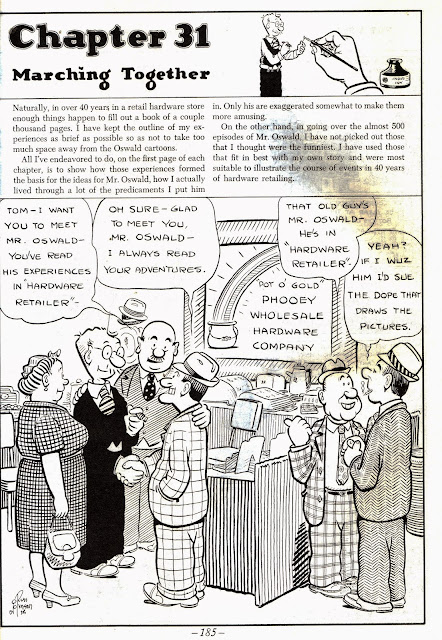 In Chapter 31 Johnson explains how the book was an opportunity to relate his experiences and not just publish the funniest strips, but in that mix there is a sincerity in both Johnson as creator and in his alter ego, Mister Oswald. In 1995 Rob Stolzer interviewed Johnson, this quote stood out in my mind:

" I lived that strip. I carried a little book around with me all the time. My wife complained about me looking at the book every once in a while, because I was living with all those people all the time. All those make-believe people, all those employees, I was living with them. When we would go to restaurants, they were at the table with us. I think I had some pretty good ideas." 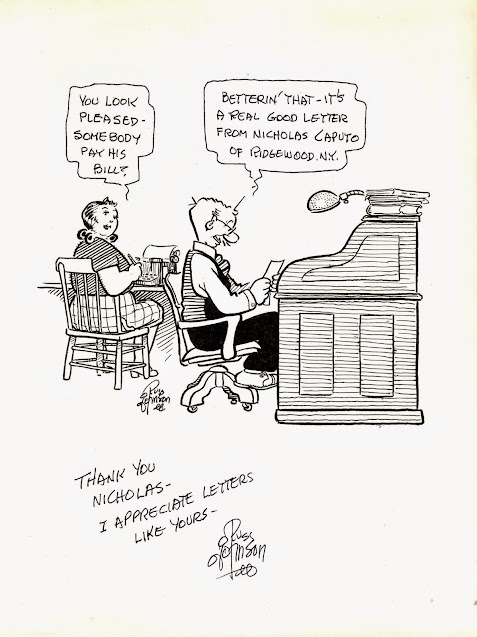 I'll end this on a personal note. In the late 1970's or early 1980's I saw an ad for Forty Years with Mister Oswald in The Buyers Guide for Comic Fandom, a weekly fanzine/adzine. I was aware of the strip because at the time I was working in a Hardware store located in the Bushwick section of Brooklyn, New York. Jacobson Hardware was reminiscent of Mister Oswald and Russ Johnson's real life business in a variety of ways. Both were family businesses, and the storefront had the same design as the version pictured on the upper right side of the book cover! I began reading Mister Oswald when I discovered it in the trade magazine Hardware Retailer, which, of course, was always in the store. Being a aficionado of both comic books and strips I was immediately enthralled by Johnson's artwork and storytelling. There was a charm, simplicity and honesty in his work that rose to the level of the classic strips. And Johnson knew his stuff: jobbers, customers and co-workers were recognizable. My good friend Frank and I often worked together in the store and found ways to exasperate our boss Sid, much like Oswald's employees did. I sent a check out when I saw the book for sale and enclosed a letter to Mr. Johnson. I not only received a signed copy of the book, but the above personalized note. It's something I still treasure all these years later.

Johnson left the hardware business in 1953, but continued to produce Mister Oswald for Hardware Retailer, ending his run after 62 years in 1989.

You can read Rob Stolzer's full interview with Johnson here:

..and for more samples of his work go here:

I enjoyed the scans from Russ Johnson's Mr. Oswald and I loved his thank you note. Thanks for sharing!

Thanks for the kind words, Jon.

Great stuff, Nick. Always nice to see something different from time to time.

The personalized note was the magic touch! Very relatable strips, we've all been there with co=workers for sure. I love to see great storytelling in art. It's through our stories that we connect with one another. Splash some comedy and it's a perfect brew.

Thank you kindly "unknown" Yes, that personal note was the topping on the cake! Mr. Johnson certainly know how to tell a story with warmth and humor.