Bill Everett and Company: Who Else Drew Tales To Astonish # 87?

It's no secret that Bill Everett often had trouble meeting deadlines. One such example is the Sub-Mariner story in Tales to Astonish # 87, although the credits leave no clue since the splash page asserts: "Illustration: Wild Bill Everett." A close examination points to other artists clearly being involved. Comic book credits, particularly in earlier decades, can sometimes be deceiving due to the method of production. The story would first be penciled (following either a script, or at Marvel, a plot synopsis or verbal discussion), lettered and then sent off to the inker - or the presumed inker. The letterer would add whatever name editor Stan Lee provided, but sometimes there would be a last-minute substitute. The substitute would occasionally add his own name, or someone in production might make a correction, but there are numerous instances where the printed comic saw publication with erroneous credits. These mistakes were sometimes acknowledged in future letter columns; other times they were forgotten and have remained in print for decades.

In looking over the Sub-Mariner story in Astonish # 87, January 1967; "Moment of Truth!," scripted by Stan Lee story, with Everett art/co-plot, lettering by Artie Simek and coloring by unknown (colorists were one of the last in the production line and didn't get credit at Marvel until the early 1970s) I realized the art looked odd; while Everett's hand is evident throughout the 12-page story, uncredited artists assisted in both the pencils and inks, which I will attempt to detail here. The first alteration can be seen on page 2; panel 2, although this appears to be an  instance where Lee was not quite satisfied with Everett's rendition of Lady Dorma and had John Romita "beautify" her. This alteration often happened in Kirby-drawn books as well. The background figure of Krang and Dorma's hand are all rendered by Everett. 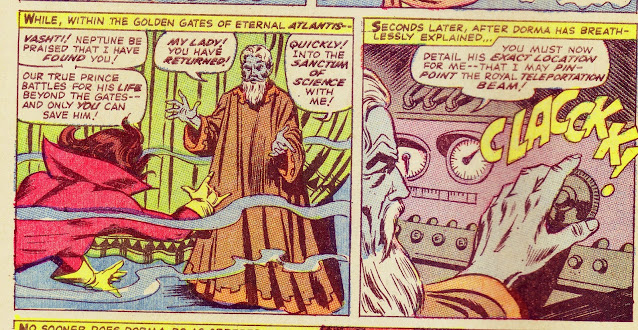 Page 4; panels 3-4 have redrawn figures of Lord Vashti, possibly by Marie Severin, whose duties included art, coloring and production in this period. Although Everett was involved as inker over Gene Colan and Jerry Grandenetti (Tales To Astonish #'s 79, 85 and 86) this was the first time in over a decade he returned to draw his creation. Everett's Sub-Mariner was a feature in Marvel Comics # 1, October, 1939, publisher Martin Goodman's entry into comic books. Namor had a long and successful run in comics for a decade; Everett returned to the character for a brief revival in 1954-55. Several years later, in the pages of The Fantastic Four, Stan Lee and Jack Kirby brought the character back for a new era of fans. When it was decided to give the Sub-Mariner a new feature in Tales to Astonish, Lee, with Gene Colan developed new characters such as Lord Vashti, - perhaps Everett did not draw him to Lee's satisfaction.

From page 5 onward there are signs that Everett was getting into deadline trouble. 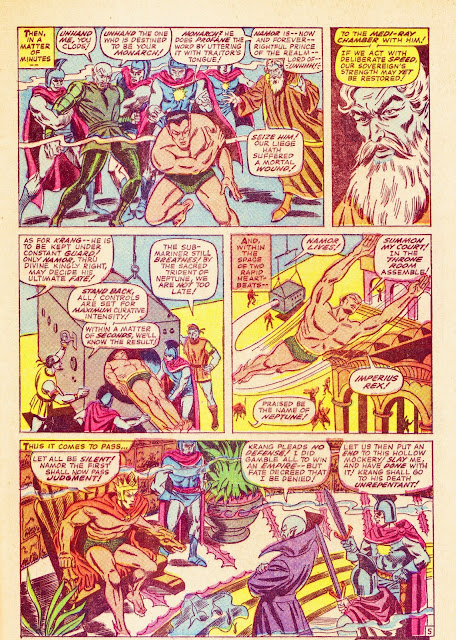 The inking on most of this page, particularly the backgrounds and figures, is the work of Frank Giacoia. His bold inking is evident in panel 5, especially on Krang and his guards. Everett may have inked the Sub-Mariner figures and perhaps Vashti in panel 2. If the deadline was looming and pages were coming in slowly, Lee probably decided to bring in others to complete the job. A lack of backgrounds and unfinished pages on Daredevil # 1 just two years earlier led to Steve Ditko and Sol Brodsky pitching in to finish the book.

Here's where it gets interesting. 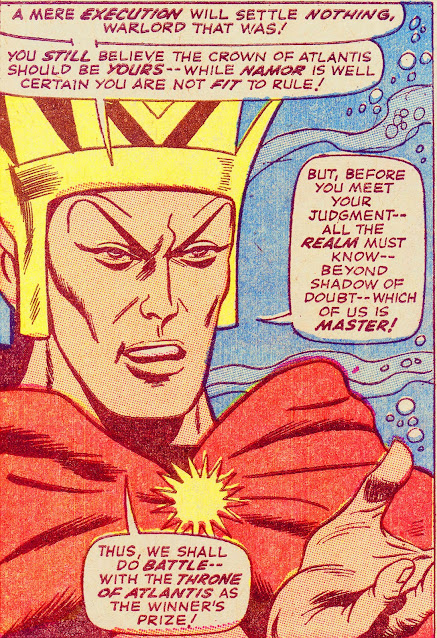 On page 6; panel 1, Everett apparently penciled and inked Sub-Mariner, which I suspect he did throughout the issue. This mixture of Everett pencils (or breakdowns)/inks point to a rush job.

In this three panel sequence on page 6 the face of Krang is the only evidence of Everett art. My guess is that Lee decided to alter whatever costume Everett originally drew. Panels 1 and 2 are inked (and perhaps finished) by Frank Giacoia. The final panel may be the work of Marie Severin and Giacoia. 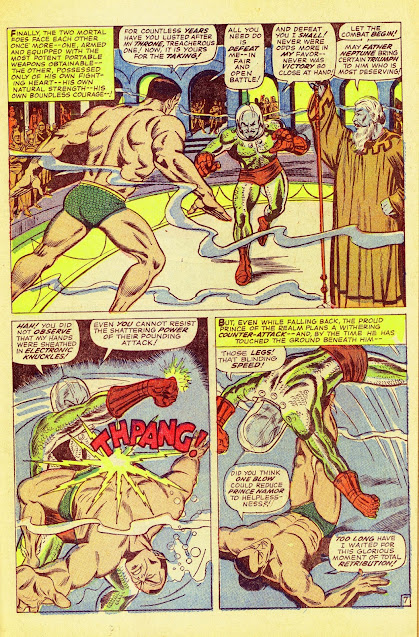 The next five pages show little sign of Everett's input. While Sub-Mariner is drawn and (apparently) inked by Everett, everything else, including Krang and Vashti, are rendered by Marie Severin. Either Lee was dissatisfied with Everett's rendition, and didn't feel it had enough Kirby-styled theatrics, or, more likely, Everett only drew Namor, with Marie filling in details on the four page sequence. Whatever the circumstances Marie's figure work and poses are distinctive.

Dick Ayers' inking also begins on page seven. Ayers usually worked at home and mailed his artwork in, but was asked to come into the office several times in 1966 to assist on deadlines. According to email correspondence in my files dated 7/21/2004, Ayers inked a few Daredevil stories (#'s 21 and 22, with Everett and Giacoia). On 6/10 and 7/8 he again helped out, although his record books had "no mention of what I was assigned." The January, 1967 dated issue of Tales To Astonish # 87 arrived on stands sometime in October, 1966, which would leave a 3-4 month period before the comic was published. This fits into the time frame when Ayers could have worked on this story. 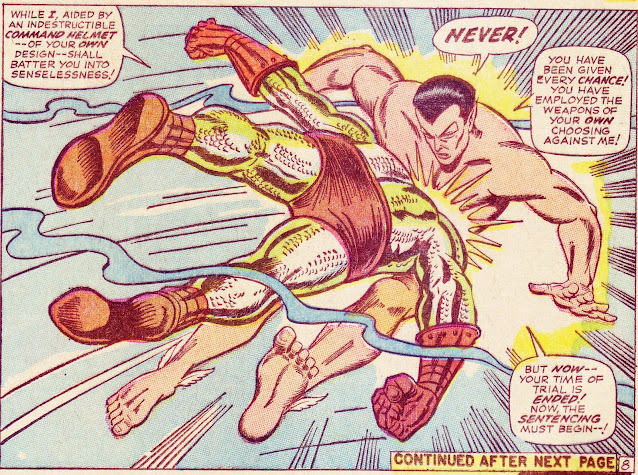 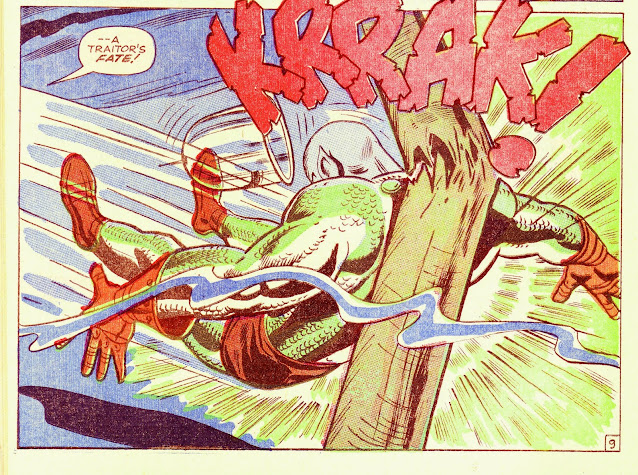 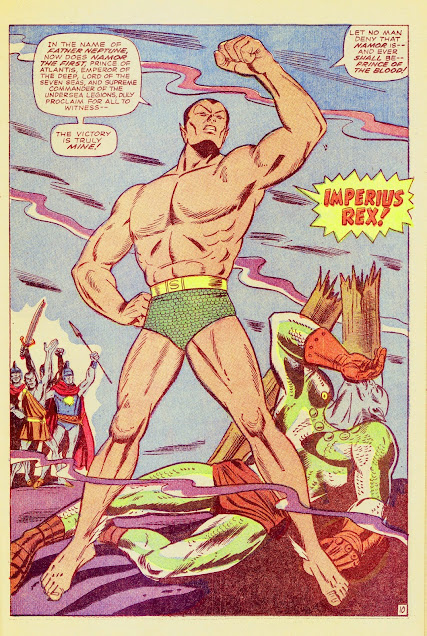 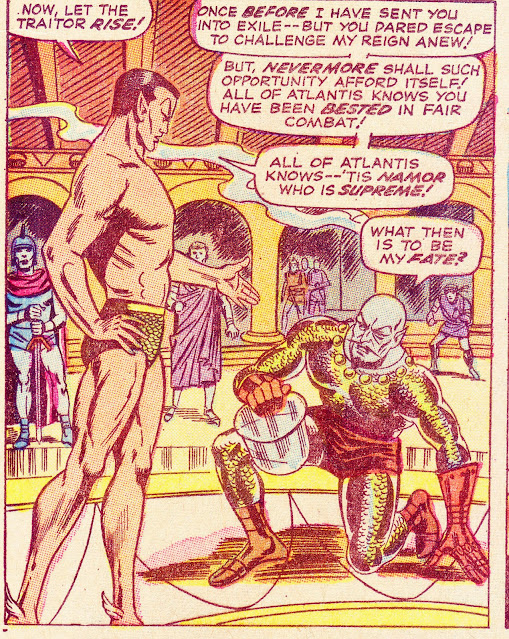 Page 11 is an interesting blend. Frank Giacoia's inking is evident in panel 1, although Everett drew Namor and Krang (or - at the very least - his face). 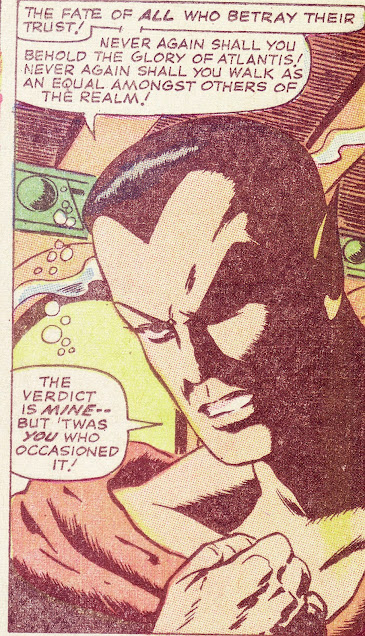 Giacoia (or possibly his friend and fellow inker Joe Giella, who often assisted Frank) provided background inks on page 11, but panel 2 looks like another artist inked Sub-Mariner. I'm not certain who, although it bears similarities to Dan Adkins style. Not impossible, but this was a month or two before his first credited Marvel job. 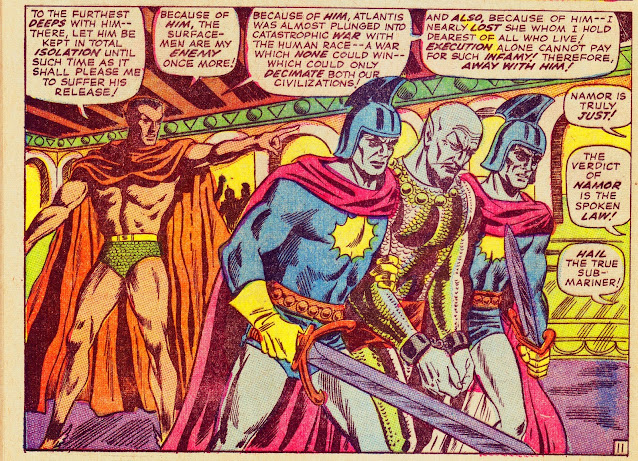 The final frame on page 11 appears to be mostly Everett pencils and Giacoia or Giella inks. Namor, Krang and the guards all have Everett styled poses and faces. The inking on Sub-Mariner looks a little different though, similar to the "Adkins" style in the previous panel. 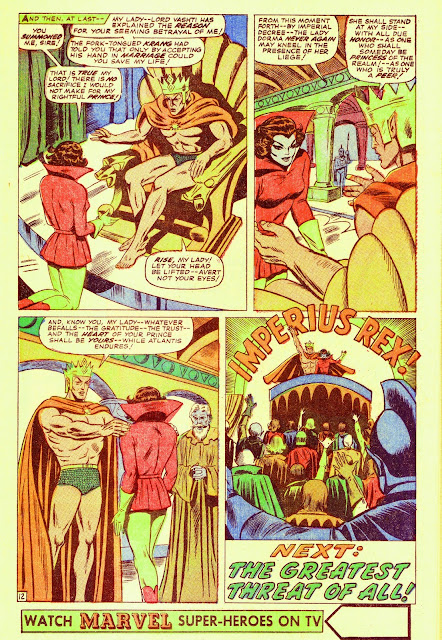 The final page includes Everett drawing complete figures of Namor and Dorma (with another Romita face-lift in panel 2). Ayers likely inked the backgrounds, and either inked the last panel over Everett pencils/breakdowns, or drew it all himself. As for the next issue blurb: "The Greatest Threat of All!" may have referred to a missed deadline and late fee payments! 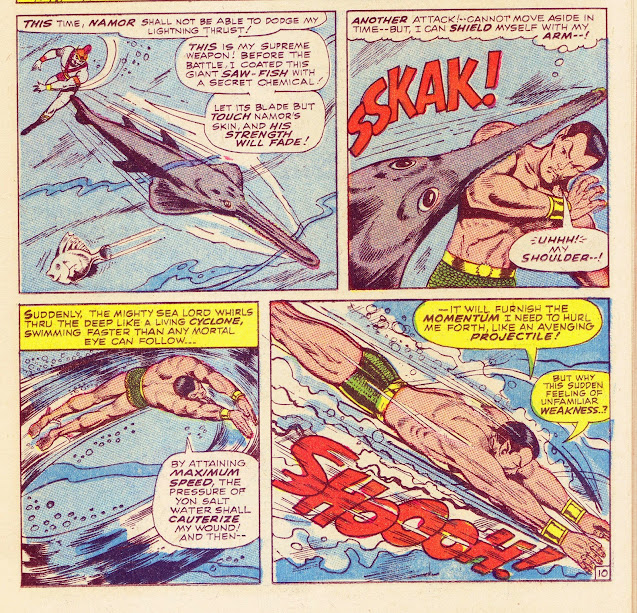 Marie Severin showed up three issues later, redrawing this sequence from the Everett-drawn Sub-Mariner story in Tales to Astonish # 90, April 1967. (I should also note that John Tartaglione appears to have contributed some uncredited inking on this story).

Two years later Marie was assigned full art chores on Sub-Mariner (by that point in his own title) beginning with issue #12, teamed with writer Roy Thomas, and did impressive work on the character. I would be remiss not to mention Marie's excellent collaborations with Bill Everett on a run of covers in the early 1970's. You can read more about it on my earlier blog post:

While Bill Everett's return to his creation in late 1966 was welcome, the combination of deadline issues, stiff artwork in places and a lack of interest in the direction Stan Lee had taken his character led to a short-lived venture. In 1972 Everett was again reunited with Namor, this time for a more enjoyable run due to greater control and superb art, arguably some of the best in his long career. While deadline issues again surfaced, Everett's work shone brightly. His death in 1973 at the age of 56 was a tremendous loss to the industry and aficionados of comic art.
Throughout his career Everett's artwork had a distinctive flair and was suited to all types of genres: superhero, adventure, horror, jungle, crime, romance, even animated features. In his final years Everett's art reached a plateau. His fluid ink line was as attractive as the sea he rendered with subtle beauty. An original, Everett made his mark in comic books and remains unparalleled. 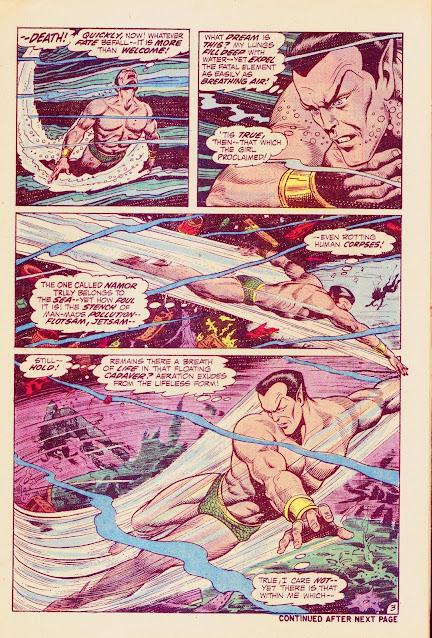 Exquisite Bill Everett art on his return to Sub-Mariner. "Who Am I?" Everett story/art (and probably colors); John Costanza letters, Sub-Mariner # 50, June 1972.
Posted by Nick Caputo at 9:33 PM

Good catches there but I suspect there were others involved in the pencil stage. Everett's work in all these TALES TO ASTONISH stories look to me like team efforts and the pencils clearly don't look like the work of the same guy from issue to issue. Werner Roth turns up in #96 without credit and he may be in earlier issues.

Thanks. There may be another artist or two involved, but I concentrated on the artists I was "certain" I saw. You're correct that many of Everett's "solo" issues look like a hodgepodge, although in some instances it nay be Stan Lee "tinkering" with art because he wasn't particularly pleased with Everett's finished results.

I'm with you on #94 being most or all-Everett, although #89 looks pretty much Everett too, with the exception being the final panel, which looks like Romita or Romita/Giacoia.

Y'know, Nick, given the commonly held view in some circles of Marvel being a cold, heartless company that ripped-off its contributors, it's good to see that Bill Everett was given work when it would probably have been easier to give it to someone else. All that extra work by other hands would've cost time and money, and was probably hassle that could've been avoided by giving the job to someone else. It was good of Stan to ensure that, as much as possible, old hands were looked after and accorded a measure of respect. Another fascinating blog post, Nick - well done.

Kid - It's often been noted by people like Roy Thomas that Stan Lee always found work for artists that had been with him for the long haul. Even when a few were not favorites, such as Werner Roth, Paul Reinman and Everett. The latter two were kept busy coloring, inking and (in Everett's case) writing. That thoughtfulness didn't occur when Stan was no longer running the show.

True, Nick, but a lot of those who criticize Marvel as a heartless corporate entity, don't usually differentiate between modern times and back then. Whereas, as you rightly note, there was a time when Marvel (under Stan) wasn't the 'evil emissary of Satan' that some people seem to think it was.

I'm surprised to learn that Werner Roth wasn't a 'favourite' - he was always a favourite of mine. Even on Lois Lane.

I always enjoyed his work too, both on X-Men and Lois Lane. I discovered his earlier art on Apache Kid, Lorna, Jungle Girl and assorted mystery, war and romance comics for Atlas terrific. His work was a little too "quiet" for Marvel standards, but I thought he did a terrific job, especially on the X-Men in their civilian id's.