Alan Class was a publisher in the UK who reprinted American comics from approximately 1961-1989. Titles such as Creepy Worlds, Sinister Tales, Secrets of the Unknown and Uncanny Tales included an array of content, licensed from companies including ACG, Charlton, Archie/Radio Comics and Atlas/Marvel. His comics line was not dated allowing titles to be continuously reissued over the years. For a more thorough account of Class' line please check this blog:

This link to the Grand Comic Book Database will connect you to all of Alan Class' titles:  http://www.comics.org/publisher/3391/

Class reprinted a mixture of Atlas/Marvel material, primarily mystery/monster and superhero: everything from Tales of Suspense to Amazing Spider-Man. A fascinating discovery is that some of the cover art they used was on occasion taken from unaltered stats Marvel sent them.

Before final publication covers were often tinkered with for various reasons; sometimes changes were minimal - altering a word balloon - other times there were changes to figures, faces, backgrounds, etc. While its likely that Editor Stan Lee or Publisher Martin Goodman made most decisions, sometimes the Comics Code objected to a cover image and last minute changes were instituted.  For a more detailed discussion check my earlier blog post: http://nick-caputo.blogspot.com/2012/02/unaltered-reprint-covers.html

And now let's compare the original covers to the unaltered versions. 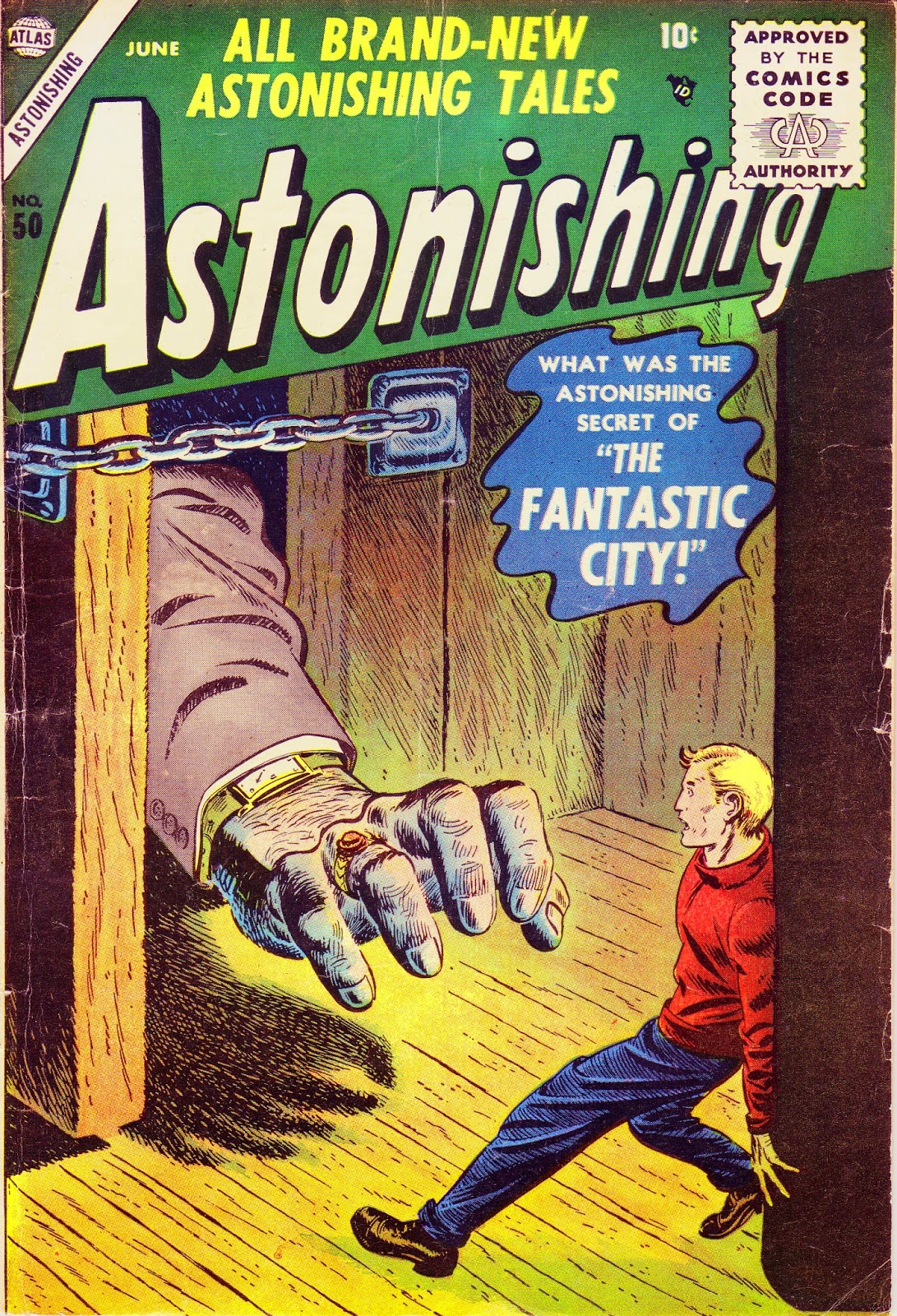 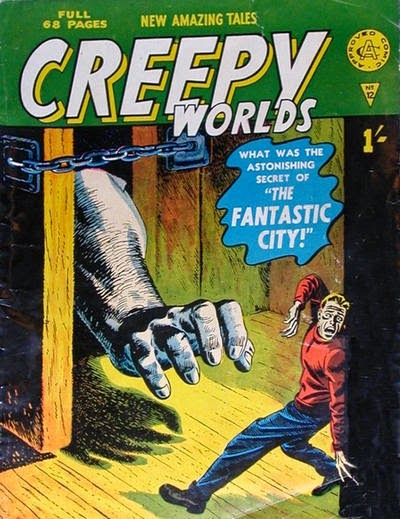 The cover to Creepy Worlds # 12. The raised right arm and frightened face of the man and the giant bare hand differs from the Atlas version. I'm assuming someone at the Comics Code Authority came to the conclusion that the addition of formal attire made the giant hand less frightening. All Alan Class cover images from the GCD. 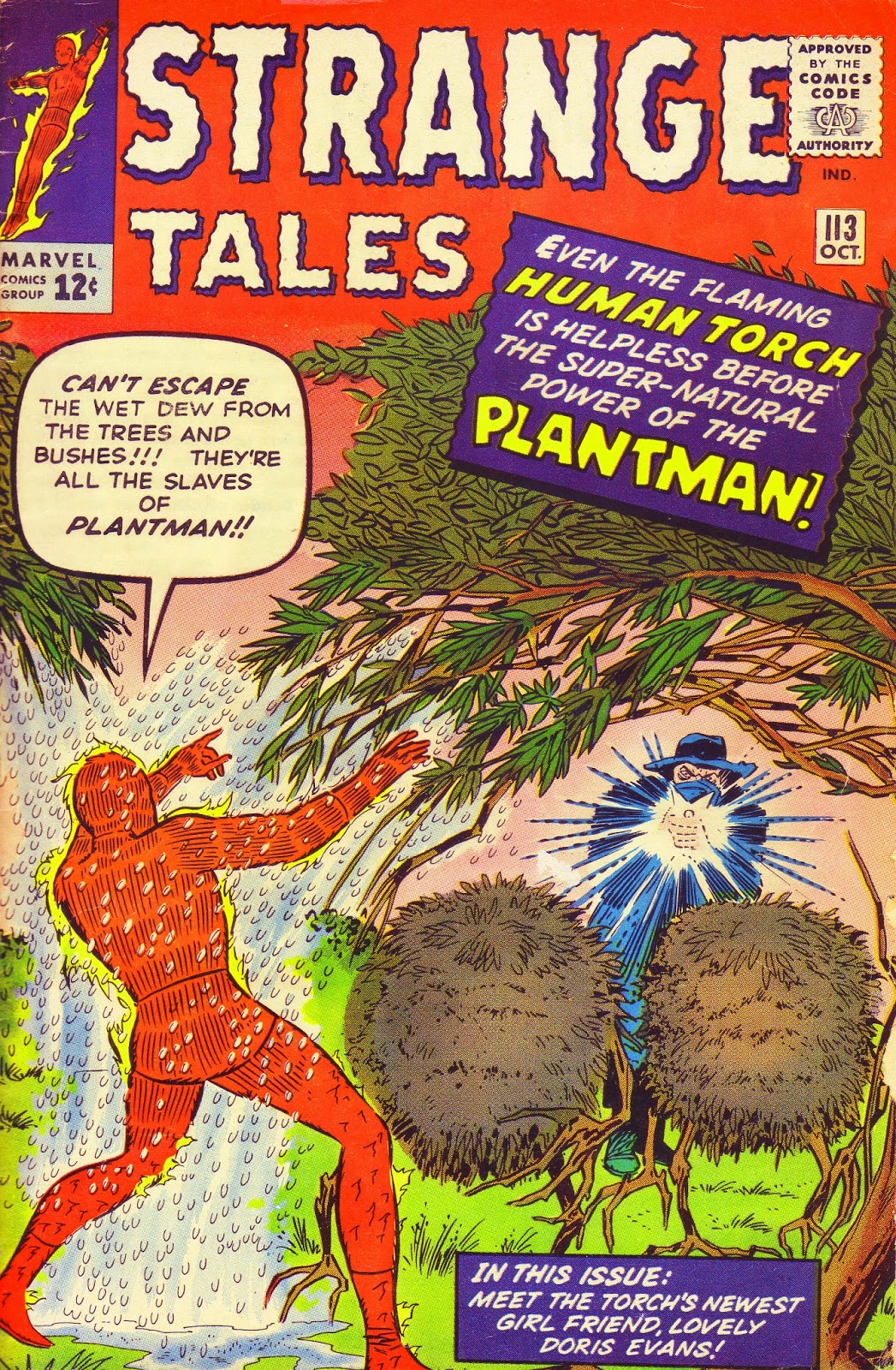 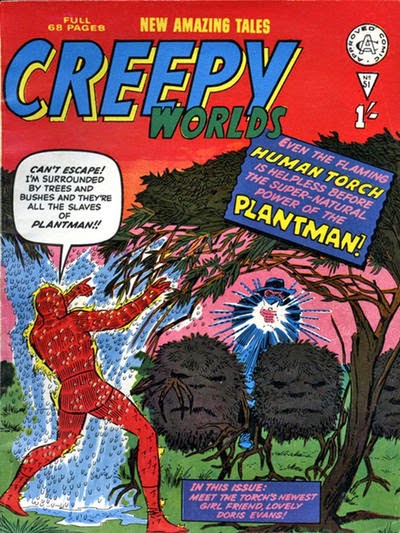 Creepy Worlds # 51: here is an interesting find. Two major changes appear on this unaltered stat. Stan Lee had the word balloons altered before publication. I guess the "wet dew" was considered more threatening than just the trees and bushes attacking the Torch! Also, take a look at the trees - Kirby's original gave them faces - the published Strange Tales cover eliminates the faces (although they still have "arms and legs"). I find the unaltered cover to have more personality. In both versions the top half of the Human Torch appears to have been touched up by an artist other than Kirby - possibly Sol Brodsky. The crude line work suggests to me that Kirby originally drew Johnny Storm in his civilian guise since the "wet dew" would have doused some of flame. Lee may have felt the Torch would be more recognizable in his flaming appearance. If so, an even earlier version of this cover may have been drawn.

Side-note: "The Coming of the Plantman!" was scripted by Joe Carter - NOT the Toronto Blue Jays outfielder who hit a walk off home run in the 1993 World Series  - but the co-creator of Superman, Jerry Siegel, under a pseudonym. 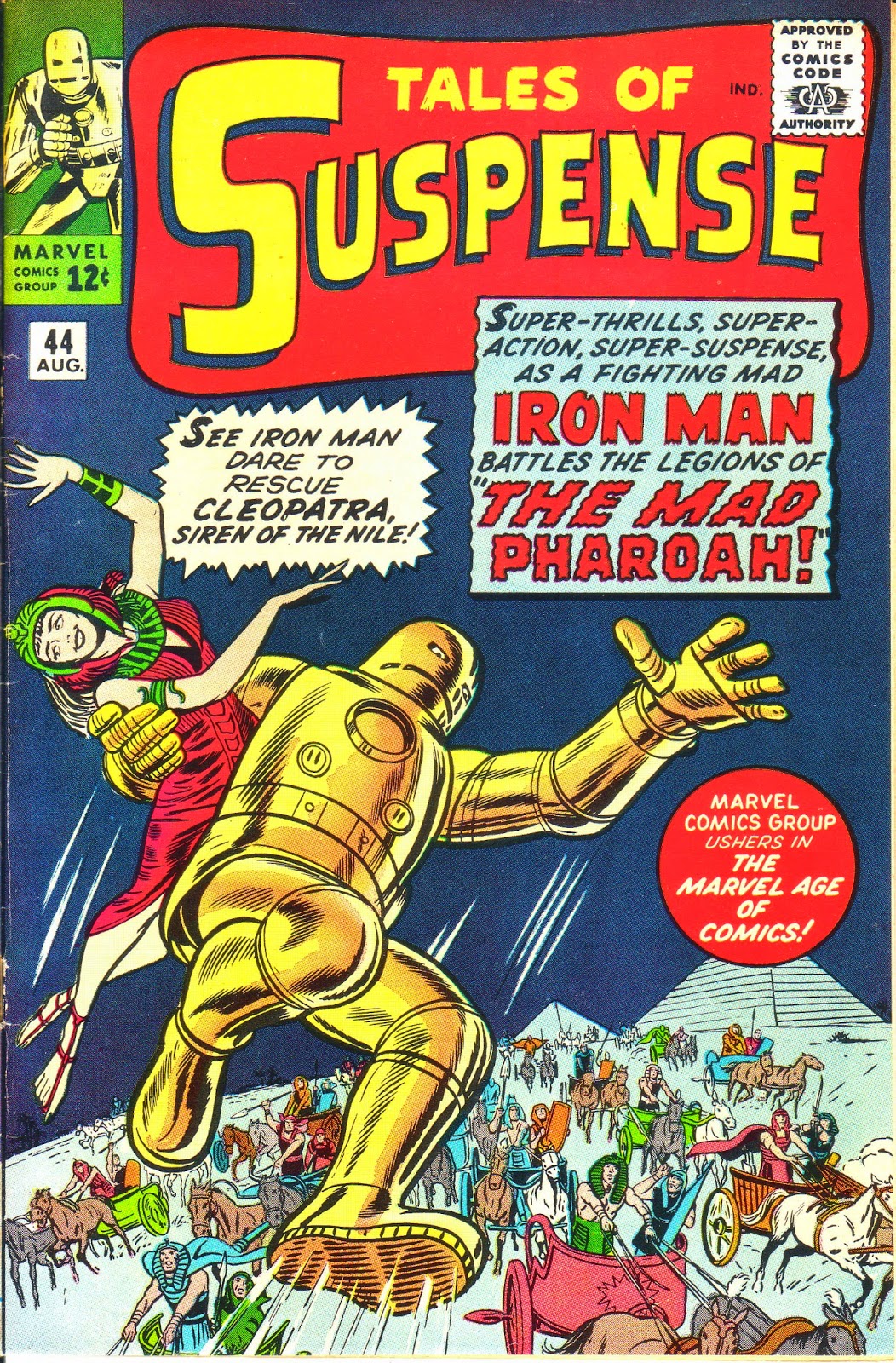 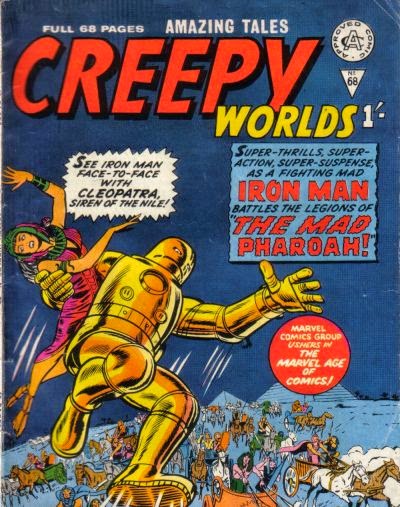 The unaltered cover has been published a few times, but for those of you who missed it the copy was changed from the original "See Iron-Man face-to-face with Cleopatra" to "See Iron-Man dare to rescue Cleopatra" and the queen of the niles expression was modified from concerned to smiling gleefully. From Creepy Worlds # 68. 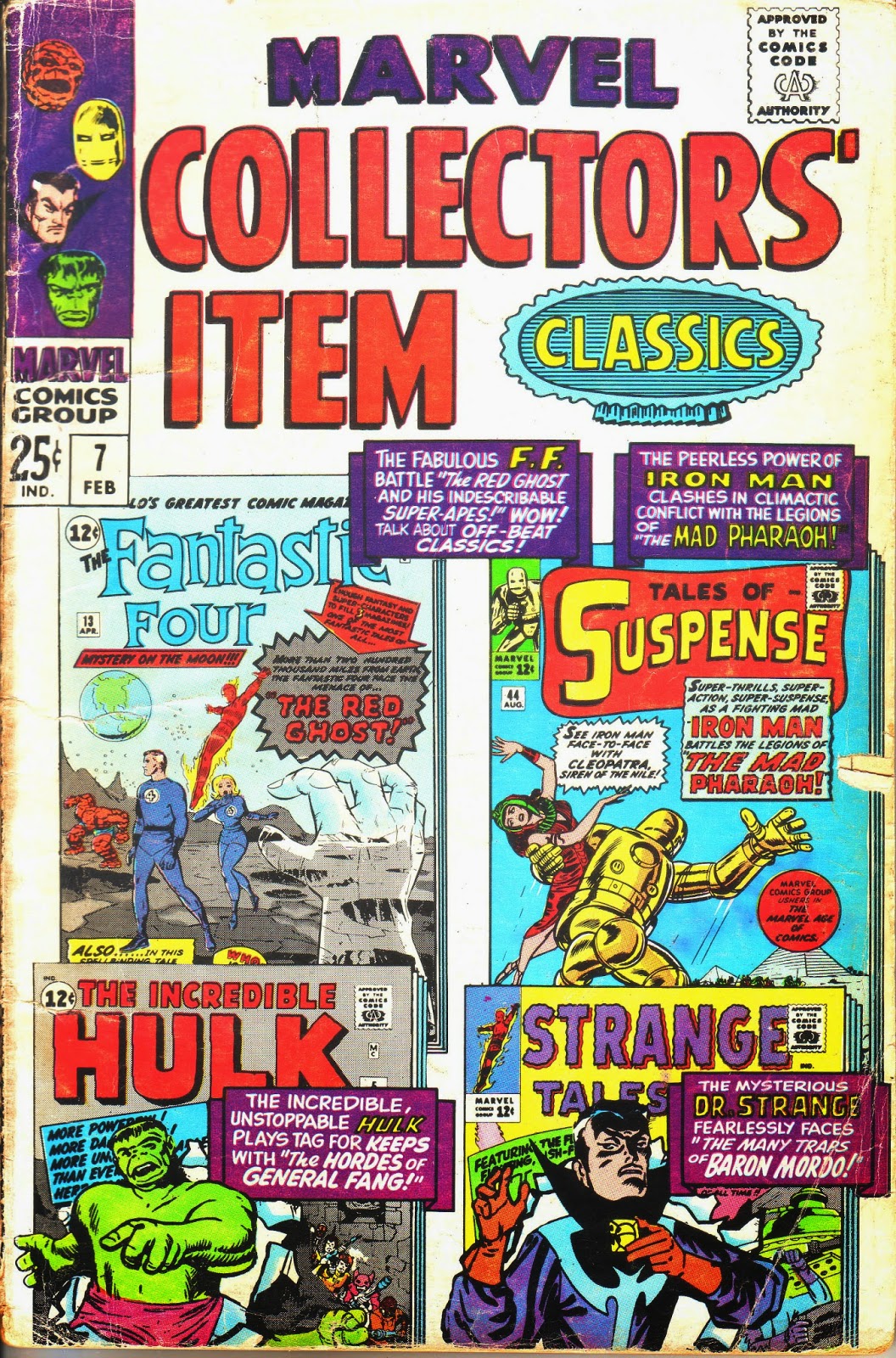 A small reproduction of the cover also appeared on Marvel Collectors' Item Classics # 7, February 1967. Note the spelling of the word Pharaoh was finally corrected. I suspect Roy Thomas, then editorial assistant wrote the cover copy and noticed the error. 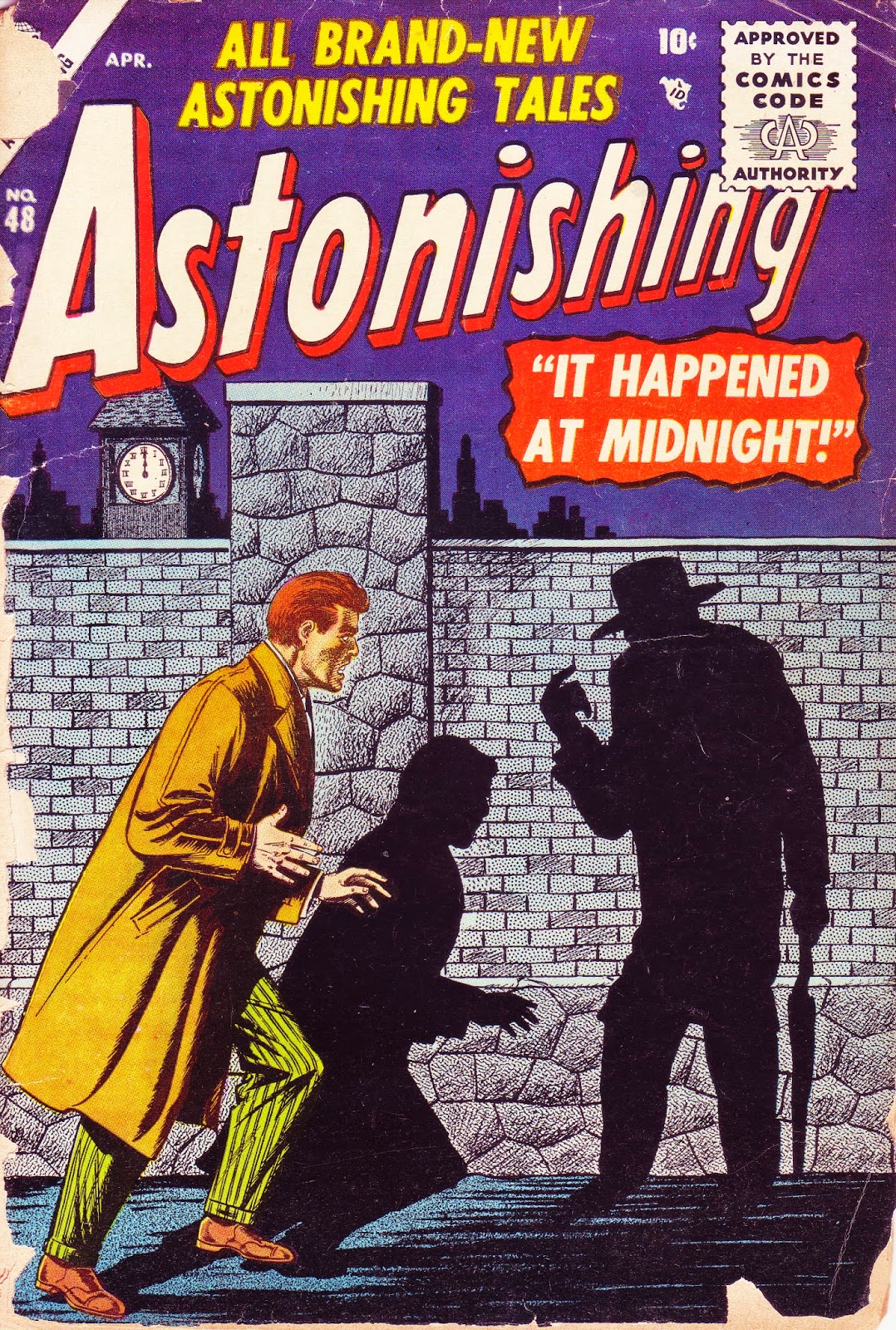 The cover to Astonishing # 48, April 1956. This was assumed to be drawn by Carl Burgos, but take a look at the original stat: 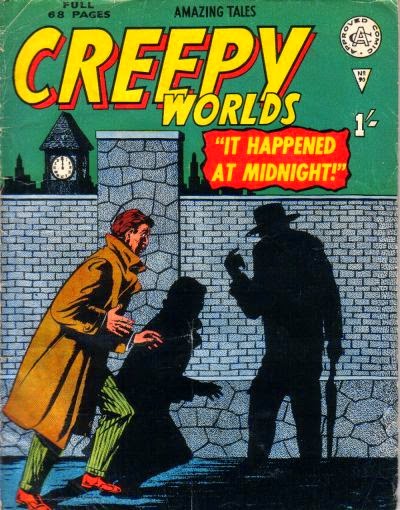 ..particularly the face, then look at the figure, backgrounds, etc. It's actually the work of Bill Everett, who drew some of the moodiest covers for Atlas in the 1950's (this is one of his tamer efforts, even for a Code approved issue). Burgos was often identified as the cover artist because he redrew the man's face on the Astonishing cover. From Creepy Worlds # 90. 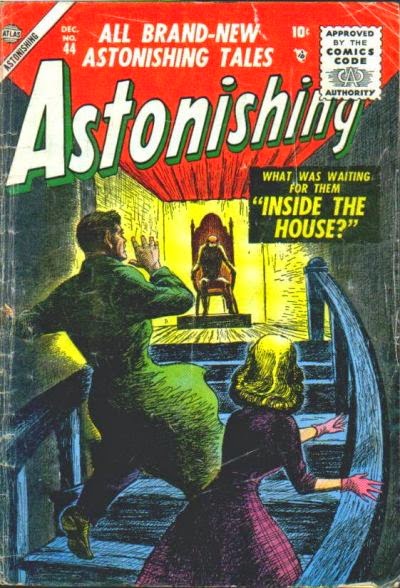 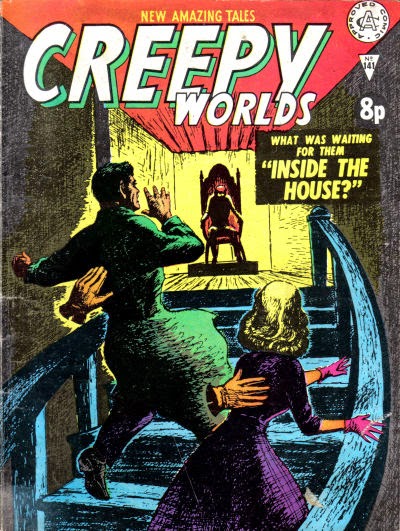 ...and the unaltered version from Creepy Worlds # 141. The hands pushing the man and woman were eliminated from the Astonishing cover. MUCH less frightening, don't you think?? 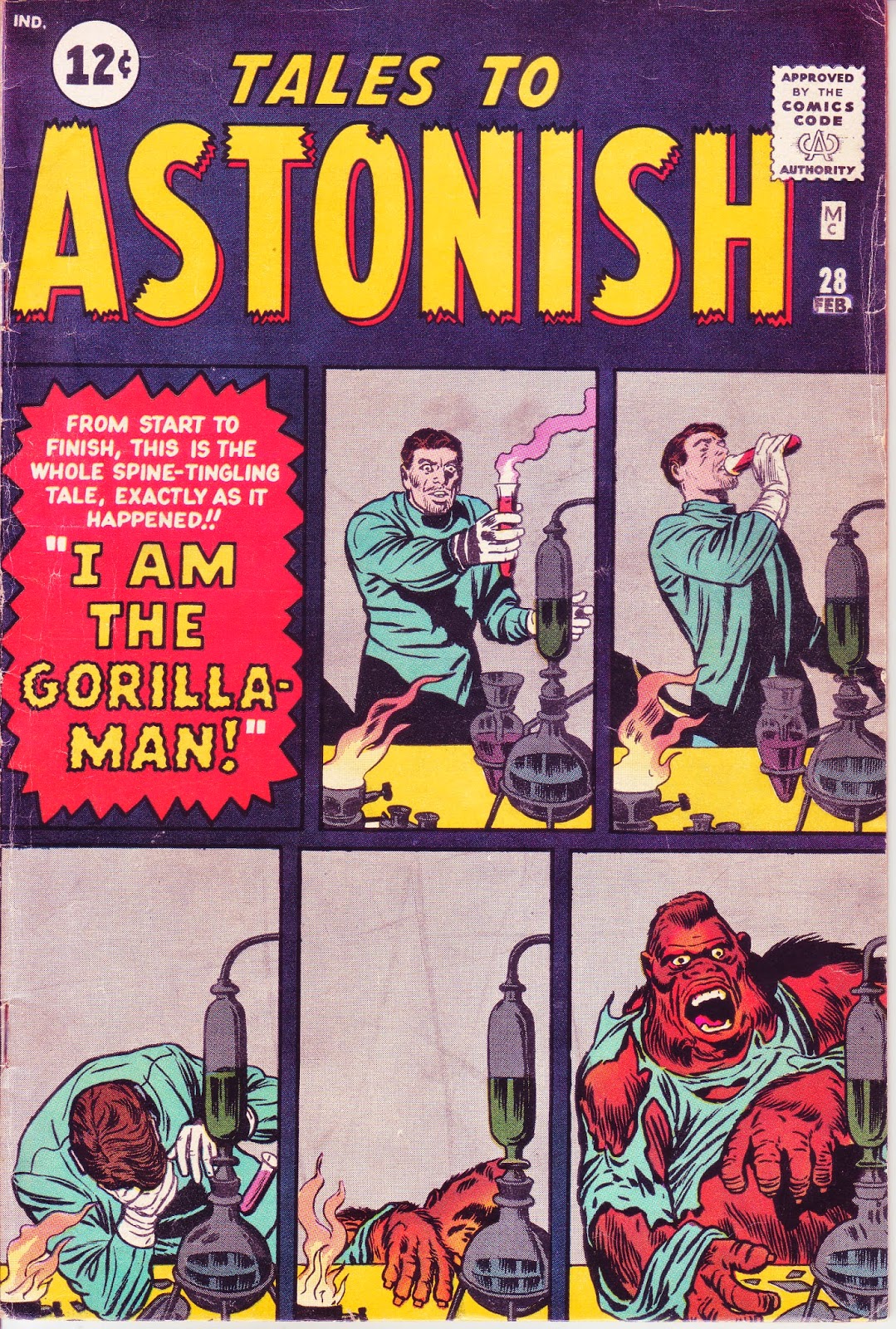 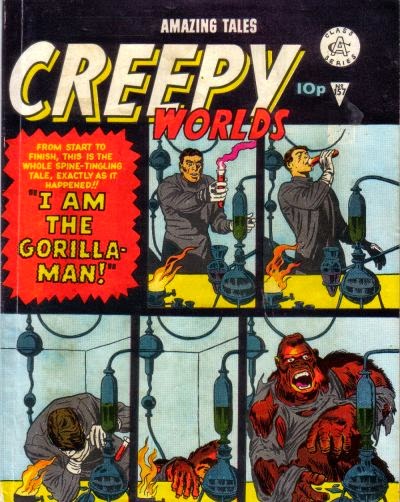 Minimal changes appeared from the original stat to the published cover. The background elements were deleted in order to focus on the scientist transforming into an ape and facial hair was added to the doc to make him look closer to the way he was drawn inside, with beard and goatee. Although Kirby drew both cover and interior story, covers were usually drawn last and Kirby invariably forgot what the character looked like. From Creepy Worlds # 157.

And just to be thorough, the unaltered cover also showed up on Fear # 5, November 1971, with new lettering by Morrie Kuramoto: 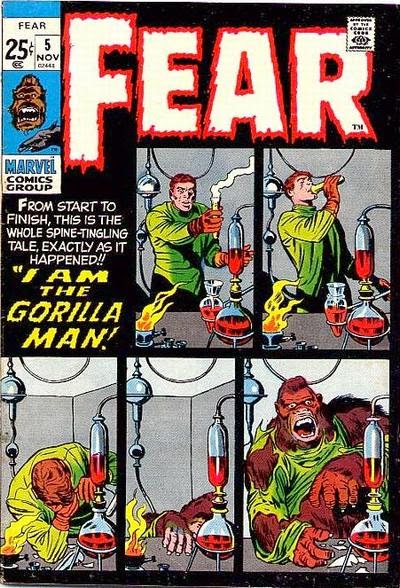 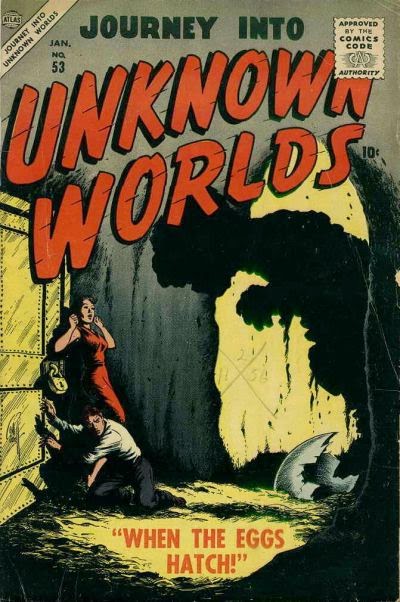 And we close out with another Bill Everett stunner from Journey into Unknown Worlds # 53, January 1957. 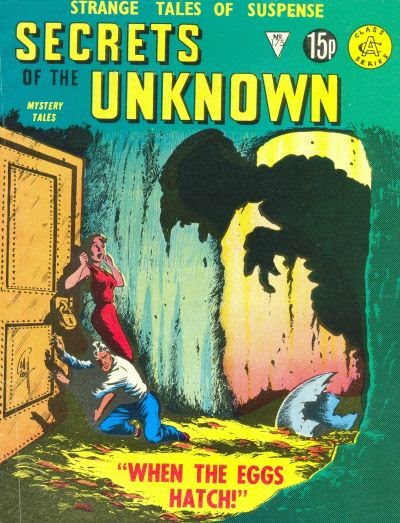 As seen when published in Secrets of the Unknown # 175, the faces of the man and woman were altered and the bird creature looked much more sinister in the original version, changes likely incurred due to demands of the Comics Code Authority.

Great stuff, Nick. I remember having that ish of Creepy Worlds back in the '60s. Incidentally, the cover blurb was also altered (from 'face-to-face with' to 'dare to rescue'), not just Cleopatra's expression.

I can always rely on you to keep me honest! And because I'm so kindhearted I added another Suspense cover repro.

Very interesting Nick. I've run into a few Class reprints and it's amazing how diverse they are. That first Astonishing in your post was once claimed to be Ditko. Of course I disputed that as it doesn't look anything like him!

This is fascinating - I always thought Alan Class comics were meant to be thrown away and forgotten as soon as you'd read them! Since no-one else has explicitly mentioned it, I might suggest that the change in Cleopatra's expression, and the clarification that Iron Man is "rescuing" her, is to dispel any hint that he might be sexually abducting her!

Interestingly, Nick, the misspelling of 'Pharaoh' as 'Pharoah' was restored for the Omnibus and new softcover Masterworks editions, but they missed one in a thought balloon on the splash page. In fact, the original corrections (for MCIC) were handled better than the restorations of the mistake. This was because, not having uncorrected proofs, they had to hand-letter the 'OA' onto previously corrected stats.

Andrew, an interesting speculation, but it's unlikely that kids would ever have thought that, simply because Iron Man was the hero and heroes didn't behave that way back then. (As far as any sexual aspect goes, that is.) Although it's likely that the changes WERE probably instituted so that it was clear that IM wasn't Cleopatra's enemy

Bob - That cover was incorrectly credited to Ditko at one time or another but it's clearly not Ditko.

Andrew - Your theory on the change of expression for Cleopatra is certainly plausible.

Kid - Thanks for the updates on the later reprints. That Pharaoh word sure has given plenty of proofreaders headaches!