Patsy and Hedy No More!

As noted in my previous post, by the mid-1960's Marvel's "Girl Line" was dwindling down. Patsy Walker, who originated in 1944 and received her own title in 1945, had a healthy twenty year run, ending with issue # 125, Dec 1965. Her spin-off title, Patsy and Hedy, appeared in late 1951 and ended in late 1966. A single Annual appeared in 1963. With the cancellation of Modeling with Millie in 1967 (which began as Life with Millie in 1950), only Millie the Model remained, but the era of soap opera dramatics concluded when the title reverted back to humor in the Archie mold. 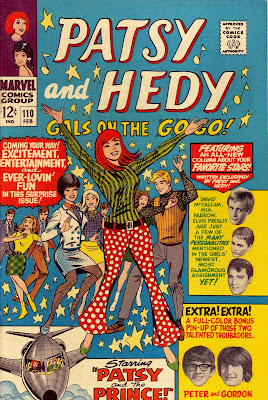 This issue included a change of format, one inspired by the many teen magazines such as 16. The decision was likely made before the title was cancelled. The cover promotes a new column, and features head shots of David McCallum (heart-throb of The Man from Uncle TV show); Mia Farrow (star of Peyton Place, a very popular and well written prime-time drama; Ms. Farrow moved on to a successful screen career); Elvis and Peter and Gordon. The British duo had their biggest hit in 1963, "A World Without Love", a catchy tune written by a guy named Paul McCartney. You can see them perform the song here: 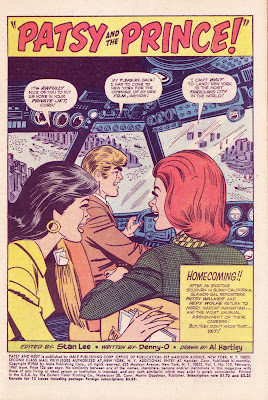 "Patsy and the Prince!" opened with a 14 page Patsy and Hedy tale, scripted by Denny O'Neil and drawn by Al Hartley. There are no inking or lettering credits: Hartley may have inked the story, although the thick lines suggest George Roussos involvement . Sam Rosen does his usual expert job on letters. 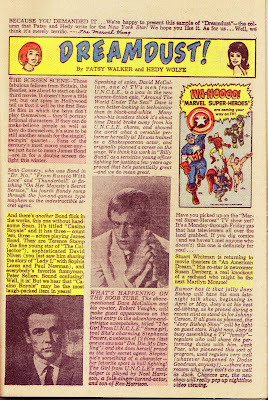 "Dreamdust" is a three page column "written by Patsy and Hedy", although it may actually be Denny O'Neil who worked on the script. Page one includes info on "The Screen Scene", with talk about the Beatles, Sean Connery and his latest Bond movie; David McCallum. the Girl from Uncle TV show, Stuart Whitman, Joey Bishop and a plug for the new Marvel-Super Heroes cartoon. Why miss out on a little self-promotion? 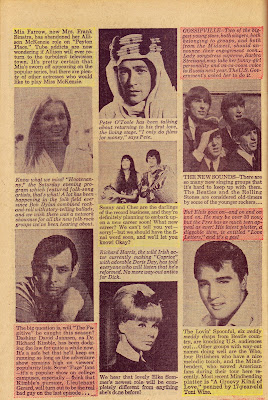 Page two focuses on Mia Farrow, David Jannsen, who was still running on the classic television show "The Fugitive", Peter O'Toole, Sonny and Cher, Elke Sommer, Elvis and points to "New Sounds", including The Loving Spoonful and the Who. 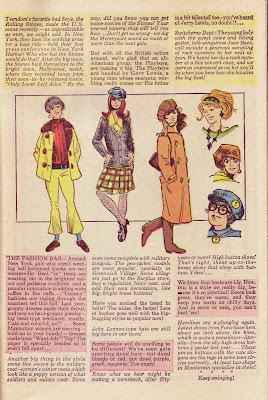 Page three continues discussion on the music scene, with tid-bits on the Rolling Stones, Gary Lewis and the Playboys and Joan Baez (now that's a diverse group of musicians!). "The Fashion Bag" closes out the column with fashion info, including illos by Marie Severin! 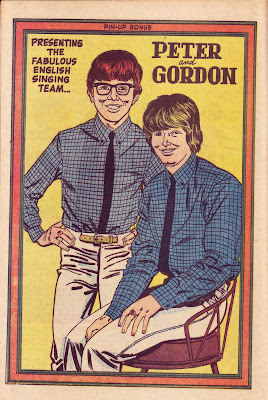 A Pin-Up of Peter and Gordon follows, drawn by Al Hartley (although Peter looks eerily similar to Alfred E. Newman!)

The rest of the issue included the usual feature pages and letters column, but this page is of particular interest: 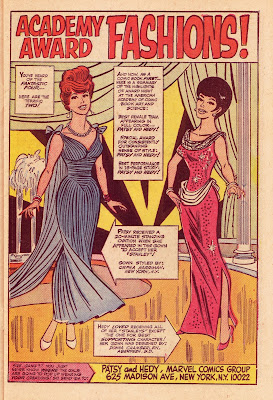 The "Academy Award Fashions" page references the Fantastic Four (and if this pin-up only featured Patsy or Hedy, I don't think they would have gotten away with "the terrific two" line!). The Academy of Comic Book Arts and Science was a real award, originated by Jerry Bails and posted in the fanzine Alter-Ego, so this page was clearly written by someone who knew of its real world origins. Denny O'Neil wrote the opening tale, so he may also have written this page, but perhaps Roy Thomas (who was involved with Alter Ego early on and took over from Jerry Bails. Hmmnn, I seem to recall Roy is still producing Alter Ego, one of the best publications on comics and its history) may have had some input. Roy originally thought he wrote the last issue, but when I sent him a page he realized that Denny took over for him when Stan put him on Sgt. Fury. Roy's last issue was actually issue 105, which coincides with the first issue of Sgt. Fury he wrote (#29, April 1966). I'll check with Roy about this page and update if I receive further info. Substituting for the Alley awards here are the "Stanleys", of course. Al Hartley pencils; Mike Esposito inks?; Sam Rosen letters.

I hope you enjoyed this look at a little seen, late period Marvel Girl title. I'll probably be back with some more surprises in this area again.

This issue is from the collection of, and its images used by special arrangement
with Dr. Michael J. Vassallo.

Thanks, Jacque! High praise from one of my favorite bloggers!

Didn't Patsy & Hedy show up at Reed & Sue's wedding? Or was it just Millie? (I've got the issue - I really should check.)

Patsy and Hedy did show up at Sue and Reed's wedding and they were looking for an unseen Millie.

I think they took the bus to get there and John Caputo drove them!!

I was there too - as a pageboy.