There are plenty of twists and turns on the road of comic books and their history, many of which are both unusual and fascinating. For instance take Maurice Bramley, a name I suspect few recognize. His involvement drawing Marvel characters is largely unknown because he worked for an Australian company, Horwitz, in the 1950s and 1960s, pencilling many covers based on the originals by artists like John Severin and Jack Kirby. Horvitz reprinted stories of Kid Colt, Rawhide Kid, Two-Gun Kid, Ringo Kid and Apache Kid, as well as war and superhero stories, and reprinted other companies work as well. For a more detailed history of Howvitz, accompanied by examples of many Bramley covers, please go to this wonderful site:

While Bramley was often reworking the original covers, unlike artists that copy the styles of those artists, he brings a personality of his own to the artwork. Bramley's work has a distinct charm and he reinterpets many cover scenes with a decided flair. Bramley was not a young kid breaking into comics, indeed, he had worked in commerical art and magazine illustration for years before he drew any comic books. To learn more about Bramley, go here:

Horwitz appears to have ended publication in 1965, so many of the later Marvel Super Hero stories were not printed there, but they did reprint early issues of Fantastic Four, Spider-Man, Human Torch, Daredevil and Ant-Man. Its interesting to see Bramley's interpretations of the characters. There is an old world charm to his art and it fits well with the odd conglomeration of heroes. 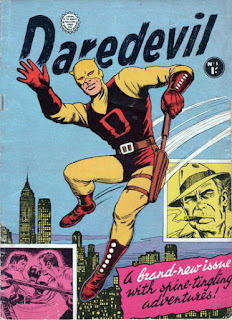 Maurice Bramley's cover for Daredevil # 1, Horwitz, 1965. Based on the original by Jack Kirby and Bill Everett. While closely resembling the Kirby/Everett DD figure there are enough touches to make this one interesting on its own, including the boxing scene added in the lower left hand corner.

Not only did Branley draw covers for Horvitz, he also pencilled new stories as fillers in the interior. Unfortunately none featured Marvel characters, although I would have liked to see him working on a Human Torch or Ant-Man tale. 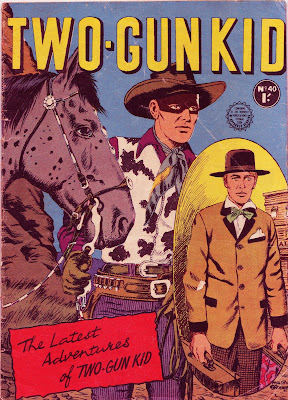 
In researching Bramley and Horwitz publishing, I discovered Danny Best wrote about him in detail on his blog some years ago, so I bow to his greater knowledge in this area and point you to those posts:

A talented artist who did exciting work outside of comics, Bramley transitioned into the business, bringing an unusual style and quality to his work. Bramley is another fascinating piece of the comic book puzzle, one that continues to unearth new areas of exploration.
Posted by Nick Caputo at 10:45 AM

I find that piece by Bramley to be rendered quite well.

I hesitate a little in using this word but it is really quite beautiful.

When comparing this to the original it's obvious that Bramley did not have to over come the burden of having less than half the page to work with. Kirby and Everett were restricted by their(or editorials?) decision to add what amounts to advertising on the right hand side of the original cover.

The city background in the Bramley suggest that he may have some back ground in commercial art?

I certainly would like to see more of this artists work!

Thanks for the introduction to Mr. Bramley, Mr. Caputo!

I have been following your blog since it began.

oops, sorry, just re-read your article and you do mention the fact that Bramley had a back ground in commercial art!

Thanks for the kind words. The links I added point to many examples of Bramley's work. He was quite talented and did some wonderful magazine illustrations.

I agree with you that Bramley was able to play with the layout on that DD cover and make it less cluttered. Many of his covers are not as bombastic as the originals, but his quieter style is also attractive.

Thanks again for adding your thoughts and i hope you continue to comment. Like Mr. Lee, I enjoy getting feedback and always try to reply to everyone (I remember being very disappointed when, for a time in the 1960s they printed letters without replies to save time. That didn't go over well, since the personal response wasvery important ot the fans)

Another winner, Nick. I've seen the Daredevil cover before, but never knew the artist's name.

When the Masterworks volumes first reprinted DD's origin, it wasn't from original sources, but a re-inked one of a very high standard. However, the linework did not entirely match the original, and when I mentioned this to Tom Brevoort, he denied it, saying that the story had been reproduced from really good original proofs. (He was mistaken - a side-by-side comparison reveals the differences.)

Marvel always had a problem with reprinting this strip - if you look at the presentation in Super-Heroes #1 (1966), you can see that a lot of the linework has dropped out in places. I wondered at the time if the original Masterworks version of the story had been taken from an Australian source, one that had been retouched by an Australian artist to bring it up to par for black and white reproduction. If so, it might be the very artist who was doing the covers you mention. Any thoughts on the matter?

Incidentally, the relatively recent softcover of the Daredevil Masterworks edition is the first time the story has been faithfully reproduced as it was in its original printing - maybe even better, in fact.

You are correct about the original DD Masterworks being touched up by another artist. I clearly remember when I first saw it that it was noticably and poorly replicated in places. Many of the faces and figures of Everett and Wood did not look anything like they should have,

I don't know if they used any of the australian reprinted work as I've never seen it. If anyone has that issue and can add anything, please do.

I'll have to take a look at that softcover reprinting.