If you've visited this blog in the past you won't be surprised by my fascination (some would say obsession) over editorial changes on artwork, both major and minor. This time out I'll delve into alterations on some early Marvel era Tales to Astonish covers. 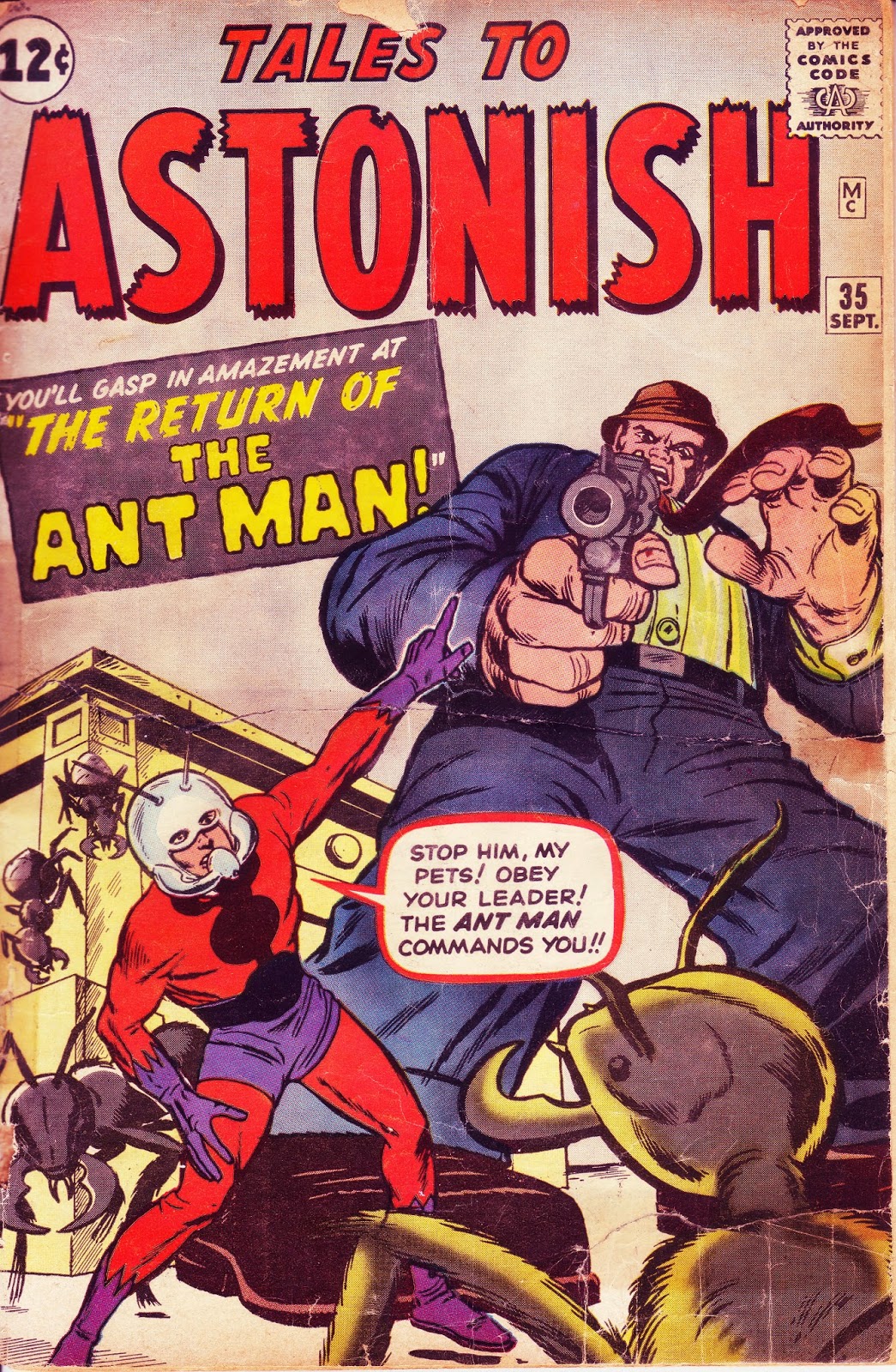 Henry Pym becomes a costumed hero after his miniaturized adventure in Tales To Astonish # 27 eight months earlier. Ant-Man was the only Marvel hero to spin-off from a Pre-Hero monster story and while he would occasionally face creatures like the Scarlet Beetle, more often than not he faced - excuse the pun - down to earth criminals, thugs and delusional scientists, aided by his loyal ants. Jack Kirby pencils; Dick Ayers inks; Stan Goldberg colors and Artie Simek letters, Tales To Astonish # 35, September 1962. 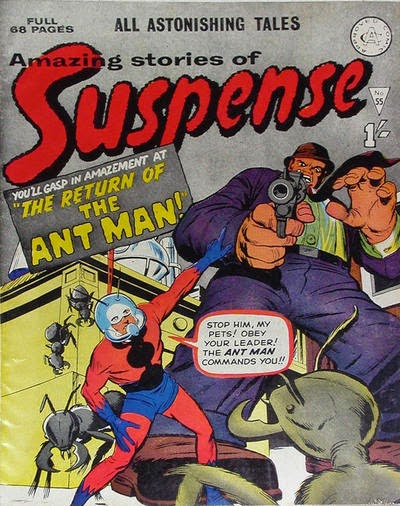 When this cover was reprinted in England the original stat was used. Changes are minimal but worth pointing out. The beakers on the desk and the wall vanished, while the hoods shoes were made darker. By eliminating background clutter the viewers eyes are focused on the main figures - Ant-Man, the criminal and the ants. Amazing Stories of Suspense # 55, Alan Class, circa mid-1960's? Image from the GCD.

Ant-Man underwent changes from his earliest days, gaining the ability to grow to great heights and acquiring a female partner, the Wasp (I felt the early stories had a charm that was not replicated when he became a towering giant, but being 5''7 I admit to a slight prejudice...) 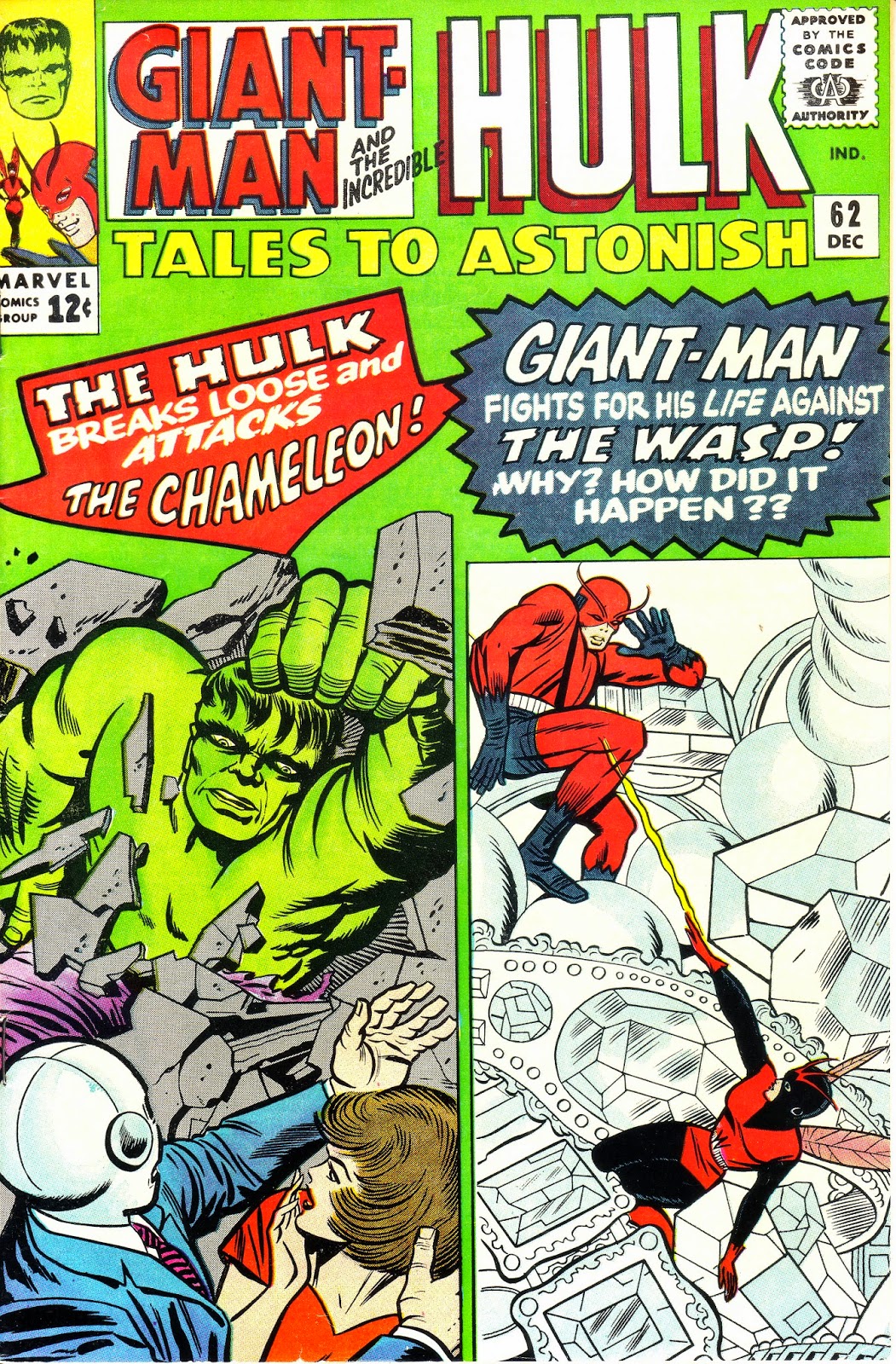 Chic Stone's vibrant inking over Jack Kirby's pencils was a centerpiece of the early Marvel era, particularly on the many covers he graced. Two issues earlier the Incredible Hulk was revived by Lee and Ditko as a co-feature in Astonish. The Hulk would soon overpower Giant-Man as the more popular character, and  Sub-Mariner would replace Giant-Man in the lead spot. 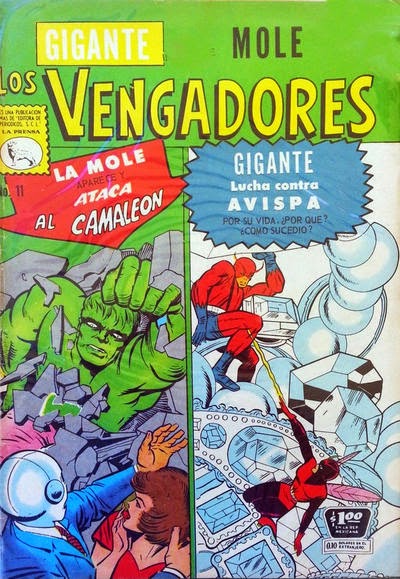 In Mexico Giant-Man and the Hulk stories were reprinted in Los Vengadores ("The Avengers")  # 20, June 1966. If you look closely you might notice the minor changes in the original version. Giant-Man's left arm is in a different position and holding up a jewel; his left leg is shaded. One of the diamonds near the Wasp is darkened and some touch-ups occurred on the Hulk's hair and bricks. In both versions there appears to be tinkering by other hands. The Wasp's mask and costume was likely altered to conform with her interior look (working at a breakneck pace Kirby often forgot the exact costume designs of every character). The necklace surrounding Giant-Man was probably inked by Kirby. My guess is that Stone inked the necklace without adding any lines, but Lee in his capacity as art director may have noticed that the necklace had no "weight" and asked Kirby to touch it up. Image from the GCD. 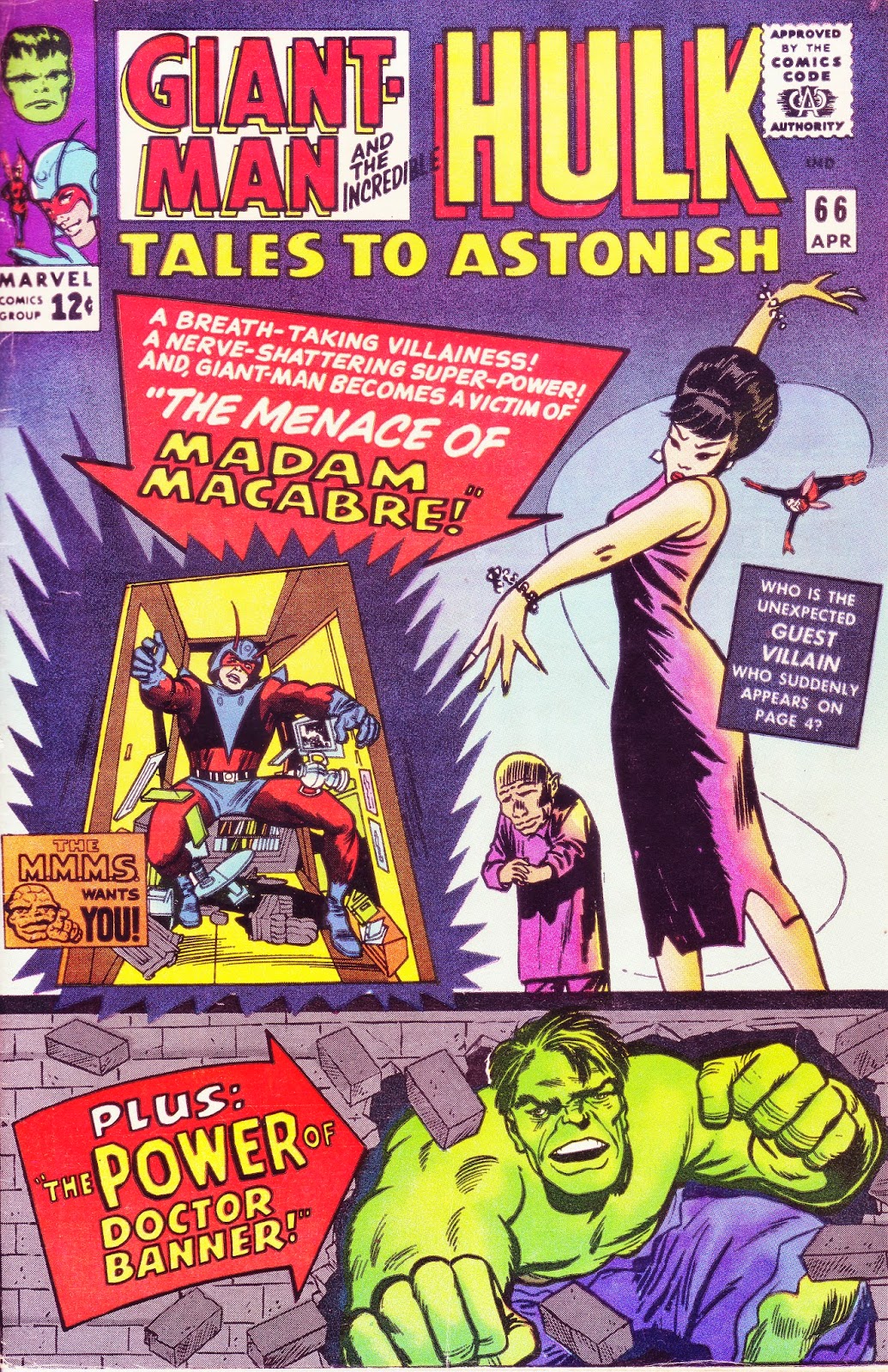 The cover to Tales To Astonish # 66 (April, 1965) is worth taking a detailed look at. A mixture of new art coupled with images from the interior story points to a cobbled together rush job. Covers were often produced after the interior stories were completed at Marvel, and this was clearly the case here. 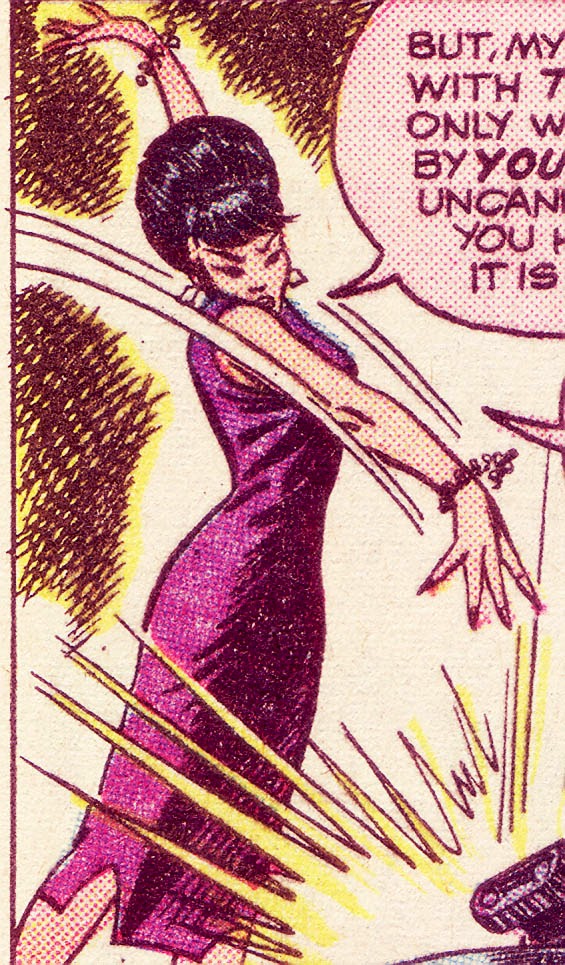 The image of Madame Macabre was a blow-up of the figure on page 3, panel 4. 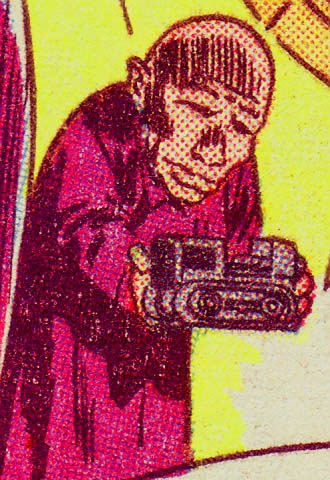 The figure of her assistant is taken from page 2, panel 6, with the hands redrawn. Interior art was by Bob Powell, with inking by Frank Giacoia. Powell was a talented and versatile artist whose work spanned an array of publishers, including Eisner and Iger, Street and Smith, Magazine Enterprises, Harvey, Charlton and Atlas, drawing western, war, jungle, crime, horror, romance and everything in between. His layouts on Giant-Man were particularly effective, emphasizing the characters size in ways others had not exploited. While his tenure at Marvel was short-lived, his artwork graced the Human Torch and Hulk strips,and he laid out or penciled a few attractive Daredevil's with Wally Wood. The inset figure of Giant-Man is particularly interesting and may provide a clue to the cut and paste cover art.  In this scene the hero is trapped in a room too small for him. The pencils are clearly by Jack Kirby, with inking by Chic Stone. Kirby and Stone apparently drew the Hulk figure on the bottom third of the cover. I suspect that the image of Giant-Man was reduced and originally intended to be the top half of the cover. If so, why did it become a cover within a cover? The answer may have to do with the previous issues cover scene. 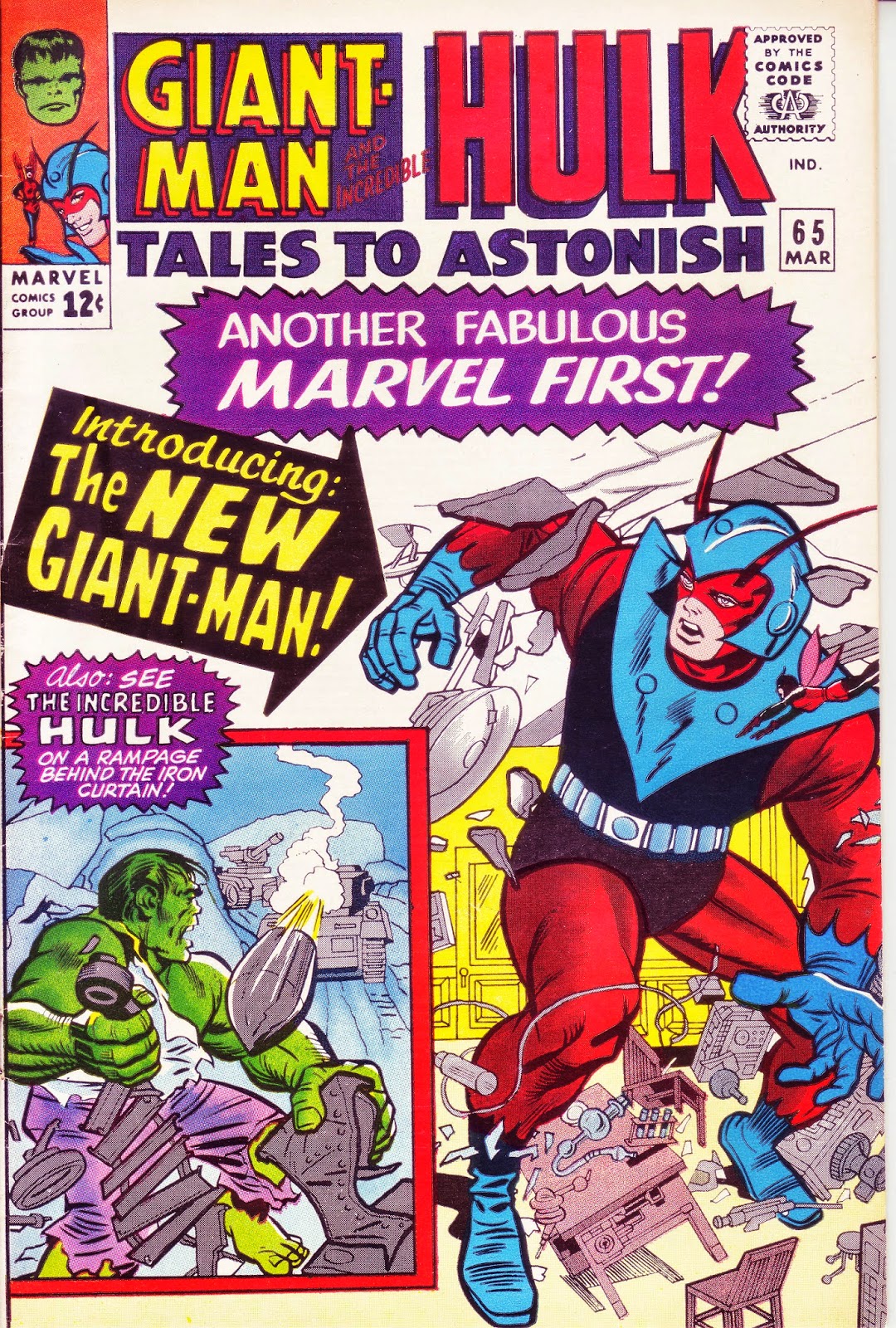 The Kirby/Stone Tales To Astonish # 65 cover which appeared a month earlier had Giant-Man in the same predicament, so either the image used for issue # 66 was an earlier version of this cover, or the same scene was duplicated in the following issue and Lee (or Publisher Martin Goodman) didn't notice the comparison until late in the game. An observation: Giant-Man was often depicted in positions of helplessness (as further examples will illustrate) and perhaps that is why the hero didn't catch on. How many kids want to see a superhero constantly weak and ineffective? This didn't happen with the Hulk!

... and to prove my point, what is Giant-Man doing on the cover of Astonish # 67 (May, 1965)?  Looking frightened and losing his grip as a little guy with a gun attacks him and the Wasp speeds to his rescue! Jack Kirby pencils; Chic Stone inks. 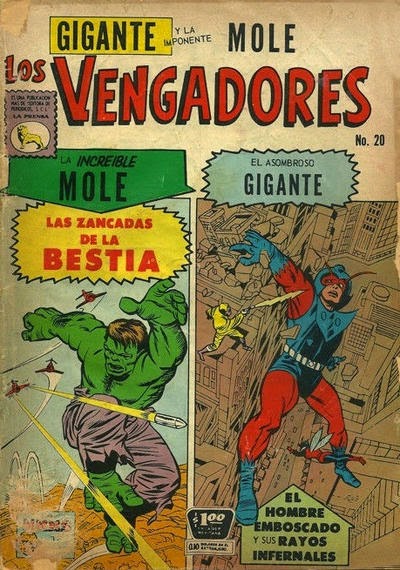 The original cover as published in Los Vengadores # 20, June 1966 has Giant-Man's legs straighter. The published cover has his legs altered, likely by Sol Brodsky, putting him in an even more precarious position. The Wasp is also re-positioned.  Image from the GCD. 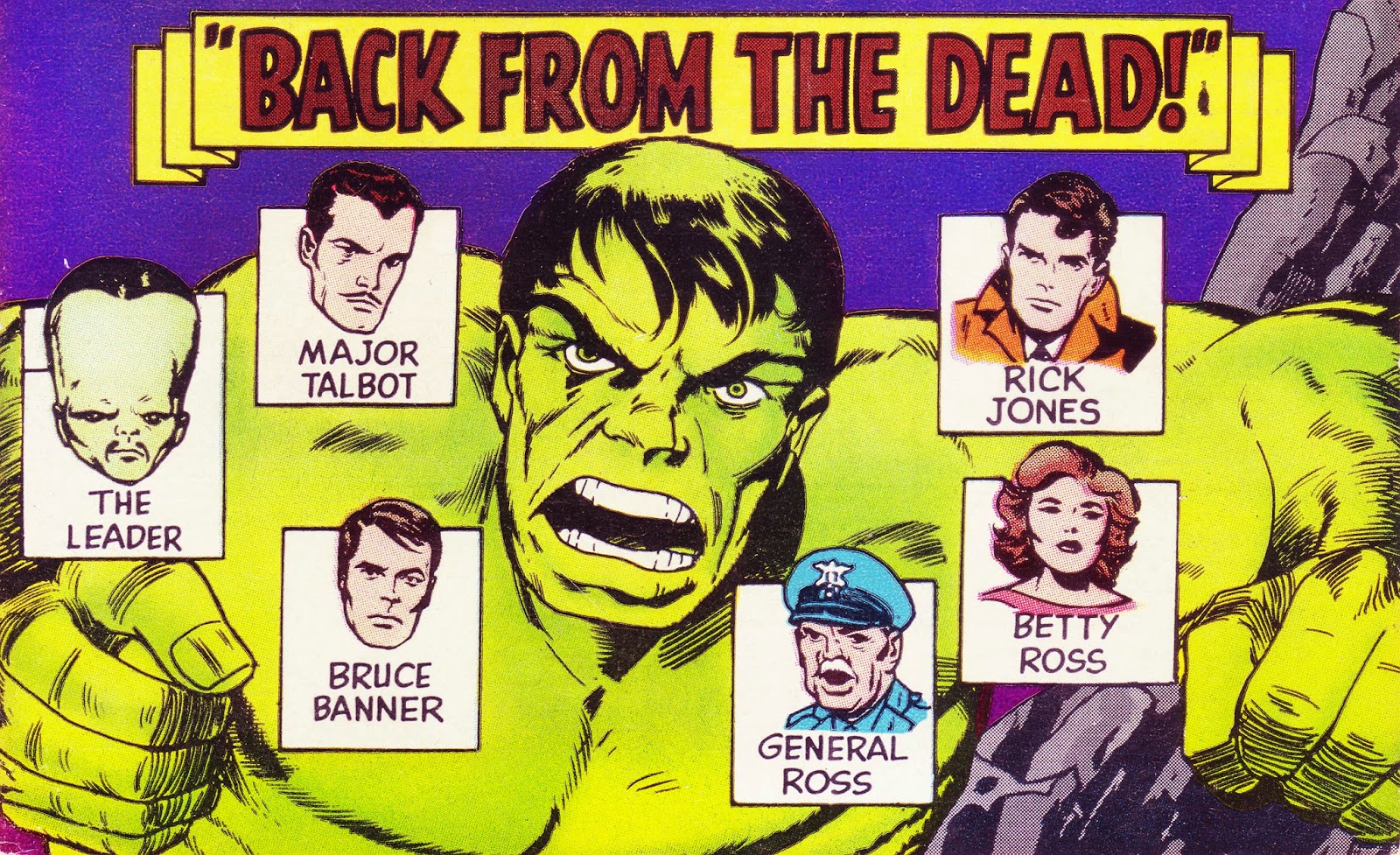 Tales To Astonish # 68 (June, 1965) is another piecemeal cover. the bottom tier featuring the Hulk and his cast of characters is by Jack Kirby and Vince Colletta. 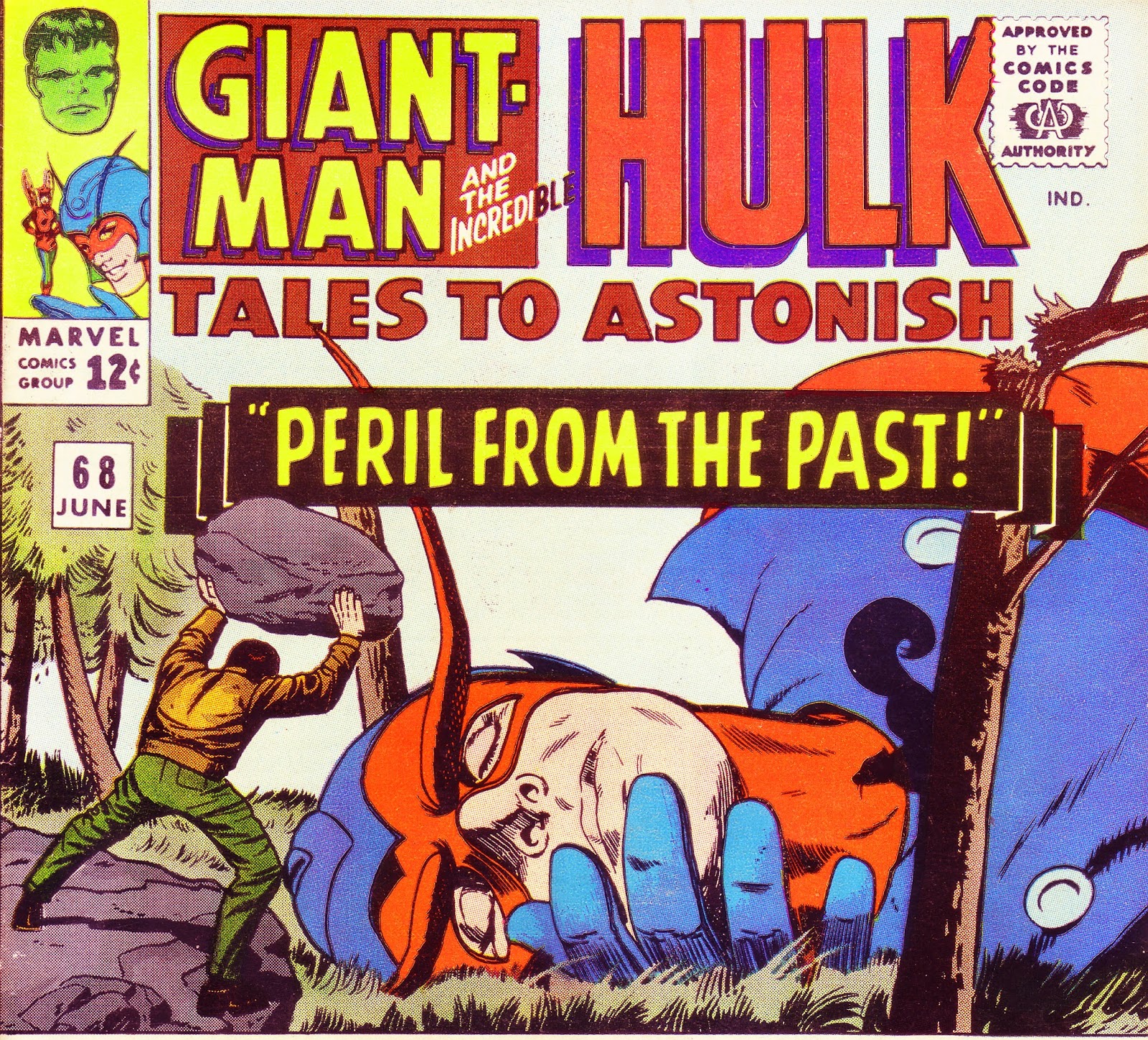 While the Hulk is poised to lash out and filled with rage, Giant-Man is unconscious and threatened by an ordinary man with a bolder! Is there any question why the Hulk became more popular? A hero that can tower over his opponents appears to be as efficient as Alex Rodriguez was on the New York Yankees!

The figure was taken from page 3, panel 1, with art by Bob Powell and Vince Colletta. The cover included a few alterations on Giant-Man and the figure of the man on the ground was replaced with a more menacing version. 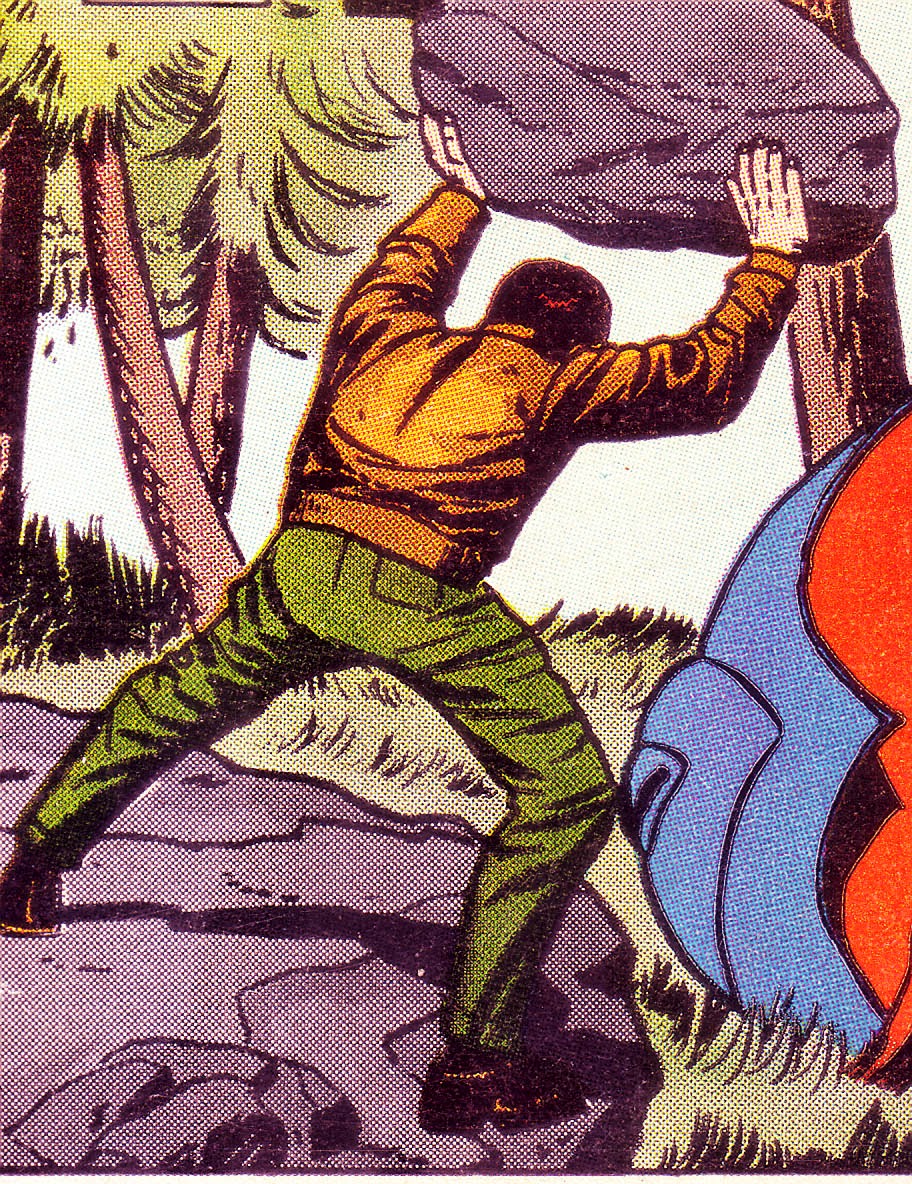 The cover figure was drawn by the same team who drew the bottom tier featuring the Hulk: Kirby and Colletta. Was there an earlier version of the Giant-Man portion of the cover by Kirby/Colletta? If so, why was it replaced? It's one of many ongoing mysteries that may never be answered.

Thanks! I so love to read this examination of the 60's clasics ( I was there!)
Mike

I'm glad you're enjoying the posts.

And I'm enjoying your posts too, Nick. Been too busy to comment before now as I've been attending to a certain matter. Keep up the good work.

I always appreciate your support, Kid!

Fascinating piece, though I have to confess I don't completely understand what a "stat" is (Googling it only confuses the issue!). Is it a piece of comic art submitted for review/approval?

I'm assuming that, in pre-software days, alterations were accomplished simply (well, probably not so simply in practice) by cutting and pasting sections of art? I so, comic artists were quite skilled in this area, given the absence of obvious "artifacts"--rough edges, give-away lines, though I'm sure the printing process itself aided in concealing paste-jobs, white-outs, text corrections, etc.

You've inspired me to do a post on a handful of Charlton/Class alterations in my collection, plus a few splash/cover changes committed within Charlton issues. The biggest Class/Charlton mystery I've come across is Class' reuse of the "Space War" No. 18 cover. Class' image is significantly wider than the original cover and splash, which suggested they had access to an uncropped original. But weren't covers usually pre-fit to order? Could these be an original stat that Charlton elected to trim?

So many comics, so many questions!

Correction: I meant to ask, "Could THIS (the Class reissue of the Space War No. 18 cover) be an original stat that Charlton elected to trim?"

Splash/cover trimming might make for an involved topic by itself!

A stat is a black and white version of the artwork. What apparently happened from time to time was that changes were requested by either the editor or publisher before the cover was approved and a second revised/altered stat or proof was created. Thus, there were two stats available and what apparently occurred from time to time was that, when a cover was reprinted years later the original stat was in the publishers possession and used (wittingly or unwittingly) by production instead of the published version.

Does any of this make sense or have I confused you more?

RE; the Alan Class Space War 18 cover, my guess is that Class may have added art to the borders due to a difference in size between Charlton's line and his titles. I believe I've noticed this on some of the Marvel/Atlas covers from Class.

Your explanation made sense! Thanks.

Great, Lee. Now explain it to me!!