In studying various inking styles over the decades, I've become familiar with the the distinctive fingerprints of many artists, in particular the early Marvel period. Jack Kirby was embellished by many very talented and individual inkers circa 1959-1963, including Chris Rule, George Klein, Dick Ayers, Steve Ditko, Sol Brodsky, Don Heck, Paul Reinman and George Roussos. There have, however, been a number of covers that look nothing like "the usual suspects". By comparing these covers to known Kirby inked work from the 1940s and 1950s I will attempt to dissect the stylistic tics that define Kirby's inking style on these early Marvel covers.


﻿
While folks like comics historian Mark Evanier believe that Kirby inked the cover to FF # 7 (and I wholeheartedly agree) I suspect that is just the tip of the iceberg, and since a blog is great for studies such as this, presented here, for the first time, is a look at what I believe are other Kirby inked covers. These examples present a fascinating glimpse into a rarely seen or appreciated aspect of Kirby's late 1950s and early 1960s artwork.
﻿﻿

Kirby is not known as an inker, and, unlike many artists, didn't like to complete the job because he felt any professional could get it right (and he was more interested in producing the next story). Nevertheless, I find his inking quite attractive. Kirby's inking lacks intricacy - in fact it is often sparse - and he pays little attention to fine points like fingers, but his brushstrokes are sharp, and his indication for folds on clothing, for instance, give a feeling of accuracy. There is an organic quality to Kirby's inking that more than makes up for the missing elements, and I'll illustrate some of those points on each cover.

Battle # 67 is the earliest Atlas era cover I've discovered that points to Kirby inking. Most of the Pre-Hero  covers in this period drawn by Kirby were inked by either George Klein, Chris Rule, Dick Ayers or Steve Ditko. This cover bears none of their signature styles. The face of the soldier, the folds of clothing, the hands and the background details (including the squiggle type line Kirby uses on one of the enemies helmets), are indicative of Kirby's known inked work.

This is the first Pre-Hero Monster cover I've attributed to Kirby inking. Everything looks as though it was inked as needed, with no frills added. The sharp lines that denote water are similar to Kirby's DC inked stories. It also looks as though a few additional blocks of ice were crudely added by another hand, either staffer Sol Brodsky or possibly Editor Stan Lee, who could have lent a hand in emergency situations. The pre-Marvel, early 1960s office was minuscule, so anyone might have assisted in this period.

The following month we have another Battle cover.I'm not entirely convinced Kirby inked this one; the style is a bit sharper and more involved than usual, akin to Frank Giacoia's brushwork. While Giacoia was not freelancing for Lee in this period it's always possible he was seeking work and Lee gave him a cover assignment. Some elements are similar to Battle # 67, including the line work on the soldier's face. I'd label this "possible Kirby inks" but I have doubts. 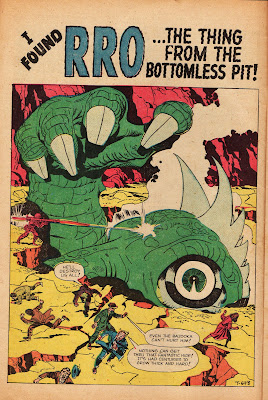 While Don Heck drew the rest of this seven page thriller from Journey into Mystery # 58, May 1960, Stan Lee had Kirby produce the splash page, likely replacing Don Heck's original version, which may have been deemed less dramatic. Kirby was, after all, king of the monsters! The technique here constitutes minimal details in the inking, so I wouldn't be surprised if Kirby rushed this one one while dropping work off to Lee in the office (and it still looks great!).

I originally credited Dick Ayers with the inking on this cover, but there are a number of distinctive Kirby tropes that made me reconsider. The line work on the folds of clothing, the squiggle on the wheel in the foreground, and the brushstrokes on the water are all typical of Kirby inking. 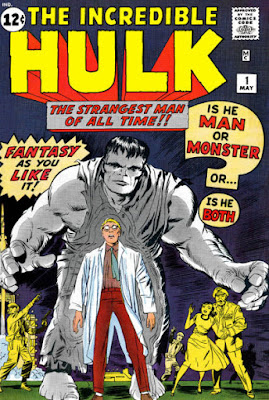 The Incredible Hulk # 1, May 1962. Image from the Grand Comics Database.


The Incredible Hulk # 1 has been attributed to a few inkers over the years, including George Roussos and Paul Reinman, but I'm "convinced" that Kirby is the actual inker. The sparse details, including the short strokes on Banner's clothing; the minimal detail on the Hulk's feet and face and overall simplicity shout Kirby to my eye. There is none of Roussos' heavy black inking, the finer line of Paul Reinman or Ayers' thickness in sight. I submit this important cover is inked by none other than Jack Kirby, probably because he was in the office and the job needed to be done. Back then the cover was just another job; no one knew that The Hulk would be a success let alone survive in comics and be recognized through movies and television 50 years later.

The following month featured this cover, generally ascribed to Paul Reinman or George Roussos. While the background figures are so small its hard to denote any distinguishing features, the robot has sharp, thick lines indicative of Kirby inking.

This is another cover that screams "Kirby" to me. The lack of any detail; only basic strokes to denote clothing folds, the simple hands and blocky inking on the Rawhide Kid's clothes, along with the way the buttons are drawn, bigger and closer together, add up to a simple but attractive cover. 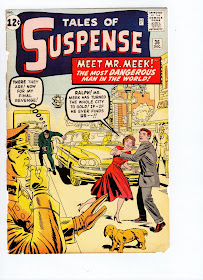 ﻿This Kirby fantasy cover clearly has the same distinguishing inking characteristics. Note the policeman in the foreground and the bare minimum of lines on his face and clothing  (and don't you just adore the dog!) 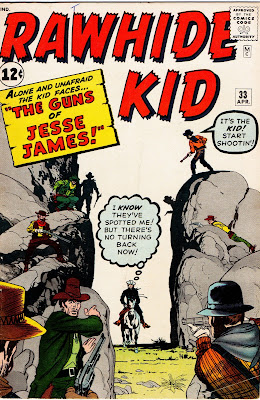 I long believed this to be an Ayers inked cover but upon closer examination, particularly the folds on clothing and the clipped strokes on hats and lack of definition, made me reassess this to be Kirby inking.

May 1963 cover-dated titles feature what I believe are a total of three Kirby inked covers. Stan Lee apparently handed out assignments in batches, so on a given month you would notice Paul Reinman or Sol Brodsky inking two or three covers, with another four assigned to Dick Ayers. My guess is that Lee needed these covers inked in a hurry and assigned them to Kirby, who, never a slow artist, was sure to complete the work on time.

While the cover of FF # 11 was altered in places, likely by Al Hartley (mainly the figure of Sue), the inking is another matter. In studying this cover some years ago I asked Dick Ayers if he inked it. He emailed me, informing me that his record books indicated it was not one of his covers. The coloring on the cover is very dark, making it hard to pick out details, but the un-detailed character faces, as well as the inking on the Torch, which is similar to his look on the Kirby-inked FF # 7, indicate Kirby as the culprit. 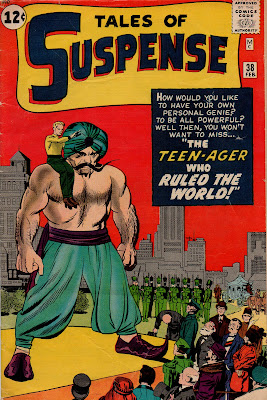 This cover has all the earmarks of Kirby inking. Notice the simple lines on the background figures, the folds of clothing and the slashing technique. This looks nothing like Ayers' work, nor the other inkers of the period. While it is true that Ayers followed Kirby's line closely in a few instances, it was highly unusual, Ayers' thickness of line is hard to completely miss.

Kirby had a particular way of inking machinery, mainly hard, sharp lines. The Ant-Man figure has little detail added to his costume, and the faces and figures of the pedestrians are also slight.


While the backgrounds are a little more distinctive and Ayers-like than Kirby's style, Loki's hands and costume barely have any black areas and Thor's helmet has a simple squiggle.﻿ Kirby probably also inked the smiling Thor corner trademark, which was soon changed.

Sgt. Fury # 3 is a cover on the fence with. On the Grand Comicbook Database the possibility of Steve Ditko inking this cover was brought up, and while I was initially skeptical, I clearly see him as a possibility. There are instances where Ditko literally traced Kirby's pencils, such as the "Giant-Man" story in Tales to Astonish # 50. The lack of definition in the hands and the outfits looks like typical Kirby inking, but there's something about Fury's face that has a touch of Ditko. 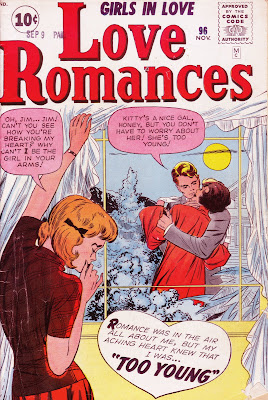 This is the only Kirby inked romance cover I've discovered thus far. The face and hair of the woman in the foreground has the distinctive Kirby touch. Is this Kirby's last "unknown" inked cover of the period? Stay tuned! 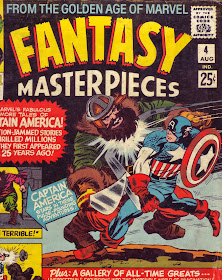 Detail to the cover of Fantasy Masterpieces # 4, August 1966


Fantasy Masterpieces # 4, which was advertised as inked by Kirby, was his last inking assignment for Marvel. In a business sense it was understandable. Kirby was too valuable as a penciller and had no interest in going over his pencils, but it would have been interesting to see how Kirby would have inked an entire issue of FF, Thor, Captain America or the Hulk.

Kirby's inking had a raw, unfinished feel that, while not technically perfect, packed a wallop similar to a two minute rock song: fast, furious and exuberant,